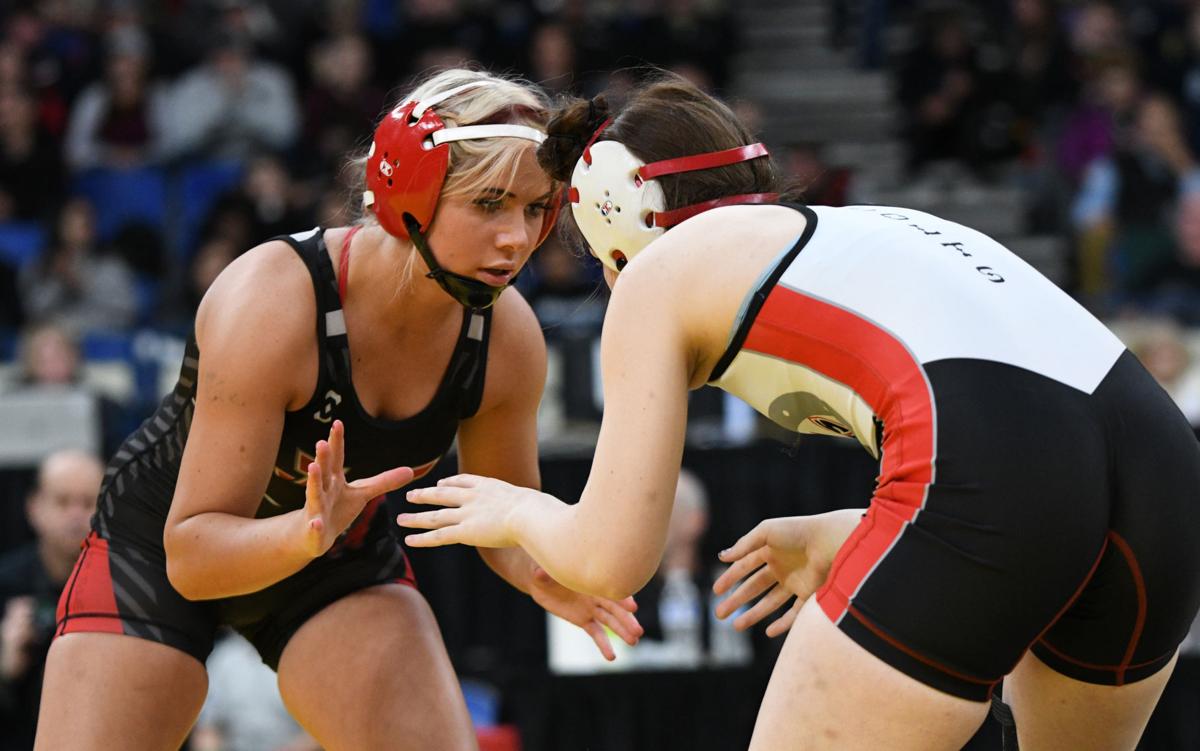 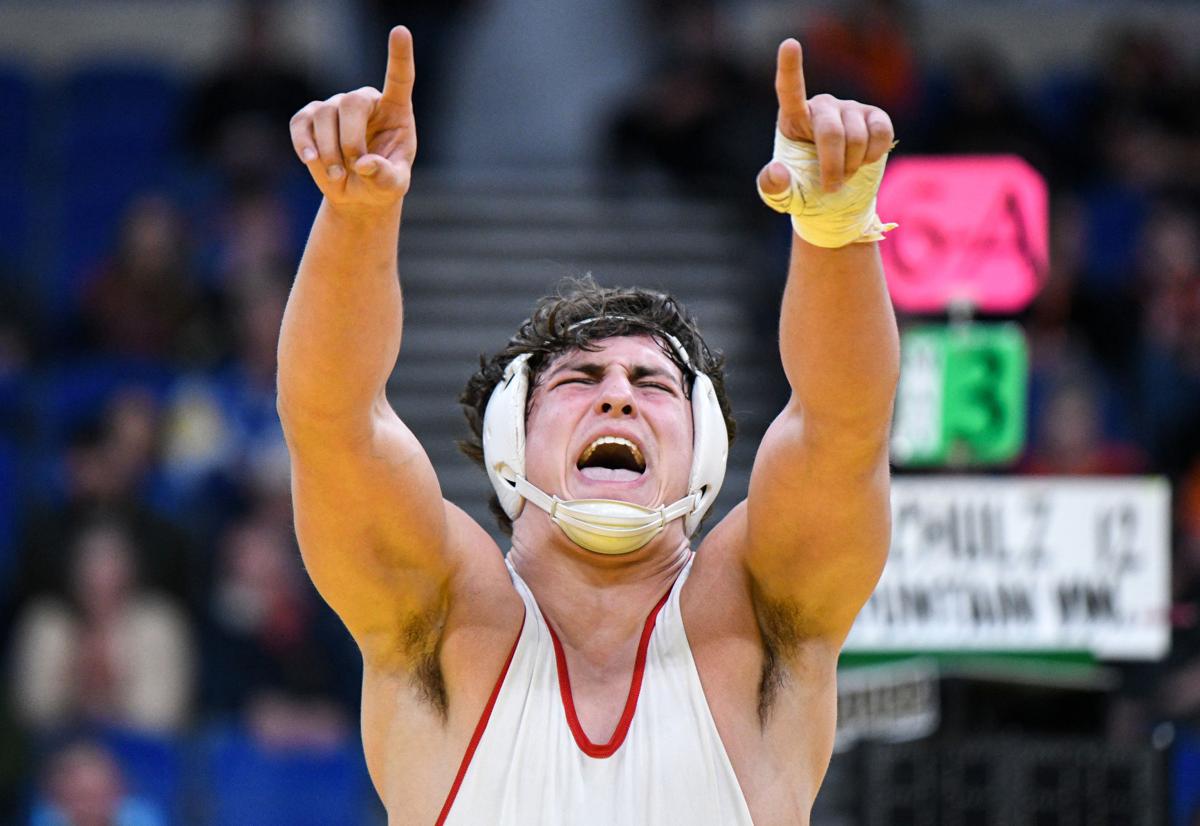 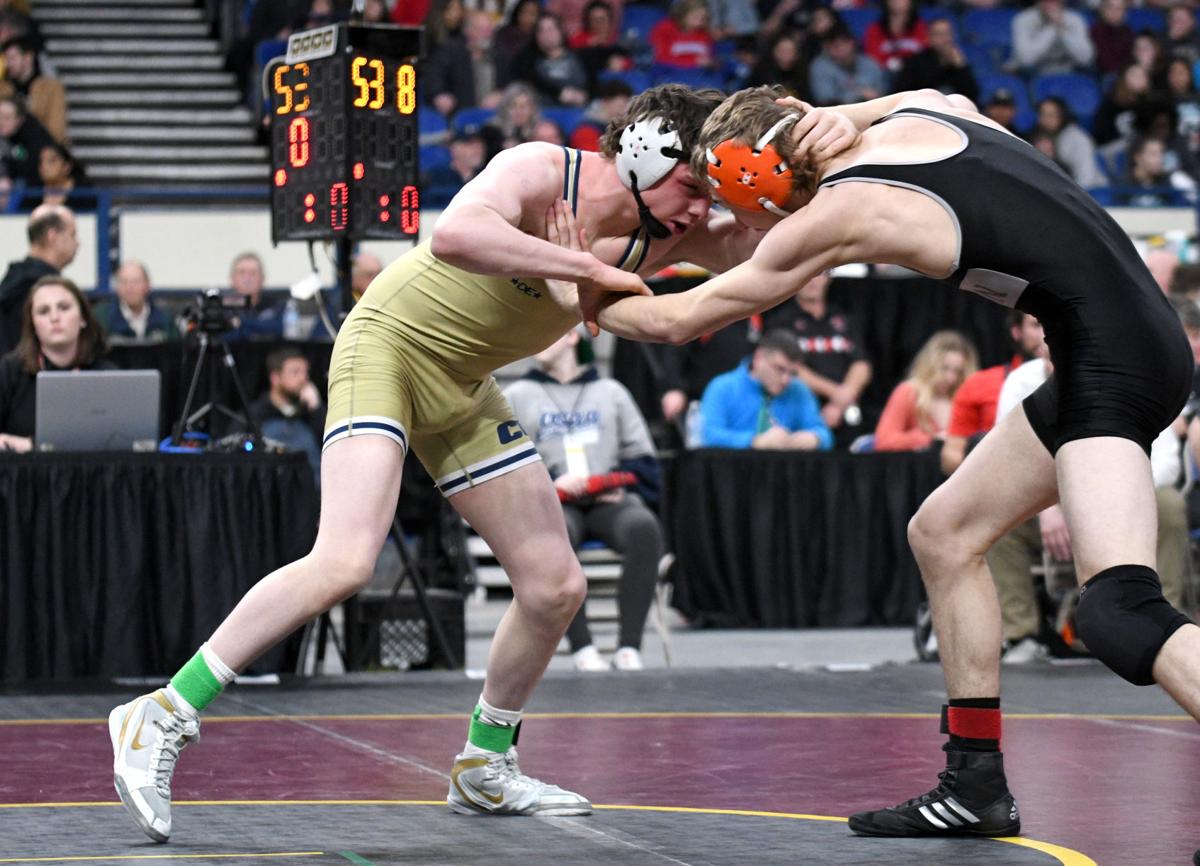 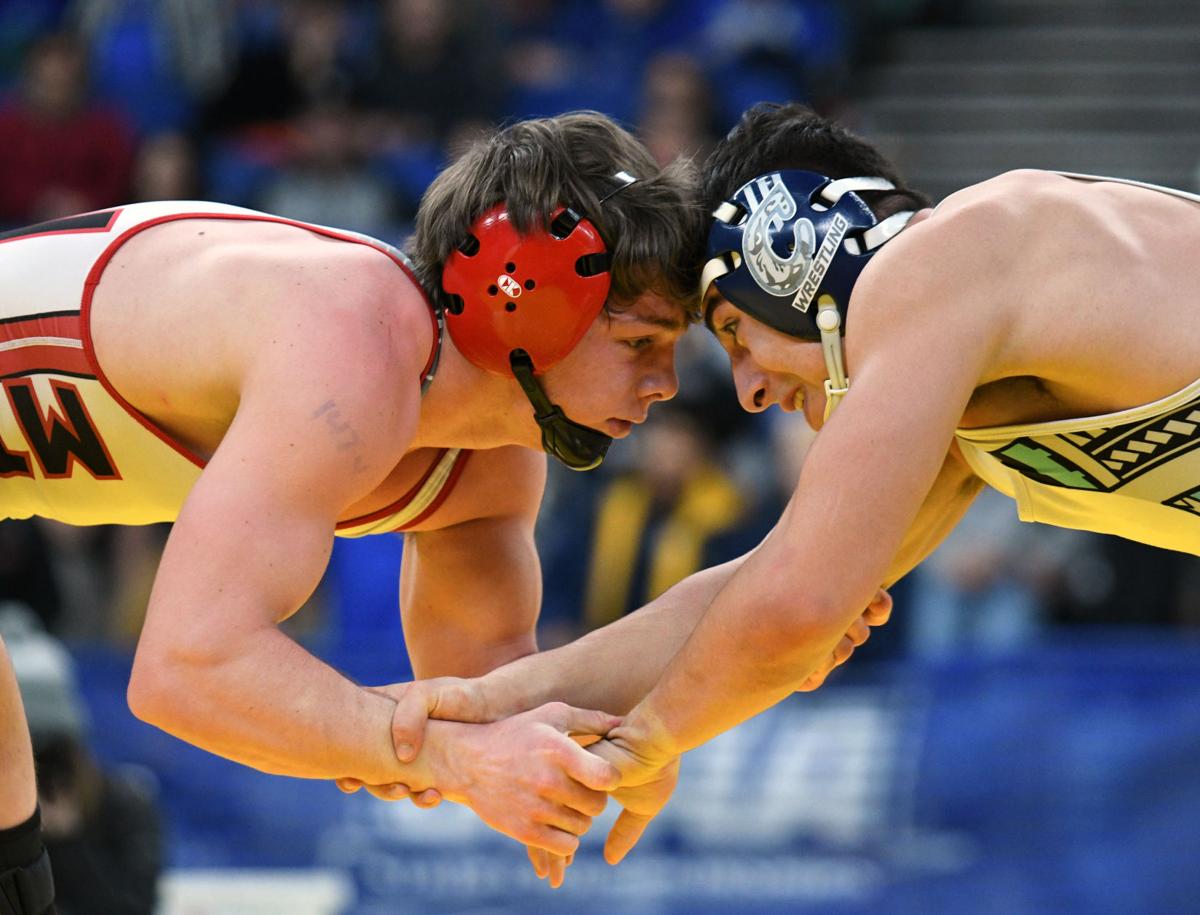 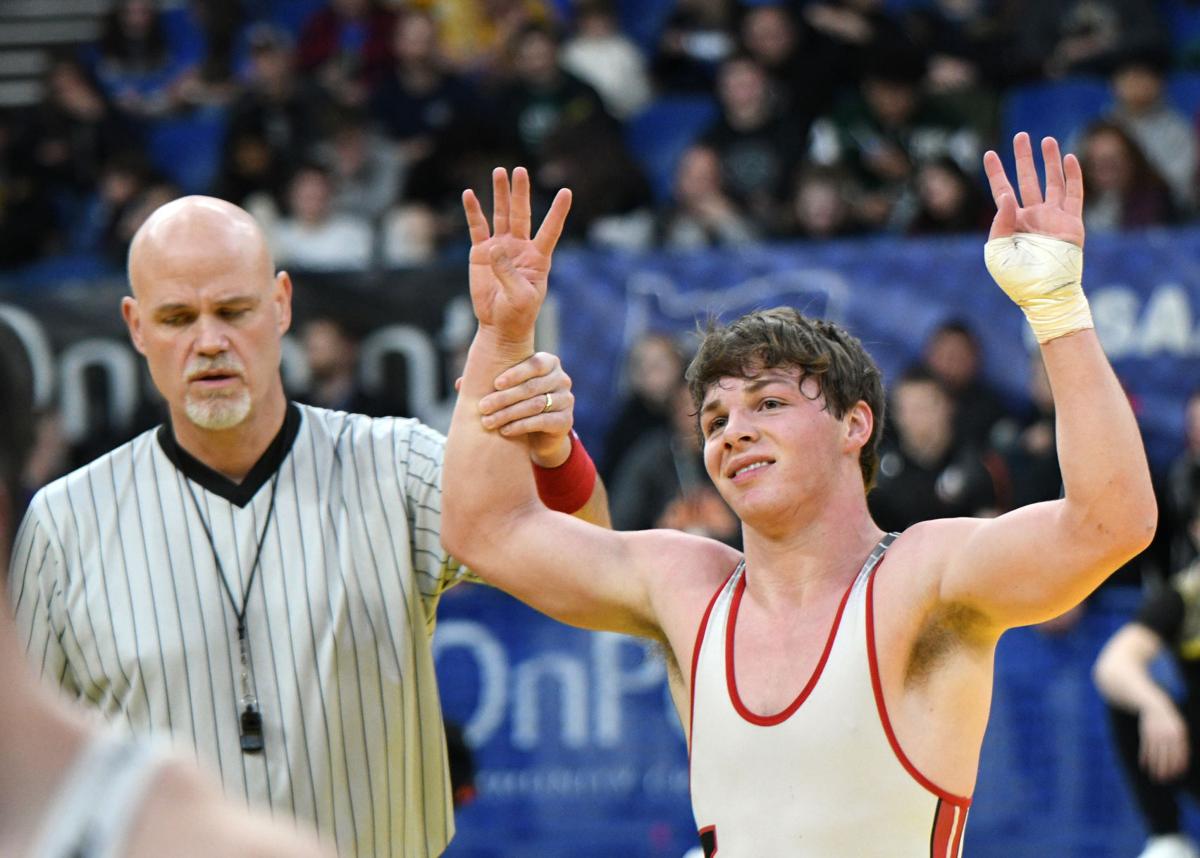 Mountain View senior Beau Ohlson has his arm raised in victory after winning his fourth state wrestling championship earlier this season. Ohlson was one of four Central Oregon high school athletes to be named a finalist for the 68th Oregon Sports Awards. 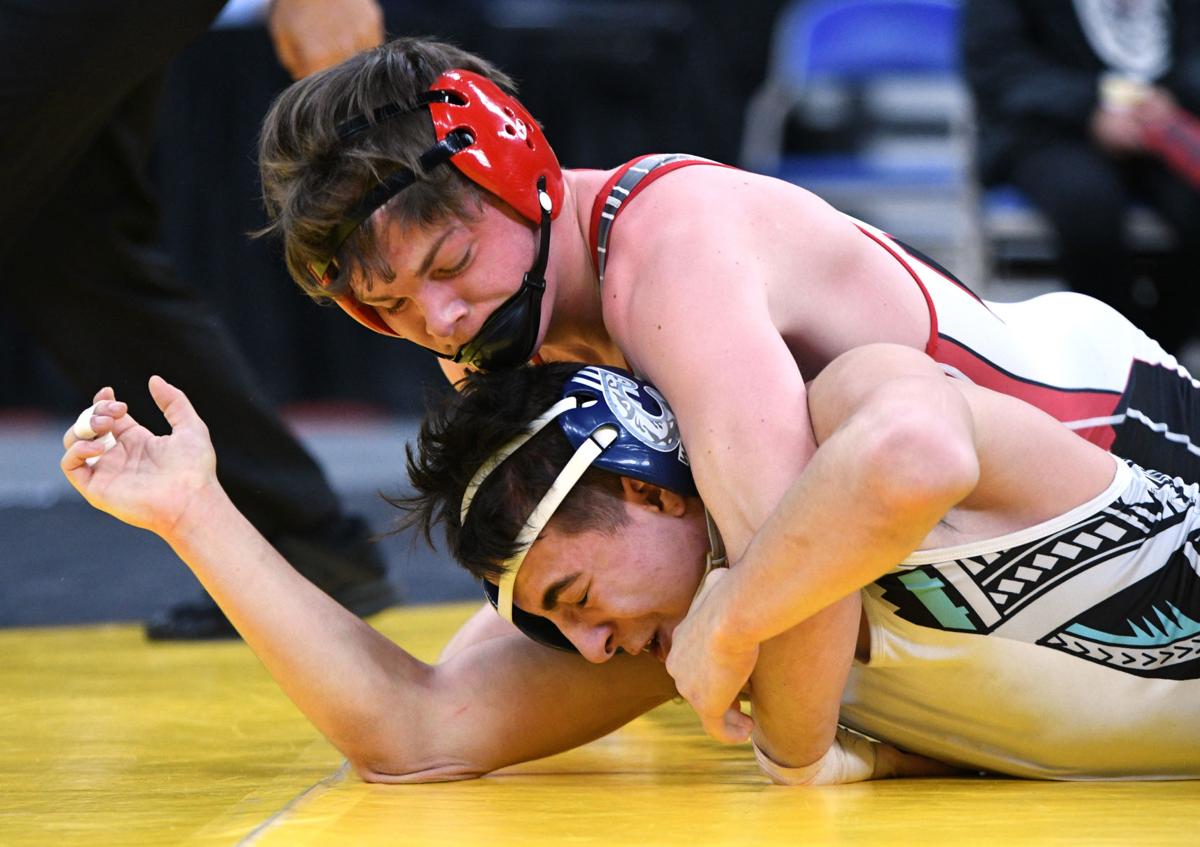 Mountain View senior Beau Ohlson has his arm raised in victory after winning his fourth state wrestling championship earlier this season. Ohlson was one of four Central Oregon high school athletes to be named a finalist for the 68th Oregon Sports Awards.

PORTLAND — It was a championship Saturday night indeed for six Central Oregon wrestlers at the high school state finals.

Two other Mountain View wrestlers were unexpected champions. Senior Titus Schulz was unseeded at 220 pounds but won his way through the bracket and beat Bryan Cuthbertson, the top-seeded senior from Sherwood, in an 11-7 decision in the final. Senior Taylor Ohlson, Beau’s triplet sister, was unseeded but finished as a champion with a 3-1 decision over Thurston’s Lindsay Burrell in the girls 135-pound final.

“I’m so psyched,” said Ohlson, who won two titles at Class 5A before Mountain View moved to 6A before his junior year. “This has been a dream of mine for years, a lifetime goal. I’m so very blessed to achieve it. It’s still just a blur to me, so it hasn’t hit me yet, but I know it will.”

Ohlson’s effort spearheaded Mountain View’s charge to a third-place team finish with 209.5 points, behind champion Newberg (310.5) and runner-up Roseburg (262.5), whose six-year reign as 6A state champion was halted.

Also in 6A, Bend High’s Denney, a semifinalist last year at 195 pounds, took the title at 182 with an 8-7 decision over Forest Grove’s Gavin Rice.

In the 5A classification, Crook County’s Mode, the champion last year at 126 pounds, won at 138 by pinning Crescent Valley’s Hayden Walters in the final. Mode was the top finisher for the Cowboys, who scored 226.5 team points and finished second to Crescent Valley (303) for the second year in a row.

Culver’s Downing, the 2A/1A champion at 138 pounds in 2019, stepped up a class and won at 145 by pinning Joseph’s Zab Ramsden in the final. But Downing was the lone individual winner for the Bulldogs, whose six-year run of team state championships was ended by Reedsport by a narrow margin of 106.5-103.

Culver had won 2A-1A team titles in 12 of the previous 13 years, a run that started in 2007, when the Bulldogs became the first Central Oregon team to win a state wrestling title in any classification since Crook County won the Class AA crown in 1975 under coach Russ Thurman.

In fact, this year marks the first time since 2006 that either Culver or Crook County (or both) did not win a state team title.