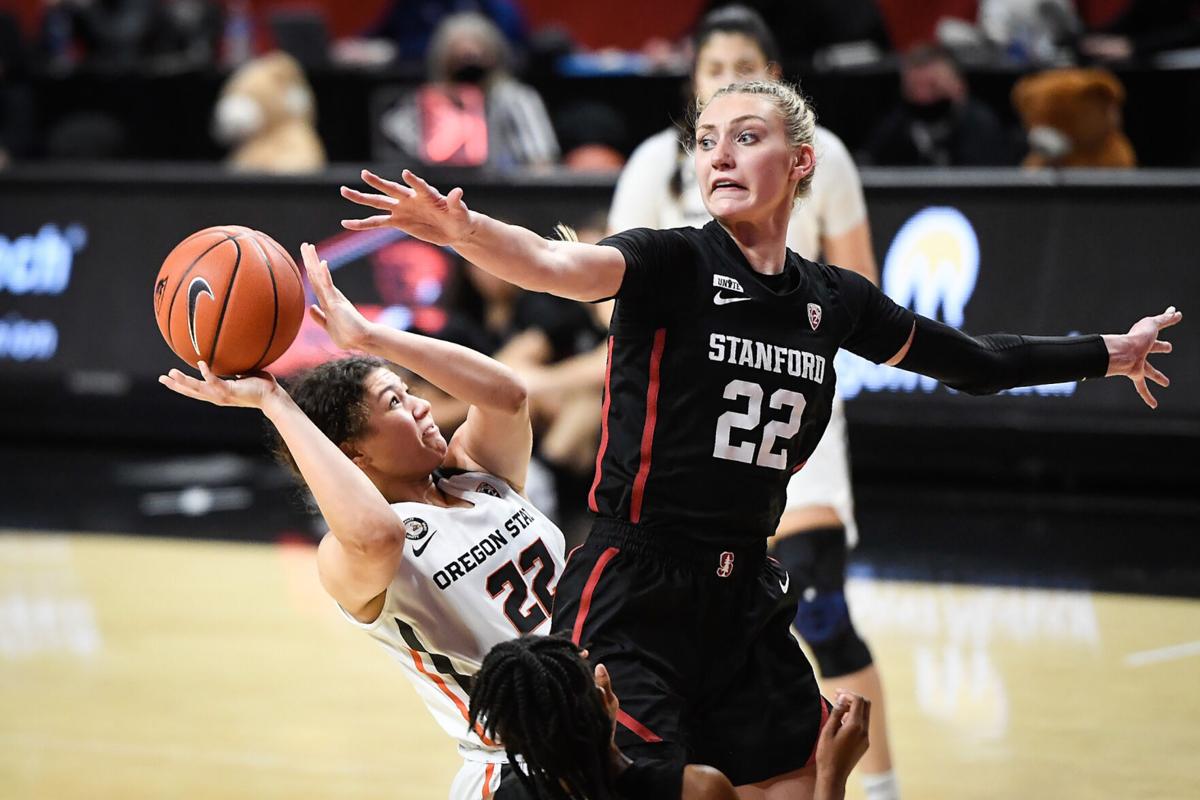 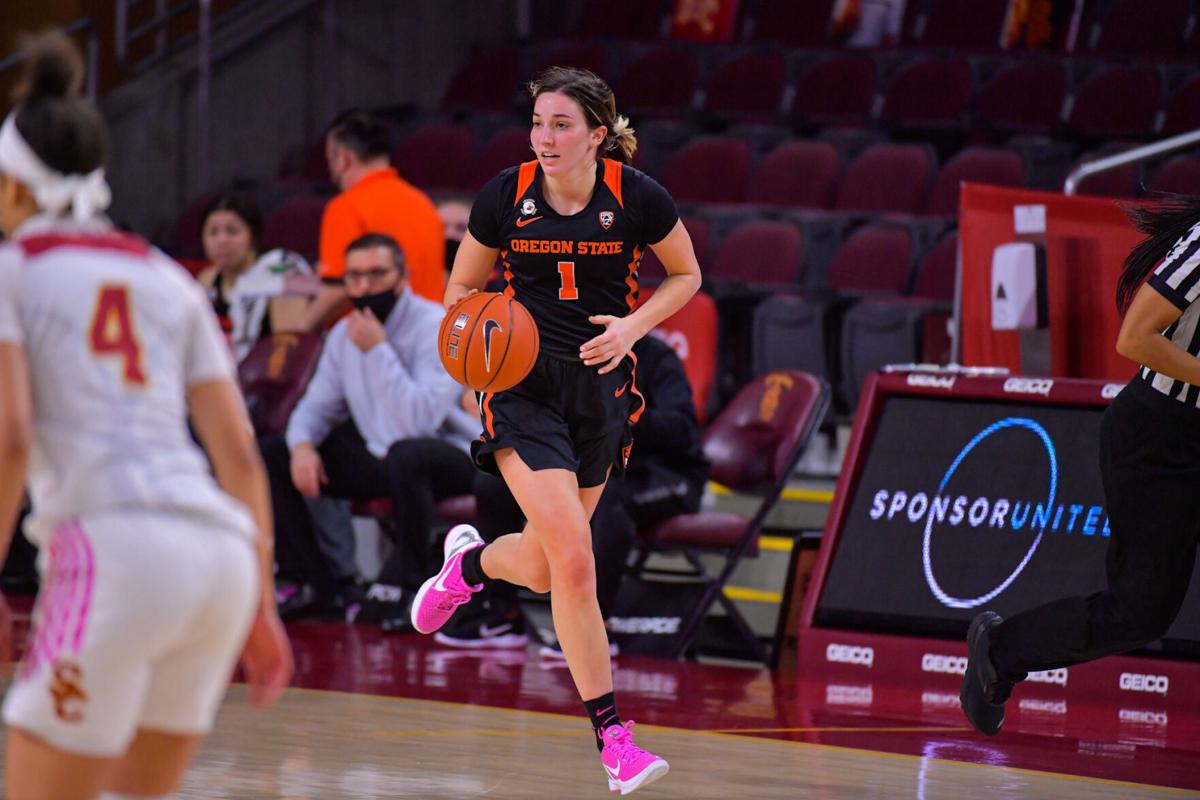 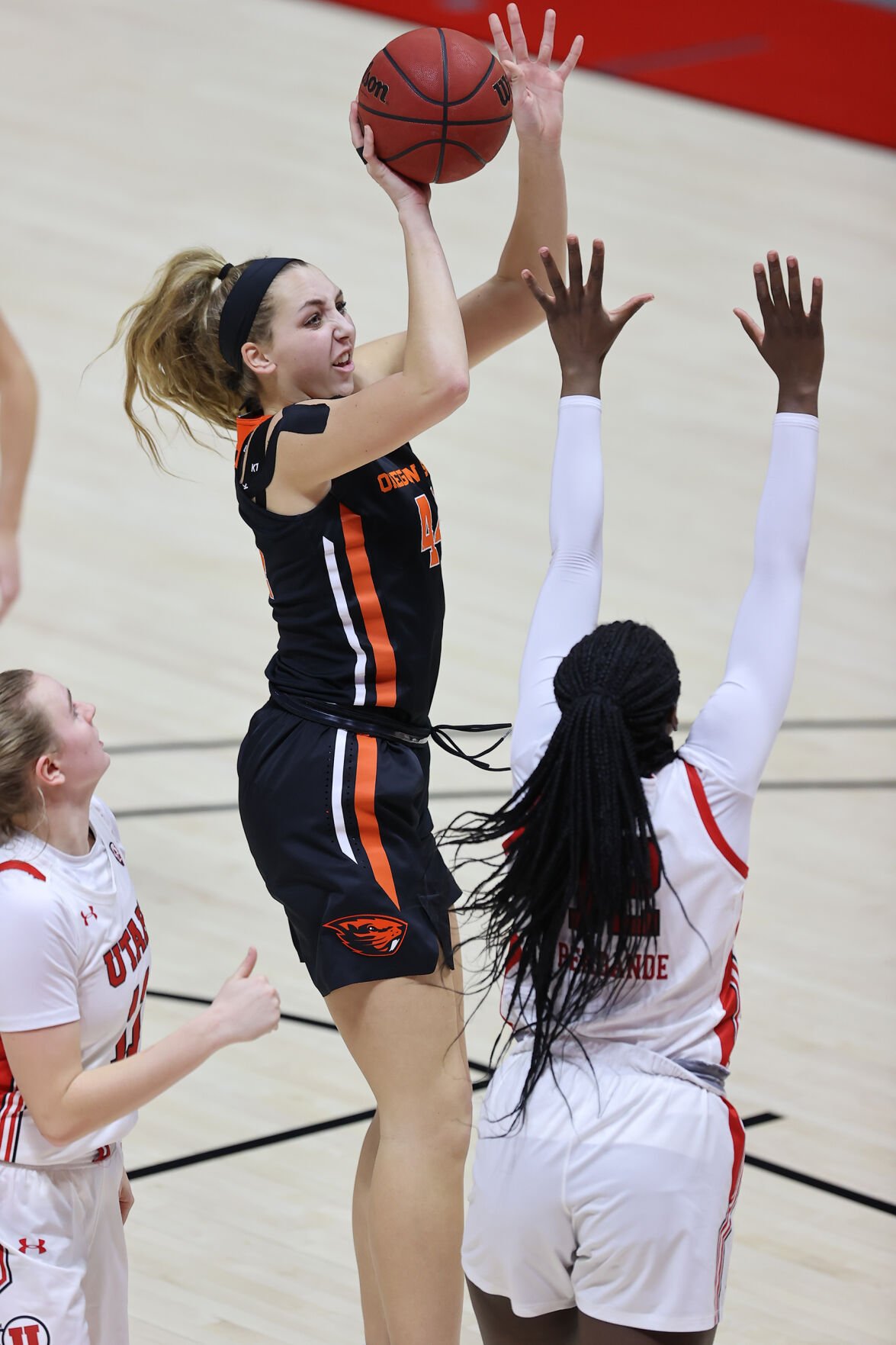 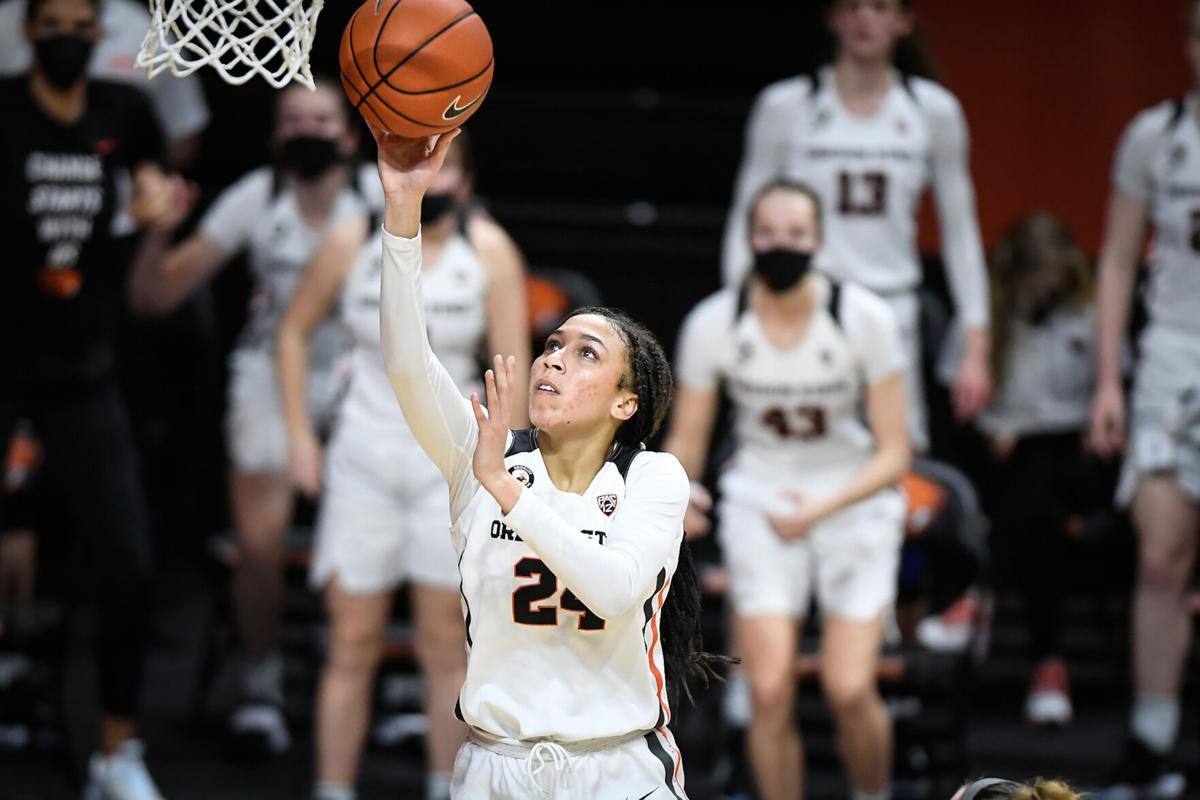 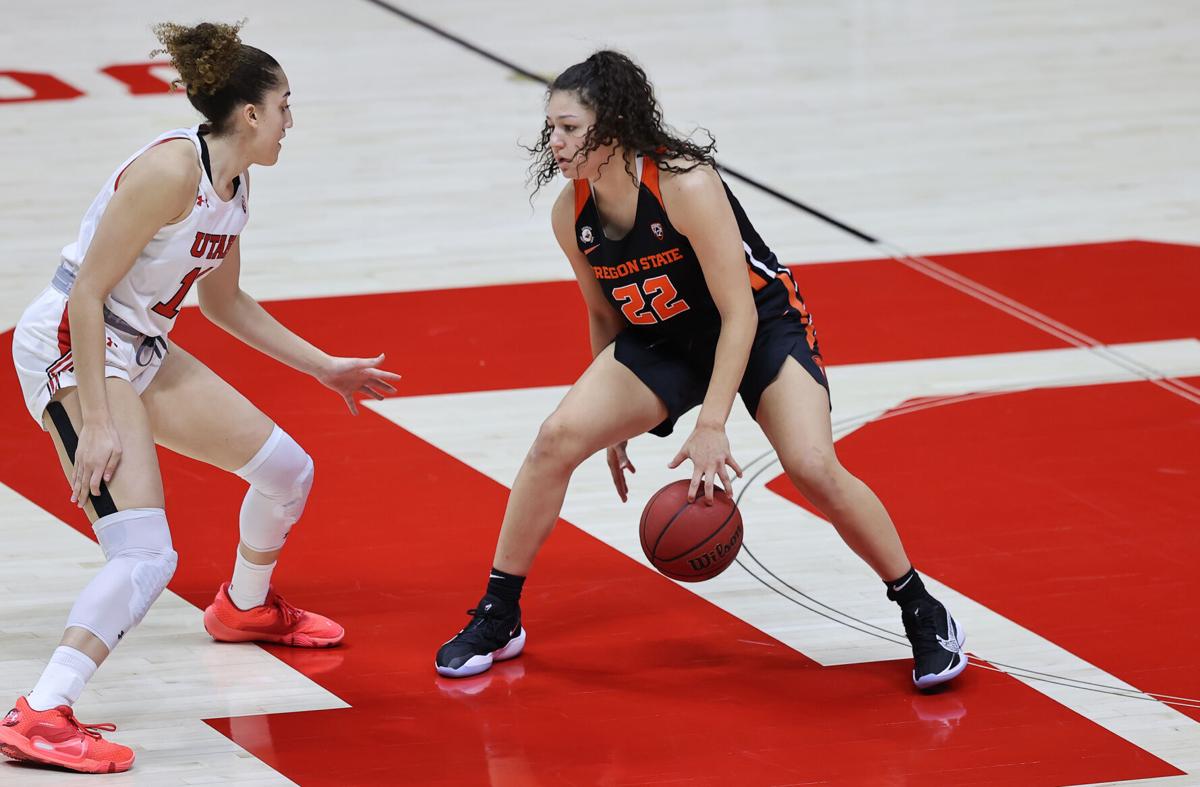 Oregon State’s Talia von Oelhoffen (22) looks for space around Utah’s Niyah Becker on Sunday, Jan. 31, 2021, in Salt Lake City. Von Oelhoffen has been a difference maker for the Beavers since arriving on campus mid-season.

Oregon State’s Talia von Oelhoffen (22) looks for space around Utah’s Niyah Becker on Sunday, Jan. 31, 2021, in Salt Lake City. Von Oelhoffen has been a difference maker for the Beavers since arriving on campus mid-season.

Seventy-seven days separate the games, but it doesn’t seem possible it was just over two months ago when Oregon routed Oregon State 79-59 .

The Ducks could have named the score on Dec. 13 in Gill Coliseum. It was that one-sided. Oregon was up 21 points at halftime, and led by as many as 29 points in the second half.

For Oregon State to make up that much ground and catch the Ducks, it seems the page would have to turn to next season. Yet here we are, in late February, and most following the programs have to say Sunday’s 3 p.m. game in Eugene is a toss-up.

Some might even look at the events in Pauley Pavilion last weekend and claim, advantage Beavers. On Feb. 19, then-No. 8 UCLA manhandled Oregon 83-56. Two days later, Oregon State led for more than 28 minutes and handed the Bruins a 71-64 loss.

Oregon State grew up. And added a big piece since the first Oregon game that completely changed the Beavers’ backcourt.

Both teams had inexperienced rosters heading into that Dec. 13 game, but the Ducks had a team full of 5-star freshmen and key transfers eager to show what they could do. Oregon outscored OSU 36-9 from 3-point range, and had 25 assists on 31 overall baskets.

It got worse before it got better for Oregon State. The Beavers lost to Washington State in Pullman on Dec. 19, then the following day put the program on pause for nearly four weeks because of a COVID-19 outbreak.

When OSU returned to action, it immediately lost to Arizona and Washington State, running the Beavers’ losing streak to a rare five games.

But along the way, the roster began to mature. Transfer forward Ellie Mack found her place. Freshman Sasha Goforth began to blossom on defense. Jelena Mitrovic, a 6-foot-9 center, became a key substitute. Senior guard Aleah Goodman emerged as one of the Pac-12’s top talents.

After sinking to 3-5 at one point, the Beavers have won five of six games heading into Sunday’s showdown in Eugene.

“It will be kind of a cool comparison because we were so fresh and new the first time,” Goodman said. “We’re finally getting into a little bit of a rhythm.”

COVID-19 has taken much away this basketball season, but in a weird way delivered a gift to the Beavers’ roster in Talia von Oelhoffen.

A senior at Chiawana High in Washington and a November OSU signee, von Oelhoffen opted to graduate early and enroll at Oregon State for winter quarter. She didn’t officially practice with the Beavers until four days before her Jan. 24 debut.

Von Oelhoffen has been beyond advertised. She has scored in double figures in five of seven games, including a career-high 19 points against USC. Between von Oelhoffen and Goodman, the Beavers are sure to have a dynamic lead guard on the floor for 40 minutes.

Much has been made of von Oelhoffen’s precocity, but Graves thinks it’s overrated. She’s a good college player, whether von Oelhoffen is 18 or 22.

“These kids are playing at a high level in club basketball. Her age, I don’t think it really matters,” Graves said. “She’s a good fit for them. She’s patient. She can really shoot the ball, she’s an excellent passer. She really plays well in their pick and roll.”

The adversity of 2020-21 hit Oregon State squarely in the jaw early this season. Rather than shrug and make the best of it, the Beavers adapted and flourished. OSU is 14 games into the season, and as coach Scott Rueck said, “in a normal year and normal amount of games we played for us, it would be about Jan. 10. We would have just played our first weekend in Pac-12.”

Nothing normal about this season.

“Obviously it’s not. It’s almost March, and because of that, there’s this massive urgency to grow quickly,” Rueck said.

Graves believes the lack of games has played in Oregon State’s favor. The Beavers have played Pac-12 front-runners Stanford, Arizona and UCLA once each, rather than twice like Oregon and other Pac-12 teams.

“They’ve had a lot of time to focus on them. They’ve done a great job. They look really good,” Graves said of OSU.

Sunday returns the series back to its uber-competitive nature of the past few years. The only thing missing are packed houses in Gill Coliseum and Matthew Knight Arena because of COVID-19.

“It’s not the way you want, for sure. The fun of this is going into a hostile arena,” Rueck said. “Unfortunately and sadly, we are getting used to it. But it’s certainly not nearly as fun.”