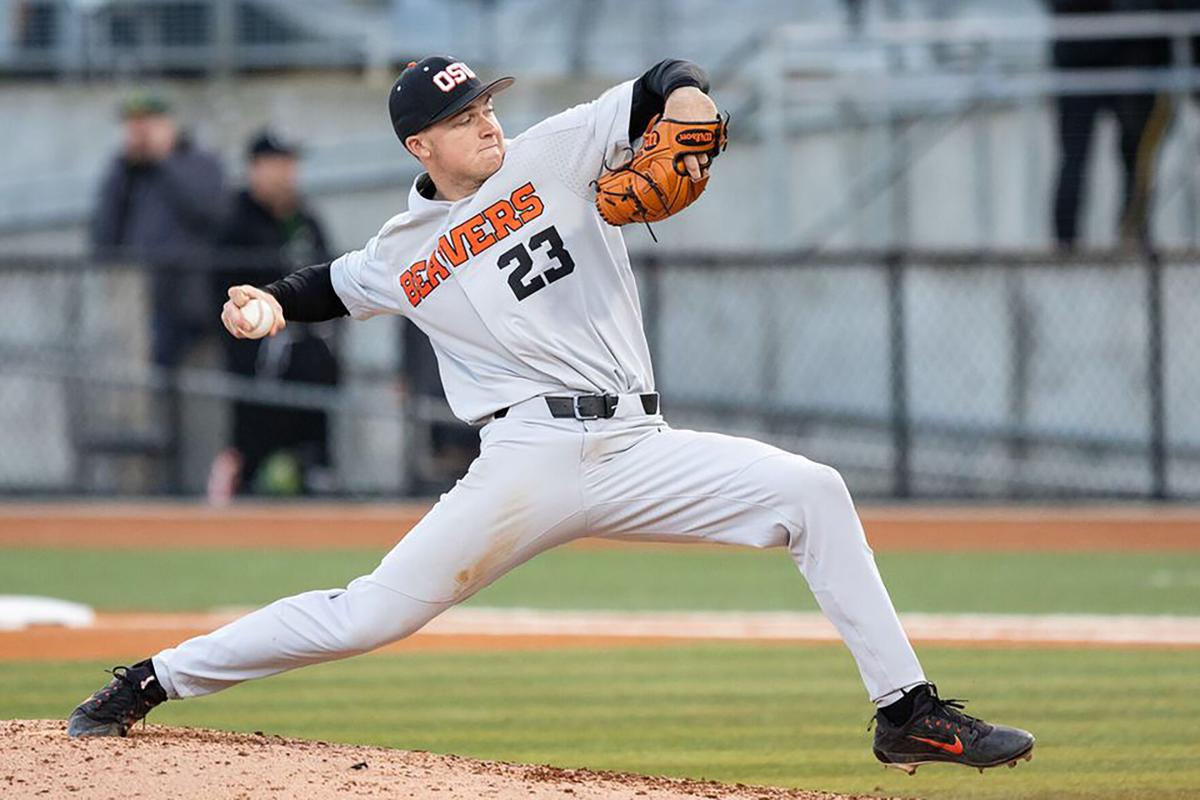 It’s been roughly 22 months since Oregon State right-hander Kevin Abel underwent Tommy John surgery on his million-dollar right arm. But time and rehab have only managed to reinforce his resolve and repertoire. The Beavers kick off the 2021 season on Friday in Surprise, Arizona, against Kansas State. 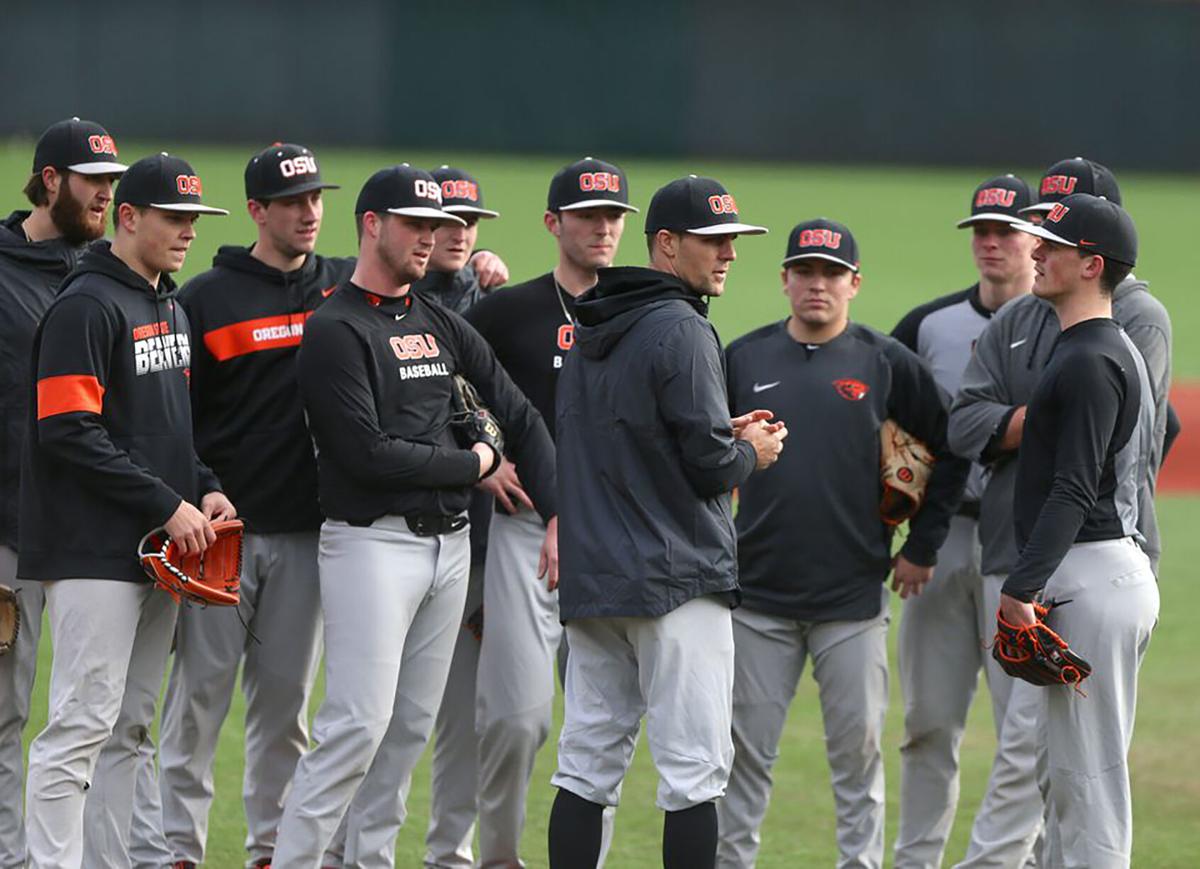 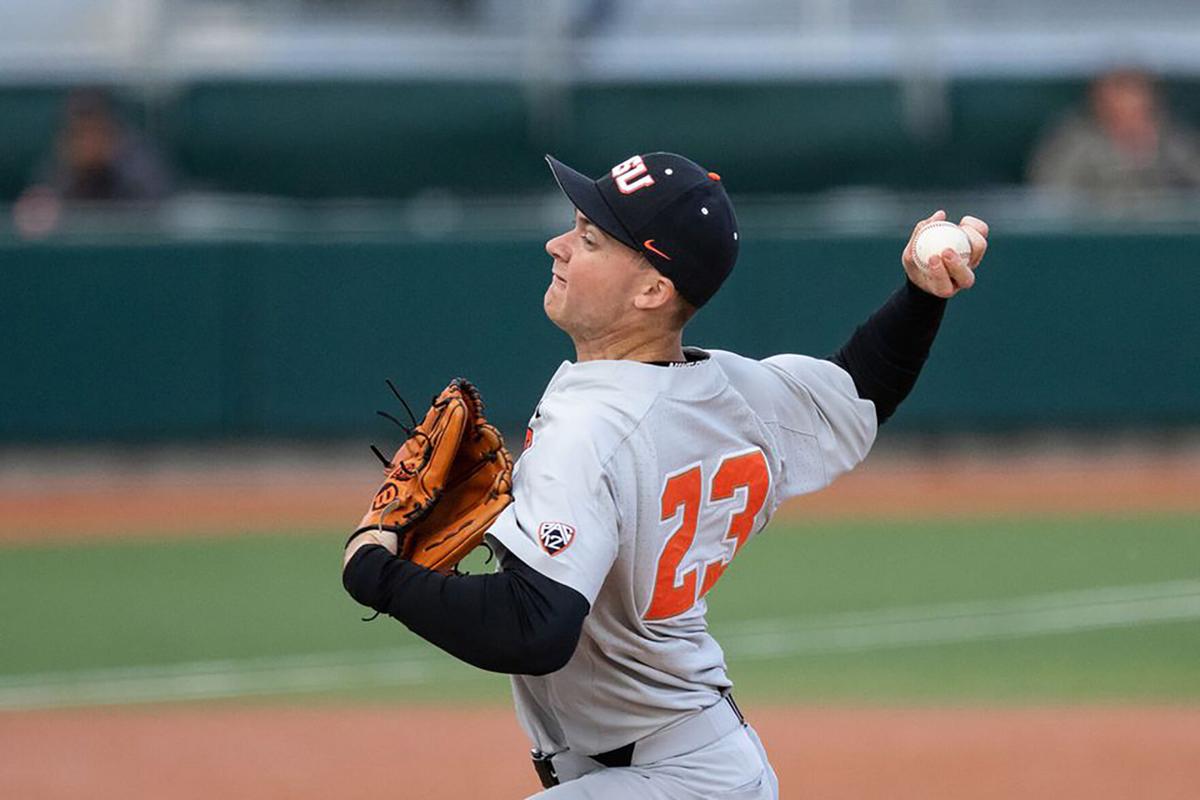 Oregon State's Kevin Abel throws a pitch in practice. After 11 months of coronavirus delays and uncertainty, the Beavers make their eagerly anticipated return on Friday in the opener of the Sanderson Ford College Baseball Classic in Surprise, Arizona, against Kansas State.

It’s been roughly 22 months since Oregon State right-hander Kevin Abel underwent Tommy John surgery on his million-dollar right arm. But time and rehab have only managed to reinforce his resolve and repertoire. The Beavers kick off the 2021 season on Friday in Surprise, Arizona, against Kansas State.

Oregon State's Kevin Abel throws a pitch in practice. After 11 months of coronavirus delays and uncertainty, the Beavers make their eagerly anticipated return on Friday in the opener of the Sanderson Ford College Baseball Classic in Surprise, Arizona, against Kansas State.

After 11 months of coronavirus delays and uncertainty, the Oregon State baseball team will make its eagerly anticipated return on Friday, when it plays Kansas State in the opener of the Sanderson Ford College Baseball Classic.

It will be the Beavers’ first game since March 8, a few days before the college baseball season was canceled as the first wave of the pandemic swept through the United States. All but two players are back from last year’s team, and the Beavers, who were picked to finish fourth in the Pac-12 in a preseason poll of conference coaches, say they are as deep and talented as ever.

The biggest headline ahead of Friday’s opener, which is scheduled to begin at 11 a.m. in Surprise, Arizona, is the anticipated return of ace Kevin Abel. The 6-foot-1 righthander will start for the first time since undergoing Tommy John surgery 22 months ago, and he says his stuff is “better” than it was before his injury. The Beavers’ lineup, which returns all but one player from last season, also figures to be improved.

Here are a few things to keep an eye on as the Beavers open the season in Arizona:

The Beavers will play four games in as many days at the Sanderson Ford College Baseball Classic, facing New Mexico (twice) and Gonzaga in addition to Kansas State. The games will not be televised, but all four will be streamed live on FloSports, an internet event streaming service. For more information and to signup, visit flosports.tv.

The Beavers’ first crack at a weekend rotation has been settled, as hard-throwing lefthander Cooper Hjerpe and sophomore righthander Jake Pfennigs will follow Abe in the first three games, coach Mitch Canham said.

Hjerpe, a 6-2 freshman, made six relief appearances for the Beavers in 2020, striking out 16 in 12.0 innings. His best outing came at Mississippi State, where Hjerpe recorded four strikeouts in 31/3 scoreless innings to earn his only win. He’ll start against New Mexico on Saturday. Pfennigs, a 6-6 sophomore who started four games last season and finished 2-3 with a 3.57 ERA, will start Sunday against Gonzaga.

The Beavers’ fourth starter, which remained undecided two days before they departed for Arizona, is still a mystery, although Nathan Burns and Will Frisch are likely in the mix.

“We’re going to work through that fourth spot,” Canham said. “Got an idea, but we’re not there yet.”

What is clear, Canham said, is that pitching coach Rich Dorman is prepared to go deep into his bullpen and won’t shy away from experimentation during the Beavers’ two-week trip to Arizona. They will play eight games in 10 days, and 16 pitchers are on the 35-player travel roster. It’s not out of the question that all 16 will toe the rubber at some point.

Canham said he’ll err on the side of caution early in the season and refrain from extending his starters deep into games, which, as a result, should led to more work for the bullpen. Ideally, Canham said, his key relievers will see at least two appearances in each four-game set.

“I think the game, the inning, the score, the matchups all dictate that,” Canham said. “Any of the guys that are going to be traveling right now, I’d be very confident with the ball in their hand.”

As for the back end, with senior Jake Mulholland and junior Mitchell Verburg, Oregon State features one of the best lefty-righty combinations in the Pac-12. Mulholland, who saved eight games in 2019, figures to get first crack at the closer role, but Canham said he is not married to a traditional one-closer system. Verburg, who is finally healthy after two elbow surgeries, has four career saves and nasty stuff, and likely will see his share of save opportunities, too.

The threat of COVID-19 has affected virtually every aspect of the 2021 college baseball season, but the Beavers have been largely protected by their Corvallis bubble. That changed when they departed for Arizona on Thursday.

Oregon State has implemented a series of new travel protocols to safeguard against the coronavirus, which has included extra planning ahead of its first trip in 11 months.

The list of new guidelines is extensive and includes everything from practice planning to eating to sleeping. Hotel rooms and airplane seats will be assigned, as much as possible, based on whether players live together in Corvallis.

All the while, the entire travel party will undergo testing once or twice a week.

“Keeping the guys healthy so they can go out there and compete is extremely important,” Canham said. “It’s high on our priority list. ”

The NCAA dismissed roster-size limitations for the 2021 season because they granted an extra year of eligibility to Division I athletes amid the pandemic, so the Beavers have 45 players listed on their roster — 10 more than normal. But Canham said they will continue to travel with just 35 players.

Abel hasn’t throw a pitch yet this season, but he’s already generating postseason award hype. USA Baseball announced on Thursday that Abel has been named to the watch list for the 2021 Golden Spikes Award, giving annually to the top amateur player in the country.

It’s the ninth time in the last 10 seasons that Oregon State has had at least one player on the watch list. Catcher Adley Rutschman won the award in 2019.

Abel, who gained national acclaim by winning four games in the 2018 College World Series, is 10-1 with a 3.04 ERA in his college career. Before undergoing season-ending surgery in April 2019, he had appeared in 972/3 innings, recording 133 strikeouts and holding opponents to a .175 batting average.