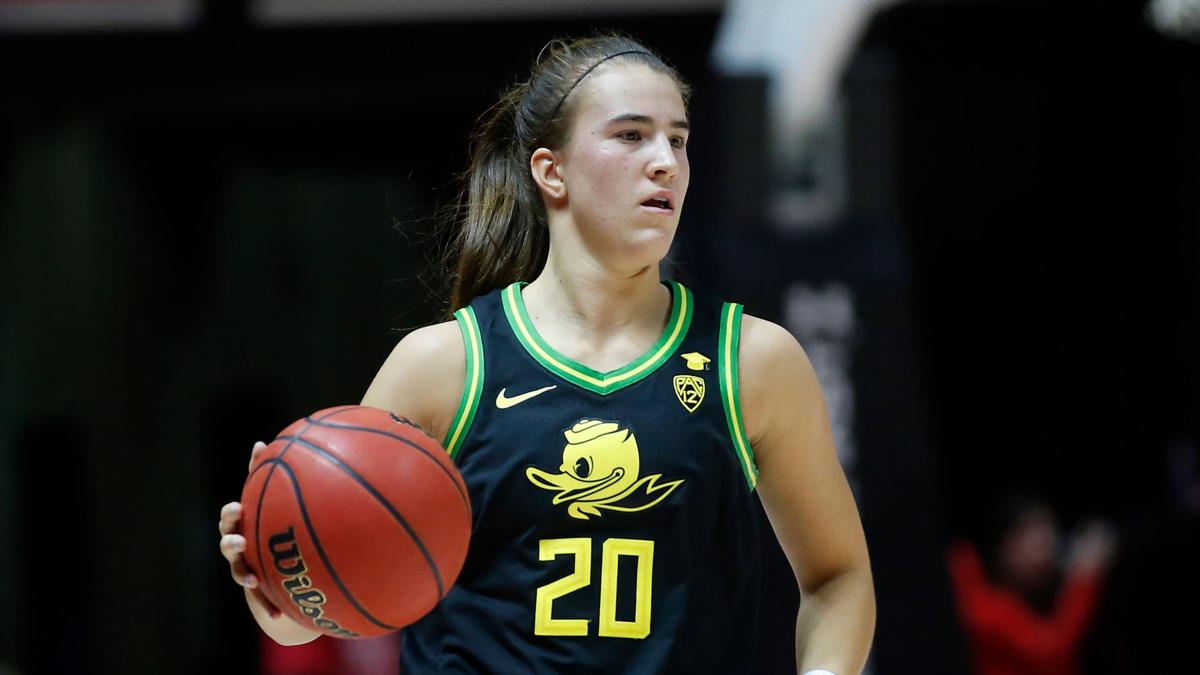 Oregon’s Sabrina Ionescu during a game against Utah in Salt Lake City in January. As she leads Oregon in its hunt for an elusive national title, Ionescu is having a far greater effect on the sport than even her records and awards would suggest.

Oregon's Sabrina Ionescu, center, pauses while warming up prior to last Sunday's game against Oregon State in Corvallis.

Oregon’s Sabrina Ionescu during a game against Utah in Salt Lake City in January. As she leads Oregon in its hunt for an elusive national title, Ionescu is having a far greater effect on the sport than even her records and awards would suggest.

Oregon's Sabrina Ionescu, center, pauses while warming up prior to last Sunday's game against Oregon State in Corvallis.

Nearly a third of Arizona State’s crowd is dressed in Oregon’s green and yellow. Everyone is here to catch a glimpse of the Ducks’ dynamic point guard. After Sabrina Ionescu takes her last shot of warm-ups, a young fan with no discernible Oregon clothing tracks Ionescu’s path to the locker room.

“Hurry up,” the girl whispers to her mom as they nervously speed-walk to catch Ionescu before she runs into the tunnel.

They approach her for a photo. Ionescu wraps an arm around the girl’s shoulder while the mother snaps the shot.

This is the face of college basketball, the record-setting guard whose smile for fans is as easy as her on-court grimace is fierce. Ionescu already has shattered the NCAA triple-double record for men and women — 24 and counting — but is battling for more than gaudy numbers.

As she chases No. 3 Oregon’s first national women’s basketball championship, Ionescu is making an impact on the sport beyond the records and awards she collects. The thousands of fans who pack arenas to see her Ducks play are evidence of that.

“It’s awesome to see how … people are talking about women’s basketball and slowly giving it the respect it deserves,” Ionescu said. “It’s awesome to be on that platform and advocate for what I believe in and what is deserved.”

Ionescu went from being the skinny girl who couldn’t get picked for playground games to taking over the record books.

She celebrates on the court, lifting her arms, pouting her lower lip confidently after shots. She challenges her teammates, getting in their faces about missed assignments whether in an offseason practice or during high-stakes games. She is a “generational player,” said UCLA coach Cori Close, whose No. 7 Bruins (21-2 overall, 10-2 Pac-12) host Oregon (22-2, 11-1) in a key conference showdown Friday night.

“She’s got an edge,” added Close, who coached Ionescu at the 2017 under-23 USA Basketball national team training camp. “One of the weaknesses, I think, of a lot of women’s teams is they don’t have somebody strong enough to be like, ‘Do your job.’ She would much rather be respected than liked, and I think that’s what makes her very unique.”

Ionescu’s competitive edge earned Kobe Bryant’s admiration as he regularly trained with the Oregon guard. She called the Los Angeles Lakers legend a “close friend” in a teary-eyed interview on the day of the helicopter crash that killed Bryant along with his daughter Gianna and her teammates Alyssa Altobelli and Payton Chester, with whom Ionescu practiced over the summer. She said she would dedicate the rest of her season to Bryant.

“You took me under your wing and believed in me more than I believed in myself,” Ionescu wrote on Instagram. “I only have one choice. To live out your legacy. You will forever live through me.”

Bryant’s influence helped Ionescu become a respected name among NBA stars. LeBron James called her “Queen Sabrina” in January after Ionescu scored 17 points with 10 rebounds and 10 assists in a win at Arizona. Golden State Warriors star Stephen Curry, whom Ionescu admired and studied for his shooting ability, called her “a legend in her own right” last April. Nike made replica Oregon No. 20 jerseys last November. The original white jersey sold out at the Oregon team store within hours of its release.

While many stars in the men’s game leave college for the NBA after their first year, women’s college basketball lives off the sustained star power of talented players who typically stay for four years.

Ionescu was the national player of the year as a junior and probably would have been the No. 1 pick in the WNBA draft last year. But she decided to return to Oregon, writing in a Players’ Tribune essay that the team had “unfinished business.”

They were building something, she continued.

Ionescu and her senior class that includes potential All-America forward Ruthy Hebard are the chief builders of the program. Oregon has boasted the biggest increase in attendance in NCAA Division I for the last two seasons. After drawing 1,629 per game the year before Ionescu arrived, attendance skyrocketed to 7,148 last year, when the Ducks advanced to their first Final Four. This year the Ducks draw 10,619 fans per home game.

She is the Pac-12’s all-time assists leader, passing Oregon State icon Gary Payton this season. While her gender-defying records boosted her resume, her legend grew larger as she rubbed shoulders with the NBA’s elite.

Through training with Bryant over the summer, Ionescu started to learn his signature fadeaway shot. She was in awe of the way he processed the game, understanding different angles on the court and describing things she never thought twice about in accurate detail.

It was a master class for someone with graduate-level qualifications. Ionescu’s understanding of the game is “unlike really many players that I’ve had,” said Oregon coach Kelly Graves, who compared Ionescu to Courtney Vandersloot, the former Gonzaga guard who became the first college player to score 2,000 points and rack up 1,000 assists.

Ionescu’s basketball classrooms were the playgrounds around her native Walnut Creek in Northern California. She played pickup games from dawn to dusk with her twin brother, Eddy, and his friends. The boys never made it easy on her.

“That’s how you learn how to play,” Graves said. “There’s not enough of that. Now everything’s organized for the kids. … I think the way you learn is by trial and error.”

Ionescu values the hard lessons she learned on the playground and playing as a physically overmatched sixth-grader on an eighth-grade team, when she overcame her defensive shortcomings as the smallest player on the court with her uncanny court vision. She saw passing lanes no one else did, but she was not strong enough to zip the ball through the lane. Her passes often got tipped or deflected. She knew her time would come.

“It toughened me up and made me better,” Ionescu said.

Even now, Ionescu is not the most physically imposing player. With her long, brown hair pulled into a pony tail, the 5-foot-11 guard disappears behind frontcourt stars like Hebard and Satou Sabally.

At her core, Graves said, Ionescu is a passer. But the guard also knows when to pounce, like when she scored 11 of her 17 points against Arizona in the fourth quarter to fend off a comeback in January.

In tight, late-game situations, Hebard looks at her point guard and feels calm. If Ionescu is here, Hebard says, they can do anything together.

“She’s just really smart and knows what she can do and knows what others can do,” said Hebard, who averages 16.5 points and a team-high 9.3 rebounds. “That’s what makes her such a great player.”

Hebard, a fellow senior and All-America candidate, and Ionescu make the most prolific pick-and-roll combination in college basketball history, Graves said. It is a key part of what makes Oregon’s offense one of the most efficient in the country.

The two just have good chemistry, Graves said. It is almost inevitable when the players are as skilled, athletic and hard-working as Hebard and Ionescu, the coach added. Ionescu says there is “an art” to figuring out the complicated on-court dance.

In the lobby of a hotel in downtown Tempe, Arizona, Ionescu paints with a finger on a smartphone. Bright red marks show up as she drags her finger on the screen, breaking down two plays from a win over Kansas State. She circles a defender in the key. That is their target. A bright red line shows Ionescu’s slithering path and a straight line shows Hebard rolling into the lane. Ionescu bounces a pinpoint pass to Hebard for an easy layup.

Oregon’s pick-and-roll combination was so efficient that it caught Bryant’s eye in an episode of his ESPN+ show “Detail” last year.

In the segment, Bryant highlighted the way Ionescu masterfully probes the defense enough to position Hebard’s screen in the ideal spot so the guard can then attack the post defender.

On another play, Bryant praised the way Ionescu expertly reads the weakside defense, noticing that two defenders were late to rotate toward Hebard cutting into the lane. The Oregon guard dumps the ball off for an easy layup.

“It’s like the puppet master,” Bryant said in the video. “Actually, that’s a good nickname for Sabrina. Geppetto.”

A year later, Bryant offered another nickname. After Ionescu scored a career-high 37 points against Stanford on Jan. 16, Bryant tweeted a single goat emoji at the Oregon star. Greatest of all time.