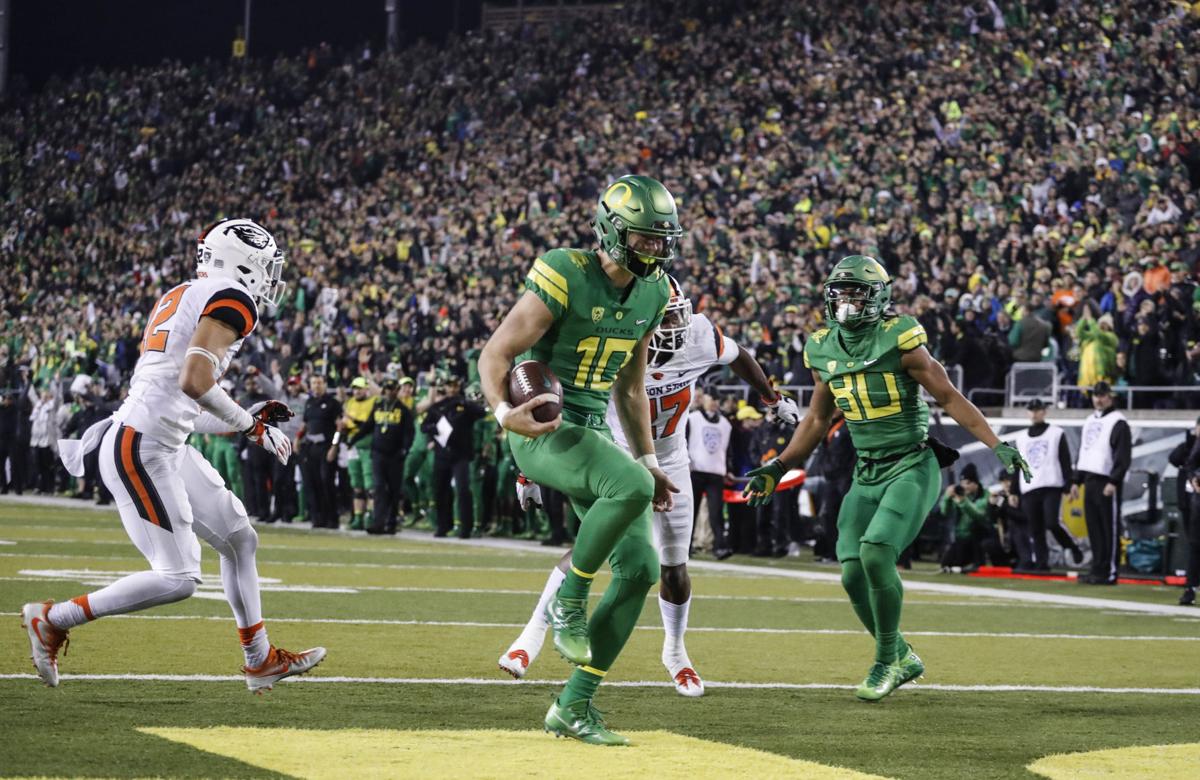 Oregon quarterback Justin Herbert (10) scores a touchdown against Oregon State in a game in Eugene in 2017. The Ducks and Beavers football programs are in a holding pattern due to the COVID-19 pandemic. 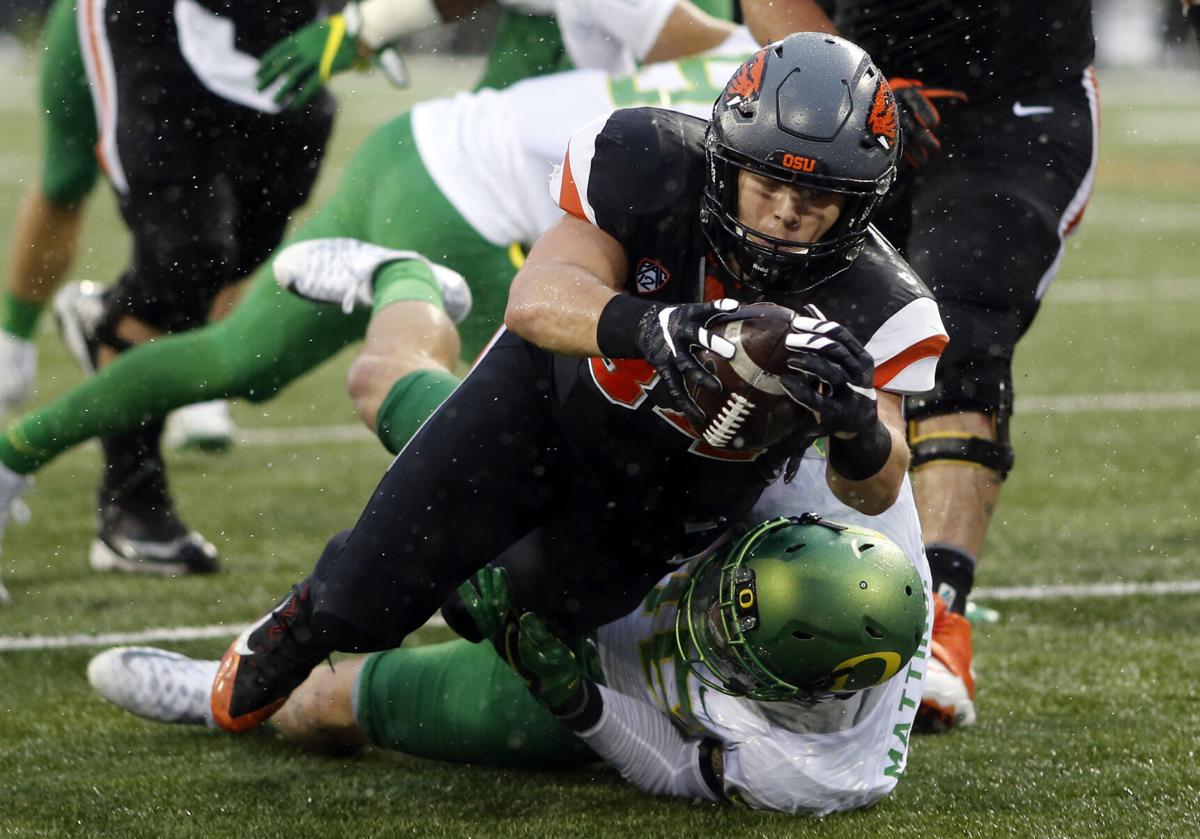 Oregon State running back Ryan Nall, top, dives over Oregon’s Danny Mattingly for a touchdown during a game in Corvallis in 2016. Both teams are in a holding pattern, waiting for Oregon Gov. Brown to allow the teams to begin practicing again. 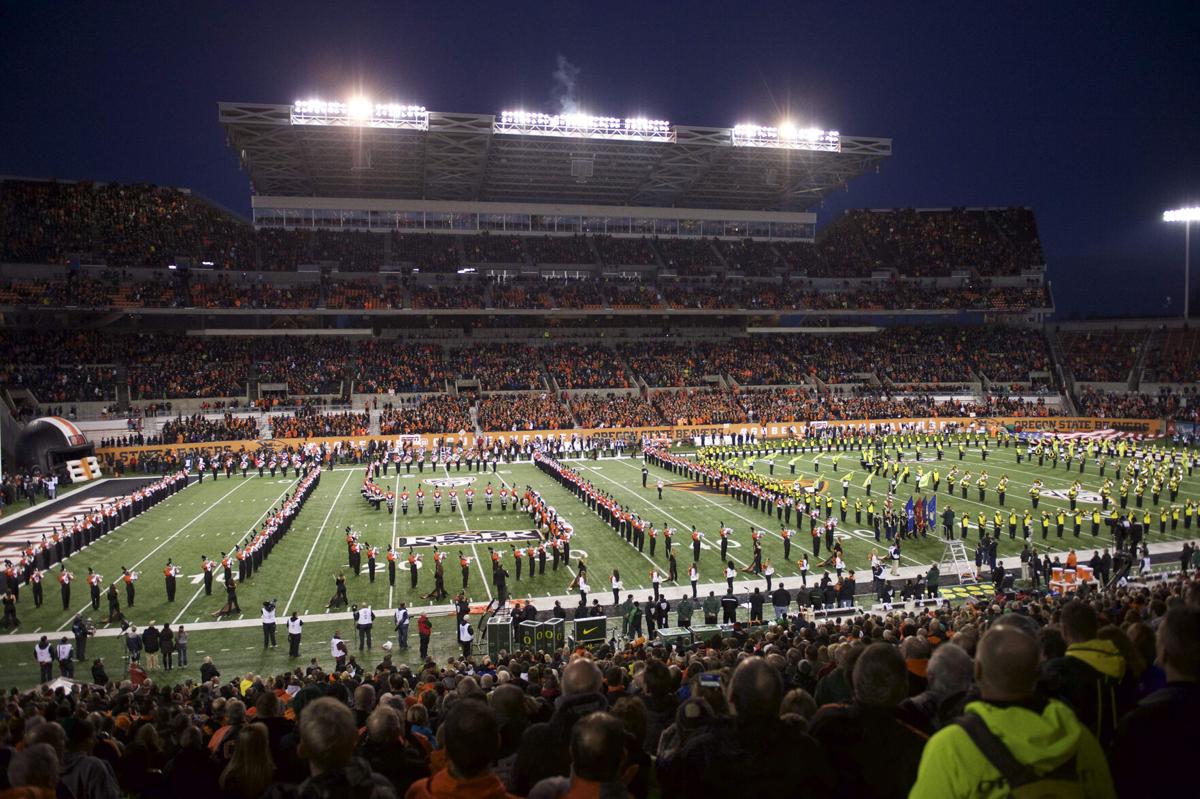 Oregon State and Oregon marching bands perform before the start of a game in Corvallis in 2014.

Oregon quarterback Justin Herbert (10) scores a touchdown against Oregon State in a game in Eugene in 2017. The Ducks and Beavers football programs are in a holding pattern due to the COVID-19 pandemic.

Oregon State running back Ryan Nall, top, dives over Oregon’s Danny Mattingly for a touchdown during a game in Corvallis in 2016. Both teams are in a holding pattern, waiting for Oregon Gov. Brown to allow the teams to begin practicing again.

Oregon State and Oregon marching bands perform before the start of a game in Corvallis in 2014.

I read the good news at the University of Arizona today with great interest. Turns out, the rapid-results testing being conducted there is a smashing success.

Meanwhile, in Oregon, we’re all left wondering what it might mean.

Governor Kate Brown has left things foggy on that front. She’s the ultimate gatekeeper, along with the Oregon Health Authority, on when the state’s major universities will be allowed to hold regular full sports practices. The college athletes are currently only able to participate in individual workouts. Amid that, some of the coaches in football and basketball decided to send players home.

The Ducks and Beavers football programs are in a holding pattern. So are the state’s college basketball teams. The Pac-12 hasn’t indicated a timeline to return to play, although anyone with access to a calendar thinks that November isn’t off the table. But nobody really knows what Gov. Brown is looking for or wants to hear before she’ll lift our state restrictions.

The rapid-results test equipment is scheduled to be in place at Pac-12 universities by the end of the month. And so I reached out this week to the governor’s office to find out if there’s a plan in place.

A spokesperson from her office told me on Monday that Gov. Brown is primarily focused right now on the ongoing wildfire response in our state.

That’s understandable — and far more important than college sports. Also, he said, “when it comes to college football, we all want to see the Ducks and Beavers take the field again.”

The Oregon Health Authority is in the process of working with the state universities to review potential plans for team practices, that spokesperson, Charles Boyle, added.

Boyle also said, “As other conferences return to play in other parts of the country, we are watching closely to see if those conferences can deliver on their promises to keep athletes and communities safe from the spread of COVID-19.”

That last part caught my attention.

They’re apparently following SEC football in our state capitol. The Big 12, too. Maybe some BYU and Notre Dame as well. It’s interesting that our state officials are waiting to see if there’s a negative impact from the return to play in other places in the country. But it’s not as telling to me as what’s happening on campus in Tucson.

Sixteen percent of those living in the campus high-rise towers tested positive. Among the fraternities and sororities, that positivity figure swelled to 21%. The issue here isn’t whether UA can easily and quickly identify those who have COVID-19, but whether the students even care whether they get it.

Robbins said there is a “clear subset of individuals — primarily students — who are not following the rules.”

Weeks ago when the Pac-12 Conference postponed fall football it got a lot of credit for treating football players as if they were like other students on campus. It’s a virtuous concept. I liked it. Maybe you did, too. But what’s unfolding before us is going to be a fascinating study. Because in order to get back on the football field the conference is going to have to make a strong case that athletes aren’t at all like the typical student.

Athletes definitely care whether they get COVID-19, they’ll insist.

One of the great frustrations that has come for those involved in sports in our state has been the lack of clear guidance from Salem. That’s not accidental. Here’s a secret: Early in the pandemic, the sports enterprises in this state formed a coalition and worked together.

The Trail Blazers, Timbers/Thorns, Oregon, Oregon State, Portland State and the University of Portland joined forces, among others. The aim was to create a unified pathway to eventually returning to play. Nobody knew how long it might take. Nobody could have imagined at what cost. But in March our sports enterprises saw others states across the country setting some strict guidelines and they banded together.

Per a source with direct knowledge, that sports coalition successfully convinced the governor’s office to exclude specific sports-related guidance from those initial COVID-19 news conferences.

Sports was totally left out and only peripherally discussed by the rest of us.

Remember the subsequent confusion for youth sports teams and parents? Remember the murky sports-related national headlines when our governor announced there would be no large-scale gatherings allowed in Oregon? Then, remember when Gov. Brown followed up by saying she would not put the Beavers and Ducks at a competitive disadvantage?

Gov. Kate Brown gave a lot of us a migraine by saying very little about sports early on. It was the equivalent of a political “limp leg” or “dead leg” maneuver in the open field. We reached for something that really wasn’t there. But it explains a lot in hindsight.

I’m certain state health officials are studying the potential long-term health affects of COVID-19, looking at data from rapid-results testing and buying themselves maximum time to make a decision. Those are wise things to do, especially when the Pac-12 doesn’t have anyone pounding a shoe on the table to get back to play.

The State of Oregon is also apparently rubbernecking a bit at the other football conferences. I put Gov. Kate Brown at No. 1 on my list of the 25 Most Influential People in Oregon Sports last month. I stand by it. She has a grip on the Pac-12 Conference. So does California Gov. Gavin Newsom. Six conference universities are under their collective command.

Meanwhile, the state’s high-profile coaches are busy saying the right things. What’s the point of doing otherwise in a public forum? And sports fans are frustrated, some because they badly want state sports to return, and others because they feel like they’re being fed hollow talking points.

I would just like to know if there’s a plan in place.

If so, what’s the current timeline?

A Pac-12 source told me he’s confident that the governors in California and Oregon will eventually lift restrictions and allow the football and basketball teams to return to practice. But I won’t be sold until I hear it from the governor’s mouth.