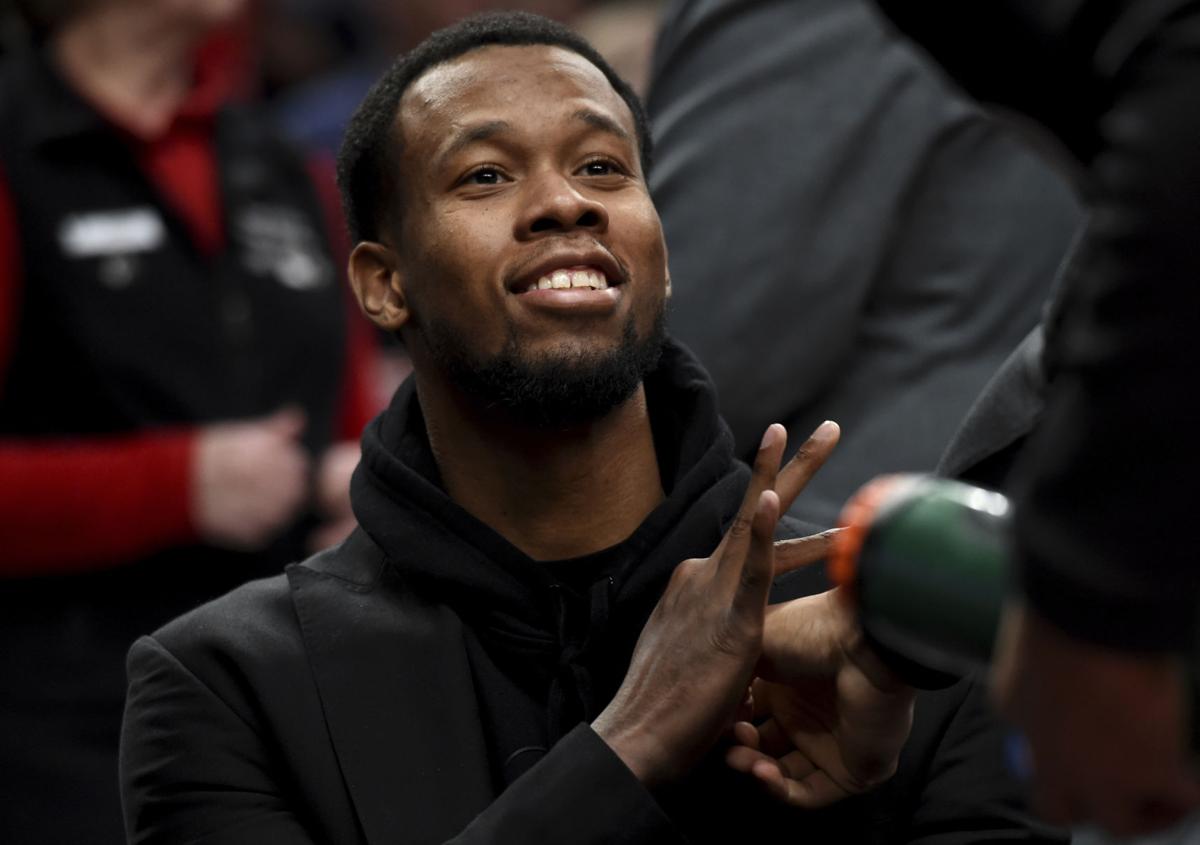 Injured Portland Trail Blazer Rodney Hood is greeted by teammates during the team’s game against the Utah Jazz in Portland on Feb. 1. Hood was injured earlier in the season and this was the first time he was back out on the bench with the team since that injury. 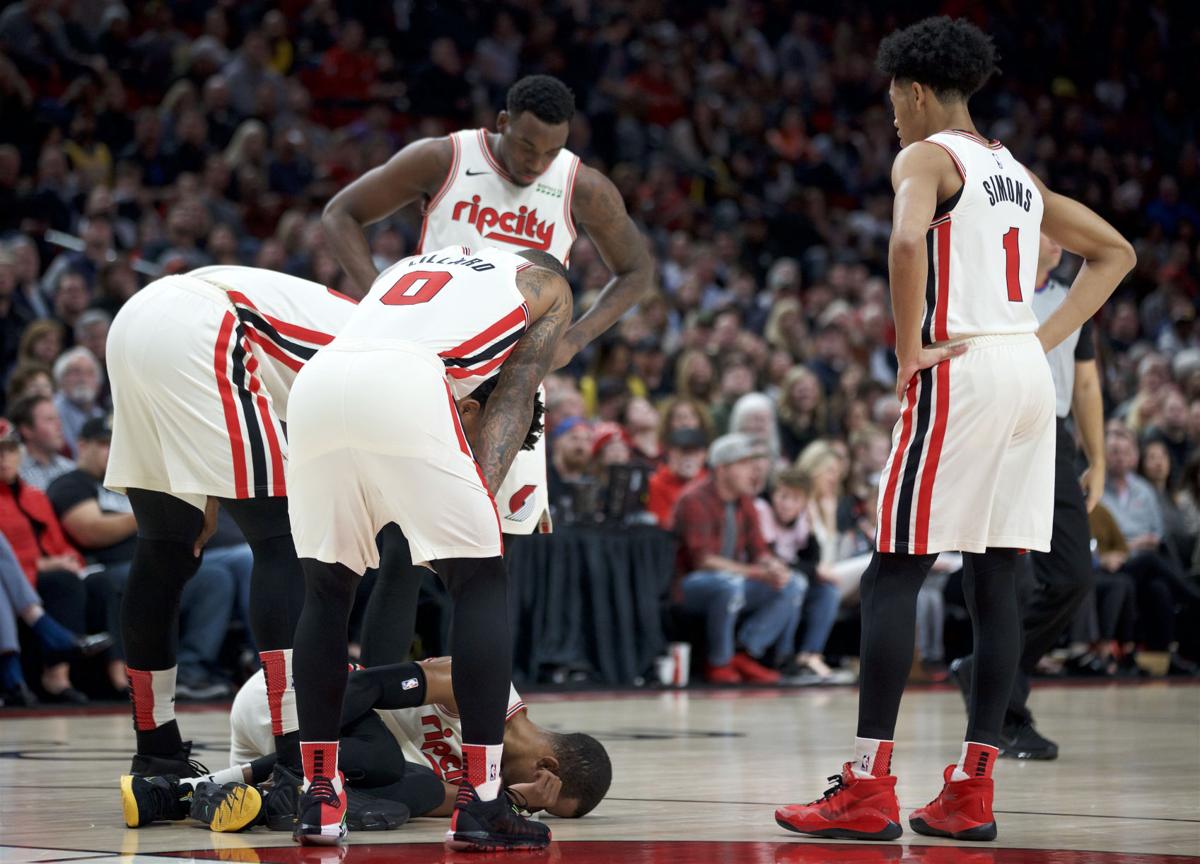 Portland Trail Blazers' Rodney Hood is surrounded by teammates after tearing his Achilles tendon during the team's game against the Los Angeles Lakers in Portland in December.

Injured Portland Trail Blazer Rodney Hood is greeted by teammates during the team’s game against the Utah Jazz in Portland on Feb. 1. Hood was injured earlier in the season and this was the first time he was back out on the bench with the team since that injury.

Portland Trail Blazers' Rodney Hood is surrounded by teammates after tearing his Achilles tendon during the team's game against the Los Angeles Lakers in Portland in December.

Rodney Hood’s mind began to wander as he sat on the Portland Trail Blazers’ bench at the Moda Center on Feb. 1.

He had returned to the arena that night for the first time since rupturing his left Achilles tendon against the Los Angeles Lakers on Dec. 6. Surrounded by his teammates and many fans, Hood felt rejuvenated. He was thrilled to cheer on his team as they picked up a big win against the Utah Jazz.

But there was a moment during that night when he found himself thinking about the future, rather than the game in front of him. He pictured himself out on the court, catching a pass, going up for a 3-pointer and watching his shot sail through the net as the crowd went wild.

“What motivates me now is just that first 3-pointer, hitting it in Moda, that’s what I’m working towards right now,” Hood said.

“It might seem small, but that’s my goal right now.”

Hood, 27, has tried to look forward, not backward as he has thrown himself fully into his rehabilitation over the last two months.

He is currently ahead of schedule in his recovery and is confident that he will be back on the floor next season, even though he said it is too early for him to know an exact timeline for his return. It usually takes at least seven months for a player to recover from a ruptured Achilles, and the rehabilitation process can take much longer.

For now, Hood is spending six days a week at the team’s practice facility in Tualatin, building strength in his left leg by doing toe raises and squats, marching in place and working out in the pool. The medical staff has asked him to continue to wear a walking boot when he is doing daily activities, but he said the boot is mostly precautionary at this point and he hopes to be rid of it by the time the Blazers return from the All-Star break next week.

“I’m very motivated,” Hood said. “I’ve been working really hard. I’ll get a full summer to work out and train. Hopefully, I’m at a good stage at that point, where I’m able to be on the court and stuff like that. We’ll just play it by ear. Barring any setbacks, I think I’m moving along quite nicely right now.”

In the moments after he ruptured his Achilles tendon in December, Hood found it difficult to accept that his season was over.

He was the player who had spurned offers from other teams during free agency over the summer, passing on more money and more years to sign a two-year, $11.7 million deal with the Blazers, choosing to stay with the team that helped him regain his love of basketball rather than chase more money elsewhere.

Before he crumpled to the floor nine minutes into that December game against the Lakers, Hood was enjoying a tremendous season, averaging 11 points and 3.4 rebounds over 21 starts, while boasting career-best shooting percentages from the field (50.6) and 3-point range (49.3).

After being helped off the court following the injury, Hood walked the rest of the way to the locker room, intent on telling the medical staff that he could return to the game. He thought he had been stepped on by JaVale McGee, but he quickly learned from the medical staff that his season was done, and he would have to undergo surgery for the first time in his life.

Hood cried for five minutes on the exam table, before his wife, Richa, and his 4-year-old son Rodney Jr. walked into the room. When he saw them, he managed to pull himself together. He then vowed that he would be upbeat as he strived to get back to the court.

Over the last two months, Hood has also leaned on the support of other players throughout the league that have gone through similar injuries.

On the morning after his injury, Hood reached out to former Blazer Wesley Matthews, who had his Achilles repaired in 2015 by Dr. Richard Ferkel, the same doctor who repaired Hood’s Achilles. DeMarcus Cousins and Kevin Durant reached out to Hood as well. And in the days leading up to his surgery, Hood’s phone kept lighting up with messages of support from friends, family and fans.

“It was an outpouring of support from people that reached out to me once I hurt it, people that I’ve never had relationships with that told me, ‘Just be patient,’ and if I needed anything, they’d be there for me,’” Hood said. “That made me feel good.”

For the first month after his surgery, Hood could walk only on crutches and was mostly relegated to his bed. During that month, he tried to take time to appreciate the little things in life and take advantage of the extra time with his wife and three children.

Returning to top form after an Achilles injury is not easy, and some players are never the same on the court.

But Hood has never doubted that he will be back next season, and he believes the work he is putting in now will make him an even better and stronger player when he returns to the floor.

Hood still has tough days, but in those moments, he thinks about the image of himself sinking that 3-pointer at the Moda Center. Then, he keeps pushing forward.

“I’m building myself up and working hard on my body,” Hood said. “It’s going to take time. I’m very patient, but I know, I can get back to myself and way better and get back to the trajectory that I was on. I’m excited about that. When it happens, I can look back at this time and be proud.”