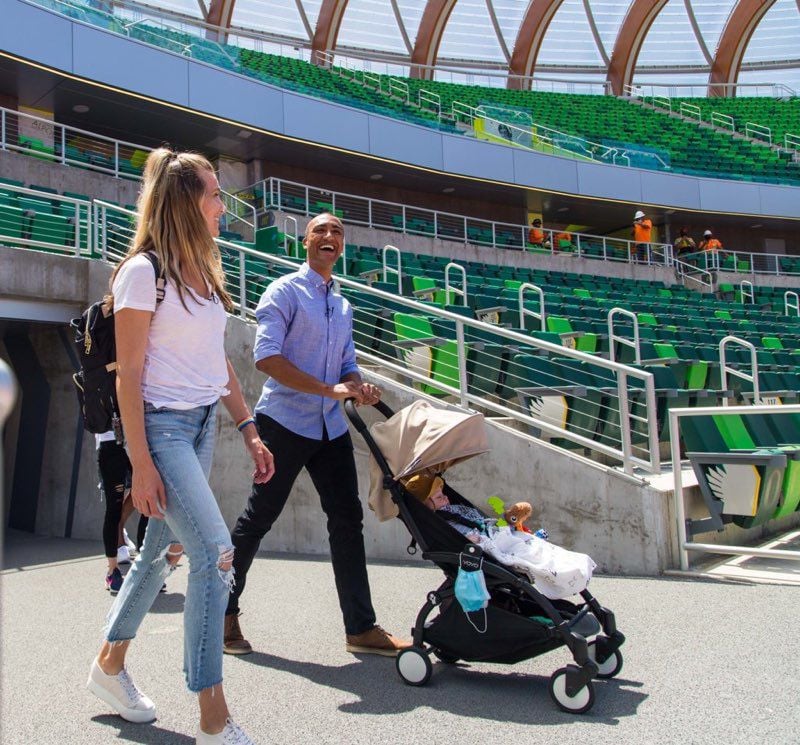 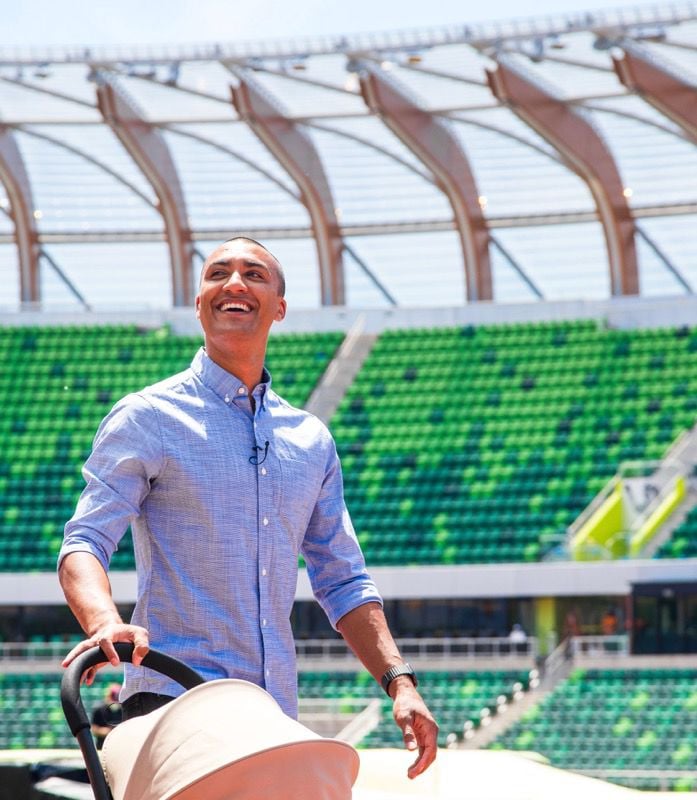 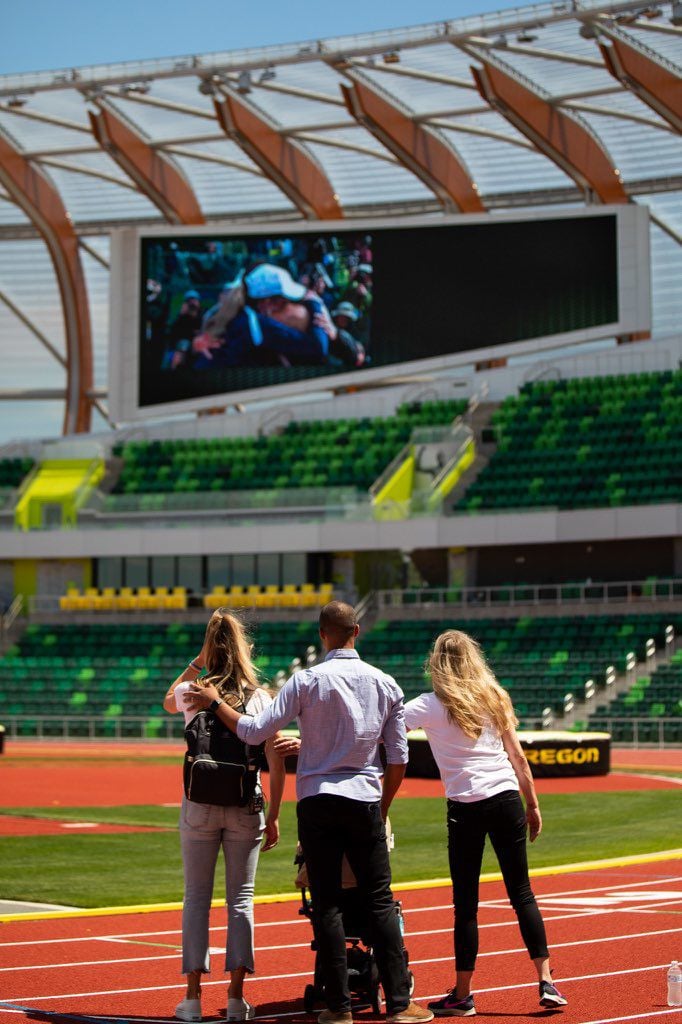 Ashton Eaton (center), his wife Brianne Theisen-Eaton (left) and mother Roz Eaton (right) reflect on Eaton’s 2012 decathlon world record as they watch a video of it at the new Hayward Field in Eugene. 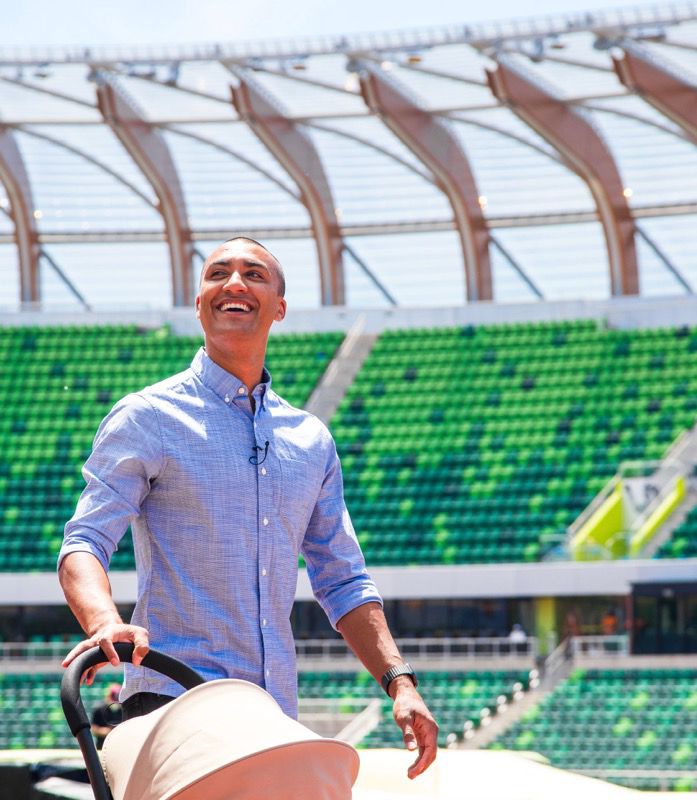 Ashton Eaton (center), his wife Brianne Theisen-Eaton (left) and mother Roz Eaton (right) reflect on Eaton’s 2012 decathlon world record as they watch a video of it at the new Hayward Field in Eugene.

Ashton Eaton no doubt cherishes the Olympic gold medals he won in London in 2012 and Rio de Janeiro in 2016.

But there is one moment that stands above the rest in Eaton’s storied decathlon career. Eight years ago, on June 23, 2012, Eaton set the world record in the decathlon with 9,039 points, winning the Olympic Trials in Eugene at the old Hayward Field and vaulting himself to track and field stardom.

Eaton, who grew up in La Pine and Bend and was a standout decathlete at the University of Oregon, would go on to break his own record, earning 9,045 points at the world championships in Beijing in 2015.

That world record has since been broken by France’s Kevin Mayer, who scored 9,126 points at a meet in France in 2018, but the memories of his world records are vivid for Eaton.

“I think it’s better than both of those, absolutely,” Eaton said, when asked to compare that performance in Eugene to his two Olympic golds. “Even in Beijing … I actually liked my world-record moments more than I liked my gold medal moments. Even though they are all important to me. The Eugene one is so special. I’m an Oregon kid, and I’ve been going to that track since I was in high school. To me it’s the story of, you just don’t know potential. You don’t know what can happen in 10 short years.

“Back in 2005, at the Oregon state (high school) meet, how would anybody know some kid from Bend would be the world-record holder in the decathlon? It’s just crazy.”

Eaton, 32, who retired from track and field three years ago, recently got to relive that moment at the 2012 trials in Eugene, when he was invited by Oregon head track and field coach Robert Johnson to come celebrate the eighth anniversary of his original world record. The visit on Tuesday allowed for Eaton and his family, who now live in San Francisco, to tour the newly renovated Hayward Field, which has been revamped over the past few years in order to host major meets, including the world championships in 2022.

They took a lap around the new track, pushing their infant son Ander in a stroller. Eaton’s mother, Roz Eaton, was there as well.

“It is just AMAZING,” Eaton said of the new Hayward.

During his lap, the video screen in the stadium played the tape of Eaton running that 1,500 meters, the final event of the 10-event decathlon, in the 2012 trials. Afterward, the screen showed videos of former teammates and their former coach Harry Marra, reflecting on that moment.

“We haven’t really been on a track, and once we walked out on the track, it smelled like that Tartan surface that we knew every day of our lives basically,” Eaton said in reference to the synthetic track surfacing. “And it just brought us back to something we had left behind. It made us feel special and reminded us of how special that time was, because we’ve kind of had our heads down in San Francisco doing other things and new things. It was mind-blowing from the standpoint of remembering that we somehow really had an impact on these people.”

Eaton was impressed with the new Hayward Field, which is designed to hold as many at 30,000 spectators when temporary seating is added for the world championships. The old Hayward had a capacity of 10,500.

“I was just imagining the crowd roaring and the sound just coming into my face,” Eaton said. “It reminded me a lot of stadiums in Europe, but a lot closer and more intimate. All the infrastructure underneath, for athletes and indoor training, it’s something I’ve never seen before. I’ve never seen anything that good, even in Olympic stadiums. All the stuff for the athletes is mind-blowing, from the lockers, to the treatment facility. And under the east grandstands is a museum.”

“It was almost like if you had the home you have now, you left for three weeks and somebody renovated it for you, and you came back,” Eaton said. “You know it’s still your house, but everything is kind of new and you kind of have to get used to it. This Hayward still has the potential to be classic, like the old one was.”

Eaton is currently working for Intel with the Olympic technology group, which creates technology that can track and analyze human motion with cameras and deliver results in 3D. The family is planning a move in the fall to the Portland area, where Eaton wants to pursue a degree in engineering, possibly attending the Oregon Institute of Technology campus in Wilsonville.

Even as his life has taken him away from the track, he often reflects on that day in Eugene eight years ago, when the Hayward fans roared and the young man from Central Oregon was well on his way to Olympic glory.

“At that time I fulfilled a dream,” he recalled. “I wanted to be an Olympian, and I did it. To do it in that fashion, that was just kind of the start of how everybody knows Ashton Eaton today.”