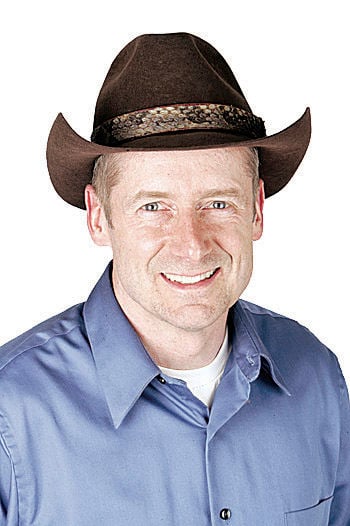 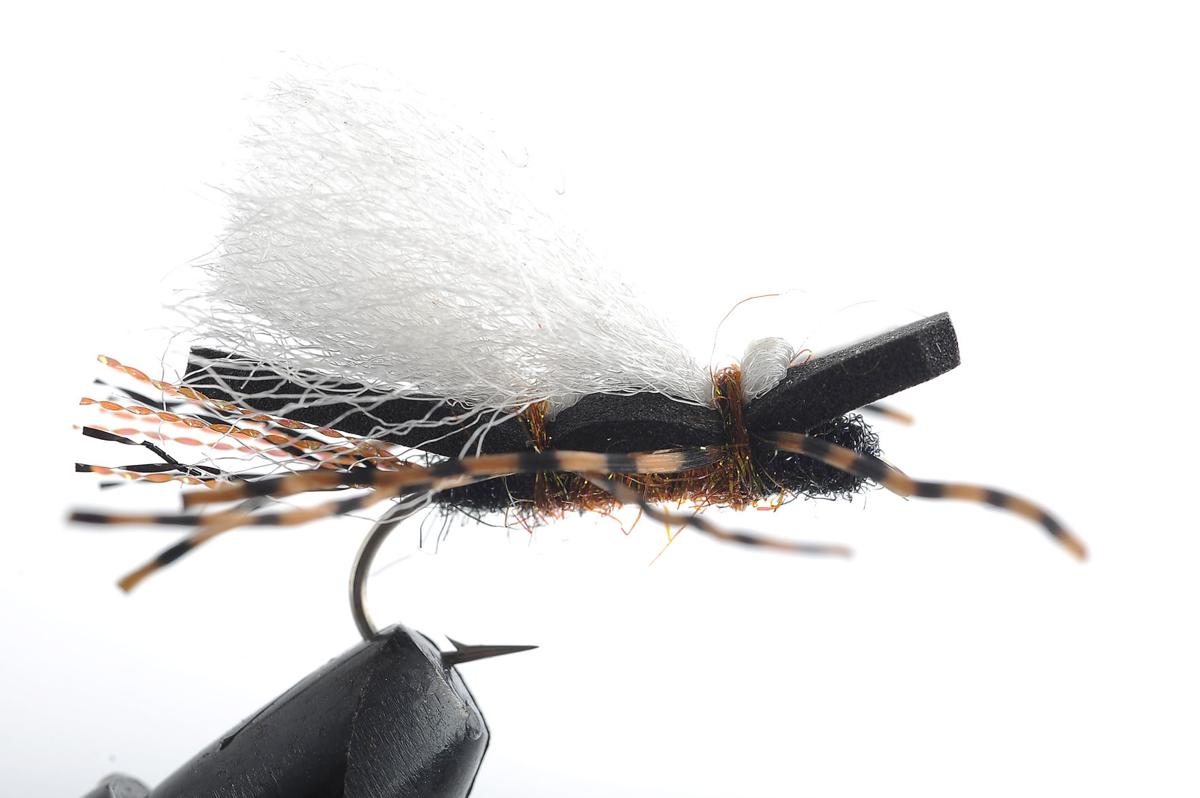 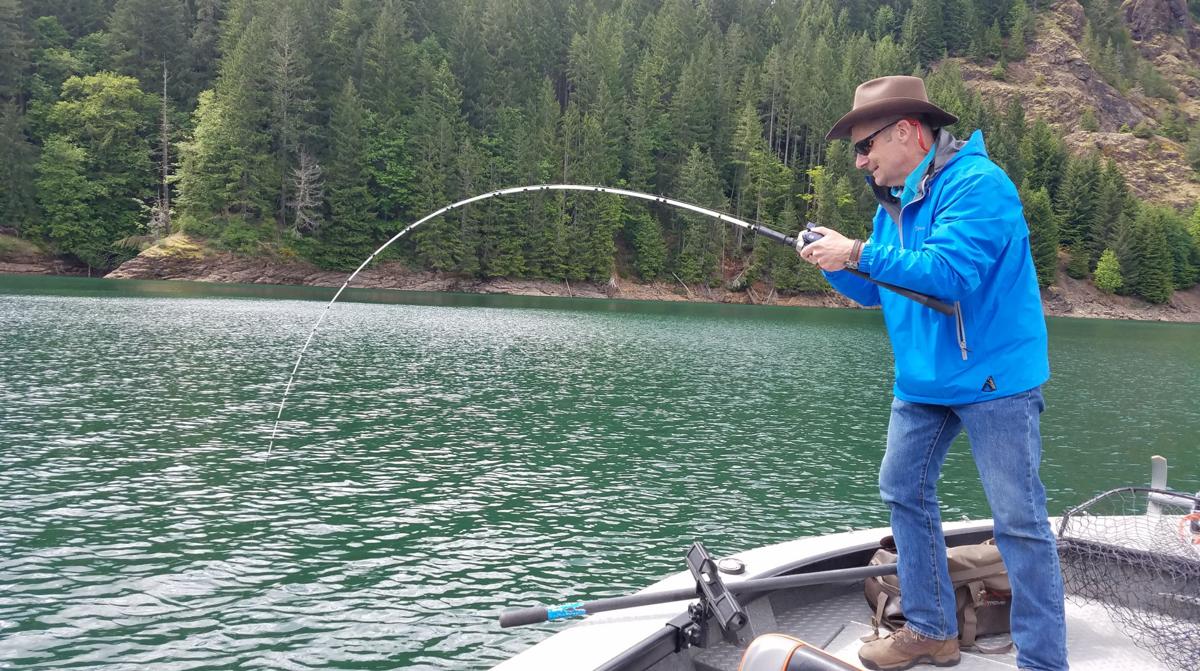 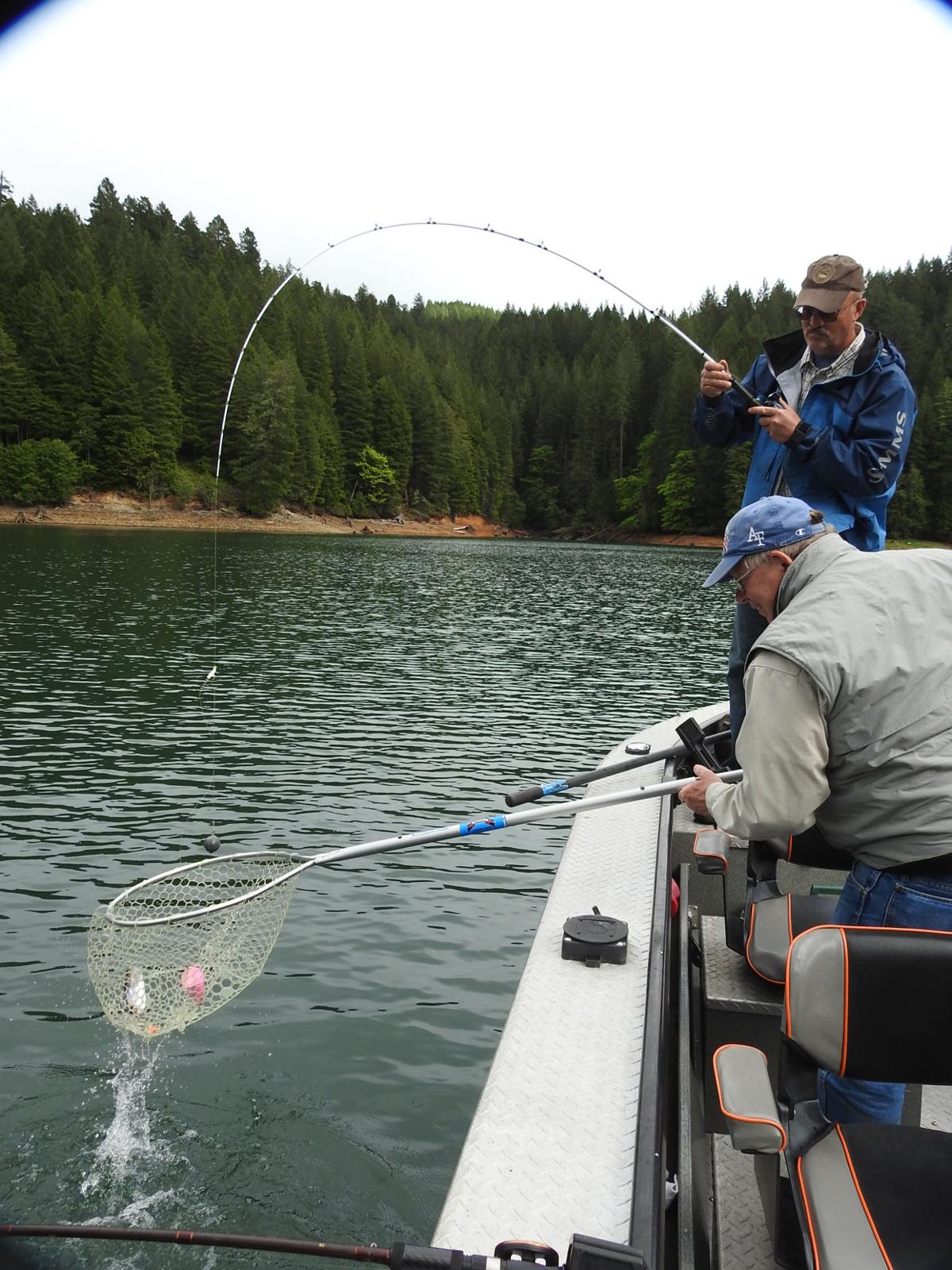 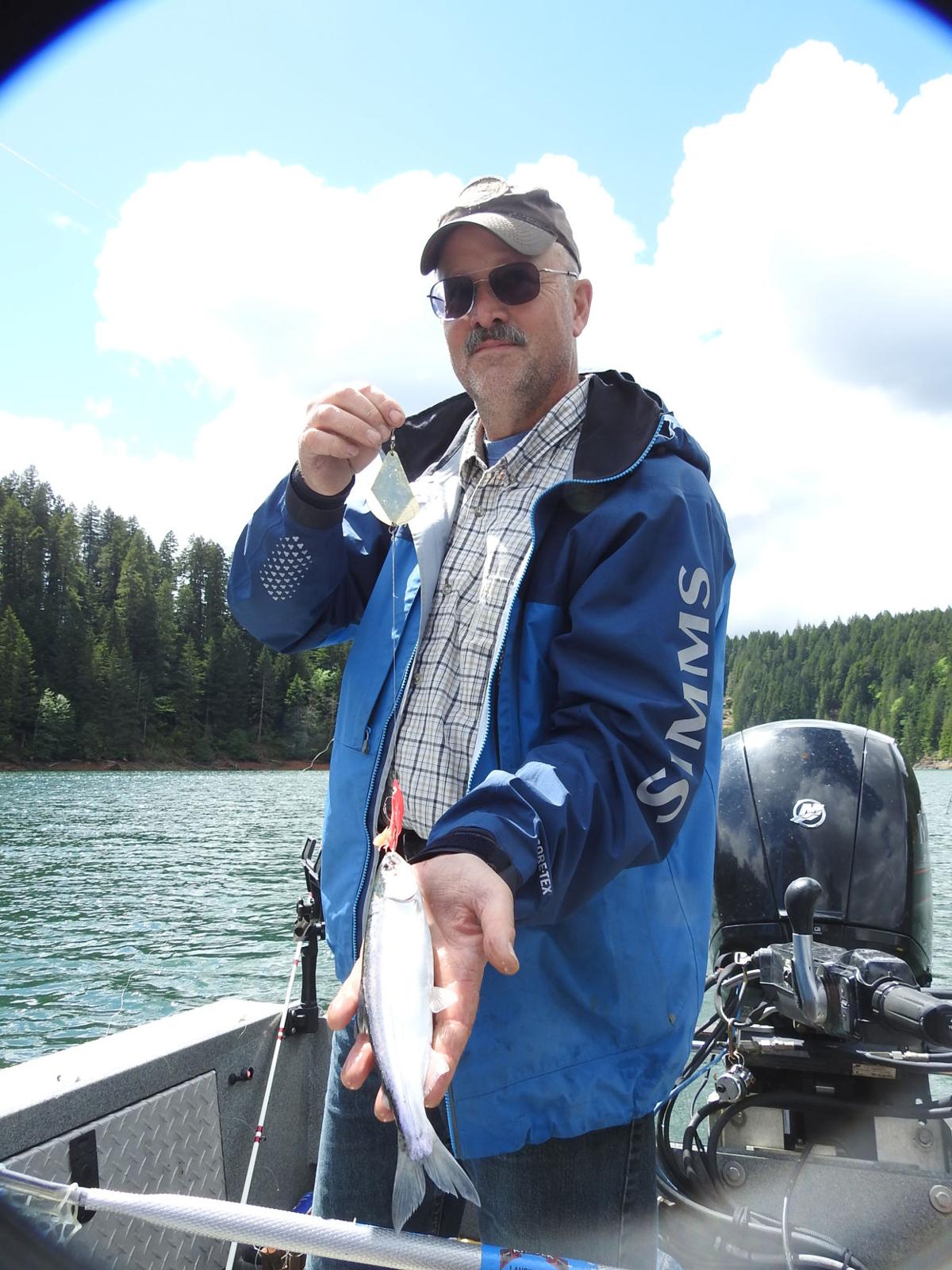 Damon Struble, owner of Nomad's Fishing Adventures, with a Green Peter kokanee. This reservoir near Sweet Home has abundant landlocked sockeye as well as a hatchery trout fishery. (Photo by Gary Lewis)

Damon Struble, owner of Nomad's Fishing Adventures, with a Green Peter kokanee. This reservoir near Sweet Home has abundant landlocked sockeye as well as a hatchery trout fishery. (Photo by Gary Lewis)

Too many kokanee. That was the problem. We had the cure.

As we idled away from the dock in the Nomad’s Fishing Adventures 24-foot Koffler sled, Bill Kremers and Josh Hopkins tied up rigs. Our guide, Damon Struble, passed out cups of cured corn. Garlic on the starboard side and krill-marinated kernels on the other. Then Struble pointed the bow up into the narrows.

A few minutes later, when Struble shut off the Mercury, he looked each of us in the eye — Tim Wehde, Kremers, Hopkins and me. “We’re going to set the back rods at 60 feet out and the front rods at 70 feet. Put one to two kernels of corn on each hook. Things are going to be chaotic. If a rod starts bouncing, don’t worry about whose rod it is. Pick it up. If you are tying up a new bait and see a rod with a fish, set the first rod down and get the fish in the boat.”

Each rod was loaded with a 3-ounce weight to run the baits 30 to 40 feet down where thousands of kokanee schooled below us.

At full pool, Green Peter Reservoir, located in Linn County about 11 miles northeast of Sweet Home, covers 3,700 acres and is 10 miles long with 38 miles of shoreline.

The water level fluctuates and the fish move around, but there are some well-known kokanee spots.

The locations include near the dam, in the Quartzville arm (where we fished), and around the peninsula in the main channel. Jigging is a favorite technique early in the year, but trollers seem to do better in the summer.

Damon uses a Simon 4.0 kokanee dodger on the main line with a Gold Star micro hoochie. Another good bet is a Kokanee Kid Super Mysis Bug or a Mack’s Lure Double Whammy with a 10-inch leader. Most anglers add white corn. Damon likes to marinate the corn overnight in Pro-Cure krill powder and Garlic Plus.

Hopkins had brought two prototype Lamiglas kokanee rods, graphite/fiberglass hybrids with slow actions. We would put them to the test with these heavy 3-ounce weights.

For several years, the Oregon Department of Fish and Wildlife found itself with a surplus of sockeye smolts, Struble explained. Those fish ended up in Green Peter Reservoir.

“The result is such an overabundance there isn’t enough food for all the fish. So they are stunted,” Struble said.

In less than two minutes, we had the first bite. The fish came fast, sometimes with two or three rods bouncing at once. As quick as we could put fish in the box and put fresh bait on hooks, there would be another bite. Our kokanee averaged 8 to 9 inches each.

The direct beneficiary of the kokanee experiment is a little-­known landlocked chinook salmon fishery created by ODFW almost 20 years ago.

“They wanted to see if the chinook salmon would migrate through the dam and return. For seven or eight years, ODFW put 20,000 chinook smolts in the reservoir,” Struble said. “After some high water flood years that blew out the catch nets, the project was abandoned.”

Technically, the experiment didn’t prove successful, but the chinook are still there. “They turned Green Peter into their ocean and spawn up in the creeks,” Struble said.

How big do they get?

“The biggest one I have caught was 161⁄2 pounds, while trolling for kokanee with a dodger and a little hoochie,” Struble said.

Those landlocked chinook are growing big on the kokanee. Struble estimates he has caught 25 or 30 chinook between 2 and 10 pounds while fishing for kokanee.

“When they are small, I’m not sure what they feed on, but inside that 161⁄2-pounder was a mostly digested kokanee about 8 inches long.”

We didn’t have time to target Green Peter rainbows, but that is another facet of this interesting fishery. Ahead of Memorial Day weekend, the state planted 10,000 rainbows. Anglers don’t get them all.

“Come springtime there is a really good population of hungry holdovers that range from 12 to 18 inches,” Struble said.

While we worked back and forth above a biomass of kokanee, the eagles and ospreys watched. When we lost a fish at the surface, a raptor would swoop down to pluck it out of the wind-riffled water.

At Green Peter, the kokanee limit is 25 per day in addition to the daily five-trout limit. There is no size restriction for kokanee. Landlocked chinook salmon may be retained as part of the kokanee limit.

Damon glanced at the western sky, which had suddenly filled with clouds, and said, “Unless you guys want part of that, we should run for the dock!” And run we did. By the time the Ford was pointed toward Central Oregon, the windshield wipers were working overtime. We had boated 45 kokanee in two hours. We hardly put a dent in them.