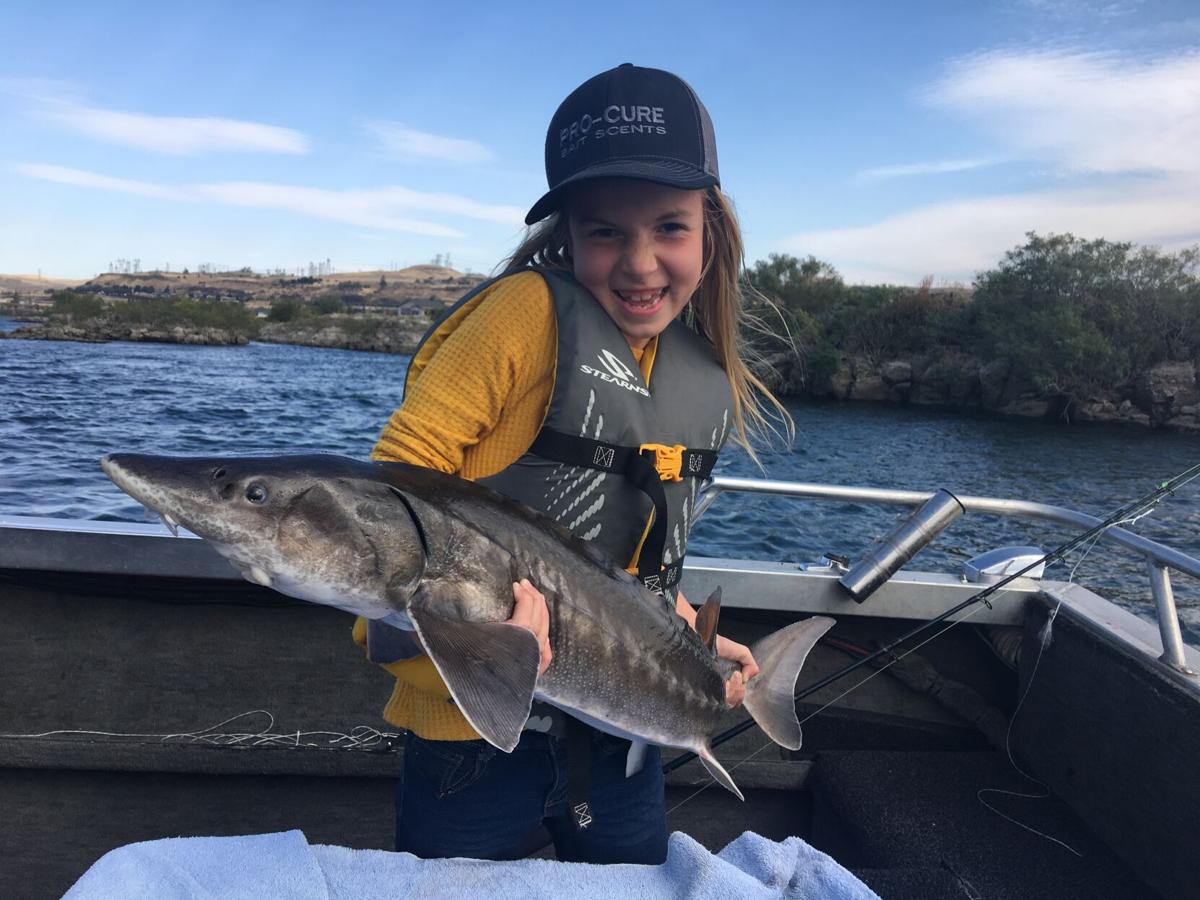 Seven-year-old Ava poses with a sturgeon on a home-school sturgeon trip to The Dalles. 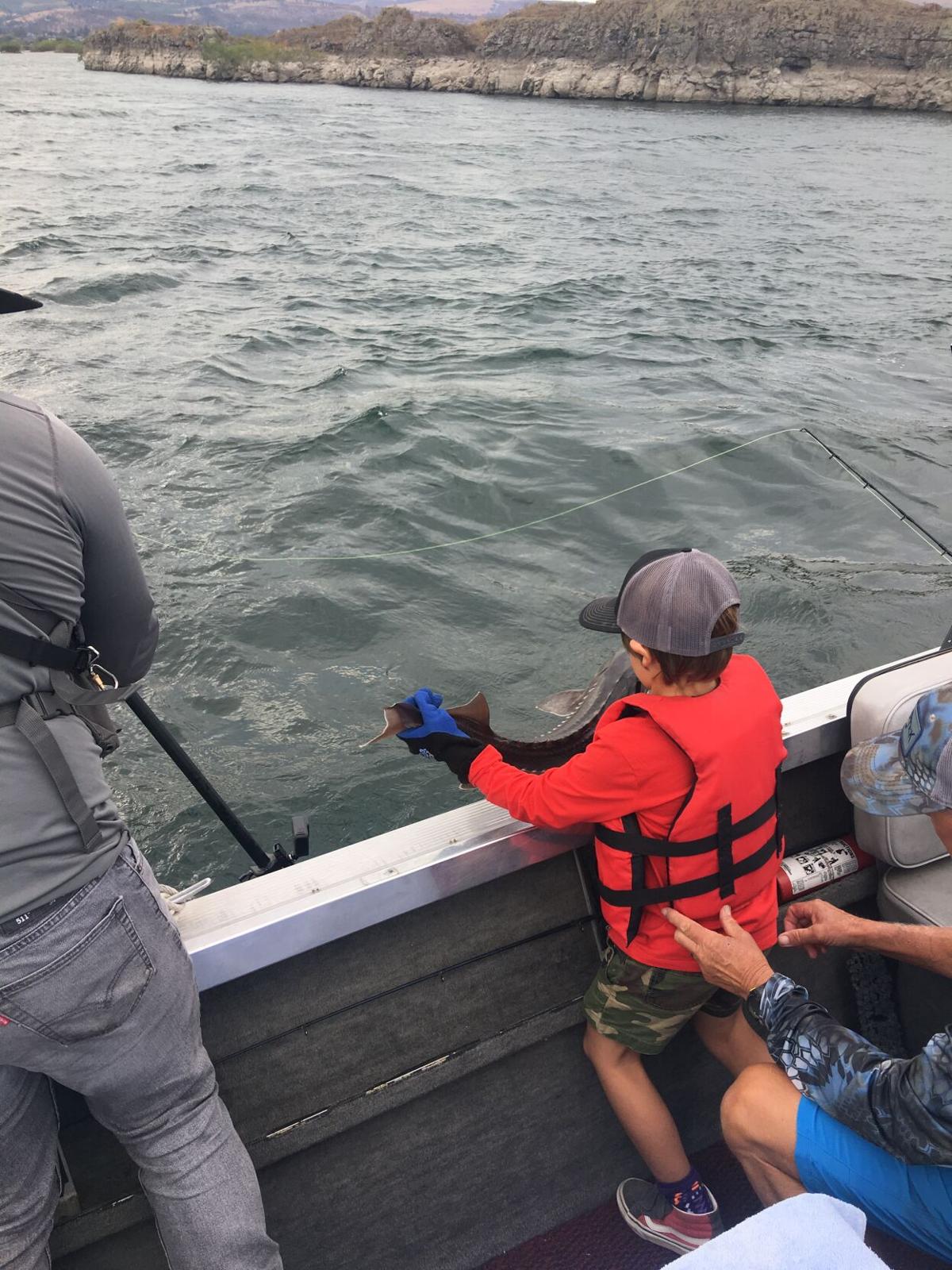 Five-year-old Holden releases a 3-foot sturgeon into the Columbia River. 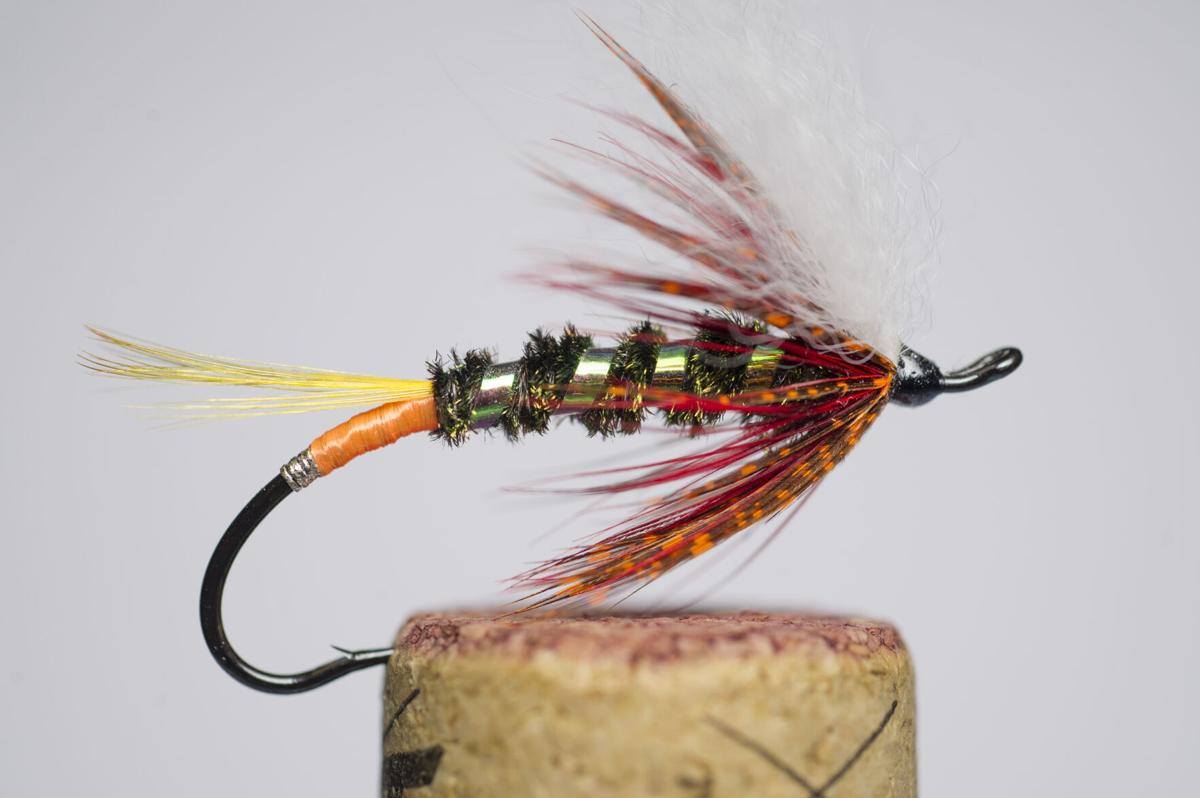 Seven-year-old Ava poses with a sturgeon on a home-school sturgeon trip to The Dalles.

Five-year-old Holden releases a 3-foot sturgeon into the Columbia River.

Where do you go to catch the biggest fish of your life? You go where grandpa tells you.

You go to the Columbia River.

Last year it would have been called playing hooky. This year we called it home-school.

My daughter Tiffany was happy when I suggested I substitute-teach 5-year-old Holden and 7-year-old Ava for a day.

The kids buckled into the F-150, and we headed north to The Dalles. We hit Spooky’s Pizza by 6 p.m. and turned in for the night at the Shilo Inn where the first lesson for the second grader was on John Slocum and the Indian Shaker Church.

In the morning we started at Momma Jane’s for pancakes, and from there we headed to the Columbia Gorge Discovery Center.

Like a couple of pilgrims, the kids wandered through displays on the Oregon Trail, Lewis and Clark, North American native architecture, dire wolves, giant beavers, short-nosed bears and dinosaurs. They climbed on the huge carved sturgeon.

“Sturgeon really do grow to 14 feet long, and every time we fish the Columbia, there is a chance we will hook one. Dinosaur fish,” I explained, they are survivors down through centuries of climate changes and floods, drought and industry.

These kids have caught a lot of fish, but sturgeon are a different kind of beast. Their grandma’s biggest was well over 9 feet long. My biggest measured 10 feet, 9 inches long and probably weighed 375 pounds.

My friend Greg Gustafson, owner of Sturgeon River Monsters, met us as the ramp. The kids buckled into life jackets, and the boat rumbled away from the launch.

We anchored in the calm waters off the main channel where sturgeon roam in and out among the rocky islands. But big fluctuations in the river level the day before had put the fish off the bite.

Anchored in 14 feet of water off the edge of a tongue of current, we saw fish on the depth finder. Gustafson pointed out a larger image, close to the bottom. “That’s a bigger one,” he said to Holden.

The tackle was downsized to fit the kids. Ava’s was a short sturgeon boat rod, while Holden’s stick was a 9-foot spinning setup, better suited to steelhead.

Pickled squid and nightcrawlers were the baits. I had anticipated a dozen sturgeon in two hours or so, based on past forays among the islands. It was not like that. The first bite came two hours in. We moved several times, looking for the deepest buckets that would hold the most fish. Looking for a fish that didn’t have lockjaw.

Greg didn’t want to admit defeat. We would stay till dark if we had to. It wasn’t part of the lesson plan, but the kids learned patience, too. Then the rod baited with the squid began to tap-tap-tap, and the clicker on the reel started to sing. Fish on!

Greg showed Ava how to put her feet against the boat, keep the rod up in the air, and how to use her body to work the fish. It was chaos; a pure slice of Columbia River sturgeon subculture. Nature as classroom.

Then there was a barbless hook to remove and a quick picture to take. Easily the biggest fish of her life, Ava watched the 42-inch white sturgeon kick away into the deep.

Another hour passed and the sun slipped toward the Cascades in a smoky sky. The nightcrawler baits had been pecked at, but the fish were less than enthusiastic and we had lost almost all our hooks to the rocks.

I rummaged through my pockets, found a bottle of Pro-Cure squid oil and gave a fresh crawler a liberal application.

Drop the bait all the way to the bottom, reel up one crank, let that squid-scented goodness hover among the dinosaurs.

A sturgeon climbed on.

We had no way of knowing if it was a 7-footer or a 3-footer, but I hoped for the latter. The steelhead rod was bent all the way into the water. I held on to the boy’s life vest while he battled, and took the rod from him a couple of times as the fish went under the motor. To follow the fish around and clear the prop each time, the rod had to be stabbed down deep. After three times around the boat, the fish began to tire, and Greg helped Ava make the scoop.

We estimated this one at 3 feet long, with razor sharp scutes along its back and flanks. Both of the kids went home with war wounds from the biggest fish of their lives.

We talked about dams and salmon and the fur trade, ghost towns and cherry farming. We talked about Celilo and the ancient culture whose symbols are carved in canyon walls. There is a lot to teach the kids on the banks of the big river.

A lot of us think it doesn't matter what fly you put in front of a steelhead, as long as it gets there. If you think the right fly matters, take a close look at this one. I like Rowell's Steel Hammer in red for late summer from dawn to dusk. It has a slim profile with a red guinea collar, robust white wing, insect green flash and an orange tag going away.

Anchor the feet, keep the rod secure, drop a shock loop then swing the fly in a slow, soft arc. In the cooler waters of October, a sink-tip might put the fly in the strike zone. If a fish pecks but misses, wait a moment then tie on a smaller version of the same fly and make the same cast. At the strike, let the fish's head and body turn before lifting the rod.

Tie this one on an up-eye steelhead hook. Tie in two raps of oval silver tinsel then complete the tag with orange floss. For the tail, use yellow hackle fibers. Build the body with peacock Ice Dub and rib with insect green mylar. For the collar, use red guinea and finish with a short white calf tail or poly wing.