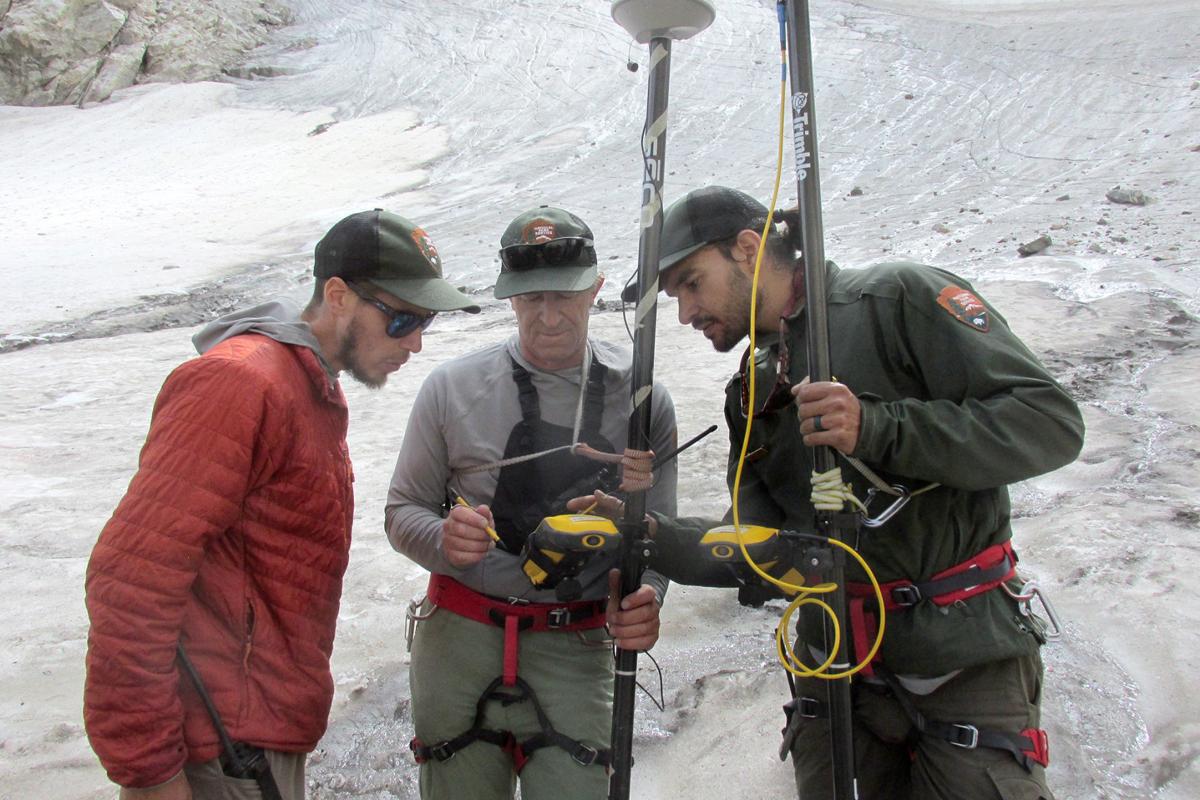 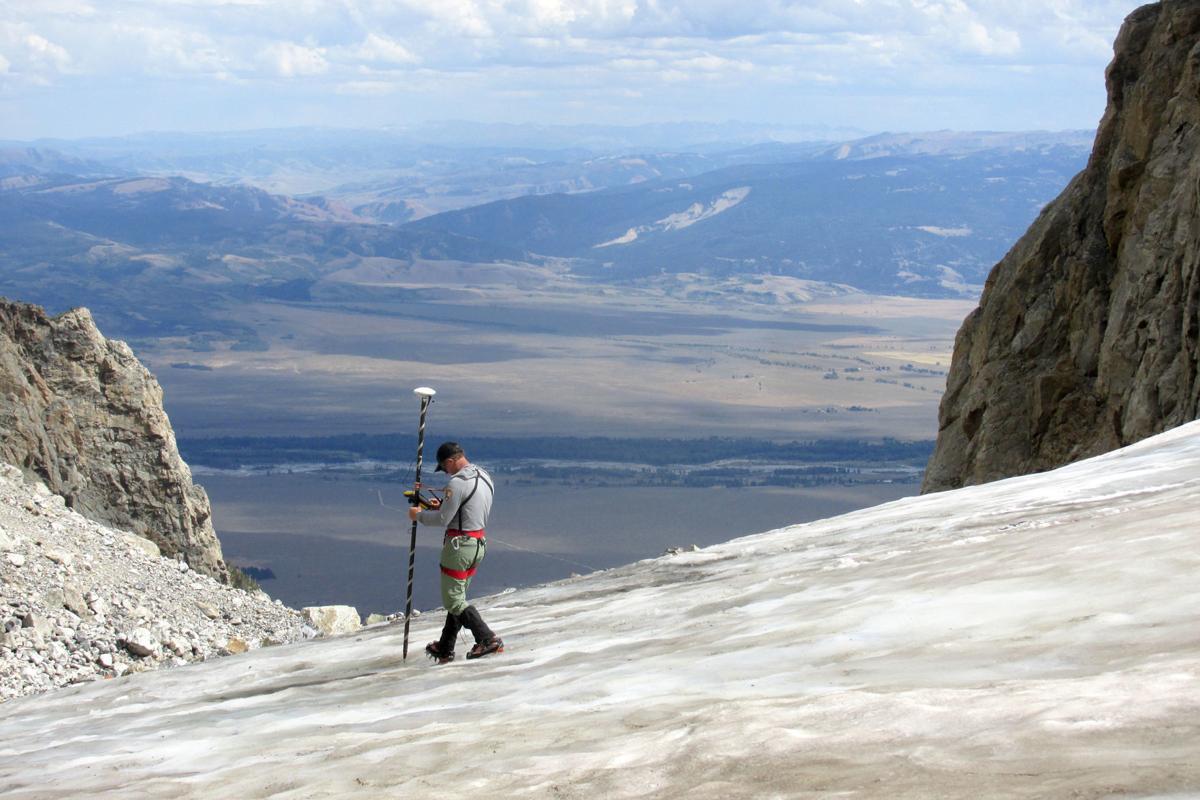 GRAND TETON NATIONAL PARK — There was an air of urgency Thursday as glaciologists moved about the Middle Teton Glacier with tall, scepter-like poles called Trimbles.

Like an ornate royal staff imbued with magical properties, Trimbles are made of high-tech graphite and equipped with GPS satellite tracking and computers to record and find precise positions. The scientists were constantly peering at the computer screens to find the exact spot on a grid. They would pause for less than a minute while the GPS gear took a reading, then carefully stepped on the icy surface to the next plot point.

“The forecast is for possible rain and bad weather tomorrow, so we want to get this going — at least get the points up high where it’s steep,” said Simeon Caskey, a national park glaciologist. Caskey was decked out in mountaineering garb, wearing boots, crampons and a climbing harness.

Like wildlife biologists capturing and collaring a grizzly bear to check its health and vital signs, glaciologists hiked deep into the Teton backcountry to prod, probe and measure the health of the Middle Teton Glacier.

The scientific study is part of a recent effort to better know the status and personalities of at least five of the Teton Range’s glaciers and how the glaciers’ status fits into global climate change.

The park is making a concerted effort to study five of its 11 glaciers — the Teton, Middle Teton, Schoolroom, Petersen and Falling Ice glaciers. Some of the park’s glaciers may no longer be moving and are now considered remnant glaciers or ice patches.

Moving glaciers often form crevasses. Crevasses form when the brittle upper layer of the glacier cracks as the more pliable ice beneath flows over obstacles or around corners. “Imagine bending a Snickers bar slowly. The brittle chocolate fractures while the caramel and nougat bends,” according to the park’s descriptive brochure titled “Disappearing Glaciers.”

“These glaciers were formed during the Little Ice Age about 1300 A.D. to 1850,” said McCracken, as she hiked up the trail. “The Tetons were mostly shaped during the (Pleistocene) Ice Age of 10,000 years ago.”

The current ecology of the Tetons is dependent on the normal ebb and flow of glaciers and permanent ice patches providing late-season water and year-round water for native fish and animals. When glaciers vanish, the ecology will change dramatically, McCracken said.

Caskey said it will take time, perhaps a decade, for glaciologists to gather enough data on Teton glaciers to correlate it with climate change models. Scientific Teton glacier studies didn’t begin in earnest until 2015.

To measure how a glacier is progressing, the crew takes measurements in the spring after most of the significant snowfall has ceased, and near the end of summer before the snow season begins again. The group was up there June 1 to begin the process.

The crew uses different tools: Time-lapse photos from cameras stashed nearby, ablation stakes placed in the snow/ice and GPS readings taken from the surface to track depth and the glacier’s perimeter.

Ablation stakes are placed in the snow and ice by drilling a hole using a steam drill. The 35-pound drill was hauled up on Caskey’s back during the crew’s June visit. A long, segmented and measured PVC pipe is placed in the hole. As the snow melts out, the pipe is exposed and becomes a simple way of measuring the rate and amount of snowmelt.

“We could have placed a deeper ablation stake,” McCracken said, “but the hose on our steam drill is only 13 meters long.”

McCracken said three ablation stakes were placed on the glacier, one near the bottom and two higher up.

The first thing to be checked when the crew arrived at the glacier on Thursday was an ablation stake. McCracken stood next to the lower stake and counted how much had melted out since June 1.

McCracken said because this is the first time these studies have been done on the Middle Teton Glacier, she didn’t know if this was unusual or normal.

“We’ve got a lot to learn,” McCracken said. “The dynamics of this glacier are hard to know.”

The glaciologists said each of the Teton glaciers have their own personality depending on the surrounding terrain and exposure to the sun. McCracken said that while glaciers are melting away, the rate of shrinkage has slowed as they have retreated into more shaded and sheltered environments.

Like many of the other Teton Range glaciers, the Middle Teton Glacier has steep angles and deep crevasses. That’s where 30-year Teton climbing ranger Fletcher lends a hand.

“Every time we’ve done this, I’ve been involved,” he said. “I just like to climb on ice.”

Fletcher said he never tires of the environment and is the first to sign up when the glacial duties are posted among the climbing rangers.

It usually takes a few days for the crew to complete their survey. Overnight accommodations are provided in the park service’s hut on the Lower Saddle between the Middle and Grand Teton peaks.

“It’s a pretty cushy setup,” Caskey said. “Not like the Exum Guide’s hut where they pack ’em in like sardines.”

Nadeau said talking with people about his work on Teton glaciers usually brings a positive reaction.

“People thank us or want to know how it’s going,” Nadeau said. “It’s cool to see people wanting to know what’s going on in their parks.”