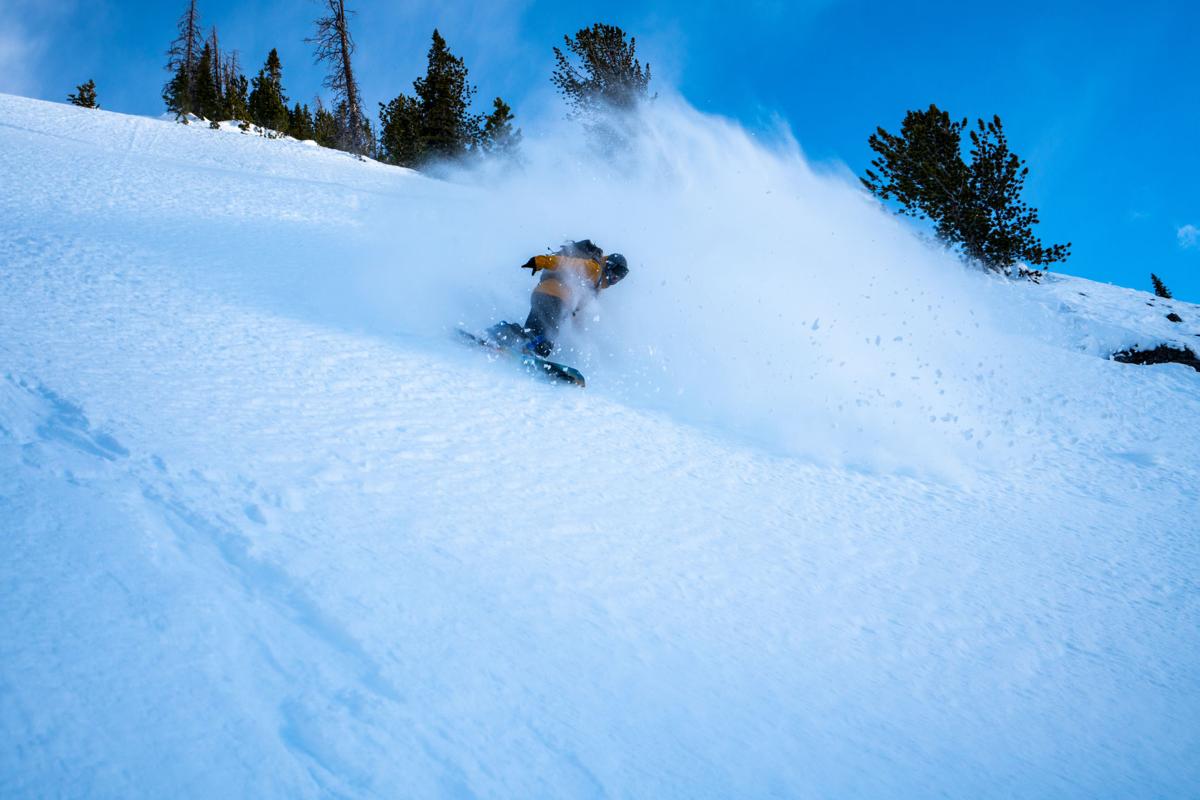 Bryan Iguchi snowboards down a slope during filming of “Roadless” near Yellowstone National Park in Wyoming. (Photo courtesy TGR) 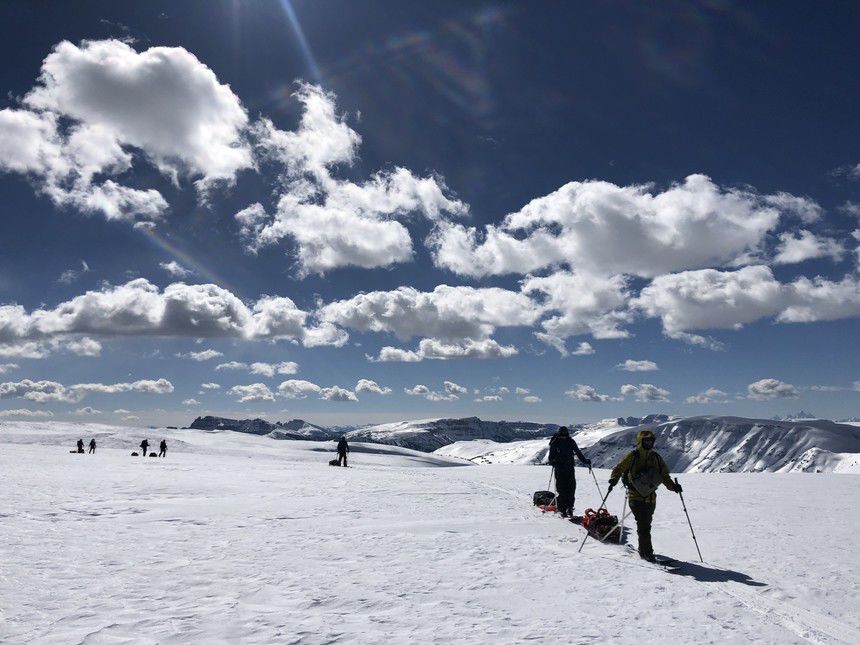 Splitboarders tour through the remote Thorofare in Wyoming during filming of “Roadless.” (Photos courtesy TGR) 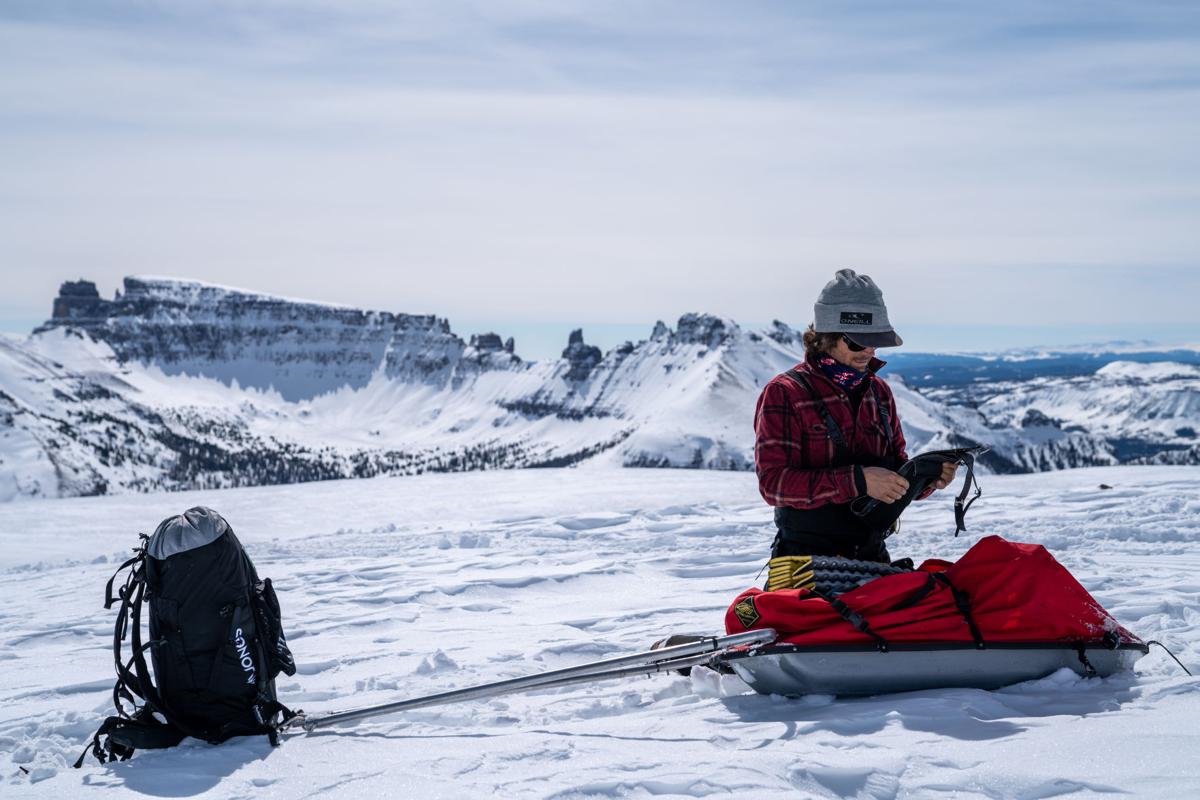 Jeremy Jones loads gear onto his sled during filming of “Roadless” in a remote area of Wyoming. 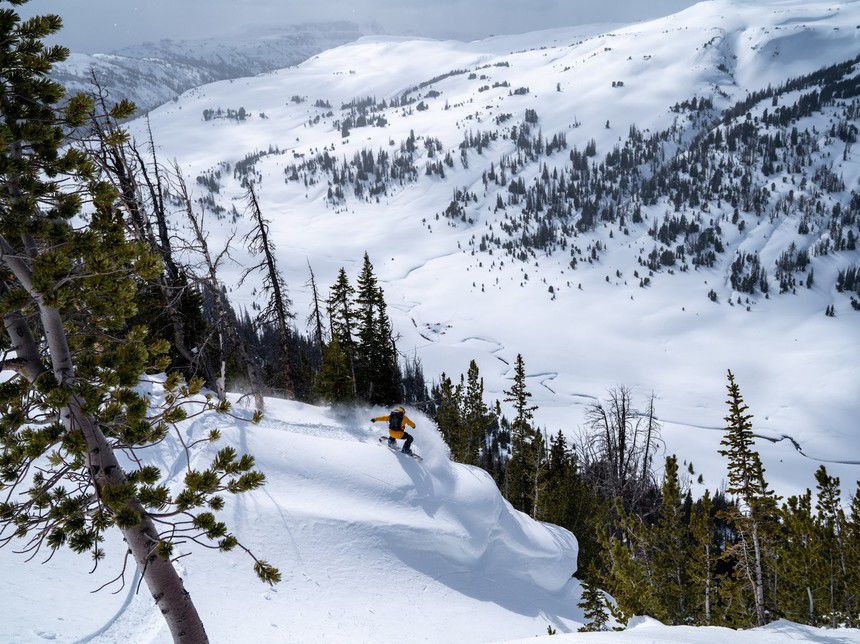 A snowboarder rides remote terrain in Wyoming during filming of "Roadless."(Photo courtesy TGR)

Bryan Iguchi snowboards down a slope during filming of “Roadless” near Yellowstone National Park in Wyoming. (Photo courtesy TGR)

Splitboarders tour through the remote Thorofare in Wyoming during filming of “Roadless.” (Photos courtesy TGR)

Jeremy Jones loads gear onto his sled during filming of “Roadless” in a remote area of Wyoming.

A snowboarder rides remote terrain in Wyoming during filming of "Roadless."(Photo courtesy TGR)

The area is known as the Thorofare, and it is considered by many the most remote place in the lower 48.

In northwest Wyoming, marking the border of Yellowstone National Park and the Teton Wilderness, the Thorofare is a swath of massive plateaus, deep valleys and myriad wildlife, including grizzly bears.

This past March, three renowned snowboarders teamed up with a film crew from Teton Gravity Research (TGR) for a 10-day skinning and snowboarding trip through the Thorofare. The result is a film titled “Roadless,” which is on tour this fall and will be shown at Bend’s Tower Theatre on Oct. 20.

The pro snowboarders in the film include Jeremy Jones, of Truckee, California, and Bryan Iguchi and Travis Rice, both of Jackson Hole, Wyoming. Selected as the big-mountain rider of the year 10 times by Snowboarder Magazine, Jones, 44, revolutionized backcountry snowboarding in “Deeper,” his 2010 film about splitboarding and human-powered adventure.

“This trip, we’d been talking about it for years,” Jones said of the making of “Roadless” during an interview with The Bulletin this week. “The concept of going into one of the biggest wilderness areas and doing the longest self-supported, foot-powered trip that I’ve ever done … I love doing stuff I’ve never done before and stuff that requires all the knowledge I’ve learned over the years.”

All three boarders are former competitors who now spend most of their time finding dramatic backcountry lines for films like “Roadless.”

This film, though, presented a unique set of challenges. Iguchi, 46, had been wanting to explore the Thorofare, and he approached Jon Klaczkiewicz, head of production for TGR, about the possibility.

This past March, after a monthlong storm produced Jackson Hole’s snowiest February on record, weather conditions there cleared. The snowboarders and film crew were able to convene on short notice and head into the wild in late winter.

They used splitboards — which can be separated into two ski-like parts and covered with climbing skins for alpine touring. The board is then put back together for downhill riding. The boarders and film crew hauled behind them sleds loaded with camping gear for the 10-day expedition. Everything was either carried on their backs or pulled behind on a sled, according to Klaczkiewicz.

“We went out on this really high plateau,” Klaczkiewicz recounted this week. “Really the premise was to go and to experience this place. It wasn’t like, ‘Oh, we’re gonna go conquer this mountain or do this or that,’ it was more of waking meditation with the most iconic snowboarders in the sport to just go out and experience the magic of the wilderness back there. The terrain back there is these huge, wide valleys and these plateaus that allowed for us to be able to pull these sleds behind us, which was pretty cool.”

Jones, 44 and a father of two, said he felt like “a stranger in strange lands.” He said it was challenge to adjust to the massive scale of the plateaus, and it was sort of guesswork with the safety of the snowpack. The three boarders found evidence of avalanche activity that made them wary of making turns in one of the most isolated places in the country.

“We didn’t make a turn for three days,” Jones recalled. “We were just trying to wrap our head around the landscape and figure out how we were going to crack into the mountains and start snowboarding safely. It was a very humbling experience, and incredibly remote. On our third day, we made the decision to get down into the valleys where we knew it was safe and go snowboarding. It was delightful and it just changed the whole vibe. We went from three days of slogging to a lot of really fun snowboarding.”

The trip was dramatically different from most on which the snowboarders and film crew had ever embarked. Typically, they have a sort of base camp from where they go out each day to ride and film certain terrain and before returning each night. In “Roadless,” they started out at about 10,000 feet on Togwotee Pass.

Klaczkiewicz said the vast plateaus reminded him of upside-down glaciers.

“All the riding terrain was below us, so it was a little bit of a puzzle to try to figure out, OK, do we drop into the valley here? Where are the lines? How do we figure this thing out?” Klaczkiewicz said. “It was a bunch of challenges trying to figure out the terrain that we don’t typically deal with on a trip like this.”

Another supreme difficulty was dealing with all the camera and film gear. Battling the elements to shoot ski and snowboard films is hard enough as is, but add to that the challenge of carrying all of the equipment to a new camp each day and it becomes infinitely harder.

“It definitely places a much larger challenge on a camera crew when you’re fully self-supported and bringing everything with you,” Klaczkiewicz said. “You have to deal with taking care of yourself in the cold weather, as well as taking care of all the camera equipment. It’s really hard. It’s tough enough to try to keep up with these guys (pro snowboarders) in the mountains, but once you have all that camera gear and you’re dragging a heavy sled and you’re dragging all your camping gear, there’s a hundred different things that you have to deal with and bring with you. There’s just a lot of additional variables when you’re doing a self-supported trip like this.”

But the snowboarders and film crew fought through the challenges to enjoy some truly special, remote terrain. Klaczkiewicz called it a “magical area,” and he said they managed to avoid any grizzly bear encounters.

Jones took advantage of the chance to unplug from the fast pace of the pro snowboarder life and bond with his friends.

“It was a chance to just to slow down and disconnect, and focus on shelter, food and snowboarding,” he said. “It was just a total reset.”