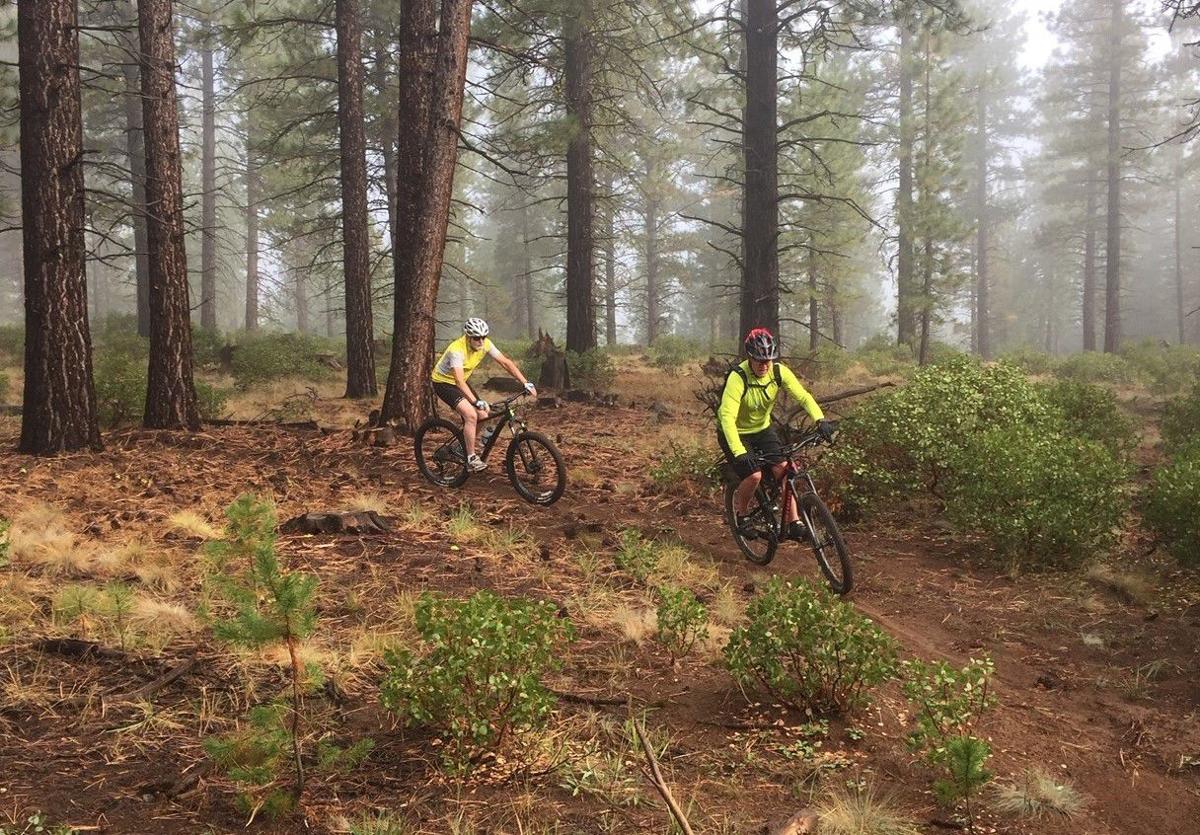 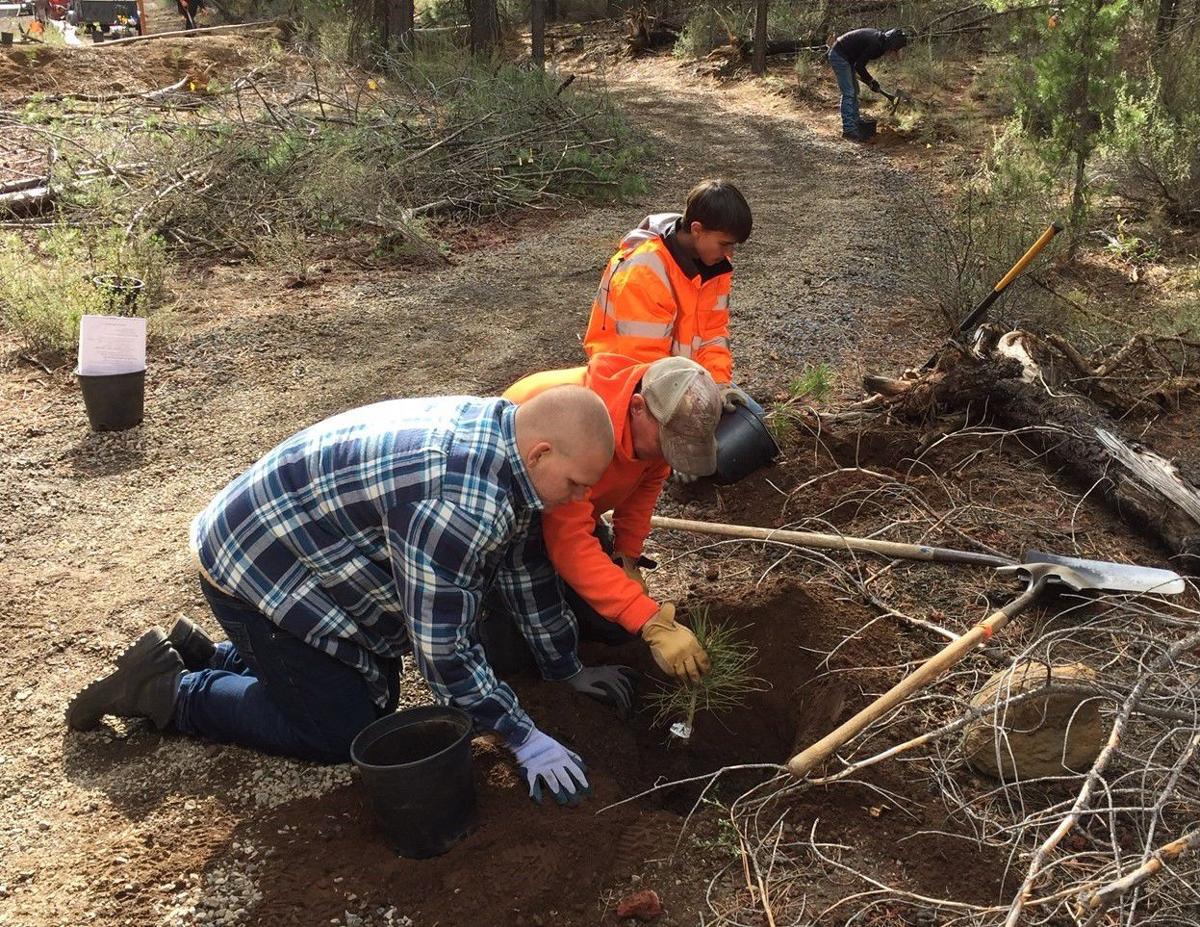 Volunteers plant ponderosa pine trees along a new section of trail in Sunriver.

Volunteers plant ponderosa pine trees along a new section of trail in Sunriver.

Volunteer crews with the Central Oregon Trail Alliance have been hard at work this summer and fall to build 10 miles of new mountain biking and hiking trails that will connect Sunriver to the existing Wanoga and Cascade Lakes Welcome Station trail networks.

After hosting 11 work parties throughout the season, the South Deschutes County chapter of COTA has finished about half of the planned trails, according to Dan Youmans, a representative with the chapter.

The project got a big assist on Oct. 19, when about 30 volunteers convened to plant more than 180 ponderosa pine seedlings along a few areas of the new trails west of Sunriver.

Lee Stevenson, founder of Project Ponderosa, headed up the effort. He says he started Project Ponderosa 15 years ago to engage local students and the community to help restore ponderosas to nearby forests.

Ken Thorp, a Life Skills teacher at La Pine High School, brought some of his students to help with the planting.

“We had to get trees in the ground before we had a hard freeze,” Stevenson says. “We had a lot of people step up and collaborate. The weather was the challenge, but other than that everybody stepped up. There was no whining or sniveling, so it worked out really well.”

The trees were planted along a new family-friendly hiking and biking trail that runs from the Besson day-use area about 11⁄2 miles north.

The trail is actually a decommissioned Forest Service cinder road.

“The former road was pretty straight, and consequently sort of boring,” Stevenson says. We tried to plant the trees to create more curvature in the trail. In five or seven years, after the trees get established, then it won’t seem like a former utility road. It’ll have more of a woodsy feel to it. That was one of our big goals as well, the aesthetics of it. It wasn’t just planting trees, it was placement of them.”

The Besson day-use area has parking space for about 40 cars.

The nonmotorized trail will be packed gravel and much wider than singletrack, so even those with cruiser bikes can ride it, according to Stevenson.

Stevenson is a retired middle school biology teacher and coach who moved to Sunriver from Beaverton 15 years ago.

Since starting Project Ponderosa, he says, more than 18,000 ponderosas have been potted in south Deschutes County, and up to $5,000 has been raised annually and distributed to local schools.

“Ponderosas were cut years ago in south (Deschutes) County and lodgepoles have replaced them,” Stevenson says. “Lodgepoles are not nearly as hardy, so this is my way to get ponderosas planted, raise money and create awareness for the value of ponderosas.”

Youmans says the plan is to have all 10 miles of trail completed by late spring or early summer 2020.

“We’ve made significant progress over the last six months,” Youmans says. “The community support has just been fantastic.”

Cyclists can now ride a basic loop over the Cardinal Landing Bridge in Sunriver and connect with the gravel trail to the Besson day-use area.

“That’s right along the river so there’s some wonderful viewpoints and meadows along the way,” Youmans says.

“I think that’ll be a really popular trail. It’s a great connection between all of the paved trails in Sunriver to the forest trails.”

No signage exists on the trails yet because junctions and endpoints are still being designed and implemented, according to Youmans.

Eventually, three kiosks with maps and interpretive boards will be built in the new trail system.

The project also involves restoring and preserving nearby elk habitat with some trail and road obliteration work.

Lots of work remains to connect the trails from Sunriver to the Tyler’s Traverse and Catch and Release trails to the north.

“The big section we still have left is to the west of Road 41,” Youmans says. “But we’re feeling really good about the trails we’ve built so far.”