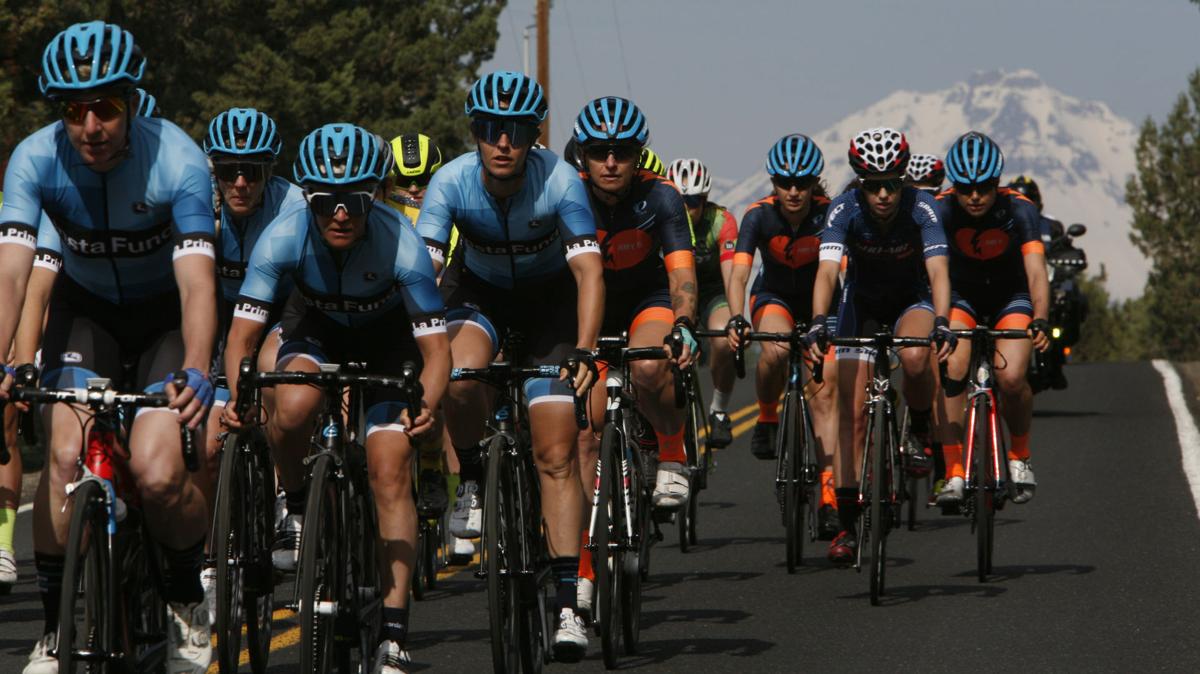 Pro women’s racers compete in the first stage of the Cascade Cycling Classic, the Tumalo Circuit Race, in 2019. 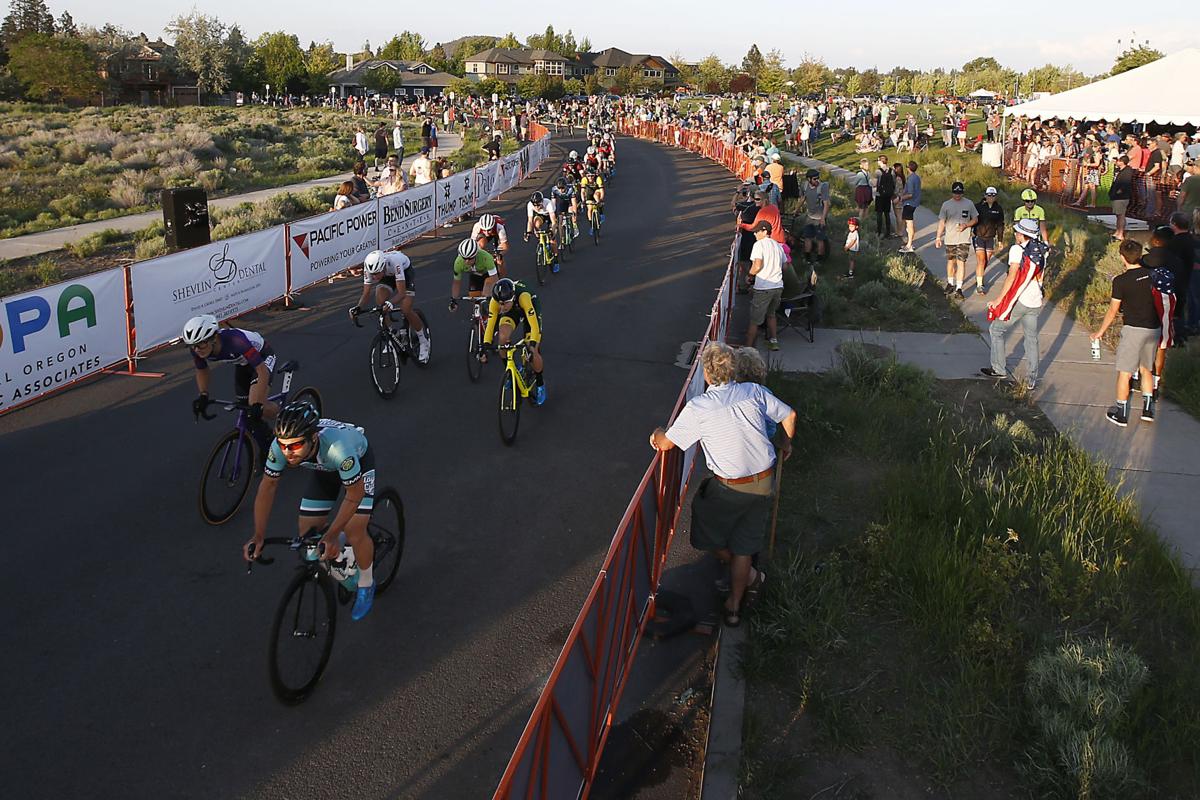 Pro men racers make their way along the course during the Twilight Criterium at the 2019 Cascade Cycling Classic in Bend. 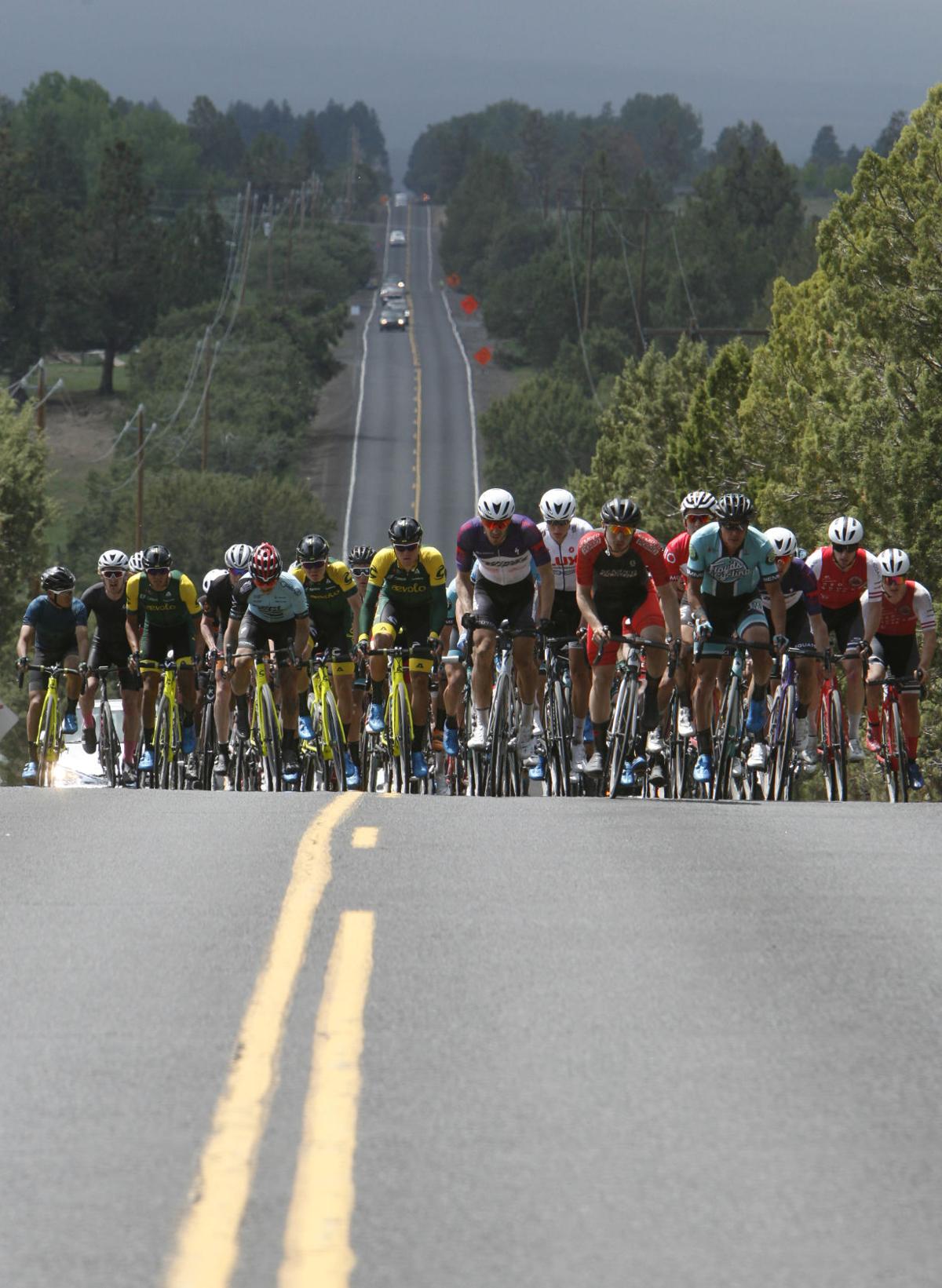 Pro men compete in the Tumalo Circuit Race, the first stage of the Cascade Cycling Classic, in May 2019. 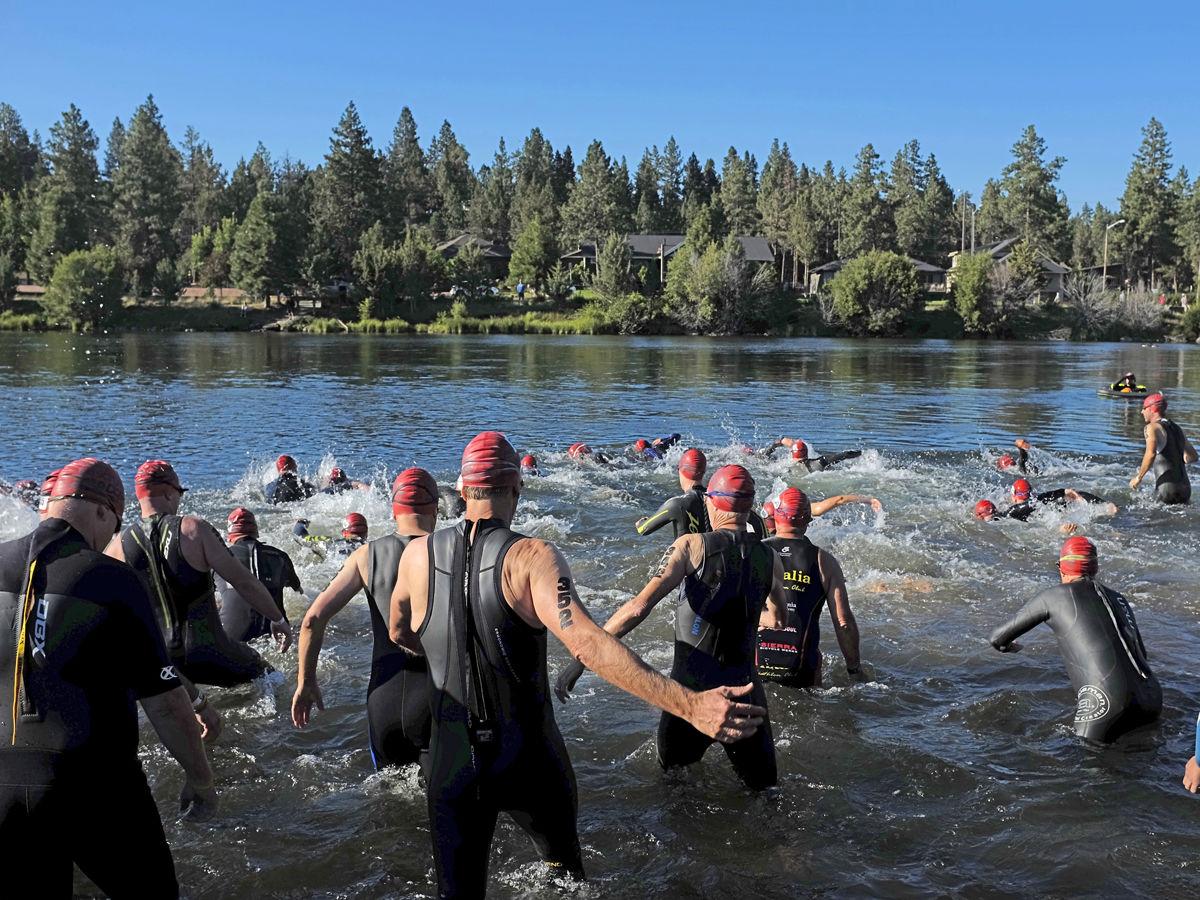 Competitors in the Deschutes Dash sprint distance triathlon start their downriver swim during the 2015 competition. 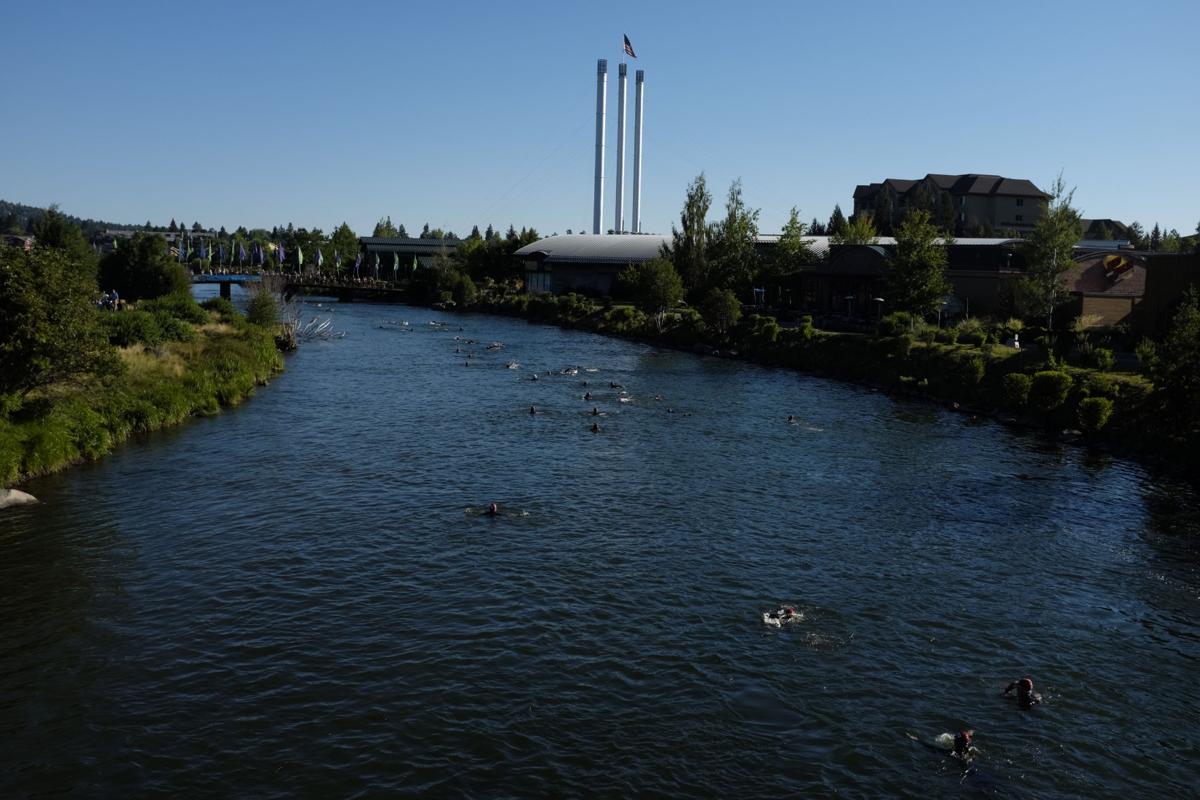 Competitors in the Deschutes Dash sprint distance triathlon make their way downriver during the 600-meter swim leg of the race near Riverbend Park in Bend in 2015. 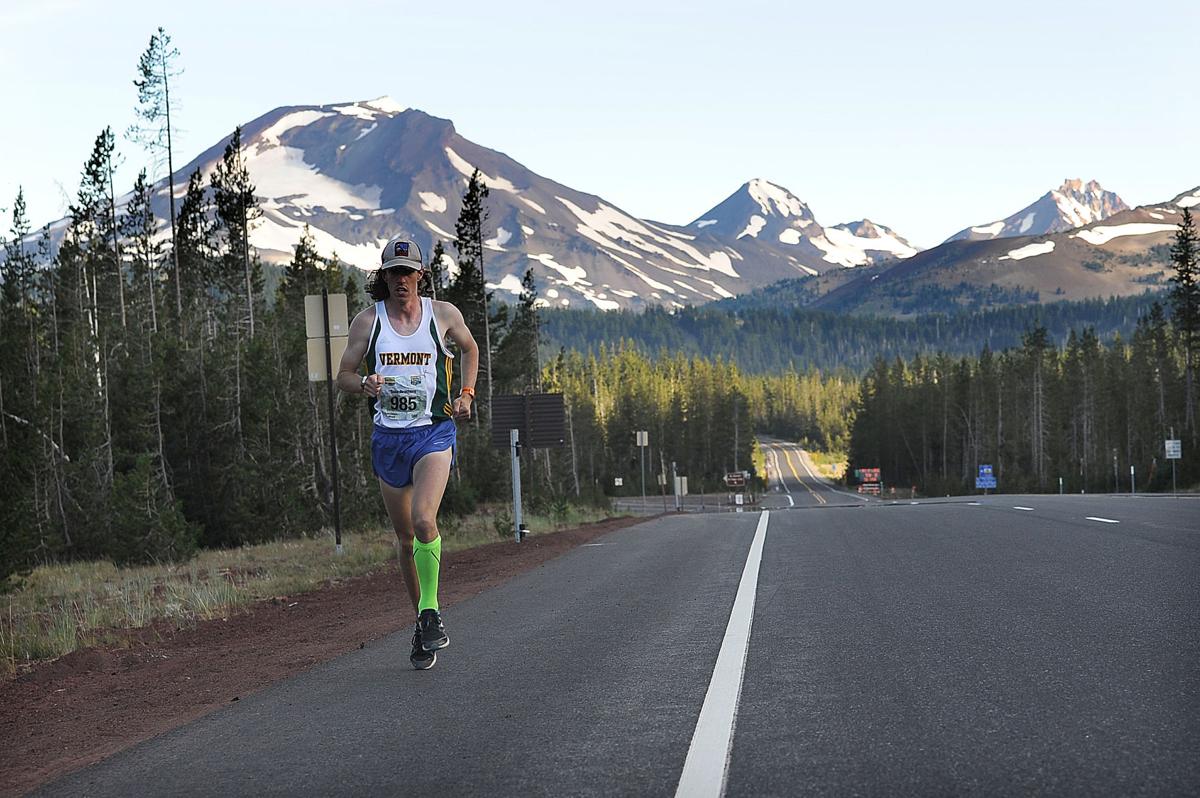 A runner cruises along Century Drive while competing in the 2017 Cascade Lakes Relay. 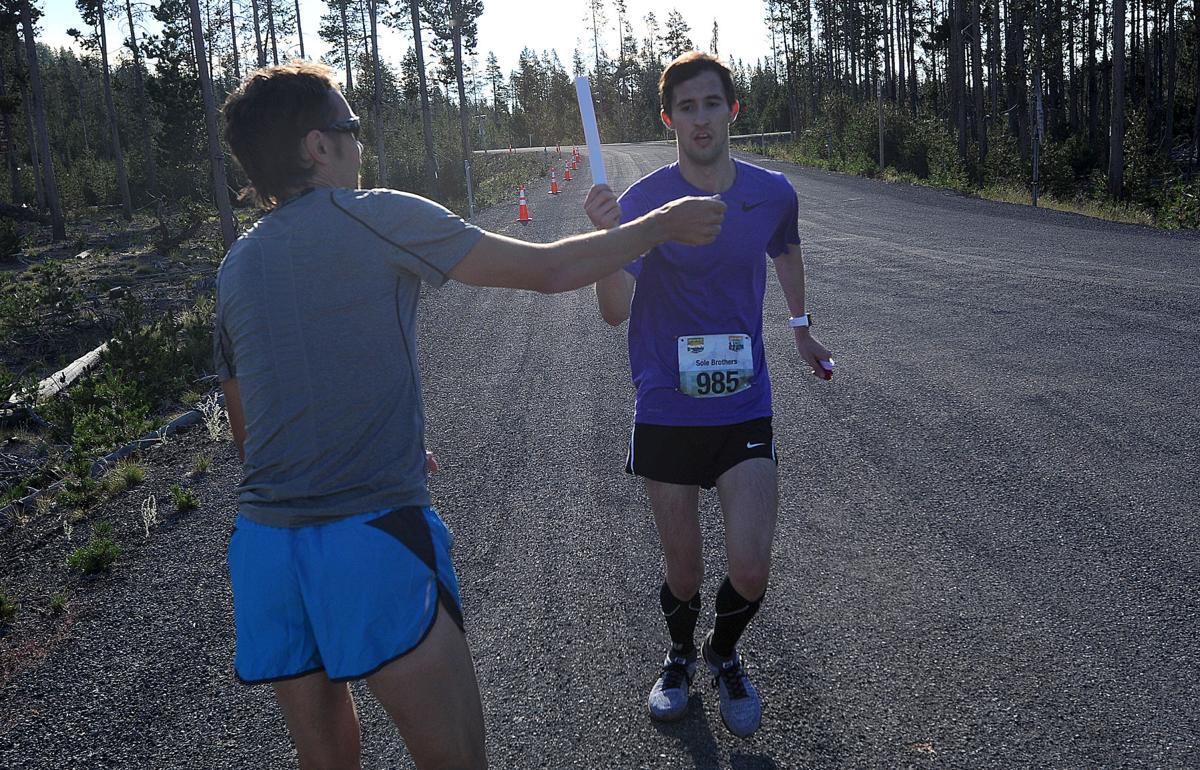 Ryan Wilson prepares to slap the bracelet on the wrist of his teammate, Ryan Ness, while competing with the Sole Brothers team in the 2017 Cascade Lakes Relay.

Pro women’s racers compete in the first stage of the Cascade Cycling Classic, the Tumalo Circuit Race, in 2019.

Pro men racers make their way along the course during the Twilight Criterium at the 2019 Cascade Cycling Classic in Bend.

Pro men compete in the Tumalo Circuit Race, the first stage of the Cascade Cycling Classic, in May 2019.

Competitors in the Deschutes Dash sprint distance triathlon start their downriver swim during the 2015 competition.

Competitors in the Deschutes Dash sprint distance triathlon make their way downriver during the 600-meter swim leg of the race near Riverbend Park in Bend in 2015.

A runner cruises along Century Drive while competing in the 2017 Cascade Lakes Relay.

Ryan Wilson prepares to slap the bracelet on the wrist of his teammate, Ryan Ness, while competing with the Sole Brothers team in the 2017 Cascade Lakes Relay.

Outdoor athletic events are a spring and summer tradition in Bend, part of the deeply rooted fitness and endurance community of Central Oregon. Events like the Cascade Cycling Classic, Deschutes Dash triathlon and Cascade Lakes Relay have become staples that cyclists and runners look forward to every year.

“It’s part of the local economy, and part of the fabric and local culture of who we are as a city and as a region,” said Bend City Councilor Anthony Broadman, himself an avid cyclist.

But if and how some of these events will be staged this year remains unclear as the COVID-19 pandemic continues into its second year.

The 40th edition of the Cascade Cycling Classic, scheduled for June 2-6 after being canceled last year, is in doubt again as organizers scramble to find ways to safely stage the event that draws hundreds of professional and amateur cyclists to Central Oregon.

If the cycling classic does take place, it will likely be moved to August and based out of Madras rather than Bend, according to Chuck Kenlan, executive director for the Oregon Bicycle Racing Association, which sanctions the event.

“I’m pretty sure that it might just hold off another year,” Kenlan said. “It’s getting more and more challenging to permit events. We’ve got some welcome arms in Madras, to race out of there, and there’s some really good race options there.”

The trend of races moving out of Bend was prompted by the Bend City Council’s 4-3 vote in March to not grant a special events permit to the Bend Marathon, originally scheduled for April 18. This forced the event to go virtual for the second straight year. Broadman was in the minority.

But a more recent emergency order allows the city of Bend to look to state COVID-19 safety guidelines to decide whether an event should receive a permit, Broadman explained.

“I think there’s a recognition now that there’s a safe way forward here,” Broadman said. “They (Bend Marathon organizers) just got stuck at a weird time, because they did need a city permit. If the state says something is safe, I want to take as broad a view as possible. It appears to me that outdoor activities are pretty safe, and we need to get people looking forward with cautious optimism — part of that is racing.”

But just what the state will allow for outdoor athletic events is confusing and constantly changing.

“It’s hard to get a straight answer from the Oregon Health Authority,” Kenlan said. “It’s OK to have 6,200 people in Providence Park (in Portland) for a soccer game, but it’s not OK to have 1,000 people spread out over a marathon course?”

“Our goal is to create a unified voice, so we have a collective body that has a voice at the table when an event needs a permit,” Douglass said. “If we all have to produce our own COVID safety plan, there’s going to be some inconsistencies. If you’re a (events coalition) event, you are agreeing to a certain standard for safety for our community. All the events will follow a standard, so everybody knows what to expect.”

Douglass and other event organizers also want to ensure the public that these events can be staged safely.

Douglass said that most events currently scheduled are ones that have moved out of Bend to private property, national forest land, or Bureau of Land Management land. (The Salmon Run half-marathon, 10K and 5K, usually held at Bend’s Riverbend Park, was staged at Pronghorn Resort, east of Bend, on Saturday.)

Originally scheduled for May 15, the Pole Pedal Paddle — which draws 2,000 to 3,000 racers and includes alpine skiing, nordic skiing, road cycling, paddling and running on a course from Mt. Bachelor ski area to Bend — was canceled in early March for the second straight year. The PPP had been staged every year since 1977 until last year.

The Cascade Lakes Relay, started in 2008, is the largest outdoor athletic event in Central Oregon, with about 3,500 runners each year. The relay has always used wave starts, which makes it naturally COVID-19 safe. But Douglass said he might need to move the finish line from Riverbend Park to perhaps the Seventh Mountain Resort or Wanoga Sno-park, both located a few miles southwest of town.

“The vision of events in Bend this summer can’t be, ‘Well, just wait and see,’ because the challenges we face as event organizers is that some of our events take a year of planning,” Douglass said. “It’s not feasible. We’ve invested hundreds of thousands of dollars. To not have assurance you can have the event is really hard. It’s hard for participants, too.”

Deschutes Dash race director Colleen Peterson wanted to ensure the 17th edition of the triathlon and duathlon event could be staged live this year after going virtual last year, so she moved the event from Bend to Wickiup Reservoir after acquiring a permit through the Deschutes National Forest.

“We can spread out a little more,” Peterson said. “We don’t need as many volunteers. It just made a lot more sense. The city is starting to issue permits for the summer, but we were just a little ahead.”

Instead of a mass start swim, swimmers will start two at a time, Peterson said. The Deschutes Dash has hosted as many as 800 competitors in years past but is capped at 500 this year.

“If you can spread out a little bit more, you can put on a safe event,” she said. “Right now, people are just taking things day by day and making adjustments, and making it so we can have these live events, and people can feel some sense of normalcy.”