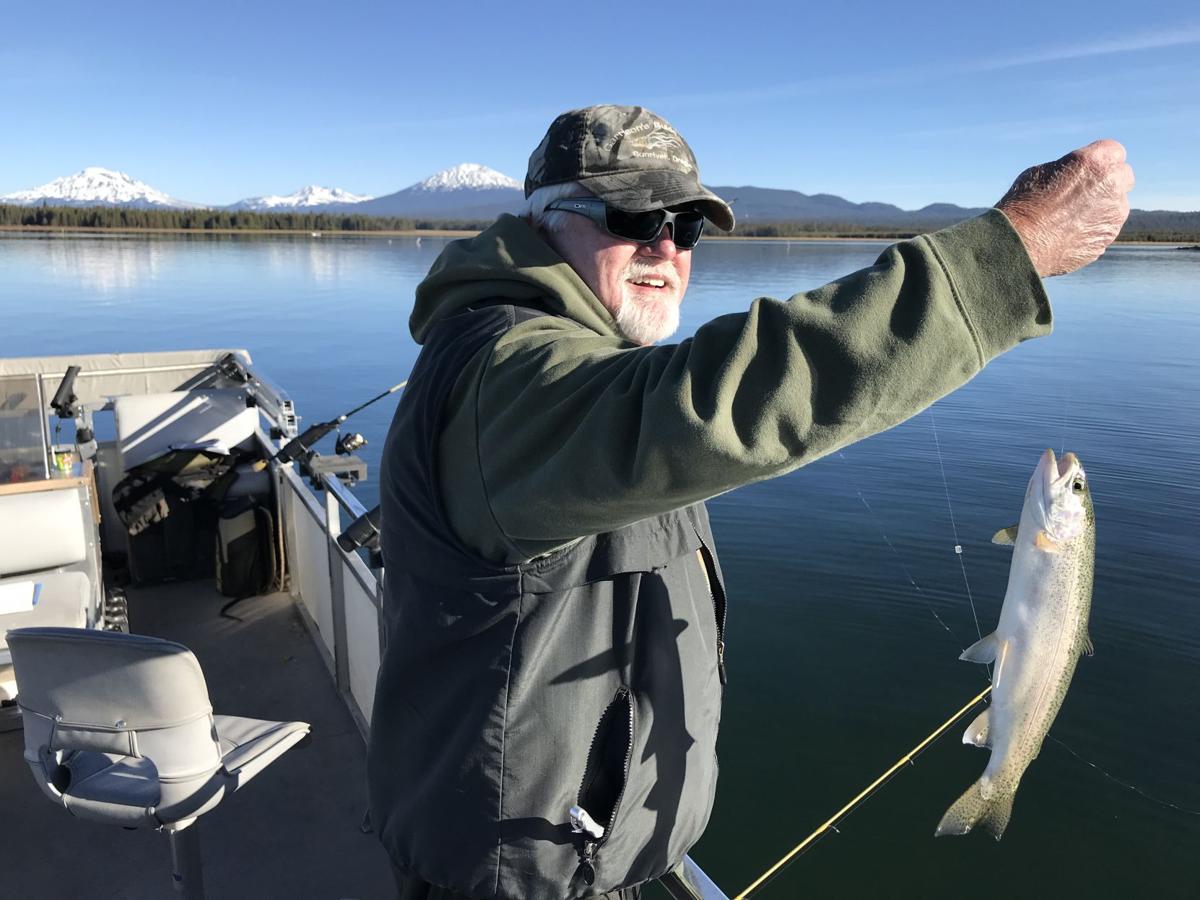 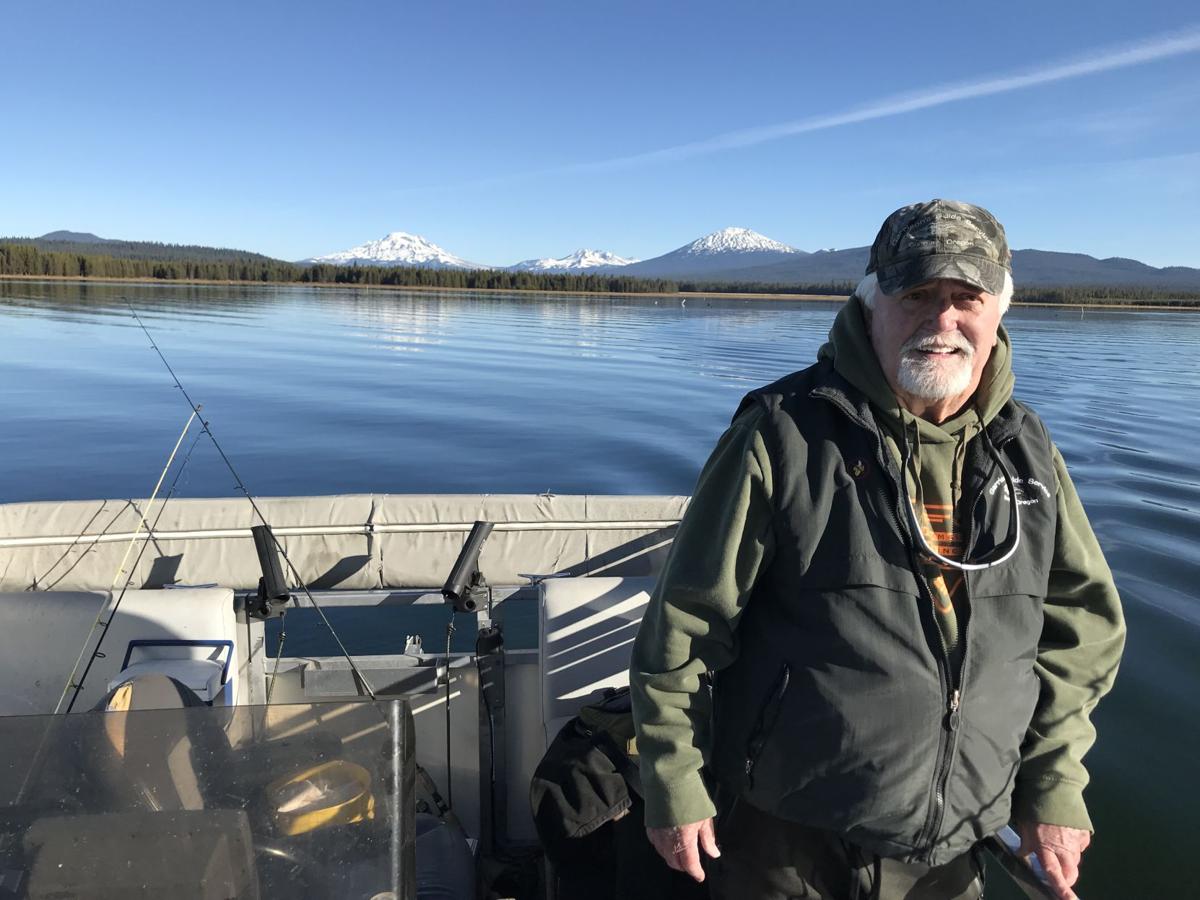 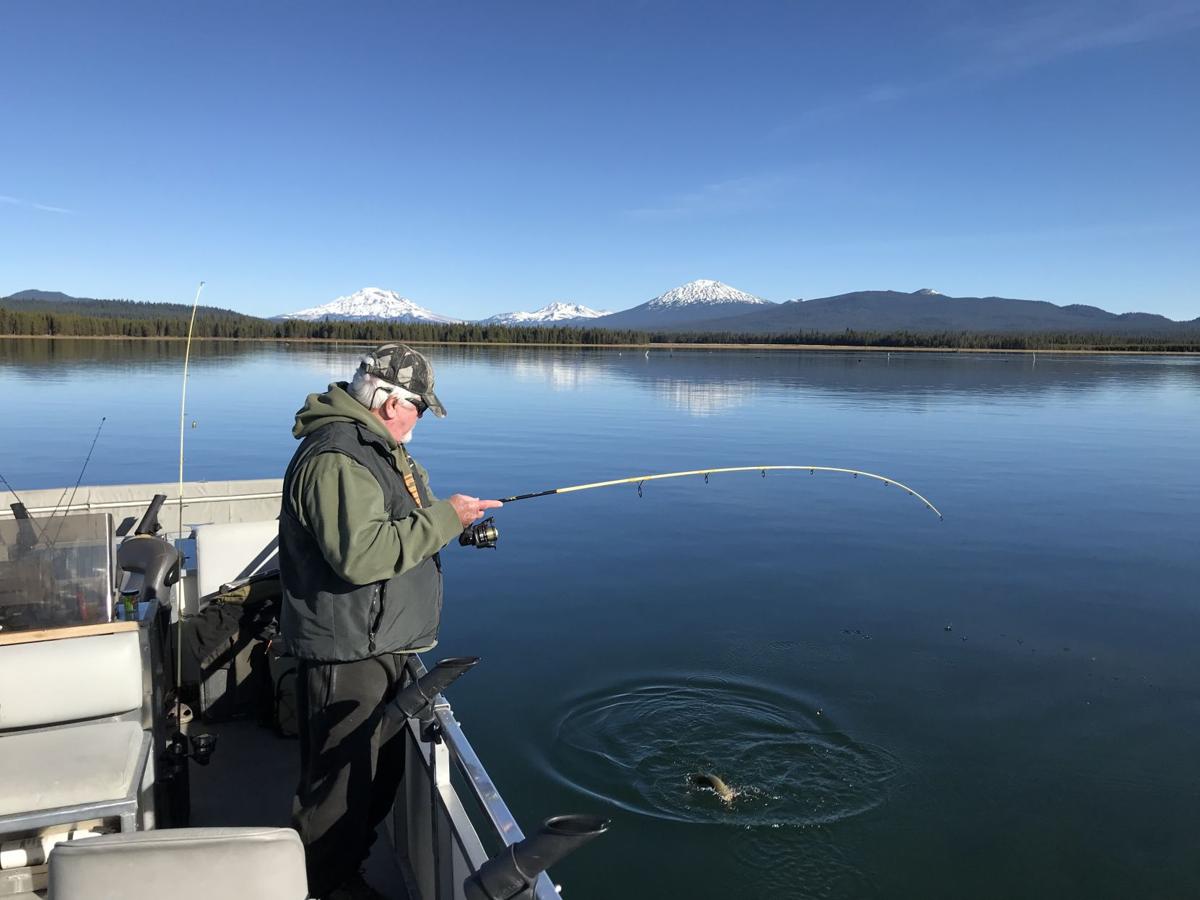 John Garrison has a favorite slogan that he shouts right after the first fish of the day is caught and brought to the boat.

“If the boat gets skunked,” he proclaims to all aboard, “you get a free trip to Hawaii!”

In 35 years as a fishing guide on Central Oregon waters, Garrison has given away exactly zero free trips to Hawaii.

“I don’t tell them about Hawaii until after they catch a fish,” he admitted late last month during an outing on Crane Prairie Reservoir. “I do know when to say it.”

Garrison, 77, has another favorite saying: “If you do it all the time, you’re good at what you do.”

Garrison is good at fishing. But perhaps more to the point, he is good at guiding. He has spent the better part of four decades helping folks catch fish — lots of fish — on the high lakes of Central Oregon.

I joined Garrison on Crane Prairie for one last trip with Garrison’s Guide Service. It was the typical sort of trip that I have experienced with him over the years since I first fished with him in 2006.

He yelled at me, I yelled back, and we caught and released nine big rainbows.

“We always catch fish, and we always catch quite a few fish,” said Jerrie Rauch, of  Eugene, who with her husband has booked numerous trips with Garrison over the years. “I have to say, when I first met John, I thought he was kind of cranky. It was ‘Do it my way and you’ll catch fish.’ And then after fishing with him a dozen times more, he knows what he’s doing, and he’s a teddy bear in reality. At first I was very intimidated. But he knows his fishing, so do what he says.”

Fishing from his pontoon boat in the Deschutes channel of Crane Prairie, ­Garrison reminisced about some of his favorite experiences guiding on Central Oregon’s richest trout waters as a clear, frigid fall morning gave way to perfect autumn angling conditions.

His career as a guide service owner, he reflected, was actually more about the people than the fish.

“Just knowing a lot of good clients that I’ve had for years and years …” Garrison said. “They come back each year, and their kids come back. It’s been good, but it’s time now.”

Garrison moved to Central Oregon from Pasadena, California, in 1972. On a trip to Canada he had driven through Bend and “liked the looks of it.” He moved to Bend with “no job, no nothing.” He decided he wanted to be a fishing guide and found two partners to form a three-person guide service, because the ­Deschutes National Forest would allow only one outfitter on its lakes at that time. (Now, there are seven permitted guide services on the Deschutes National Forest.) Eventually, Garrison’s partners moved on.

“After about a year, I was the only one left,” Garrison recalled as we fished. “So I called it Garrison’s Guide Service.”

He said he made $4,200 that first summer. During the winters, he worked at the Country Store in Sunriver. Eventually, the guide service was all he needed to make ends meet.

Garrison took clients from late spring through early fall to all the high Cascade lakes, but his most frequent spots were Crane Prairie, East Lake and Lava Lake.

“The bottom line is, they’re gonna catch fish,” Garrison said. “That’s what they hired me for. It’s such a good fishery. I’ve had slow days, hell yes, but it’s called fishing, so you don’t know.”

In the winter and early spring, Garrison would take customers to chase bull trout on Lake Billy Chinook. The biggest bull he ever landed out of the lake was 14 pounds, he said. His biggest rainbow trout was also 14 pounds, out of Crane Prairie. And a client once caught a 13-pound brown trout on Wickiup Reservoir.

Garrison handled all the spin fishing and employed six other guides — mostly school teachers who are free in the summers — to take clients fly-fishing.

Cody Herman, who bought Garrison’s business, said he plans to follow a similar format. Herman is a spin fishing guide from Portland who jumped at the chance to move to Central Oregon and guide on the high lakes. He is changing the name of the guide service to Day One Outdoors, the name of the guide business he has owned and operated in Portland for the past nine years.

“This was definitely a great opportunity to grow my business but also better the qualify of life for me and my wife,” Herman said recently. “It’s definitely daunting. I have fished those high mountain lakes and rivers, but it’s a new animal. And that’s the exciting part for me. Fishing out here (the Portland area) can become monotonous, so this is a way to reinvigorate my love of fishing, too.”

Herman added that he plans to learn much from ­Garrison before getting started next spring.

Garrison’s wife, Carol, said it was hard for her husband to sell his guide service after so many years. But they believe it is in good hands with Herman.

“I think for anybody, if you have a job that you love, you usually work as long as you can, physically and mentally,” Carol Garrison said. “This is one of the those jobs, that, it’s his (John’s) love, it’s his passion. But we feel extremely comfortable with Cody. It’s not so much the money, but it’s about the right individual.”

Carol noted with a laugh that now Garrison will have more time to help her around the house and the yard. They said they plan to remain in Sunriver when not traveling to visit the four grown children and six grandchildren they have between them.

“I think it’s really good for him to be retiring,” Carol said. “He’ll get more exercise because he won’t be sitting in a boat.”

Garrison said he plans to keep his 22-foot pontoon boat and perhaps take customers out every now and then for Herman.

On Garrison’s boat on Crane Prairie, we used ­PowerBait to land nine rainbow trout in the 15- to 20-inch range, including two hefty ones well over 20 inches long.

“See how easy this fishing is?” Garrison said. “Pretty simple. You obeyed the laws that I put forth and you caught fish. See what you’ve learned after all these years? You do what the guide says and you’ll catch fish.”

Hawaii will have to wait.