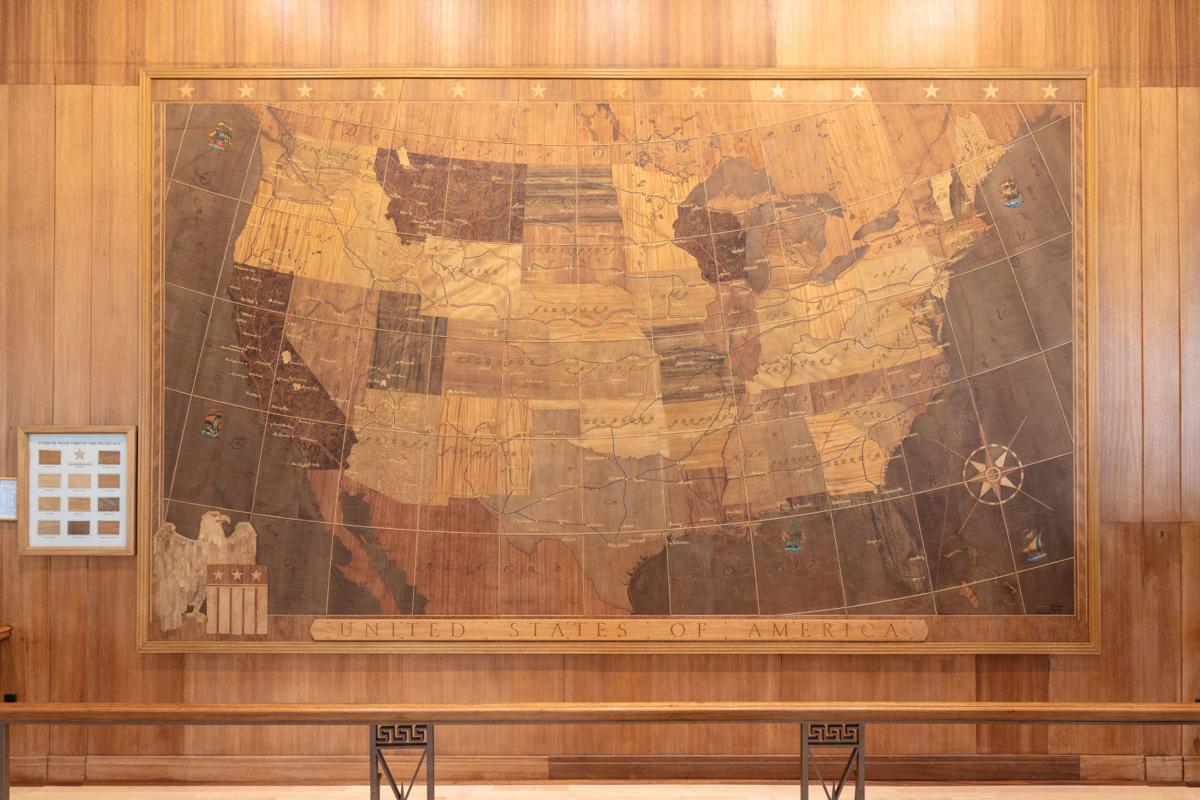 The newly restored Reamer Map is made from 2,500 pieces of 14 different hardwoods.(Jacob W. Frank/NPS) 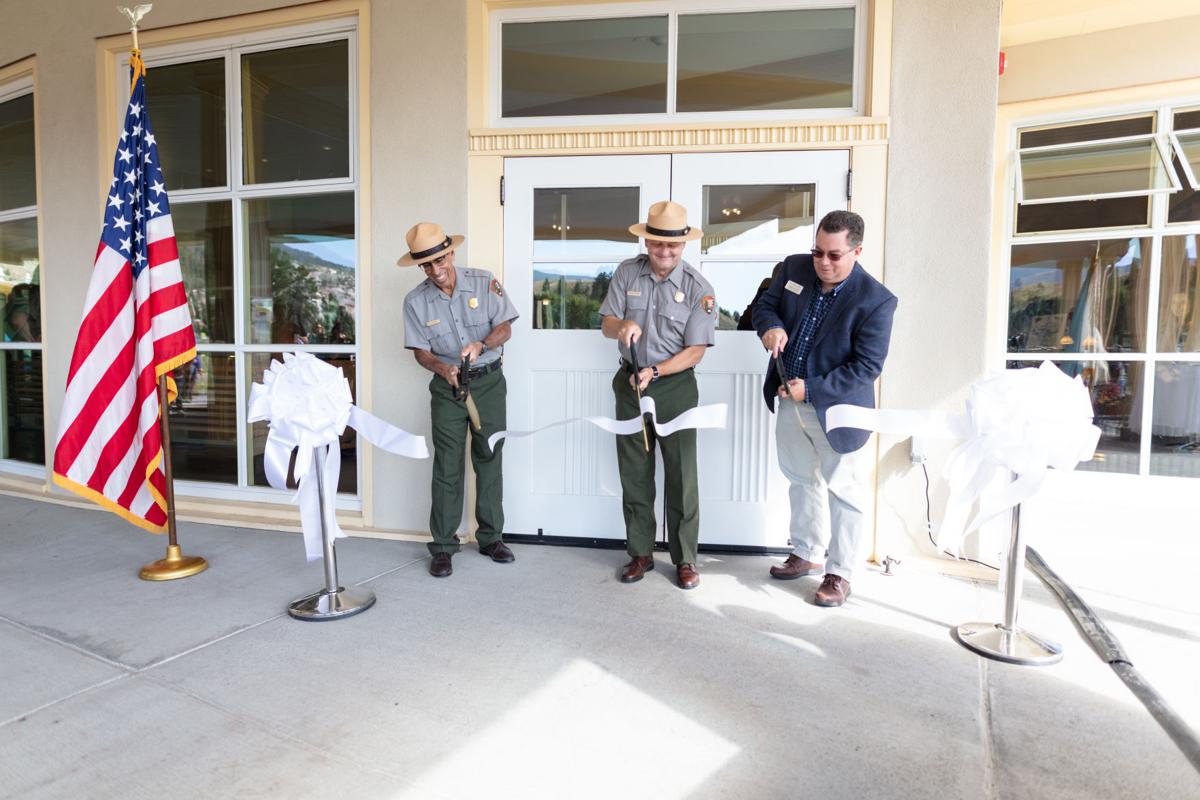 The newly restored Reamer Map is made from 2,500 pieces of 14 different hardwoods.(Jacob W. Frank/NPS)

MAMMOTH HOT SPRINGS, Wyo. — With its interior walls torn out and old wiring exposed, the Mammoth Hotel’s skeleton seemed eerie to Dean Heppner as he helped with renovation of the 106-year-old building during the past four years.

“It was a chance to see stuff nobody else could see,” said the Yellowstone National Park maintenance worker.

On Friday his grandson, 9-year-old Dominyk Weber of Huntley, got to celebrate the completion of that restoration work — overseen by general contractor Swank Enterprises — as he was the first through the doors following a ribbon-cutting ceremony attended by about 100 people.

“I thought it was going to be pretty fun,” Dominyk said of running through the doors, his arms raised in celebration.

Prior to that, dignitaries celebrated the partnerships necessary to accomplish the $30 million remodeling and rebuilding project for a hotel that annually hosts about 95,000 visitors. That shout-out included the hotel workers who daily greet guests, clean the rooms and make the beds.

“None of this happens easily,” said Cam Sholly, Yellowstone superintendent. “It’s people and partners who make these things happen.”

Investing in high-impact projects like the Mammoth Hotel is one goal of the National Park Service at a time when the agency is plagued by a $586 million maintenance backlog, Sholly added. With the work done, that backlog has been reduced by $10 million.

“We have some of the most important cultural and historic resources in this park right here,” he said.

Investing time and money in such projects is not only important to the park, but also to the country as a whole, Sholly added.

The original hotel Mammoth, called The National Hotel, was completed in 1883 as a place for well-heeled travelers from the East to stay while exploring the geysers, hot pools and fumaroles of Yellowstone’s wonderland via stagecoach and following a long train ride west.

“This (hotel) really set the tone for the visitor experience in Yellowstone,” said Mike Keller, general manager of Yellowstone National Park Lodges, the park’s hotel concessionaire and a partner in the remodeling.

The National Hotel was so upscale that when cottages were built behind the facility for visitors traveling by automobile in the early 1900s, those customers weren’t allowed inside. They couldn’t even enter the Map Room, featuring a map of the United States constructed out of 14 hardwoods in 2,500 pieces that together create a 10-by-17-foot wall hanging. The map had been commissioned by Adelaide Child, widow of the president of the Yellowstone Park Association, owners of the hotel.

“The Map Room was only for the guests of the hotel,” said tour guide Leslie Quinn, “not that riffraff staying in the cabins.”

Hotel guests back then, despite their prominence, had to share a bathroom. With the most recent remodel completed, that’s no longer the case. All rooms now have private baths.

“You can experience the history yet have modern conveniences,” said Peter Galindo, Yellowstone project manager.

It was Galindo who helped shepherd the project with architects, engineers and contractors while coming in at 3% under budget.

“We all realized this was our chance to get it right,” he said.

He compared the work — which included laboring in subzero winter weather — to raising a child.

“They get under your skin,” he said. “You take ownership of them.”

The changes were more than apparent to Tom Carter, who worked out of Mammoth for six summers as a tour guide in the 1970s.

“It’s beautiful. They did a great job,” he said.

Back in the ’70s, Carter said his shared office was painted a bland “government green.”

Now the same area has been converted into hotel rooms and conference rooms, the hallway featuring wood wainscoting and the curved handrails on the stairs hewn piece by piece by a Livingston craftsman.

That was partly because the hotel hadn’t received a major update since the 1950s.

Prior to that, architect Robert Reamer had overseen two major remodels of the structure, the last occurring in the 1930s.

Ruth Quinn, who authored a biography of Reamer, said those re-creations of the same building “illustrate to me how innovation and imagination can be used to alter buildings to suit our modern purposes by recycling and reusing what’s existing while still preserving the historic landscape.

“In the different times (Reamer) remodeled the hotel he was always incorporating something that was here already, but changing it to meet the visitors’ needs of that day.”

She thinks Reamer would approve of the Mammoth Hotel’s latest structural updates to make the facility more durable to withstand earthquakes while also adding details like light fixtures and insulation to lessen the hotel’s utility use.

“Reamer was always creative in his buildings, but he was also always recognizing his clients and what their desires were,” she said.