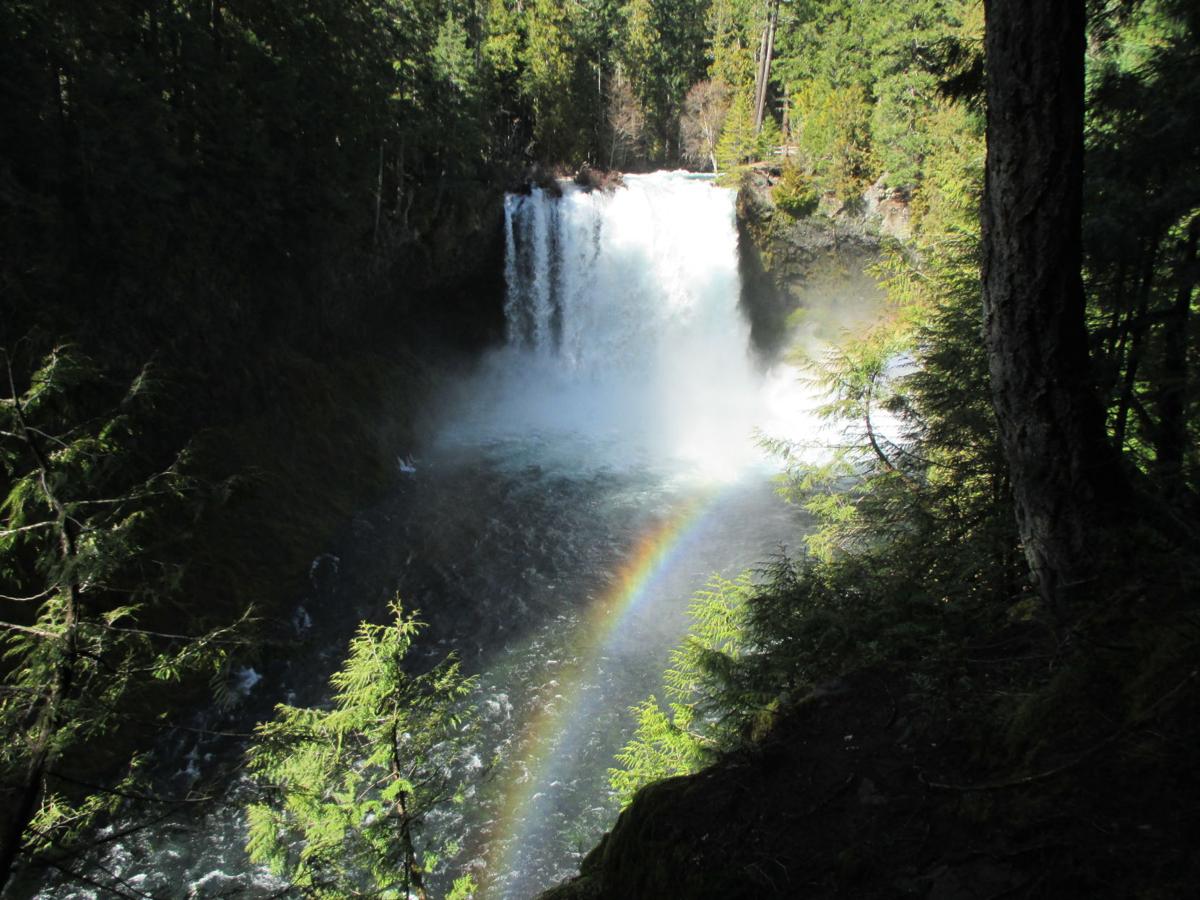 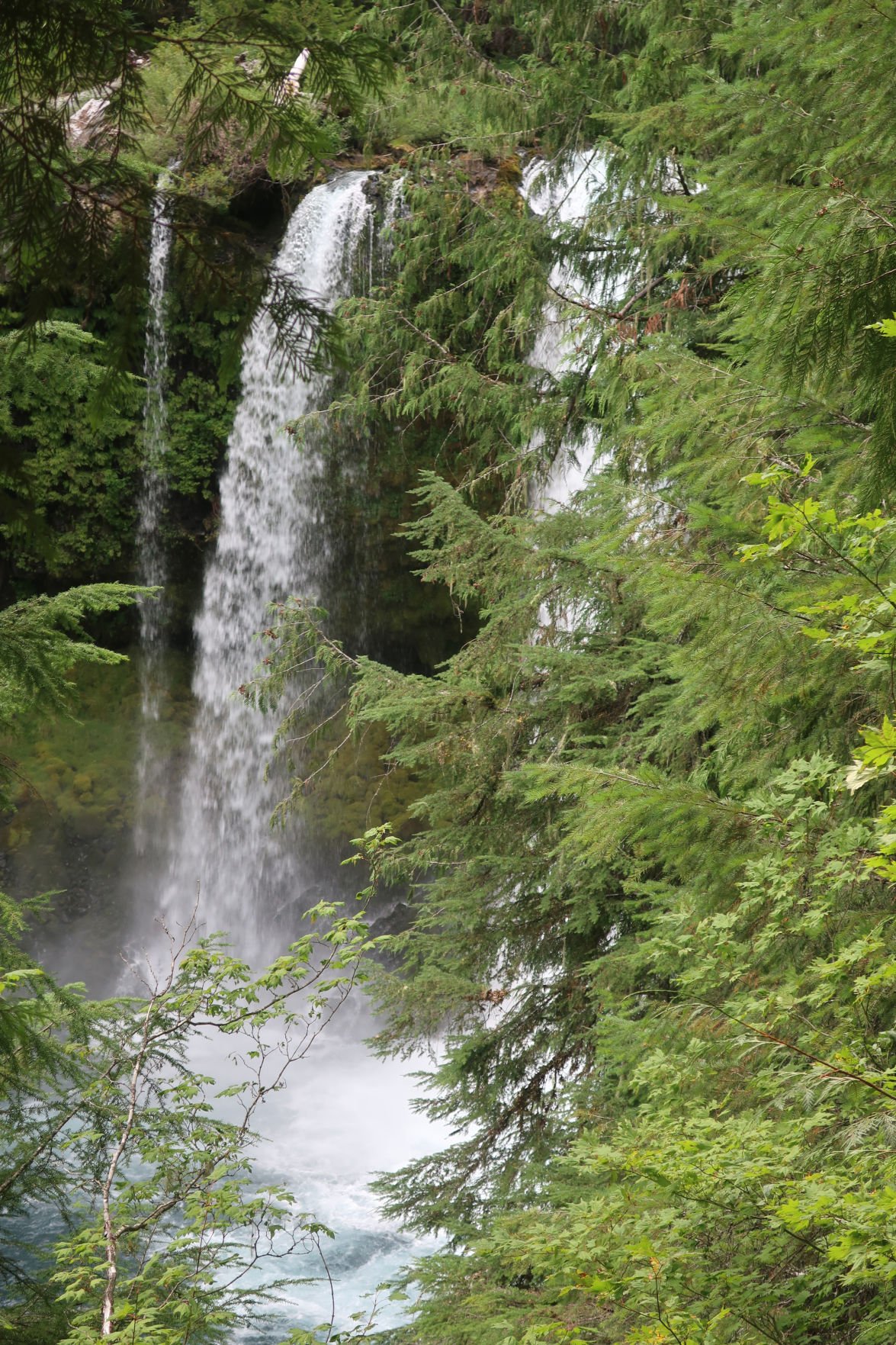 It was the final morning of our too-brief four-day camping stay in the Central Oregon Cascades. Each of the three previous days Steve Underwood and I had enjoyed a series of sometimes challenging but always dazzlingly scenic hikes.

Where, we pondered, should we hike on our final morning?

We studied my tattered “100 Hikes in the Central Oregon Cascades” book, one of a series of quintessential Oregon hiking guidebooks by William Sullivan. Thumbing through its crumpled, well-used pages, we considered several enticing choices, but some involved daylong commitments or required driving miles and miles of bumpy dirt roads to trailheads. Sitting at the picnic bench at our campsite at the Ice Cap Campground, inspiration struck.

Our first day of hiking had included a stunning loop walk from the campground past Sahalie Falls and Koosah Falls.

Called the Waterfall Trail, it was an easy 3-mile trek that included a small section of the McKenzie River Trail. But our hike took considerably longer than expected because of frequent side trips to a series of jaw-dropping overlooks of the two tumbling waterfalls along with an unnamed roaring rapid, plus stops to marvel at the river’s wildly frothing whitewater. Fast and furious! Whamming and slamming!

So … how about an encore hike, this time in reverse.

The second time around didn’t disappoint. From the campground we headed south, crossing the bridge where the McKenzie spills into the Carmen Reservoir to the west side of the river, which is part of the 261⁄2-mile-long McKenzie River Trail. (A few days earlier, one of our several hikes had been downstream to the Tamolitch Pool, where the McKenzie reappears after disappearing upriver into a lava flow. But that’s another story.)

Even without the waterfalls, the trail is pure delight, passing through thick forests of Douglas firs and red cedar, spatterings of Solomon seal and fireweed and one lucky sighting of what Stevie identified as a Pacific newt, a lizardlike critter that lives under stones or trees in streams and moist forests.

Because most visitors view the waterfalls from two signed viewpoints that are easily accessed from busy state Highway 126, which parallels the east side of the McKenzie, the trail on the river’s west side has far fewer hikers. And while the east side has excellent overlooks, west-side views of the pounding waterfalls and the rushing river are even more dramatic.

We stopped along vantages offering sightings of Koosah Falls. At the falls the McKenzie temporarily forks into two sections, with whitewater thundering over a 70-foot-high drop like two strands of beautiful long blond hair. Adding to the magic was the morning light, which created a multicolored rainbow in the pool below the falls. Koosah, according to Sullivan, means sky or heaven in the Chinook language — and heavenly it is.

Otherworldly, too, is what most would consider a waterfall between Koosah and Sahalie. The unnamed wide cascade crashes down a wide swath of river.

A short distance upriver is Sahalie, a 100-foot waterfall that also created a magical rainbow mist. We explored the Waterfalls Trail’s many vantages of Sahalie, some excitingly close to the river, others offering dronelike views. From overlooks slightly downstream, we enjoyed Sahalie’s cooling mist and the wildly barking sounds of the falls and river.

We crossed the wooden bridge above Sahalie to the trail’s east side. From beautiful rail fence overlooks, just steps from parking areas, passersby stopped and gawked, snapping selfies. Some quickly returned to the highway, while others, enticed by the easy views, satiated their curiosity by heading up or down the Waterfall Trail for more.

Two times along the Waterfall Trail proved terrific and tantalizing. Three times would be even better.