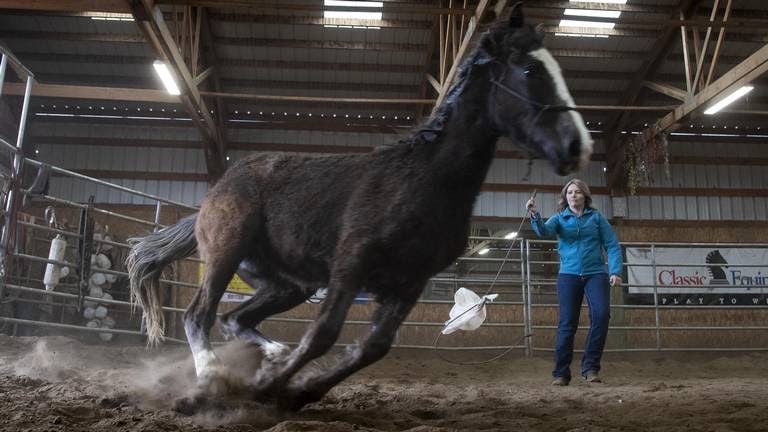 LEFT: Jamece Vincent keeps her adopted mustang Stormy on a steady run in the round pen to burn some of the mare’s energy at the start of a training session in Caldwell. BELOW: Stormy enjoys a rub on her forehead from owner Jamece near the end of the session.(Photos by Darin Oswald/Idaho Statesman) 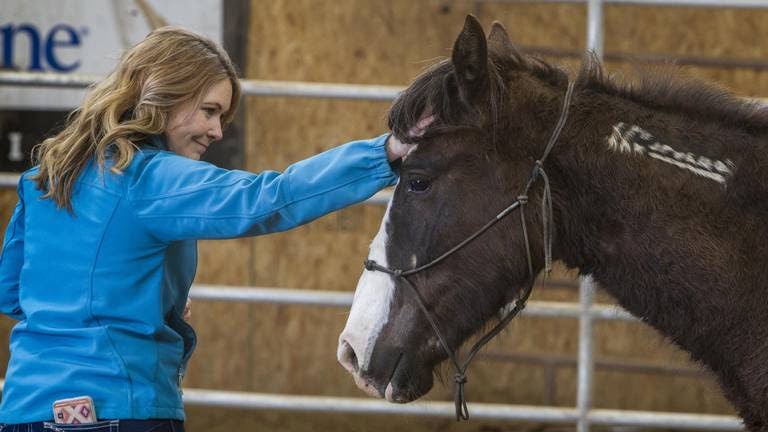 Stormy, an adopted wild mustang, enjoys a rub on her forehead from owner Jamece Vincent near the end of a round-pen training session. “It’s truly magical,” Vincent said. “On March 22 (adoption day), I couldn’t touch her at all. She was just gathered from the wild in September 2018.” (Darin Oswald / Idaho Statesman)

LEFT: Jamece Vincent keeps her adopted mustang Stormy on a steady run in the round pen to burn some of the mare’s energy at the start of a training session in Caldwell. BELOW: Stormy enjoys a rub on her forehead from owner Jamece near the end of the session.(Photos by Darin Oswald/Idaho Statesman)

Stormy, an adopted wild mustang, enjoys a rub on her forehead from owner Jamece Vincent near the end of a round-pen training session. “It’s truly magical,” Vincent said. “On March 22 (adoption day), I couldn’t touch her at all. She was just gathered from the wild in September 2018.” (Darin Oswald / Idaho Statesman)

A month ago, Stormy never had been touched by a human. By mid-April, the 2-year-old mustang was asking to have her forehead scratched, though her ears remained pricked and her eyes attuned to the slightest movement.

It’s likely that Stormy never even had seen a human before September 2018, when she was gathered from the Snowstorm Mountains in Nevada, a 100,000-acre herd management area where the Bureau of Land Management oversees between 90 and 140 wild horses. The BLM regularly captures hundreds of horses and burros from its 177 herd management areas as their populations continue to grow beyond what the land can support.

Now Stormy sees humans every day, and one in particular — Jamece Vincent, who adopted Stormy on March 22 — has taken on the difficult task of earning her trust.

Last spring, Jamece posed a joking question to her daughter, Zhatanna: How would you like to tame a wild mustang? To Jamece’s surprise, then-15-year-old Zhatanna said yes.

It was part of a project called the Mustang Mania Trainer Incentive Program, which challenges youth and adult trainers to adopt wild horses and, within the space of 100 days, teach the horse to walk on a lead, understand commands and navigate obstacles.

“I barely knew how to saddle,” she said. “So I needed a lot of guidance.”

With the help of the Zimmermans and Jamece, who grew up riding horses and doing 4-H, Zhatanna began working with her palomino mustang, Macee.

“I can tell it’s unique with me and my mustang,” Zhatanna said. “We almost depend upon each other. It’s almost like a friendship you’d create with someone else, and the more you work through together, the stronger it gets.”

Jamece could see how strong their relationship was.

“As (Zhatanna) was progressing with Macee, she developed this bond that’s hard to put into words,” Jamece said. “Macee went from never being touched by a human to almost puppy dog-like.”

Jamece wanted to experience that bond herself.

When Jamece decided to participate in the 2019 Mustang Mania challenge, she knew what she was looking for. She noticed a mare who moved smoothly and was quieter and calmer than many of the other horses.

Jamece chose her horse out of a herd of 80 and brought the mare to Matt and Stacie’s Zimmerman Horse Training facility, which meets all the requirements for adopting a mustang. She had all she needed to begin training — except for a name.

Jamece and Stacie were cleaning horse stalls when Stacie suggested taking inspiration from the Snowstorm Mountains to call the horse Stormy.

“Stormy was the name of the horse I grew up riding at my great uncle’s,” Jamece said. “It just struck a chord. It was perfect.”

The horse’s full name is Secret Agent Stormy, a nod to her vigilance and alertness.

Jamece spends hours upon hours six days a week teaching Stormy the most basic things, like how to wear a halter and walk on a lead rope.

“The real challenging part is to actually get your hands on this animal,” said Matt, who has competed in mustang training competitions since 2008.

Touch bridges the gap between a horse and handler, Matt said, and it’s a test of trust for them both.

One of the first times Jamece worked with Stormy, she turned her back to the horse and felt Stormy’s nose near her arm. Jamece hadn’t yet touched the horse, and she felt a mixture of excitement and nerves.

Now Jamece is working to teach Stormy the skills they’ll have to exhibit during Mustang Mania — leading and lunging in a round pen, loading into a trailer, having Stormy approach Jamece at the sound of a whistle, desensitizing Stormy to new things like brushing or plastic bags or gates. And, of course, scratching her forehead.

“With mustangs, there are all these little things you take for granted with a domestic horse, like just being able to touch them,” Jamece said.

There are three parts to Mustang Mania, which will be held at Nampa’s Ford Idaho Center on July 6 and 7: maneuvering, which involves handling the horse and moving in a round pen; in-hand trail, where the horse and trainer navigate obstacles; and freestyle, where the trainers use music and props of their choice to showcase their horse’s progress.

Jamece wants to do well in her own competition, but she said she’s content just to build a relationship with Stormy.

“When you have that (bond), you’re going to do well with everything else,” Jamece said.

Jamece still has to be cautious when she’s working with her horse. Even harmless objects like an unfamiliar jacket or water bottle can spook Stormy. Matt said for mustangs, learning to be around people is akin to a human being dropped into the coliseum with a predator — they believe you want to kill them. And they aren’t afraid to fight you off.

“With a mustang, you get into the wrong corner and it can turn into an MMA fight, like — boom!” Matt said.

But that doesn’t mean they’re untameable.

“The myth about mustangs is that they’re really wild,” Matt said. “And they are kind of wild, but once you can gain their trust, they’re just like any other horse and you can achieve anything that you ever dreamed of with a mustang.”

The Zimmermans have trained hundreds of mustangs over the years. Matt advocates for training techniques that are calm and kind, like the program Jamece is working on with Stormy.

“There have been so many changes in horse training, even since I was a kid,” said Jamece.

Even the language around horse training has changed. Instead of “breaking” a horse, trainers focus on “gentling,” gaining the horse’s trust rather than trying to temper its spirit.

“When you see that transformation from wild to mild, it completely changes your view on mustangs in general,” Jamece said.

Ultimately, the goal of the Mustang Mania program is to find permanent homes for those mild-mannered horses — though Matt said many of the participants end up choosing to keep the animals they train.

Zhatanna adopted Macee and plans to ride her when the 2-year-old horse is older. She said she wouldn’t trade Macee for the world.

For Jamece, it’s too early to tell if Stormy is meant to become a part of their family. With all the strides the pair have made in four short weeks, who knows how close they’ll be in 10 more?