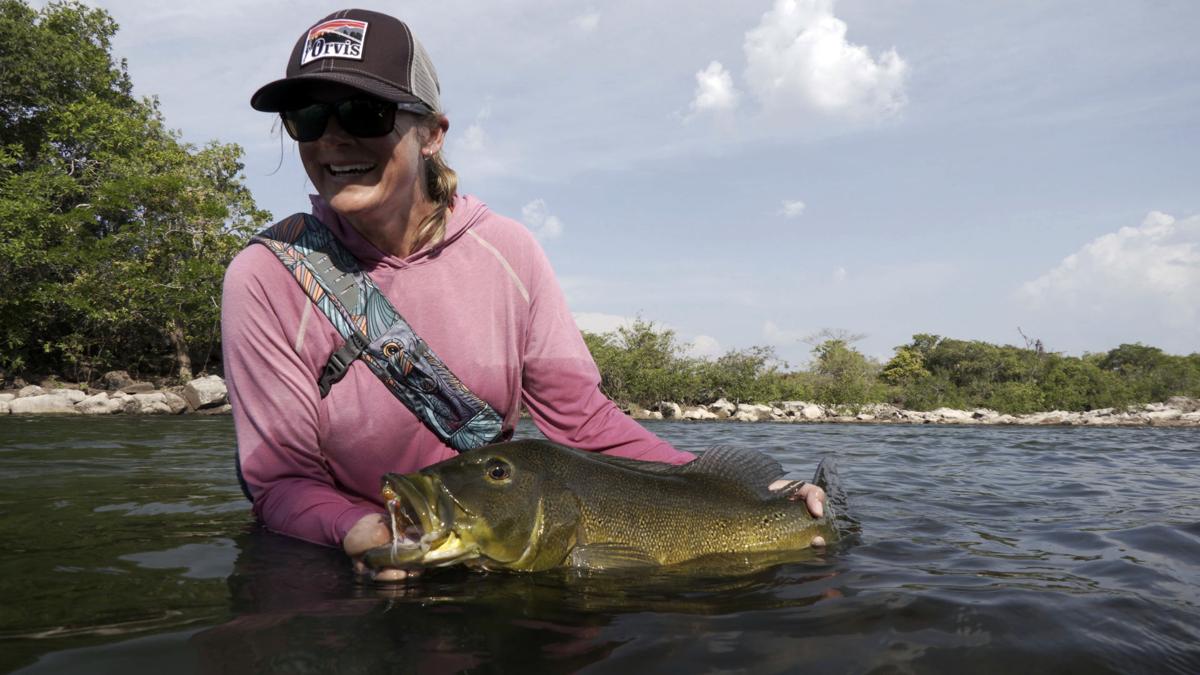 Kelley Moen, of Sisters, shows off a peacock bass she caught while fly-fishing on the Iriri River in the Amazon jungle of Brazil.(Todd Moen/submitted photo) 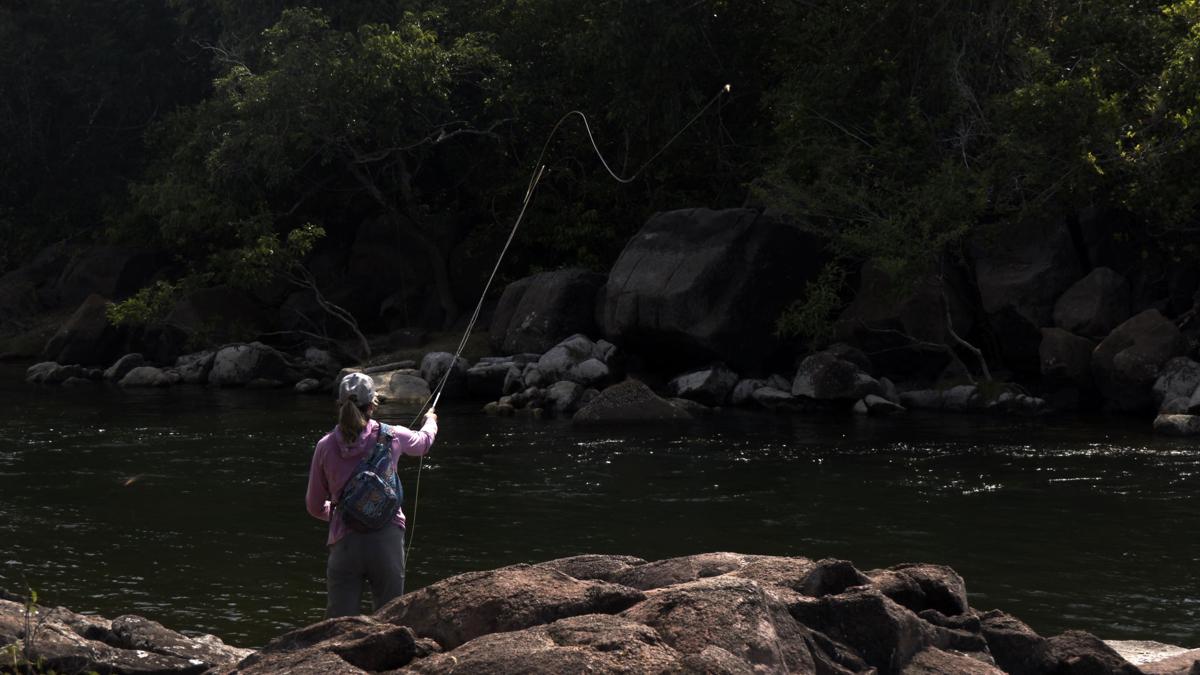 Kelley Moen, of Sisters, fly fishes on the Iriri River in the southern Amazon Basin in Brazil.(Todd Moen/submitted photo) 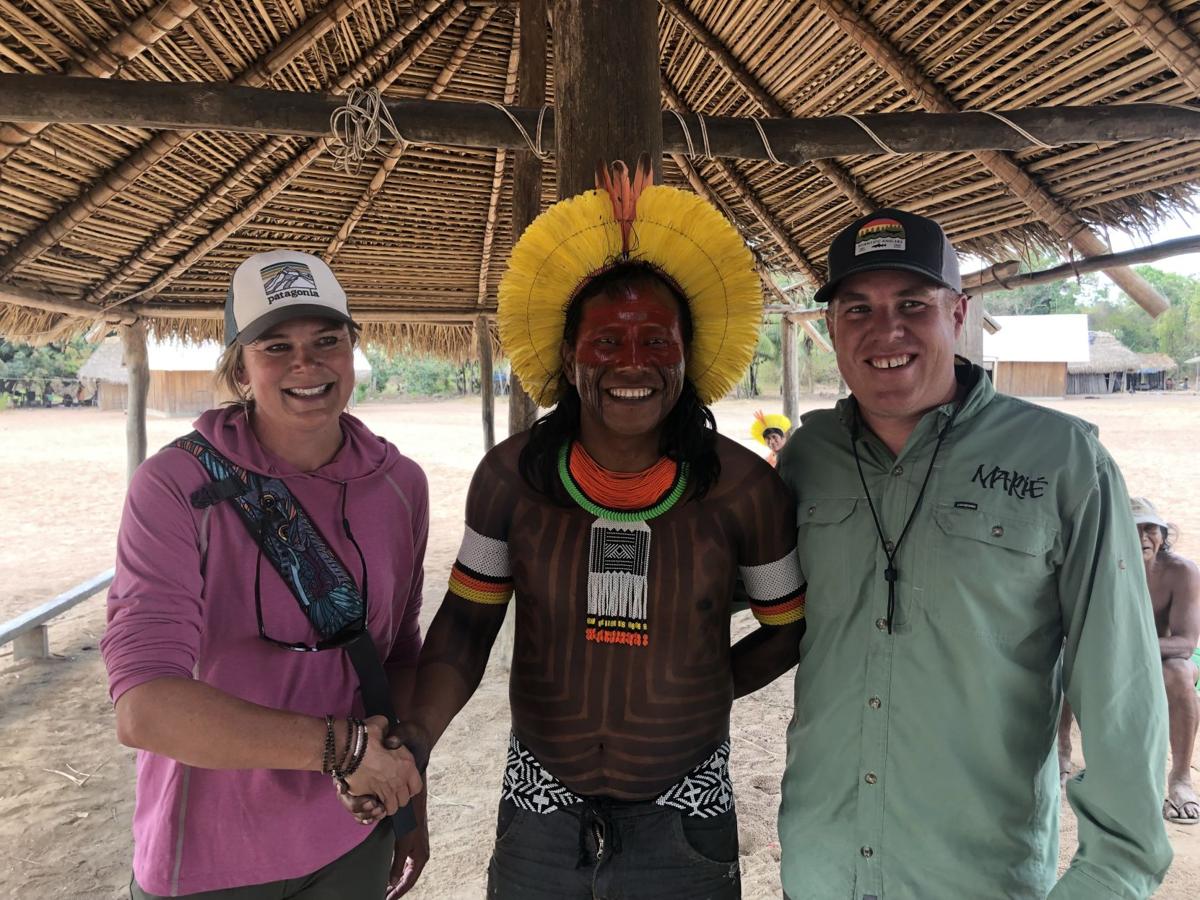 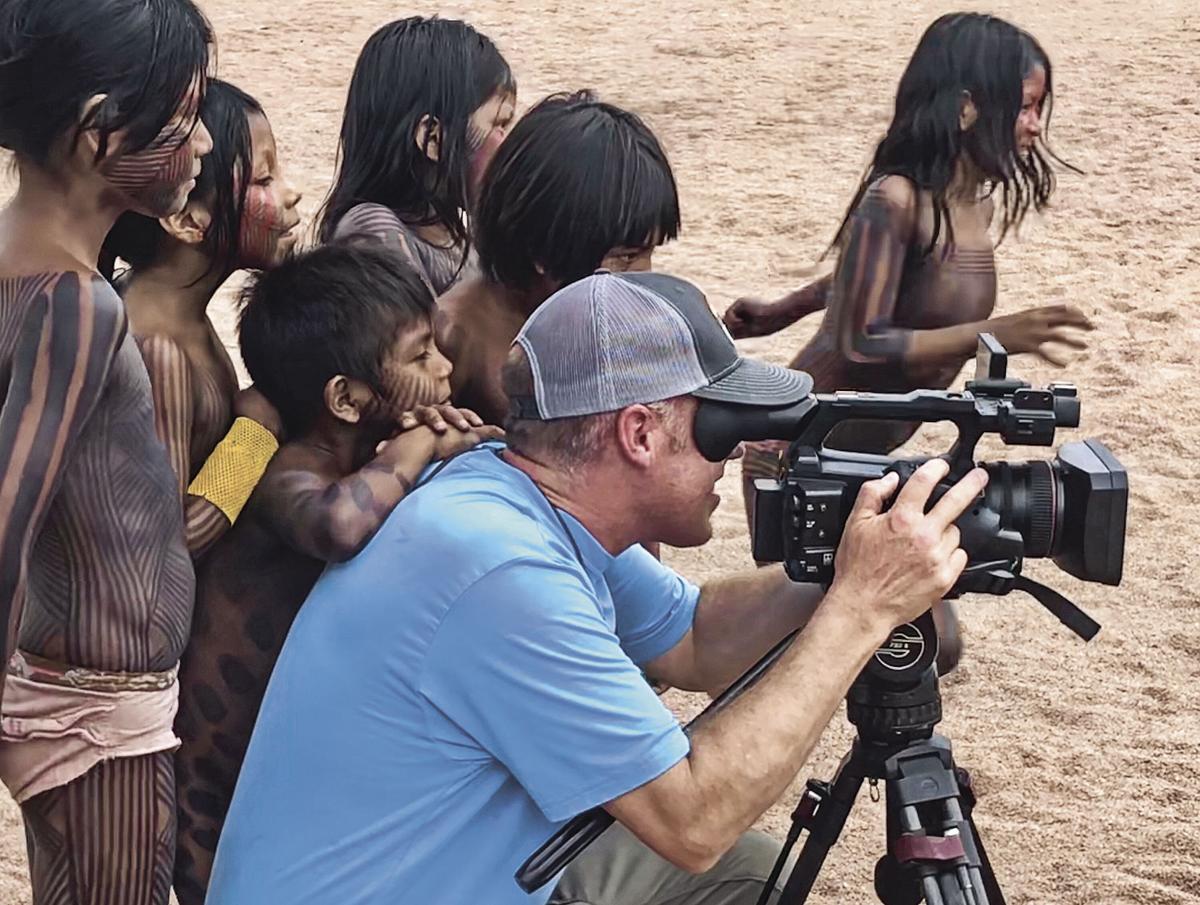 Kelley Moen, of Sisters, shows off a peacock bass she caught while fly-fishing on the Iriri River in the Amazon jungle of Brazil.(Todd Moen/submitted photo)

Kelley Moen, of Sisters, fly fishes on the Iriri River in the southern Amazon Basin in Brazil.(Todd Moen/submitted photo)

Todd and Kelley Moen recently made a fly-fishing trip of a lifetime deep into to the Amazon rainforest in Brazil.

But the trip offered so much more than just fly-fishing for the husband and wife from Sisters.

It also provided a chance to learn the culture of the Kayapo indigenous group in the southern Amazon Basin.

The isolated group rarely sees white women, according to Todd Moen, so the Kayapo children flocked to Kelley when the Moens arrived in the Kendjam village on the banks of the Iriri River in the Xingu Basin.

“When we first got there, she was just surrounded,” Todd says. “It was really cool.”

“For a woman to go to the Amazon and be in the jungle, it’s different than what you would expect,” Kelley says. “I got to really see this culture and hang out with the women and the families.”

As the owner of the online Catch Magazine that features fly-fishing photos and videos, Todd Moen travels the world to find some of the best fly-fishing destinations. He figured this trip in late August offered an opportunity to bring his wife along to serve as the angler while he shot the video. (Their 11-year-old son and 9-year-old daughter remained in Central Oregon with Todd’s parents.)

Todd was behind the camera most of the time, filming Kelley casting and hooking into some of the most exotic fish species in the world that call the Amazon Basin home, including peacock bass, wolf fish, matrinxa, bicuda, pacu borracha and black piranha. Todd plans to include video of the trip in the December issue of Catch Magazine (catchmagazine.net).

Todd describes the Iriri River as a freestone stream with crystal-clear water. Whereas many of the Amazon River’s tributaries have tea-colored water, on the Iriri, he could see to the bottom even when it was 10 feet deep.

“The water was between 80 and 90 degrees, and the fish … it’s a fisherman’s dream,” Todd says. “A lot of top-water poppers. Probably the most fun were the peacock bass, and the matrinxa. There’s tons of species of fish there, it’s crazy … plus the bird life is amazing, and the snakes are huge.”

The Moens, both 43, also enjoyed seeing two rarities — even in the Amazon: a black panther and a spotted jaguar. In a boat with two native guides, Kelley spotted the black panther first.

“Five minutes later we could hear some twigs breaking, and out of the jungle, here comes a different jaguar, a classic spotted one,” Todd recalls. “It was a female and much smaller. So we saw two panthers back to back — it was incredible.”

The Kayapo Nation consists of 45 tribes that call the Xingu Basin home, according to untamedangling.com. The protected territory includes more than 24 million acres of land in one of the most unspoiled areas in the southern Amazon Basin. But agriculture, mining and logging over the last 30 years threatened the tribes’ way of life. Thousands were forced from their lands or killed in conflicts, according to the website.

The owners of Untamed Angling wanted to provide a recreational catch-and-release fly-fishing opportunity for adventurous anglers on the Iriri, but also combine it with “the provisions of economic benefit and environmental protection and sustainability to the indigenous people,” according to the company’s website.

The first season was in 2015. From the Kayapo’s view, the Untamed Angling program was a chance to bring awareness for the protection of their culture, river and environment, while also offering an activity for their young warriors.

“There’s a lot of young kids in this tribe,” Todd Moen says. “I think a lot of them want to leave, and they want to go to the big cities. Brazil has some of the biggest cities in the world. They’re bringing in anglers to show these younger kids that they have something special. These anglers are coming from all over the world to go into this deep jungle territory, where you have to fly four hours in a little tiny five-seater Cessna plane to get there and land on a little dirt landing strip.”

Kelley Moen calls it a unique cooperation between the fly-fishing company and the Kayapo.

“They’re being encouraged to keep their culture and dress in their traditional dress and protect their land,” Kelley says. “They’re using the land, and they’re keeping their young people on the land rather than leaving.”

During the trip, while Kelley fished and Todd filmed, their native Kayapo boat guides would search for turtle eggs or spear the black-and-white spotted freshwater stingrays that live in the river.

The Moens did their best to avoid the stingrays, which can be deadly. Todd says the Kayapo use the poison from the stingrays as a hunting tool.

“They’ll be spearing the stingrays, and what they do is pull the stinger off the tail, which is full of poison, and they use that poison for their arrows when they go hunting,” Todd explains.

The Moens relied on the Kayapo guides to navigate them along the Iriri River and throughout the Xingu Basin via boat. The trip was during the dry season, and the river was dropping 1 to 2 inches per day, according to Kelley, which could have made for difficult navigation.

“Their expertise is navigating water,” she says of the Kayapo. “We’re relying on them. This is their backyard.”

While river navigation is a significant part of the Kayapo culture, so is body painting, as the Moens learned. Tribal members wear body paint to signify certain rituals or activities. The paint is made from mixed fruits and charcoal, and it does not wash off for about two weeks, Todd says.

“They don’t wear much clothing because it’s so hot,” Kelley says. “Painting is their way of expressing an event. The women do it (the painting). It’s a very specialized role. I gave one of the women a dress I brought and she gave me a tattoo of body paint on my arm in exchange.”

Yes, the fly-fishing was fine deep in the Amazon. But for Todd and Kelley Moen, the thrill of discovering a culture was more profound than the thrill of a tug on the line.