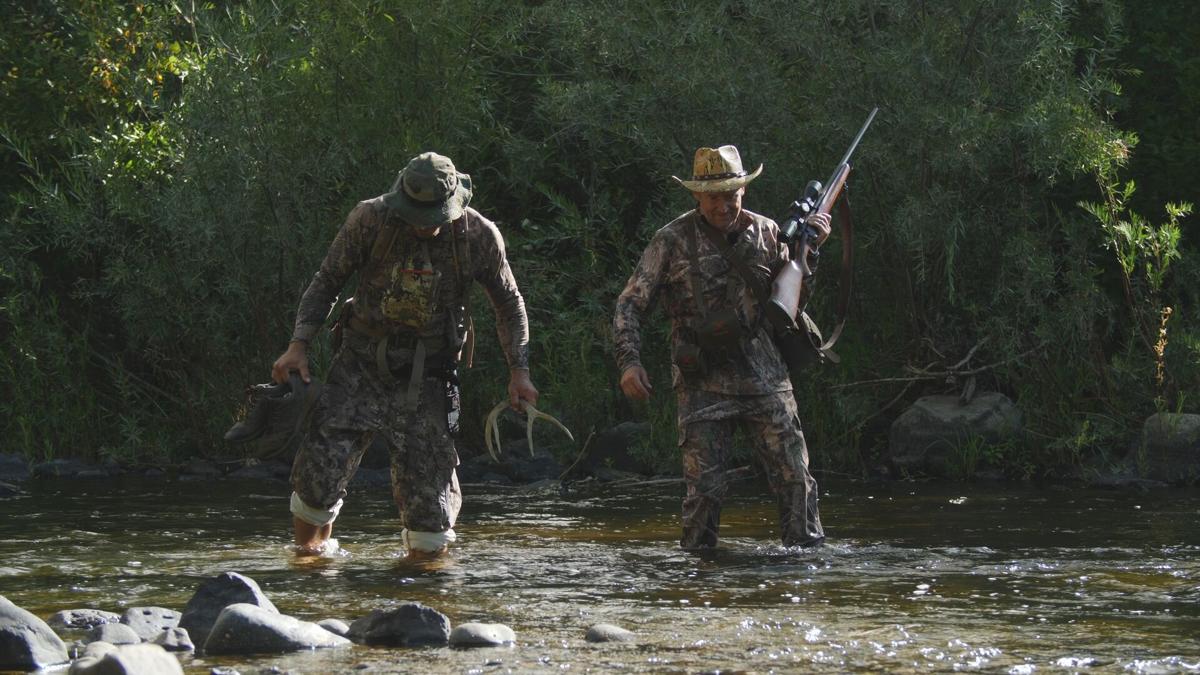 Back down to the creek after an "easy" morning hunt. The hunt was drawing to a close with no bears sighted. 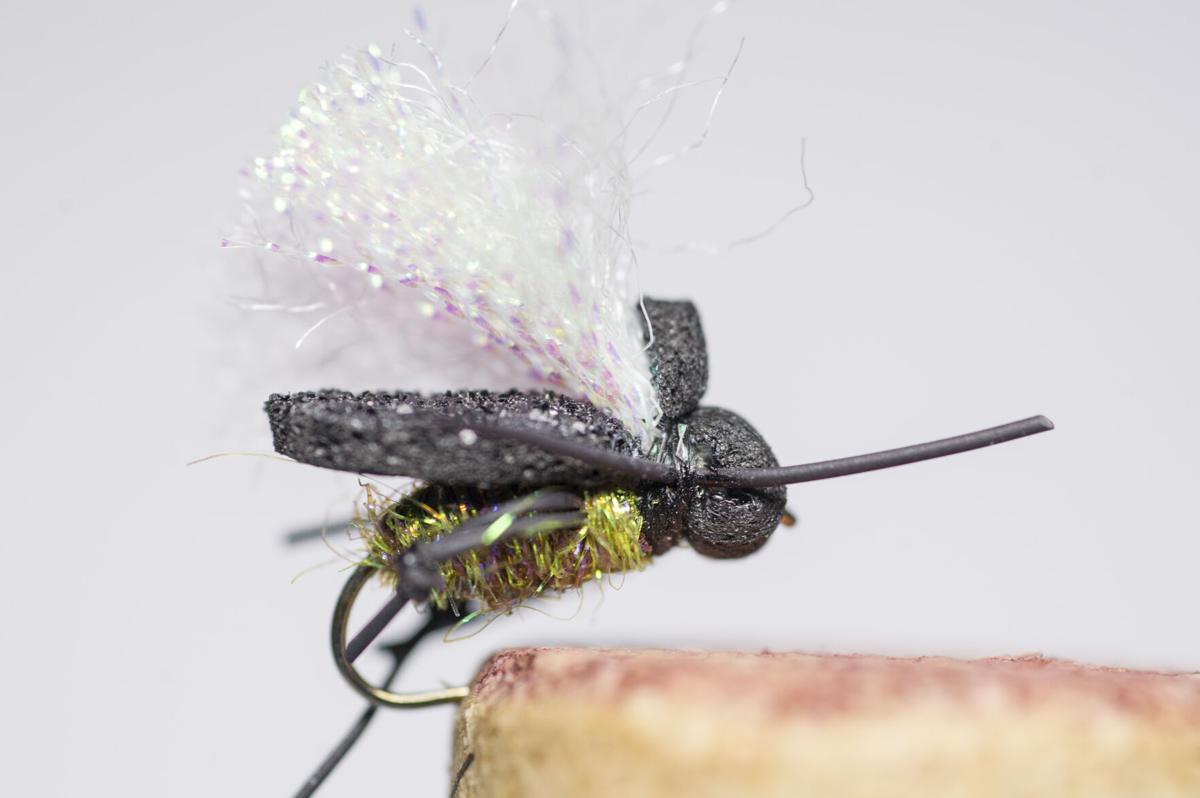 Back down to the creek after an "easy" morning hunt. The hunt was drawing to a close with no bears sighted.

One thing we knew was the bear would be in the berry patches. Figuring out which berries was the hard part.

This hunt was supposed to be easy. Indian plums, Italian plums, hawthorn berry, huckleberry, blackberry and chokecherry would be in season. Late August, we thought, was a great time to find bears where fruit is plentiful. After 2½ days we had not seen a bear.

The turning point came in a berry patch, but it didn’t happen like you’d think.

With half a day left in the hunt we stopped to pick huckleberries on a forest slope, filling whatever containers we could find with the fresh fruit. It gave me an idea. I would make pemmican when I got home.

Pemmican was the original superfood, a blend of dried meat, dried berries and bear fat (substitute bison fat, beef tallow, or coconut oil). I always wondered what pemmican tasted like. This was my chance. And later I blended dried meat and dried huckleberries to powder. Rendering oil on the stove, I poured it over the powdered jerky/berry blend. The final step was to press the mixture into a serving dish and refrigerate overnight. Then, break off a chunk, let it disintegrate on the tongue. It’s the ultimate carnivore protein bar. But I’m getting ahead of myself.

Those moments in the berry patch up near the Cornucopia Mine, picking berries with my friends Sam Pyke and Lucas Simpson (guiding for Pine Creek Outfitters), we felt our attitudes change, the pressure bleed away. Wild berry picking will do that for you.

Our afternoon hunt, Lucas said, would be easy. But he wasn’t looking me in the eyes when he said that. Twenty-five miles to drive then four hours to climb the mountain.

Out in the August afternoon sun, the temperature hovered in the mid-80s.

Up onto a hog back we climbed, saving our strength, going slow, one foot in front of another. Hundreds of yards up the rising plateau we stopped. Sweating, we folded our mountain-burned legs in the shade of a grove of trees.

It was here, I thought, this hunt would end. We had not seen a bear. We probably would not see a bear. But we made the effort.

Shadows lengthened. This is how it happens, I reminded myself. Sit in one good place. Let the animals move. Let them show.

There comes a moment in days like this when the animals have to move. A time for water. Hunt till dark, I told myself. Stay at it. Believe in the process.

A bear appeared on a goat trail, way up the mountain. It strolled a narrow ledge like it was a sidewalk. Black, almost silver-black against the granite cliffs, its coat glistened in the afternoon light. It turned and showed a white patch on its chest. When it reached the shoulder of the ridge, it angled into a stand of hawthorn berries and fed through it and out into the open again.

“It is going to come right to us,” Simpson dared to say aloud. But the bear did not. Instead, it emerged into a swale, 600 yards away then vanished into a brush line. Thirsty, no doubt. It could find water there. We scrambled to cut the distance, down into a canyon and up the other side and through another swale and up through hawthorns.

We had found the bears. The bears were in the hawthorns and it did not matter that apples, plums and seven other kinds of berries were on the bushes. The bears wanted hawthorn berries. And here were hawthorns. And piles of scat on every trail.

Simpson plunged down the shoulder of the hill, vanishing in the dark of the hole, into the shadows that had swept across the land. Fifteen minutes of light left.

The vantage could not have been better. I dropped into a sitting position and put elbows against knees. The rangefinder said 162 yards to the edge of the brush across the canyon. Somewhere down below Simpson fought through the canyon.

A dark chocolate shape materialized on the brush line and then the bear stood up on its back legs. Not the black one I had seen earlier, a different bear. Watching its back trail, it seemed to be looking for Simpson in the canyon below. How many other bears were in there?

Under my thumb, the safety clicked through to “fire.” Finger on the trigger, three pounds of squeeze, the punch of the rifle on my shoulder. We would find the bear in the creek bottom.

Once the Umatilla, Cayuse, Nez Perce and Walla Walla called this their hunting ground. They picked berries here too and turned the meat into jerky and rendered bear fat for pemmican. There was a time when bighorn sheep were numerous as deer in these canyons and on these mountains. More recently, there was a time when deer were too many to count. Today there is a small elk herd, precious few mule deer and bears, maybe too many bears.

Bring a bucket for the berries.

Continuing our theme of big, dark substantial surface chewies, let's not forget the beetle. Trout in high desert lakes and ponds, and panfish in warmwater lakes love beetles. These easy targets often show up on the edges of still waters where bigger fish cruise early and late in the day.

With knee-knotted rubber legs, a stout carapace, buggy green body and a bit of flash, AJ's Beetle will take a beating and give back as good as it gets.

Buy one for an example at the tying desk. Build this beetle on a No. 10-14 dry-fly hook. Start with UV insect green dubbing for the body. Trim a piece of foam to form the elytra (hindwings) and pronotum (thorax plate) then wrap it with a hole for the eye of the hook. Tie in a white poly/Krystal Flash wing then tie down the foam forewing. The extra fine black rubber legs are the final exquisite touch. Front legs should extend fore and aft in an X pattern. The rear legs should be crafted from the same material. Use two fibers per side and knot at the knee. Trim one fiber short and leave the other long.