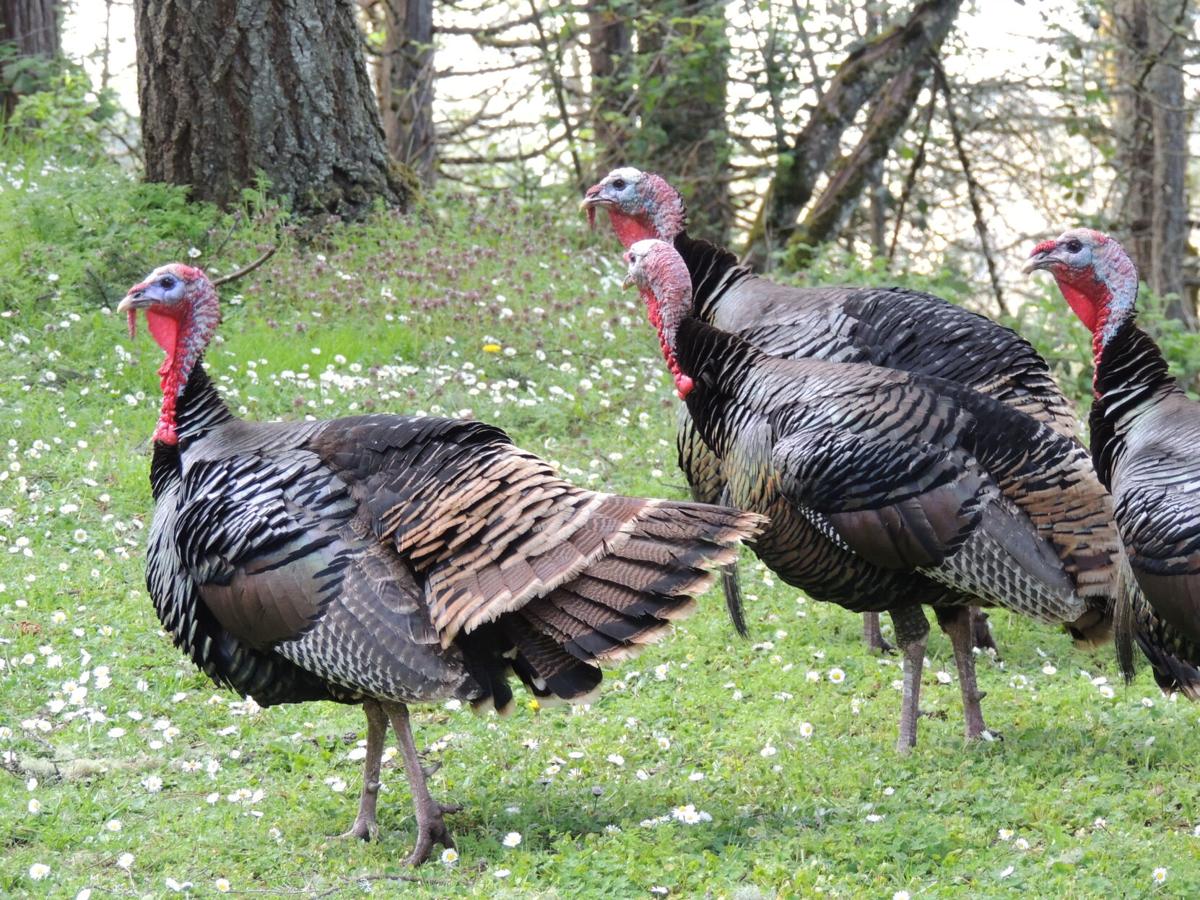 Four boss gobblers in the wildflowers on a ridge top near Eugene. 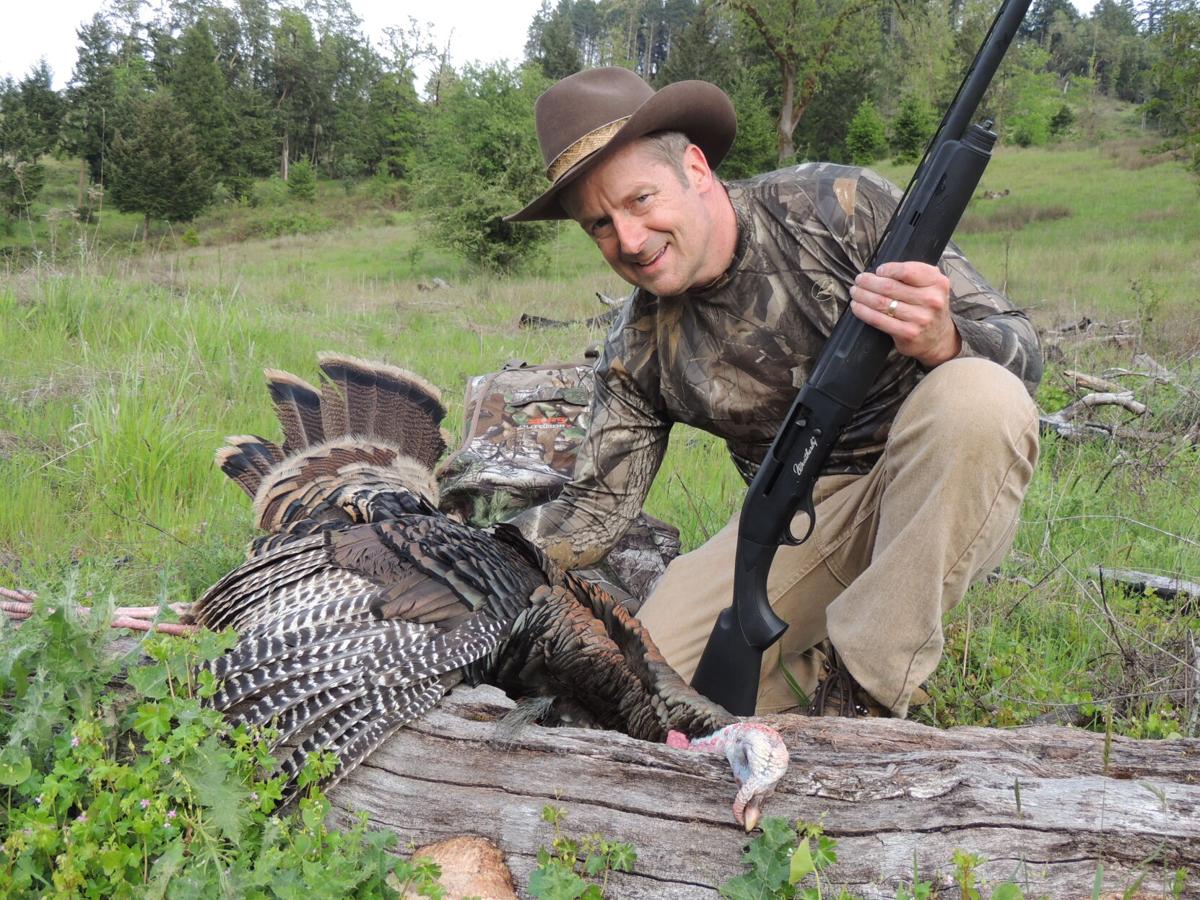 On a solo hunt in the Melrose Unit, the author surprised this 15-pound gobbler traveling with three jakes and a hen. 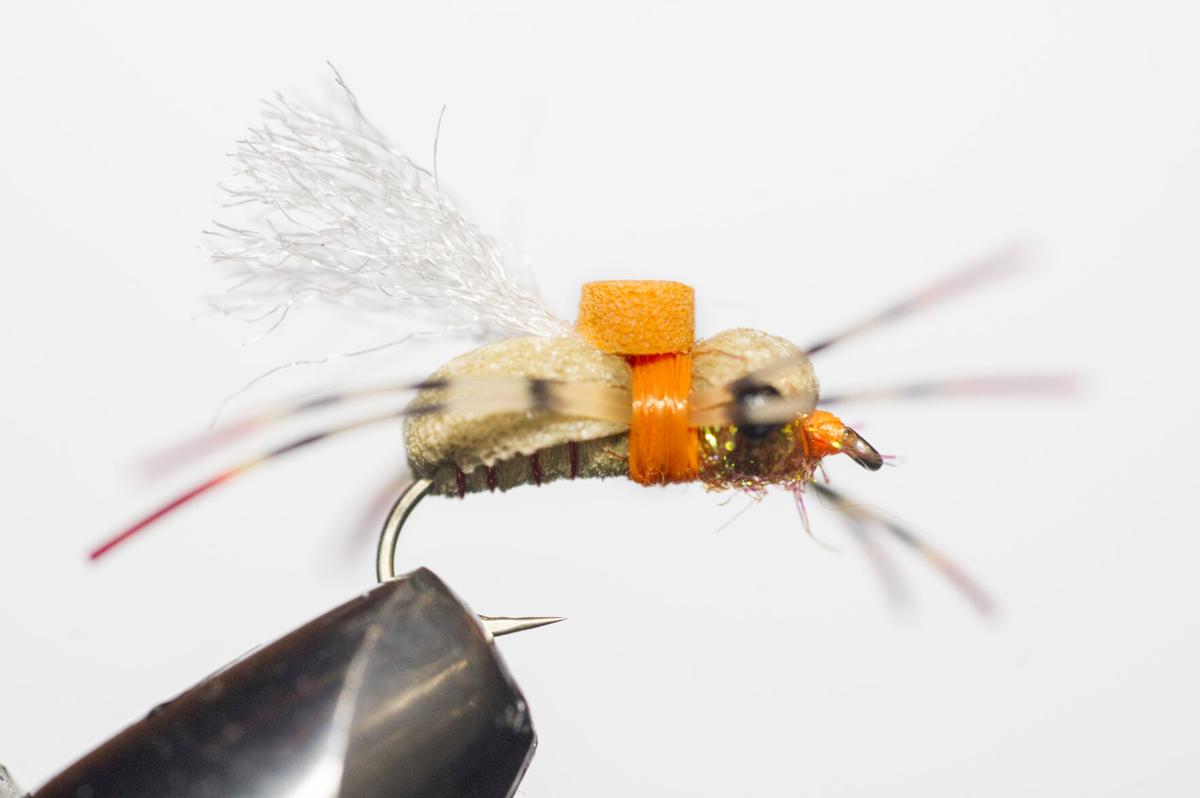 Four boss gobblers in the wildflowers on a ridge top near Eugene.

On a solo hunt in the Melrose Unit, the author surprised this 15-pound gobbler traveling with three jakes and a hen.

I knew better than to get up and move. I’d only been in place at the base of the oak tree for 30 minutes. But I moved.

A turkey had gobbled back to me and then gone silent. I suspected a hen had caught its attention.

I gathered up the decoys.

If the gobblers didn’t want to come down the hill then they might work out into the meadow to the west.

I decided to try to get there ahead of them. Halfway through my move, I saw the birds where I least expected them.

Instead of down in the creek bottom, the turkeys were on the slope above the old stagecoach road, now spread out in a ragged line, headed right toward me.

Four gobblers and a hen. On the move. Four shiny ones and a buff-colored female. Three were jakes while the one at the back had a longer beard.

Below the turkeys on the hill, there was only tall grass to hide me, but it was enough. Now the last jake cleared the bigger tom. With the gun at my shoulder, I had to raise up out of the cover to make the shot.

The boss bird wind-milled in the sun-cured grass and its posse went up the hill and disappeared into the fringe of oaks.

I ran up the hill to claim my prize, a 15-pound gobbler with a beard that measured almost 6 inches long.

These are the good old days of turkey hunting. I’ve been saying that for a few years now, and each year’s harvest seems to outpace the season before.

The 2020 season was a standout for social-distancing turkey hunters.

Going by the numbers, Oregon’s best turkey habitat is in the southwest corner of the state in the Melrose, Rogue, Applegate and Evans Creek units.

According to the harvest information from the 2020 spring season, the Rogue Unit produced 518 turkeys for 1,249 hunters with a success rate of .41 birds per hunter. The next most productive unit was the Melrose with a harvest of 443 birds and .62 birds per hunter.

Central Oregon’s White River Unit comes in fourth place. In the 2020 season, 1,722 shotgunners and archers hunted the White River and tagged 391 toms. With 43% public lands, the White River Unit has ample room for a hunter to ply a call. Other dry-side best bets include the Ukiah, Murderer’s Creek, Wenaha, Mt. Emily and Sled Springs units.

There has never been a better time to become a turkey hunter in Oregon. Since the first introductions in the 1960s, turkeys have filled in prime habitat in every county.

It isn’t difficult for a tenderfoot to get started.

Somewhere about 40 yards, the pattern will open up. The load ceases to be effective when there are less than six pellets in a turkey’s neck and head.

Calling is easy to learn. There are several types of calls: the pushbutton, the slate, the box and the mouth call, easy to master with a little practice.

Plan to wear camouflage from head to toe and all the way out to the fingertips. A facemask and gloves complete the costume.

Much of what the tenderfoot turkey hunter needs to know has been covered in an online course. Click on https://myodfw.com/learn/collection/how-to-hunt-wild-turkey-in-oregon/skill/turkey-hunting-in-oregon.

Oregon’s turkey hunt runs through the end of May. The daily bag limit is one male or bearded turkey. Hunters are allowed three for the season.

With a liberal limit and birds in every county, there is a lot of opportunity for a new turkey hunter to bag one for dinner.

Over the last three years, I have chased the Utah and Wyoming Cutthroat Slams with a group of friends, collecting all the subspecies of cutthroat trout on a fly rod. One of our go-to moves is to fish dry and dropper. In the absence of a hatch, a beetle pattern is a good attractor that will turn a trout's head.

J's Regal Beetle (available in black and tan) is a terrestrial pattern that works great in trout streams and panfish ponds. The body is sculpted from Evazote foam, segmented with wire, an orange hot spot and Ice Dub on the belly. The orange parachute post makes it easy to keep track of in the current. Rubber legs and eyes add realism.

In fast water, it is a good choice when the fish have been jaded by other patterns and have quit biting. When fishing still water, let the Regal Beetle sit for awhile with an occasional short strip every 45 seconds to activate those shaky legs.