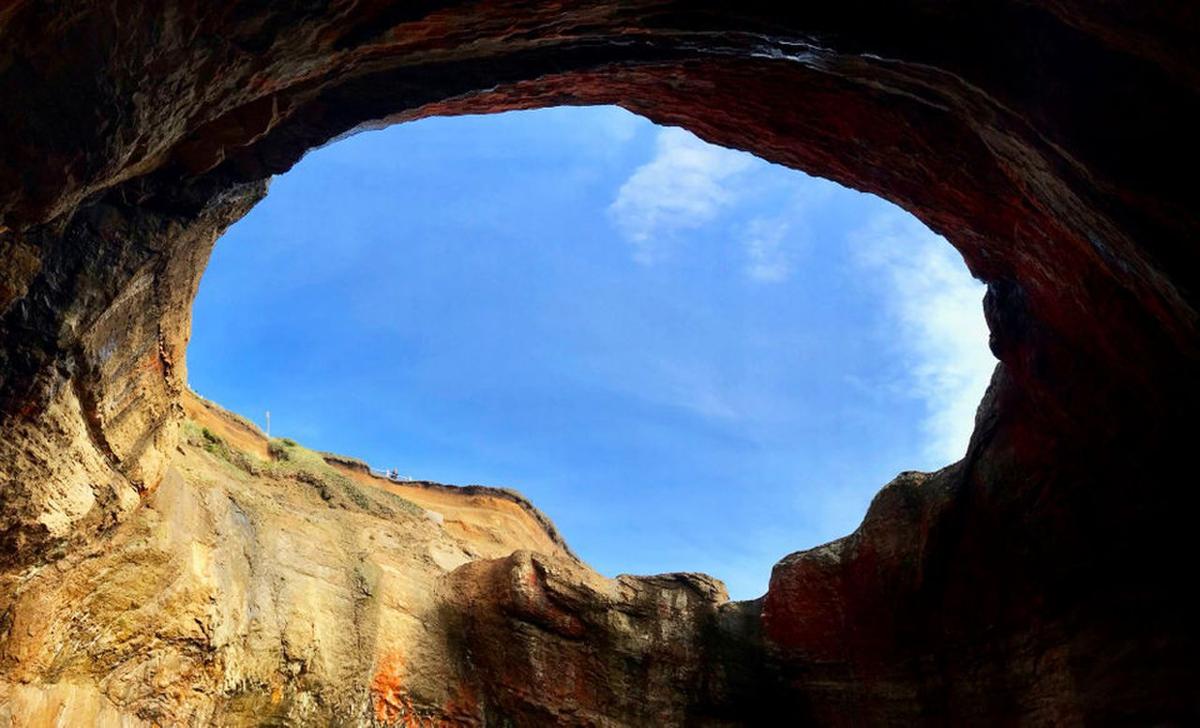 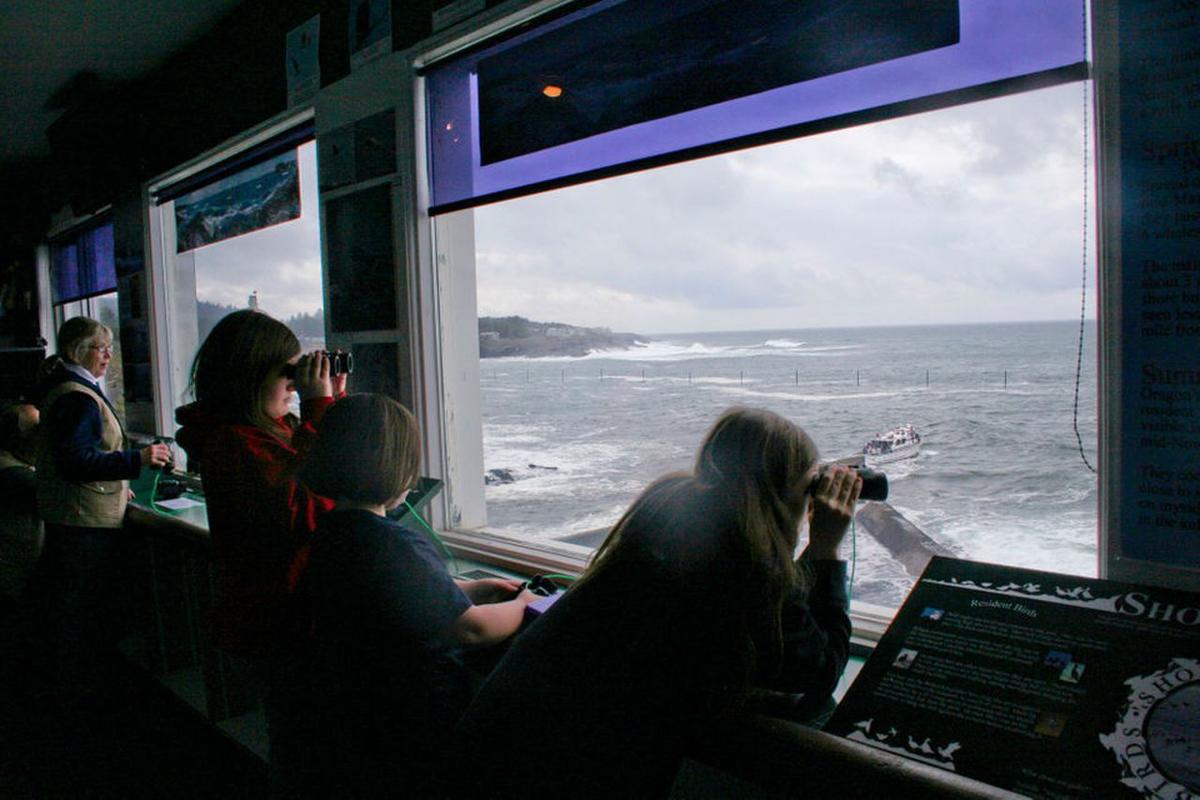 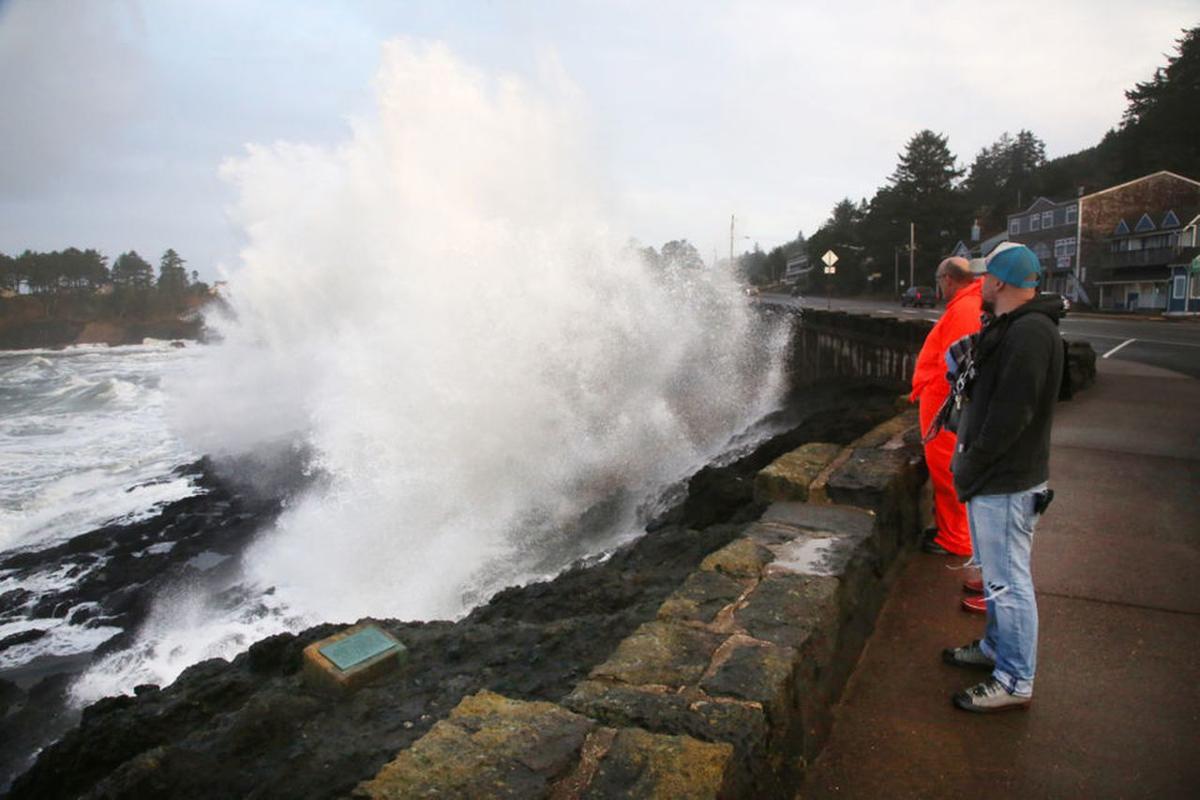 The first thing to look for is the spout, a faint jet of mist at the surface of the ocean. Keep watching and you might see a fluke – the tip of a whale’s tail that comes out of the water as it dives deeper into the ocean.

This spring means the return of migrating gray whales on the Oregon coast, and there’s no better place to see them than Depoe Bay, a town that advertises itself as “the whale watching capital of Oregon.”

Gray whales can be seen for most of the year in Depoe Bay, thanks to a resident population that feeds in the kelp beds just offshore. They’re a big draw for visitors, but so are the many local restaurants, attractions and oceanside vistas around town.

Depoe Bay balances the barnacle-crusted coastal reality with the neater tourist lifestyle better than most towns on the Oregon coast. Here, a creaky old restaurant serves up classic clam chowder only two blocks from a bright, modern cafe serving locally roasted pour-over coffee. You can dine at a restaurant on the edge of the ocean, or hang out with locals eating fried fish at the pub.

Beachgoers may be disappointed to see the dark, rocky shoreline that surrounds the small town, but just down the road are sandy beaches — not to mention a collapsed sea cave, tidepools and several sweeping viewpoints — offering starkly different ways to enjoy a day at the beach.

There’s a lot to love about Depoe Bay, but the love of gray whales is what truly makes it a special destination on the Oregon coast.

The spring gray whale migration for 2020 is expected to occur March 21-29. You can see them from most good vantage points on the coast, or you can stop by one of the 24 state park sites designated for Whale Watch Week, where volunteers will be on hand to help you spot them.

Boiler Bay: Boiler Bay is a popular spot for bird watchers, whale watchers, storm watchers and anyone who wants to get a look at a small, scenic vista near town. It’s named for an old shipwrecked boiler that you can still visit when the tide is extremely low.

Fogarty Creek: The closest stretch of sandy beach to Depoe Bay is Fogarty Creek, a small state park site just north of town that can get busy on a sunny day. Two parking areas offer access to Fogarty Creek, both taking you to the same beach, where waves crash against a big rock in the surf and colorful stones line the bottom of a trickling creek.

Devils Punchbowl: Devils Punchbowl is a great destination in all seasons. Stop by when it’s stormy to see some spectacular crashing waves from a viewpoint above. Go when the tide is extremely low and you can head down to the beach and walk inside the collapsed sea cave, getting a view like no other on the Oregon coast.

Otter Crest Beach: On the north side of Devils Punchbowl, Otter Crest Beach is a spectacular destination in its own right. Small caves can be found in the sandstone cliffs, with an ocean view dominated by Gull Rock in the distance. Atop the cliffs is the Inn at Otter Crest, home to hotel rooms, condos, a restaurant and a bar.

Rocky Creek: Found just south of Depoe Bay, Rocky Creek is a beautiful state park site with no shortage of views. Cross the grassy hill for a look at the ocean from a black basalt shoreline, then hike north to find a small viewpoint tucked into a cove, followed by a viewing platform at the edge of Whale Cove.

Cape Foulweather: Offering a spectacular vista of the Pacific, Cape Foulweather is a good spot to watch for migrating gray whales, or to sit and relax as waves roll into shore. The cape is also known as Otter Crest State Scenic Viewpoint, not to be confused with the nearby beach.

Gleneden Beach: Gleneden Beach is found just north of Depoe Bay, where the rocky shoreline gives way to the sandy Salishan Spit. It’s a perfectly beautiful beach with plenty of room to find your own private slice of coastal paradise. The developed state park site is the primary public beach access point for what is otherwise a residential area.

Whale watching tours: Whether it’s migration season or not, there’s a good chance you’ll be able to see a whale in Depoe Bay, courtesy of three whale watching tours that operate in town. Whale Research EcoExcursions offers educational tours in smaller Zodiac boats, Tradewinds Charters runs bigger tours on bigger boats, and Whale’s Tail Charters runs small charter trips to see whales and other wildlife. Whale watching tours are seasonal and weather dependent. Prices run from $20 to $45 a person, depending on the company and length of tour.

Whale Watching Center: Run by Oregon State Parks, the Whale Watching Center is always a good place to learn about whales off the Oregon Coast, though it’s especially popular during the spring migration season. Designed for tourists of all ages, the building bustles with curiosity and the thrill of discovery when a whale spout is spotted just offshore.

Spouting horns: Not to be confused with the spouts of gray whales, spouting horns are vertical sprays of ocean water, created as waves crash into narrow openings in the rocky shoreline. The best spouting horn is found in downtown Depoe Bay, where water is known to spray clear across the highway during storms.

Depoe Bay Harbor: Billed as “the world’s smallest navigable harbor,” the harbor at Depoe Bay sits at the center of the small town, visible above from the Depoe Bay Bridge or by boat aboard a whale watching or fishing charter. If you get lucky, you can watch a boat navigate the narrow bay entrance.

Whale, Sealife and Shark Museum: Whether you book a whale watching tour with Whale Research EcoExcursions or not, you can stop by their Whale, Sealife and Shark Museum, a labor of love from marine biologist, boat captain and business owner Carrie Newell. The museum houses hundreds of marine artifacts, including bones, birds and shells. Educational exhibits teach all about the marine life of the Oregon Coast.

The Horn: The Horn Public House and Brewery opened in 2016, taking over the old Spouting Horn building in downtown Depoe Bay. The Horn serves up great chowder, fish and chips, and other pub fare, alongside beer brewed by the in-house Depoe Bay Brewing Company. Its spacious upstairs dining room boasts ocean views, a bar and a game room.

Pirate Coffee Company: A more traditional coastal coffee shop, Pirate Coffee Company is a classic local haunt that’s full of whimsy. Pirate decorations greet you at every turn, with a menu full of themed specialty drinks like Blackbeard’s Ghost and The Scallywag. The establishment is also serious about coffee, roasting its beans in-house. It’s a good spot to hunker down during a storm.

Beachcrest Brewing: One of the newest breweries on the Oregon coast, Beachcrest Brewing holds down a spot at the Salishan shopping center in Gleneden Beach, serving up a wide variety of interesting brews. It’s run by owners Amy and Matt White, former jazz musicians who brought their love of creative experimentation to beer. Instead of setting up yet another brewpub, they decided to establish a community gathering spot that hosts events year-round.