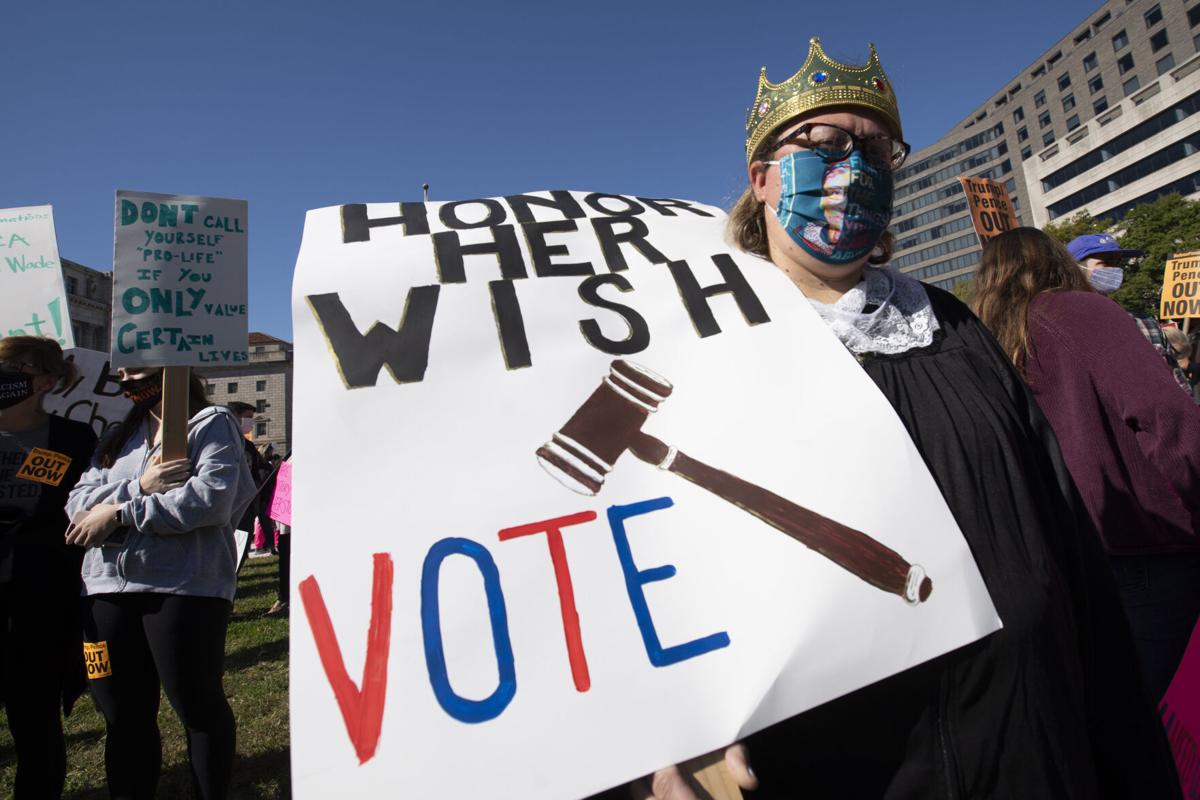 People rally during the Women’s March at Freedom Plaza on Saturday in Washington, D.C. This woman is dressed like the late Supreme Court justice Ruth Bader Ginsburg. 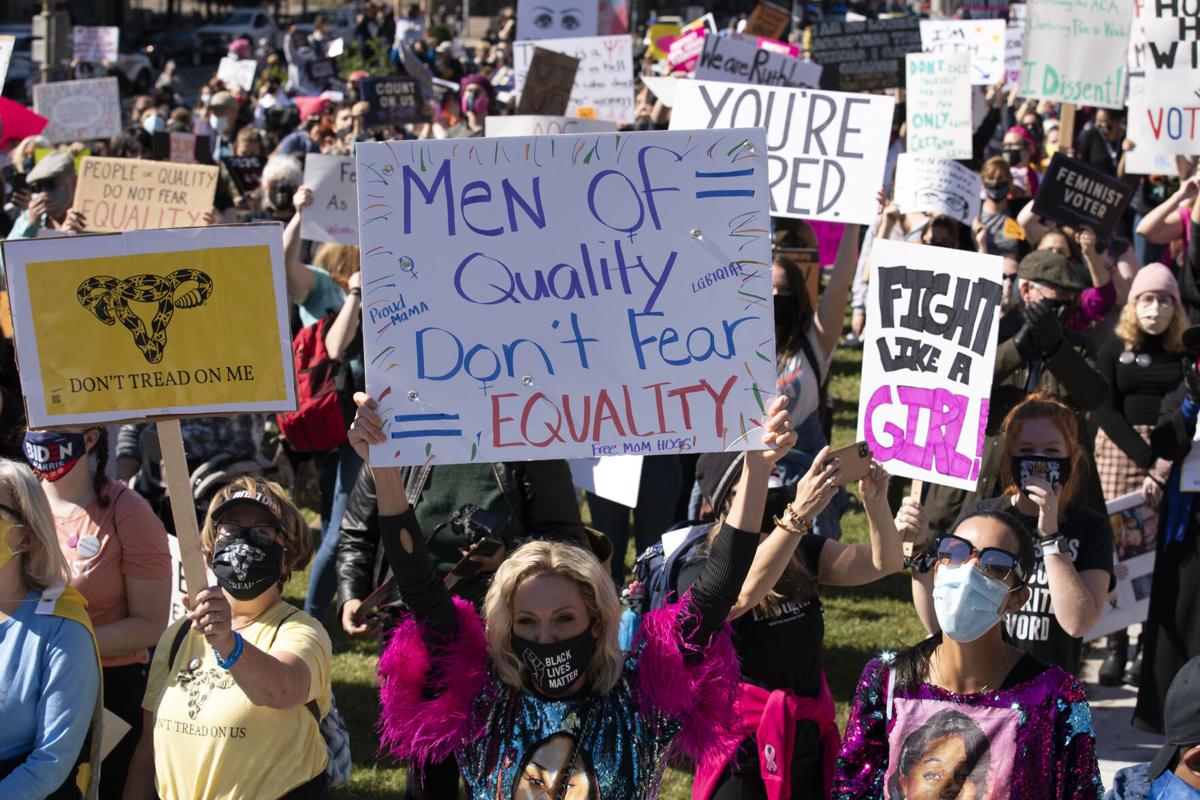 Protesters rally during the Women's March at Freedom Plaza, Saturday, Oct. 17, 2020, in Washington.

People rally during the Women’s March at Freedom Plaza on Saturday in Washington, D.C. This woman is dressed like the late Supreme Court justice Ruth Bader Ginsburg.

Protesters rally during the Women's March at Freedom Plaza, Saturday, Oct. 17, 2020, in Washington.

WASHINGTON — Wearing costumes and carrying signs, thousands of people gathered for the Women’s March in downtown Washington and cities across the country Saturday to protest the Supreme Court nomination of Judge Amy Coney Barrett and to build momentum to vote President Donald Trump out of the White House.

Nearly four years after an election that galvanized millions of protesters to march in cities nationwide, Women’s March leaders hope to bring a final show of force before Nov. 3 with a rally in the nation’s capital and in more than 429 marches across all 50 states. Organizers say more than 116,000 people have pledged to march or participate in other actions Saturday.

“Everything we’ve been doing has been leading up to this,” said Caitlin Breedlove, deputy executive director of organizational advancement for the Women’s March. “We’re not only in resistance. We’re actually fighting for what we need to build.”

The march is taking place days before the Senate holds its first vote to confirm Barrett to replace the late Justice Ruth Bader Ginsburg, a liberal leader and feminist icon. The Senate Judiciary Committee is scheduled to vote Thursday on the nomination of Barrett, who would cement the conservative advantage on the court. The Republican majority is expected to approve the nomination.

By 11 a.m. Saturday, several hundred people had gathered at Freedom Plaza ahead of a noon rally urging women to vote and calling on Congress to suspend the Supreme Court confirmation process. After the rally, participants plan to march southeast along Pennsylvania Avenue NW and then Constitution Avenue NW to the Supreme Court.

Amid the protesters decked out in bright pink hats and bejeweled face masks, 7-year-old twins Harriet and Myles Gilliam of Boston sat stoically next to their mother. Harriet, who was dressed as Ginsburg, complete with lace collar, was taking part in her third Women’s March. Myles was dressed in a suit and held a sign that resembled the one held by the late congressman John Lewis, D-Ga., in his iconic 1961 mug shot taken after he was arrested for using a bathroom reserved for White people in Mississippi.

“You can use social media all you want, but there’s something to be said about showing up,” said Justina Gilliam, 40, who said she had attended every Women’s March in Washington.

Each year since pink-hatted women first flooded the nation's capital the day after Donald Trump's inauguration in 2017, the Women's March has organized marches in January nationwide, promoting a list of policy demands and helping motivate women to run for office in record numbers. But the marches in recent years have drawn much smaller crowds than the first historic showing. The national organization has at times struggled to remain relevant, as scores of its initial attendees have redirected their attention toward other causes.

The march comes amid an economic recession that has fallen especially hard on women of color and mothers, a Supreme Court nomination that many fear threatens the reproductive rights of women, and a presidential election that could be decided in large part by women. Former vice president Joe Biden holds a 23 percentage point advantage over Trump among female likely voters (59% to 36%), according to a Washington Post-ABC News poll. Meanwhile, Trump and Biden split men, with 48% each.

The gender gap is even bigger in the suburbs, where women favor Biden by 62% to 34%, according to the poll. Men in the suburbs lean toward Trump, with 54% supporting his reelection, while 43% back Biden.