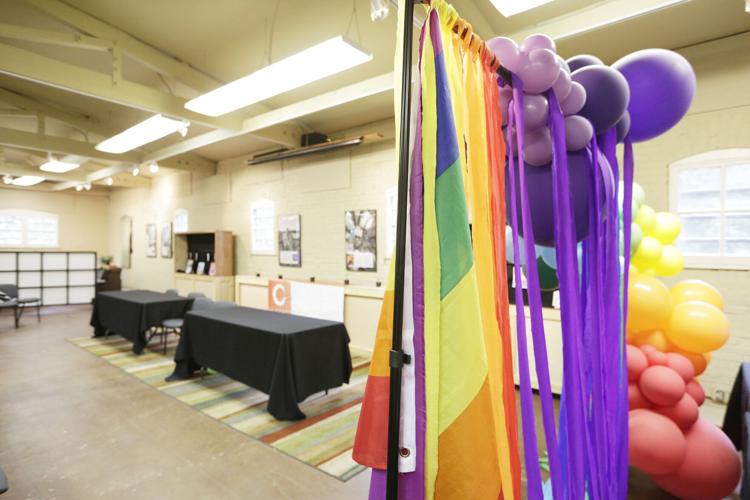 Decorations from a pride event are seen at the Human Rights Education Institute, on June 13 in Coeur d'Alene, Idaho. 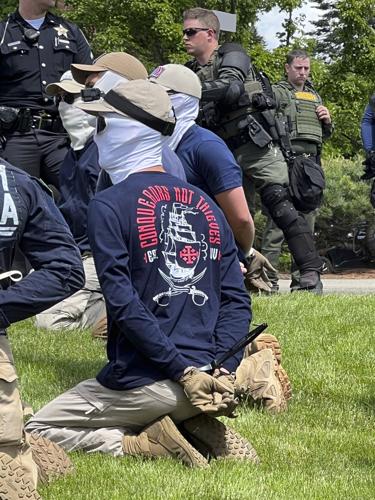 Authorities arrest members of the white supremacist group Patriot Front near an Idaho pride event June 11 after they were found packed into the back of a U-Haul truck with riot gear.

Decorations from a pride event are seen at the Human Rights Education Institute, on June 13 in Coeur d'Alene, Idaho.

Authorities arrest members of the white supremacist group Patriot Front near an Idaho pride event June 11 after they were found packed into the back of a U-Haul truck with riot gear.

The surge in right-wing hate-mongering against LGBTQ people is spilling into violence, with high-profile attacks this month casting fear over Pride celebrations throughout the country.

Extremism researchers have long warned of an escalating risk as hard-right Republicans and militant groups portray LGBTQ people as "groomers" targeting children, along with other baseless smears. Now, provocateurs are acting on those messages in what President Joe Biden last month called "rising hate and violence" targeting LGBTQ communities.

The attacks have intensified this month during the first big Pride events since pandemic restrictions were lifted, most notably with the white nationalist Patriot Front's foiled attempt to disrupt a celebration in northern Idaho.

In recent days, right-wing politicians and preachers have openly called for killing LGBTQ people. On a conservative talk show, Mark Burns, a Donald Trump-allied congressional candidate from South Carolina, called "LGBT, transgender grooming" a national security threat and proposed using treason laws as the basis for "executing" parents and teachers who advocate for LGBTQ rights. In Texas last Sunday, a pastor railed against Pride month and said LGBTQ people "should be lined up against the wall and shot in the back of the head."

A study released June 16 signals these are not isolated incidents. Anti-LGBTQ activity including demonstrations and attacks increased more than four times from 2020 to 2021, from 15 incidents to 61, according to the global nonprofit conflict-monitoring group known as ACLED. As of early June, ACLED counted 33 anti-LGBTQ incidents so far this year, indicating an even bleaker 2022.

Baltimore authorities last week were investigating two separate fires on the same block — one at a house where a Pride flag was set on fire, and another across the street at a home decorated for Pride, according to local news reports. Three people were injured in one of the fires.

Analysts draw a direct link from hateful political speech to attacks on the ground. The ACLED report notes that the rise in violence comes as "right-wing politicians and media outlets have mainstreamed the use of increasingly inflammatory rhetoric against the LGBT+ community."

Trans people have been particularly targeted. The Human Rights Campaign, the nation's largest LGBTQ advocacy group, says the past year saw record violence against transgender and gender-nonconforming people. Women of color, especially Black trans women, were the most frequent targets.

In that same time frame, state legislators introduced more than 250 anti-LGBTQ bills, many of them designed to stop transgender youths from participating in sports. At least 24 of the bills were enacted, according to the Southern Poverty Law Center, giving anti-LGBTQ activism "one of its most successful years" in terms of legislation.

The LGBTQ media advocacy group GLAAD said that political hate speech was leading to violence in a statement issued after the arrests in Idaho. The group said "anti-LGBTQ rhetoric and the nearly 250 anti-LGBTQ bills introduced this year are responsible for this dangerous climate," along with tech platforms that are "fueling the hate and misinformation that inspire white supremacist groups like the Patriot Front."

Targets have said the attacks are unnerving even when they don't involve physical violence.

Earlier this month in San Lorenzo, California, a group of suspected Proud Boys, a far-right group with a history of violence, interrupted a drag queen storytelling hour by screaming anti-LGBTQ slurs in an incident authorities are investigating as a hate crime. In an interview with Teen Vogue, event host Kyle Chu, whose drag name is Panda Dulce, described up to 10 Proud Boys marching in, including one in a T-shirt emblazoned with a gun and the words "Kill your local pedophile."

"We stopped the song and the Proud Boys . . . started hurling insults, calling me a pedophile and a groomer," Chu said in the interview, adding that she was taken to a safe room as organizers called authorities. Chu summed up the incident as "terrifying."

In Arlington, Texas, Proud Boys were among the protesters who showed up to a drag brunch that was for an over-21 crowd. Amateur video of the incident shared online by LGBTQ activists showed protesters screaming anti-gay slurs in their targets' faces. One man was filmed acknowledging that he was blocking the brunch participants' entry, saying he was conducting a "citizen's arrest."

Extremism monitors at the Anti-Defamation League tracked seven in-person extremist activities targeting LGBTQ people over a recent weekend, according to an ADL summary of the recent threats. The summary included a June 12 Pride event in Georgia that was canceled because of anonymous threats "targeting the rally's location, time and date." In a separate incident the next day, according to the ADL, white supremacists in New Jersey protested a drag event during a Pride celebration, "with one individual displaying a sign reading, 'Hands off kids.'"

The intimidation also has led to moments of defiance, as in North Carolina, where threats of violence prompted organizers to cancel a drag queen storytelling event at Pride in Apex, a suburb of the capital, Raleigh. Local news reports said town officials had received complaints and that the festival's chairman was warned that he and his family "will be harmed" if the event took place.

Outraged, an advocacy group called Equality North Carolina stepped in to sponsor Apex Pride and reinstate the story hour. The group said in a statement that LGBTQ people would fight attempts "to invade our spaces, to silence us, to disperse us, and limit our freedom to be ourselves in our community."

Several of the incidents illustrate what the ACLED report called "cross-pollination opportunities," the coalescing of disparate right-wing factions around common targets such as critical race theory, pandemic-era lockdowns and abortion access. These days, anti-LGBTQ activism has jumped to the top of that list.

The report noted that a June 4 demonstration against a drag show in Dallas brought together "self-proclaimed 'Christian Fascists,' adherents to the QAnon conspiracy movement" and several other extremist factions.

"They're actually building solidarity and the left is not," said Eric Stanley, an associate professor of gender and women's studies at University of California at Berkeley.

For Stanley, also a community organizer, the issue is personal. Menacing emails arrive every week. Stanley is always on the lookout for unfamiliar faces among students, wondering "who's going to film you, who's going to storm the classroom, who's going to attack you."

"In the last few years, I definitely think about, 'Where are the exits? Is it too high to jump out of this window?' " said Stanley, who teaches trans studies classes.

Whether — or to what extent — to work with law enforcement agencies is a contested topic as LGBTQ advocates figure out how to respond. Stanley belongs to the camp that rejects partnering with police because of law enforcement's longtime patterns of discrimination and violence.

Other organizations have close ties to law enforcement officials but acknowledge the frictions.

"With everything that's happened in the Black Lives Matter movement and the distrust of police, it's this really hard, fine line to navigate," said Jeff Mack, executive vice president of the Matthew Shepard Foundation, a LGBTQ nonprofit group that supports victims of hate crimes.

Those who favor working with police were encouraged that Idaho authorities arrested dozens of masked members of the white nationalist group Patriot Front before they could disrupt a Pride event in Coeur d'Alene, Idaho. The city's police chief said the group, piled into the back of a U-Haul, had an "operations plan" for Pride and gear such as shin guards, shields, helmets, at least one smoke grenade and long metal poles.

The 31 men charged with misdemeanor conspiracy to riot came from at least 11 states, including Colorado, a point that was noted on a Denver Pride planning call Monday, two days after the Idaho incident.

Mack said he and other Hate Free Colorado organizers were in "disbelief" and couldn't help but wonder what they might face in Denver. Still, there was no question of scaling back.

© Copyright 2022 Central Oregon Media Group, LLC, The Bulletin, 320 SW Upper Terrace Dr, Suite #200 Bend, OR | Terms of Use | Privacy Policy | Do Not Sell My Info
Powered by BLOX Content Management System from TownNews.com.
You don't have any notifications.

Start Your Day with Local News

Submitting this form below will send a message to your email with a link to change your password.

An email message containing instructions on how to reset your password has been sent to the e-mail address listed on your account.