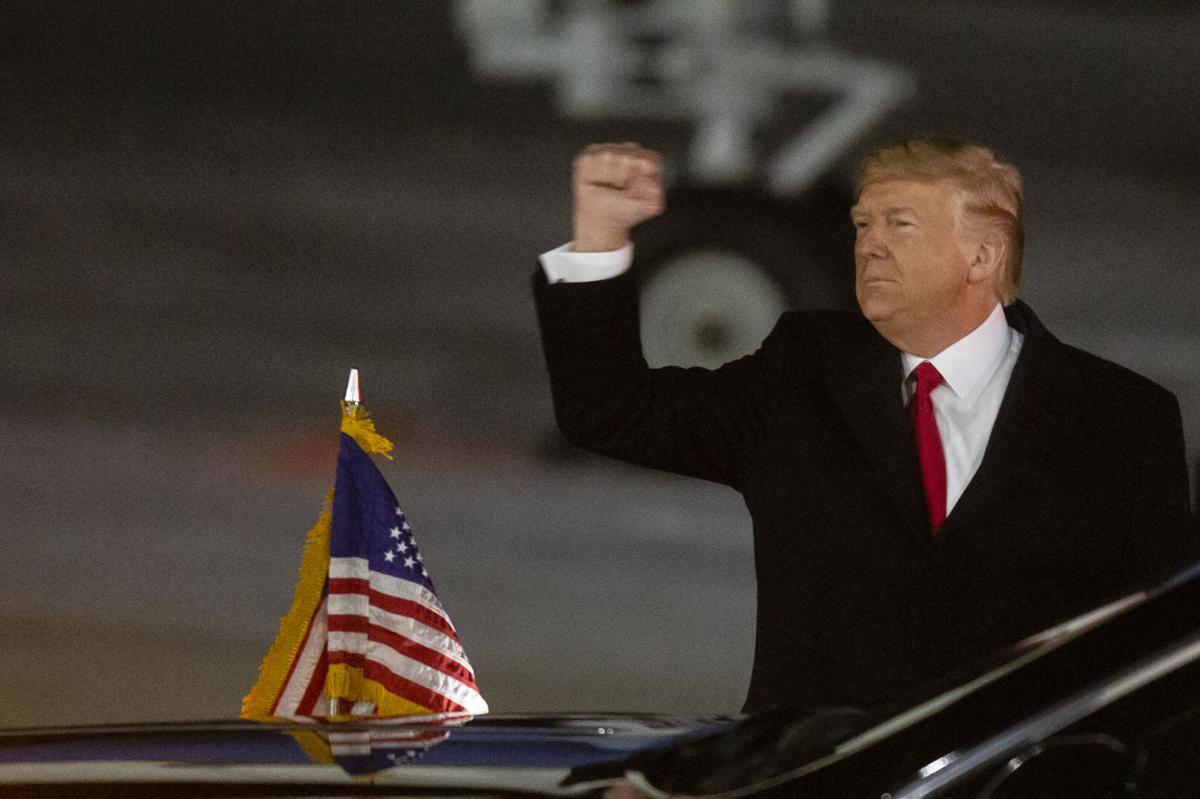 President Donald Trump raises a fist to his supporters while they cheer after Air Force One lands ahead of a Christmas campaign rally at the airport in Battle Creek, Michigan, on Wednesday. Trump was defiant, even as back home in Washington, a Democratic-led House voted “yes” on two articles of impeachment, making Trump only the third American president in history to be impeached. At the rally, Trump slammed Democrats, accusing the “radical left in Congress” of being “consumed with envy and hate and rage.” 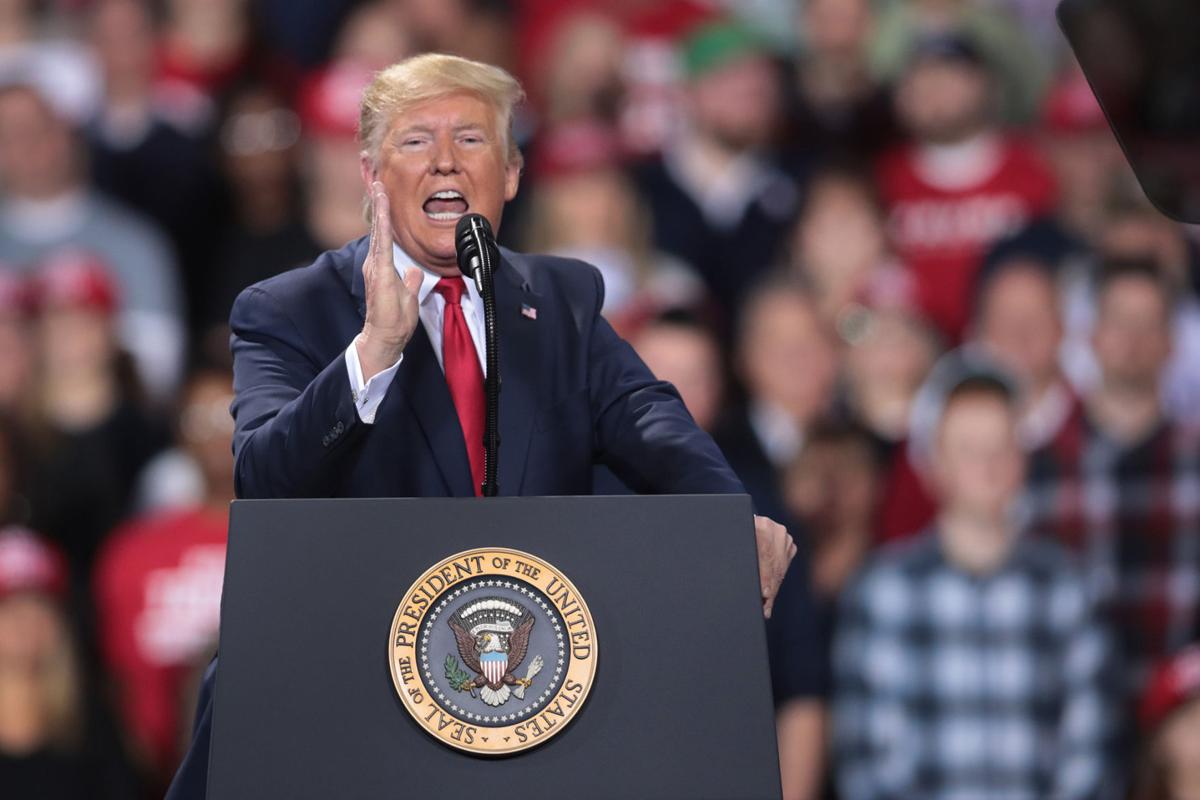 President Donald Trump addresses his impeachment during a "Merry Christmas" campaign rally at the Kellogg Arena in Battle Creek, Mich., on Wednesday, Dec. 18, 2019. 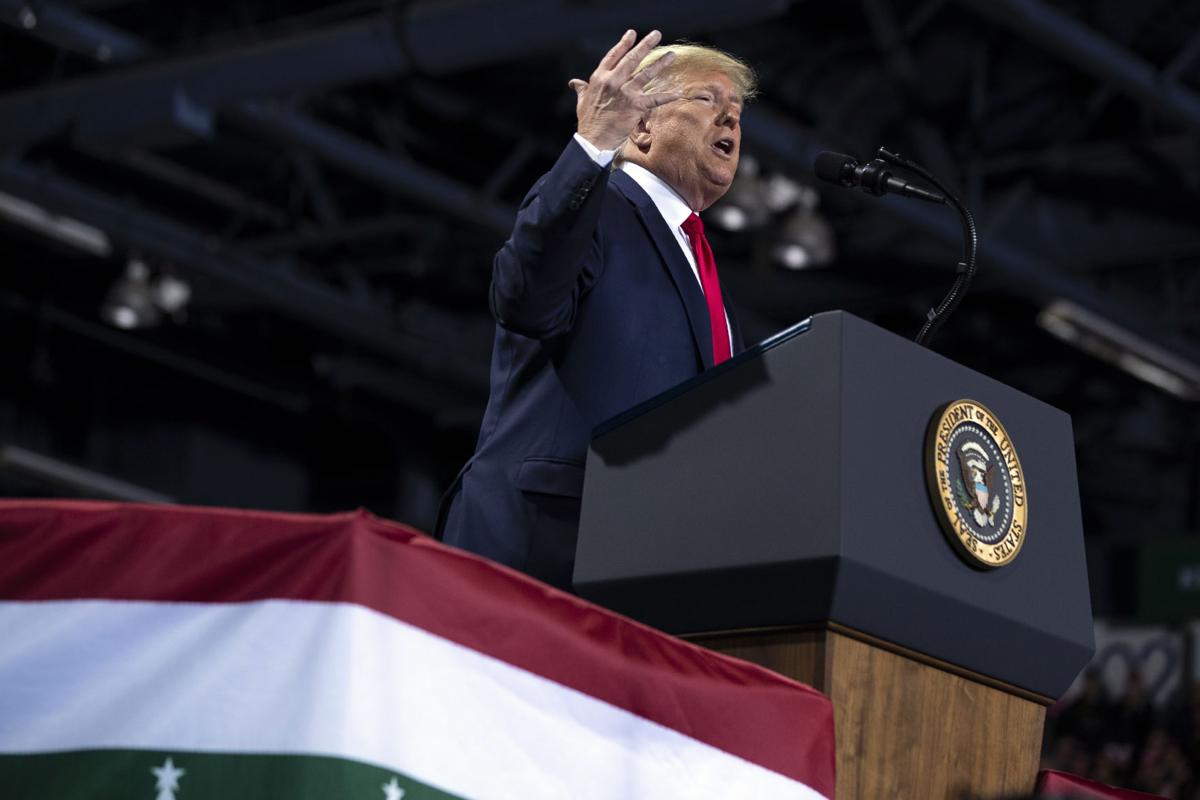 President Donald Trump raises a fist to his supporters while they cheer after Air Force One lands ahead of a Christmas campaign rally at the airport in Battle Creek, Michigan, on Wednesday. Trump was defiant, even as back home in Washington, a Democratic-led House voted “yes” on two articles of impeachment, making Trump only the third American president in history to be impeached. At the rally, Trump slammed Democrats, accusing the “radical left in Congress” of being “consumed with envy and hate and rage.”

President Donald Trump addresses his impeachment during a "Merry Christmas" campaign rally at the Kellogg Arena in Battle Creek, Mich., on Wednesday, Dec. 18, 2019.

The House of Representatives voted late Wednesday to impeach President Donald Trump on charges that he abused his office and obstructed Congress, with Democrats declaring him a threat to nation and branding an indelible mark on the most turbulent presidency of modern times.

After 11 hours of fierce argument on the House floor between Democrats and Republicans over Trump’s conduct with Ukraine, lawmakers voted almost entirely along party lines to impeach him. Trump becomes the third president in U.S. history to face trial in the Senate — a proceeding that will determine whether he is removed from office less than one year before he stands for reelection.

On Trump’s 1,062nd day in office, Congress brought a momentous reckoning to an unorthodox president who has tested America’s institutions with an array of unrestrained actions, including some that a collection of his own appointees and other government witnesses testified were reckless and endangered national security.

The Democratic-controlled House passed two articles of impeachment against Trump — abuse of power and obstruction of Congress — related to the president’s attempts to withhold military aid to Ukraine and pressure its government to investigate former Vice President Joe Biden, a potential 2020 Democratic opponent.

The House voted 230 to 197 to approve the article charging abuse of power, with the gavel falling about 8:30 p.m. Eastern time. On the obstruction of Congress vote, which followed soon after, the tally was 229 to 198.

All Republicans voted against both articles.

A smattering of Democrats defected.

House Speaker Nancy Pelosi, D-Calif., framed the day’s proceedings through the long lens of history, reciting the Pledge of Allegiance and singling out the line, “the republic for which it stands.”

“Very sadly, now our founders’ vision of a republic is under threat from actions from the White House,” Pelosi said.

She added, “If we do not act now, we would be derelict in our duty.”

The Senate is widely expected to acquit Trump, since conviction and removal would require 67 votes in a chamber where Democrats and their allies hold 47 seats. If Trump were acquitted, it would launch an unpredictable stretch of his presidency; his reaction would be uncertain after opponents had taken a powerful but ultimately unsuccessful shot at removing him.

In coming days, Pelosi will name House impeachment “managers,” who will act as prosecutors in the Senate trial in January. The White House, for its part, has begun the process of selecting the lawyers who will mount its defense. And lawmakers from both parties are heading home for a recess, during which they are likely to confront voters on all sides of the impeachment issue.

What will Democrats do?

The next step in this process is when the House reports the articles of impeachment to the Senate, which will then set about holding the trial. But the process would then be in the hands of the majority Republicans, and Senate Majority Leader Mitch McConnell, R-Ky., has made clear that he’s not exactly interested in holding a robust trial with new witnesses. In fact, he’s said he would coordinate the whole thing with the White House.

If it goes to the Senate, there will be negotiations over how that trial will be conducted. Republicans can indeed control much of it, given that they have a 53-47 majority and can set the rules. Democrats have said they want new witnesses such as acting White House chief of staff Mick Mulvaney and former national security adviser John Bolton. Do they propose some kind of horse trade — perhaps allowing Joe Biden to testify in exchange for one of those two? How do they play this, when it’s no longer in their hands?

It sounds like there could also be a curveball ahead. House leaders are toying with a suggestion some legal scholars have floated: that the House wait to report the articles to the Senate.

“Some think it’s a good idea. And we need to talk about it,” said House Majority Leader Steny Hoyer, D-Md. He added, “It’s an interesting proposal. I don’t think that that’s the path we will follow, but that does not mean we will immediately deliver it. There are considerations related to other legislation.”

Rep. Earl Blumenauer, D-Ore., told Politico that Pelosi “indicated she was interested and considering it.”

The idea would basically be that doing so would deprive the Senate of the ability to acquit Trump and allow him to claim exoneration. And in the meantime, Democrats could continue to investigate and possibly win court cases to get key information and witness they haven’t gotten thus far. Some Democrats have taken Pelosi’s decision not to name impeachment managers yet as a sign that this option is in play. Time will tell.

The downside for Democrats is if they think this whole process might hurt them in the 2020 election, it will prolong the process and bring it closer to the votes actually being cast.

Polarization on the House floor

Wednesday’s action punctuated a quarter-century of increasingly poisonous partisanship in Washington, one that arguably began during Bill Clinton’s presidency, was extended with rebellions against presidents George W. Bush and Barack Obama, and is culminating in the Trump era.

The intensity and polarization of the debate on the House floor vividly illustrated the extent to which leaders of the two parties now believe entirely different facts and are motivated by different concerns.

At times they sounded almost as if they were representing different countries.

Democrats characterized Trump as an immediate threat to the nation he was elected to lead, casting his actions as an unprecedented affront to American values. Republicans denounced those charges as unsubstantiated and the process as illegitimate, repeatedly accusing the Democrats of seeking to illegally overturn the results of the last election.

Trump, who has nursed deep feelings of persecution as his impeachment has grown more likely, watched the debate unfold from the White House. Ten minutes after press secretary Stephanie Grisham issued a statement saying the president was “working all day,” Trump vented his fury on Twitter: “SUCH ATROCIOUS LIES BY THE RADICAL LEFT, DO NOTHING DEMOCRATS. THIS IS AN ASSAULT ON AMERICA, AND AN ASSAULT ON THE REPUBLICAN PARTY!!!!”

Just before the House voted, Trump took the stage in Michigan, where he rallied an estimated 10,000 supporters at a sports arena in Battle Creek — a muscular display of political potency even at the historic low point of his presidency.

“This lawless partisan impeachment is a suicide march for the Democratic Party,” Trump told the crowd. He added, “After three years of sinister witch hunts, hoaxes, scams, tonight House Democrats are trying to nullify the ballots of tens of millions of patriotic Americans.”

Back in Washington, Pelosi sought to rebut allegations from Republicans that her party has cast about since Trump took office for a reason to impeach him.

“He gave us no choice,” Pelosi said, drawing applause from Democrats by declaring that “we are here to defend democracy for the people.”

Barring a drastic shift in momentum, Trump is expected to be acquitted in the Senate, where a two-thirds supermajority is required to remove a president who has been impeached.

Nevertheless, Trump’s impeachment by the House will be a defining mark on his legacy. Wednesday’s action cemented on a constitutional level the opposition party’s view that Trump is unfit to serve, elevating the informal resistance to his presidency, which has raged from coast to coast, into the permanent historical record.

Democrats said Wednesday that declining to punish a presidential demand that a foreign government influence an American election would be an unacceptable abdication of constitutional responsibility. Such an action clearly meets the standard of “high crimes and misdemeanors” that the Constitution lays out for impeachment, they said.

“The evidence is clear that President Trump took advantage of Ukraine’s vulnerability and abused the powers of his office to pressure Ukraine to help his reelection campaign,” said Judiciary Committee Chairman Jerrold Nadler, D-N.Y.

“This is the highest of high crimes, and President Trump must be held to account.”

Democrats and Republicans took turns at the rostrum delivering short, impassioned speeches — a furious debate that in many ways showcased how much Trump has remade the two parties.

The Republicans, mostly white men, stood staunchly behind the president and repeated many of his statements vilifying the opposition. The Democrats, notably more diverse in race and gender, uniformly attacked the president’s conduct as an affront to American values.

“When we say we uphold the Constitution, we are not talking about a piece of parchment,” said Rep. Adam Schiff, D-Calif., chairman of the House Intelligence Committee. “We’re talking about a beautiful architecture in which ambition is set against ambition, in which no branch of government can dominate another.”

Republicans responded that Democratic leaders had concocted a scheme to oust the president because they were afraid they could not beat him at the polls in next November’s election.

House Minority Leader Kevin McCarthy, R-Calif., said, “Democrats have wanted to impeach President Trump since the day he was elected — and nothing was going to get in their way, certainly not the truth.”

I am in awe of the FOX entertainment division that has so quickly spread the meme that Trump was not impeached (twice) because the impeachment papers have not yet been sent to the Senate. It must have taken some serious brainstorming to come up with that whopper.

In other Trump news not reported in The Bulletin are the comments from the Oregon members of Congress. 12/18/19 The Oregonian / Trump impeachment: Oregon's Congressional leaders lend eight 'yes' votes.

Greg Walden has his say. I particularly liked his "Trump is unique in the history of the American presidency. No one has led as he has." I'm not sure leading is the proper word to use with regards to Mr. Trump. You would think the major paper in Walden's district would print what he had to say.

I won't miss Greg, particularly after his last three years in office. Too bad we don't have term limits.