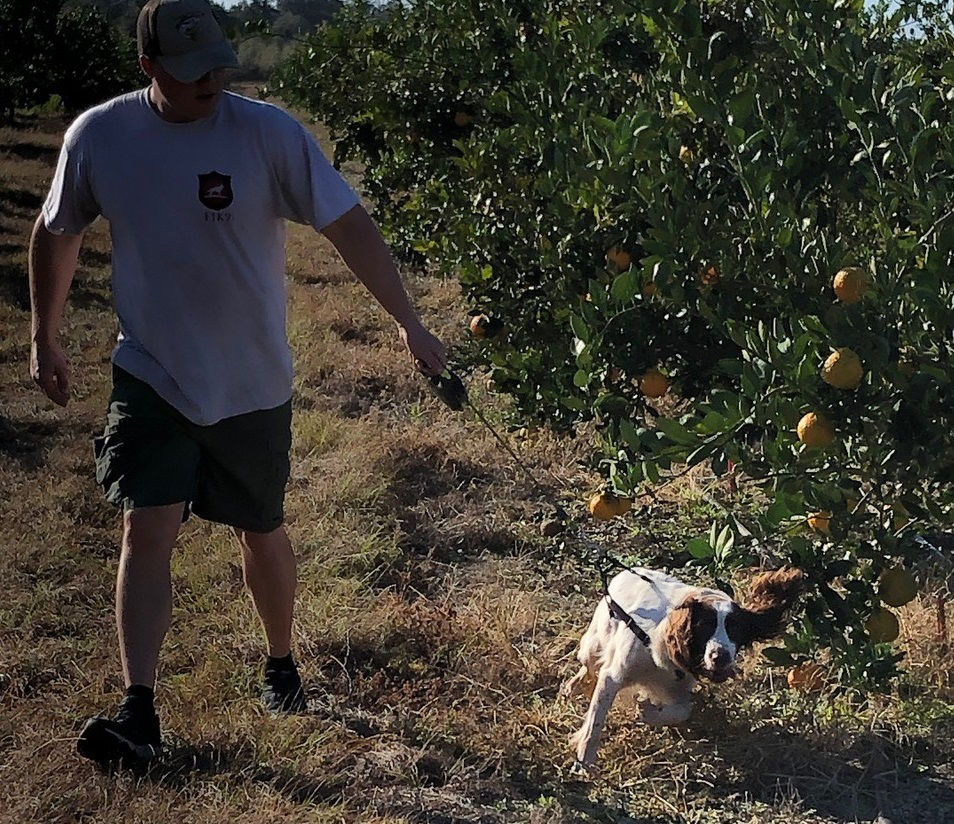 Bello, a springer spaniel, uses her nose in a quest to detect disease in a citrus grove in Perry, Florida. With her is handler Tyler Meck. 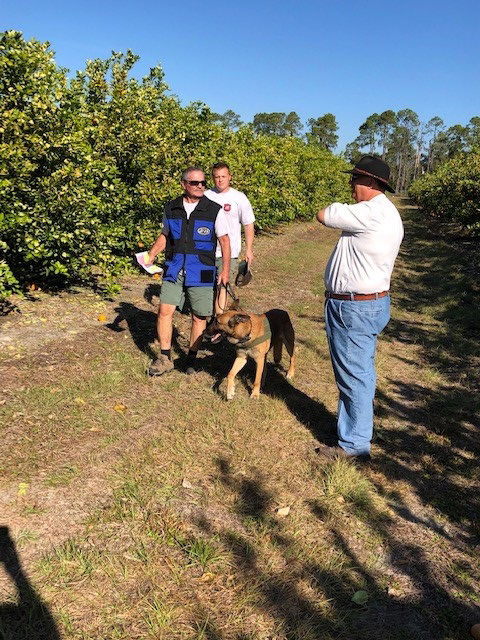 Andy Jackson, right, discusses with Jerry Bishop and Tyler Meck where Imi, a German shepherd, should focus her efforts at Jackson's orange grove in Florida.

Bello, a springer spaniel, uses her nose in a quest to detect disease in a citrus grove in Perry, Florida. With her is handler Tyler Meck.

Andy Jackson, right, discusses with Jerry Bishop and Tyler Meck where Imi, a German shepherd, should focus her efforts at Jackson's orange grove in Florida.

PERRY, Fla. — On a crisp, cloudless morning, Andy Jackson stood adjacent to a row of orange trees, his mind on the disease that has wiped out much of Florida’s citrus industry. He gazed intently at the weapon he had hired to defend his 25-acre grove against that scourge: a springer spaniel named Bello.

At first glance, Bello might look more cute than formidable. But watch her work — running lickety-split alongside rows of trees, occasionally sitting under one to signal she has sniffed out the disease — and you might arrive at the opposite conclusion.

Bello and her handler, Tyler Meck, work for F1 K9, a Florida firm that trains and provides dogs for an array of purposes, including the detection of explosives, drugs and agricultural disease. They represent an innovative, government-backed effort to counter the devastation caused by Huanglongbing, or HLB, a bacterium that prevents fruit from ripening.

Agricultural experts and analysts estimate that since it surfaced in about 2005, HLB has caused a 75% decline in the state’s $9 billion citrus industry and forced nearly 5,000 growers to abandon the business.

The culprit is a small flying insect, the psyllid, which acts as a highly effective HLB distributor. The insect feeds on the plant, drawing out its juices and the bacteria, and when it feeds again, it deposits the bacteria into the next plant.

“That psyllid is really a little flying hypodermic needle,” said Tim R. Gottwald, a plant epidemiologist with the U.S. Department of Agriculture.

As HLB continues to spread with deadly efficiency, some hope dogs will be the heroes to vanquish this crop-destroying foe. After all, canines have already demonstrated the ability to sniff out plant diseases, including citrus canker and plum pox virus, which infects peach, plum and cherry trees.

The USDA has spent the better part of 15 years studying dogs’ capability to sniff out HLB, and it has found that the animals do so with 99% accuracy, according to Gottwald. Nineteen dogs, all owned by F1 K9, now boast this expertise and have been deployed in Florida and California. Experts say the dogs aren’t likely to stem the tide of the citrus industry’s destruction — it may be too little, too late — but they do offer the fastest and most accurate diagnosis available.

Using a computer model to track the trajectory of the disease with and without canine assistance, Gottwald said he found that early detection by dogs, followed by removal of infected trees, can keep orchards profitable over a 10-year period. Relying on other detection methods — visual inspection and a laboratory technique — would result in orchards operating at a loss within one to two years, the model found.