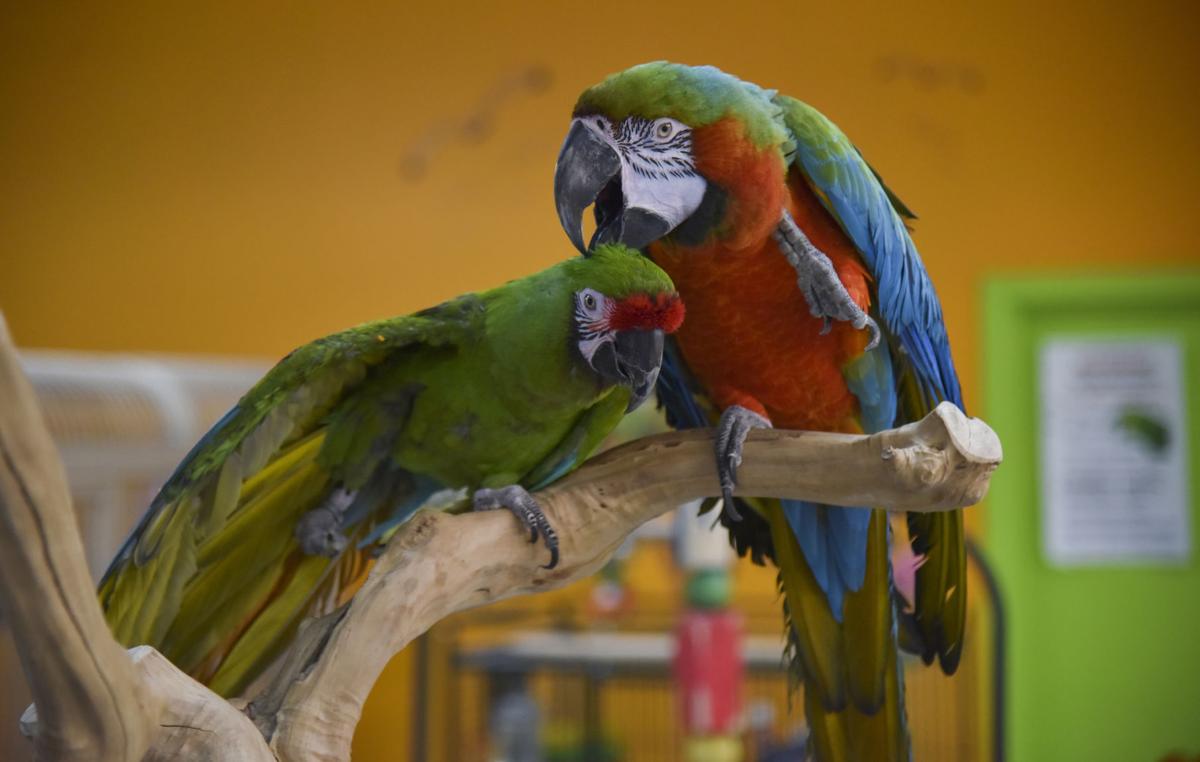 Suzie, a military macaw, left, and Kirby, a harlequin macaw, groom each other at TC Feathers Aviary on Thursday. Their offspring may be the first cross between the types of macaws. 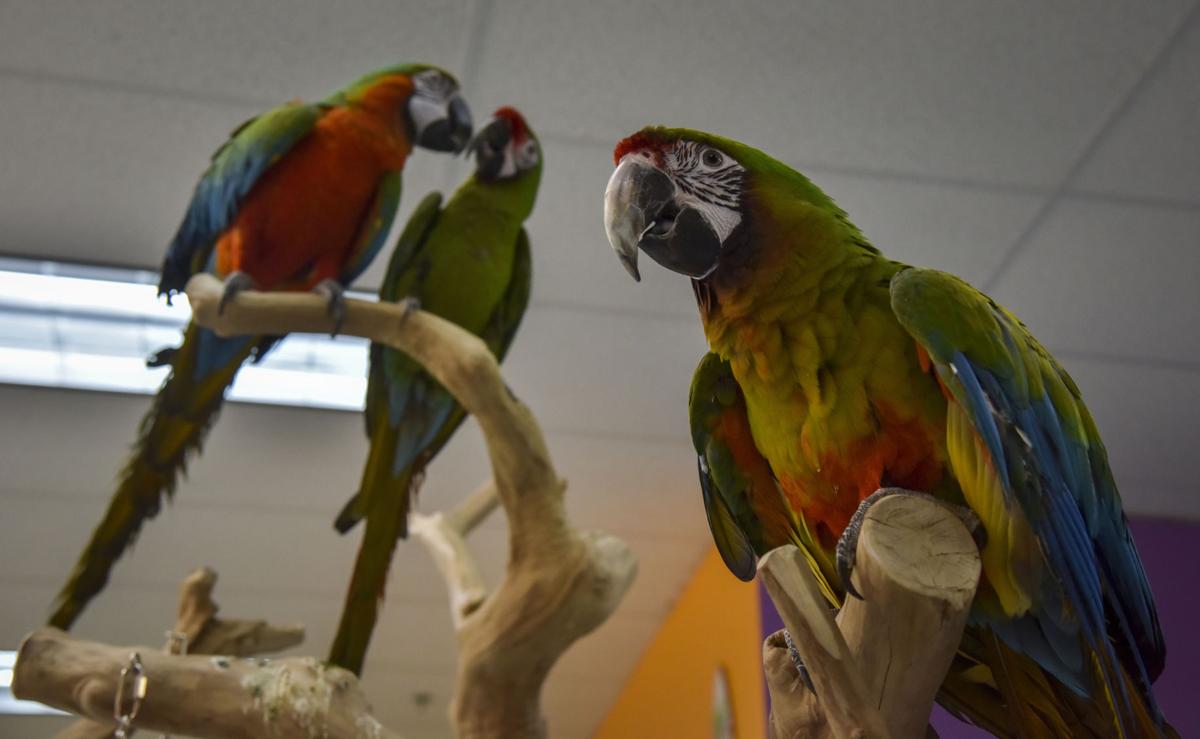 Kuzie, a hybrid, with his parents in the background, at TC Feathers Aviary on Jan. 2, 2020. MUST CREDIT: Washington Post photo by Jahi Chikwendiu 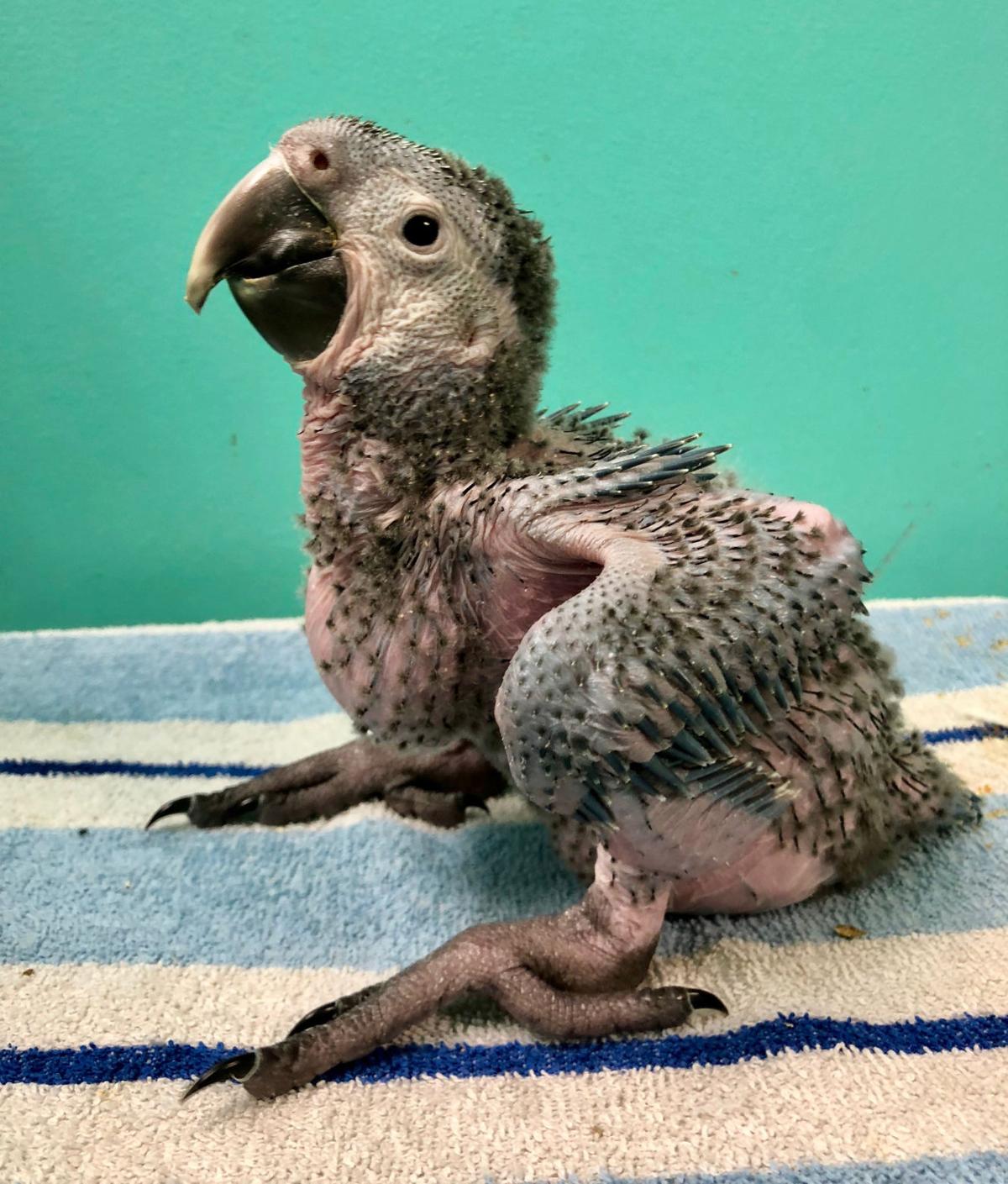 Suzie, a military macaw, left, and Kirby, a harlequin macaw, groom each other at TC Feathers Aviary on Thursday. Their offspring may be the first cross between the types of macaws.

Kuzie, a hybrid, with his parents in the background, at TC Feathers Aviary on Jan. 2, 2020. MUST CREDIT: Washington Post photo by Jahi Chikwendiu

WASHINGTON — When they met, Kirby and Suzie differed in ways that went beyond what people usually notice first about them, their color.

He was large. She was small.

He had spent most of his life in a loving home. She had been abandoned when she was young.

He was bold and a gifted talker. She was sweet and more selective with her words.

Tammy Morgan says she would never have thought of pairing the two — and yet, she saw how they quickly gravitated toward each other, how they soon started sneaking off to be alone and how he now watches over her, ever ready to place himself between her and any perceived danger.

“They fell in love,” Morgan says.

There are love stories, and then there is the love story of Suzie and Kirby. Theirs is a rare pairing, one that both defies nature and resulted from it. The two are species of parrots that don’t normally mate: Kirby is a harlequin macaw and Suzie is a military macaw.

In the wild, they likely wouldn’t have come together. In a Virginia aviary, they are inseparable.

They are also parents. About a year ago, their firstborn hatched from an egg, leaving the aviary with a unique quandary: What do you call a species that doesn’t seem to exist anywhere else?

Morgan, who owns TC Feathers Aviary in suburban Virginia along with her wife, Carey Morgan, says the two never intended to breed macaws. It is difficult work even under the best of conditions, says Tammy Morgan, who has bred cockatiels, conures and caiques.

In their case, it seems, nature stepped in, threw her arms up and said, “Eh, what rules?” Quiet and secluded does not describe the aviary. It also serves as a store, so it often is a cacophony of birds squawking and customers talking, but that didn’t deter Suzie and Kirby from taking their affection to another level. Around 3:30 p.m. each day, the two would make their way from a backroom, where birds perch on makeshift trees and in cages, to the front of the store, where the cash register sits.

The staff always knew they were coming because as the two waddled, their talons clicked against the tile.

The staff also knew where they were headed. Each day, the two picked the same unlikely place for an avian rendezvous — a cat carrier. The carrier sits against a wall near the front door and is basically a large open cage lined on the bottom with a plush, pink bed. It provides the cats that live in the store (and keep the mice away) a place to lounge.

But when Suzie and Kirby showed up, any cat that happened to be in that carrier knew enough to leave. Everyone knew what was about to happen for the next 20-or-so minutes.

“It would be one thing if they were quiet, but they’re so loud,” Morgan says. “So finally, I put them in the same cage. It was better there than in front of the store, in a cat carrier.”

Over a decade of companionship

Morgan first started taking care of Suzie more than a decade ago after she and two other macaws were left in front of her house by a man who lived with his parents and realized he couldn’t take care of the birds. The aviary sees that situation often enough that the staff warns people who come to purchase pets about the responsibility. If someone comes in saying they want a bird that talks or that matches their furniture, that person will leave with instructions to go home and do some research.

You have to be ready for a pet that is as demanding as it is stunning. I first learned about the aviary, which used to exist under a different name and at a different address, when my husband and I walked in to pick out two newborn cockatiels. Those birds are now two affectionate 8-year-olds with their own personalities and (loud) ways of telling us what they want.

On a recent afternoon, the volume in the backroom of the aviary is deafening. It is almost time for Morgan to feed some of the birds by hand, and they aren’t feeling patient.

Meanwhile, Suzie and Kirby sit quietly on nearby branches of the same makeshift tree.

When Suzie first came to live at the aviary full time a few years ago, she had suffered a loss. She had paired up with another macaw that died, and “she was really missing” him, Morgan says.

Kirby had been raised since he was young by Morgan’s wife and was one of several male macaws living at the aviary at the time. He was also the biggest bird in the place and had developed a reputation of being rude to other macaws in group situations. With Suzie, though, he was gentle.

They would clean each other’s feathers with their beaks, which is called preening and requires a level of comfort and trust.

When the two began sharing a cage, no one knew what to expect. What they didn’t expect, though, were fertile eggs.

Morgan says Suzie laid two separate sets of egg at the bottom of the cage, but she didn’t know how to take care of them. Instead of sitting on them, she sat next to them, so they didn’t develop properly.

The next time she laid a set of eggs, Morgan pulled them from the cage and placed them in an incubator. Two didn’t make it.

But from the third egg, on a day when the store was crowded with people for the aviary’s inaugural Parrot Fest, came a tiny lump of a bird.

The aviary took suggestions from customers for a name and settled on “Kuzie,” a combination Suzie and Kirby.

The aviary’s staff, along with their friends, relatives and customers, also started researching whether a military macaw and harlequin macaw, which is a hybrid mix between a green-wing macaw and a blue-and-gold macaw, had ever produced an offspring.

They couldn’t find another.

What to call it?

Unsure what to call this new type of bird, and unable to find a name that already existed, the aviary again took suggestions. And they again picked one that gave a nod to both parents: “miliquin macaw.”

Morgan describes the days and weeks following Kuzie’s birth in October 2018 as both thrilling and scary. She didn’t know if he would survive. For five months, she woke up every 90 minutes in the night to make him formula and feed him.

She did the same in May 2019 when another egg hatched. This time it was a girl and she was named Millie.

Both Kuzie and Millie have lighter beaks than their parents, which they get from one side of their father’s genetics. They also seem to share his ease with words. Kuzie is fond of saying, “peekaboo.” And as Millie nuzzles against Morgan that recent afternoon, she says, “I love you.”

Occasionally someone will ask whether the siblings are for sale, and each time the answer is the same.

“At this point, everyone is so attached, not only us, but also our customers,” Morgan says. “They’re not going anywhere.”

If they produce more miliquins, those will be for sale.

When that time comes, she has just one hope: that Suzie and Kirby will figure out what comes after making those eggs.

“If they could figure out how to take care of their own children,” she says, “I would appreciate that.”