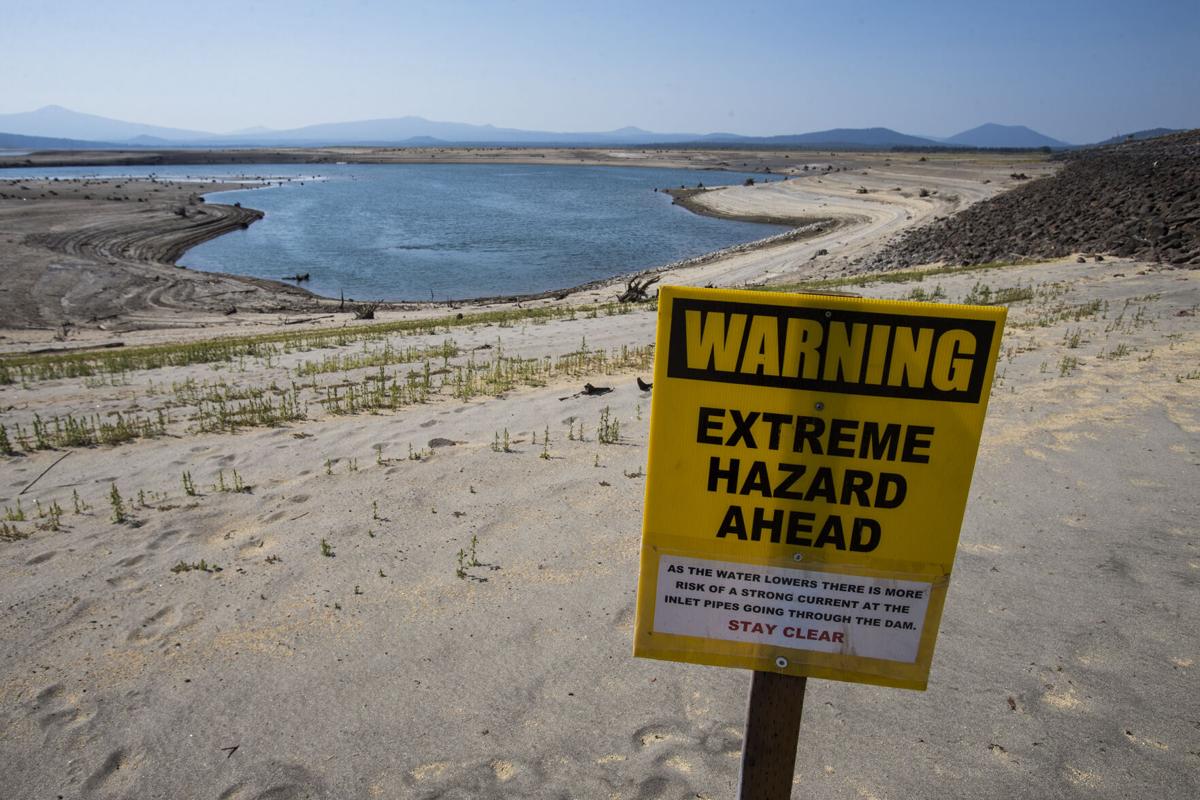 A sign warns visitors to stay away from the inlet pipes exposed from low water near the base of the Wickiup Reservoir dam on Sept. 4. 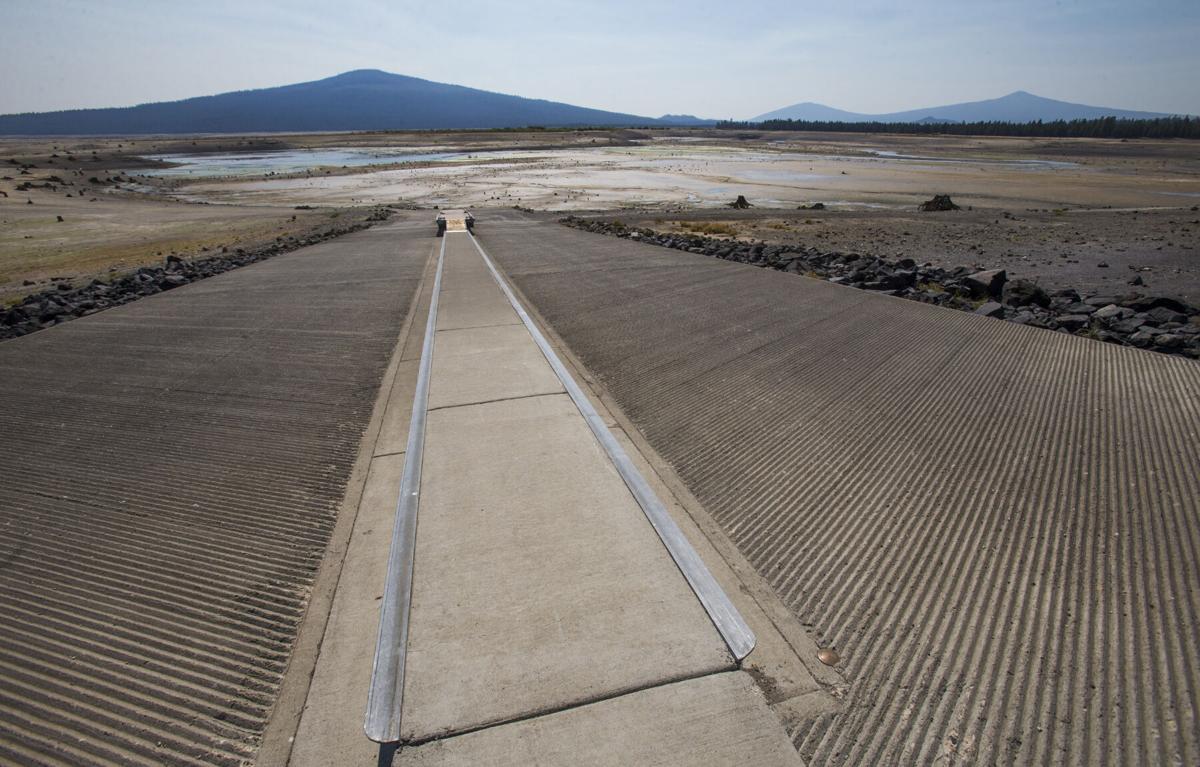 A large area of thick mud is exposed at the bottom of a boat ramp near Gull Point Campground at Wickiup Reservoir on Sept. 4, 2020. 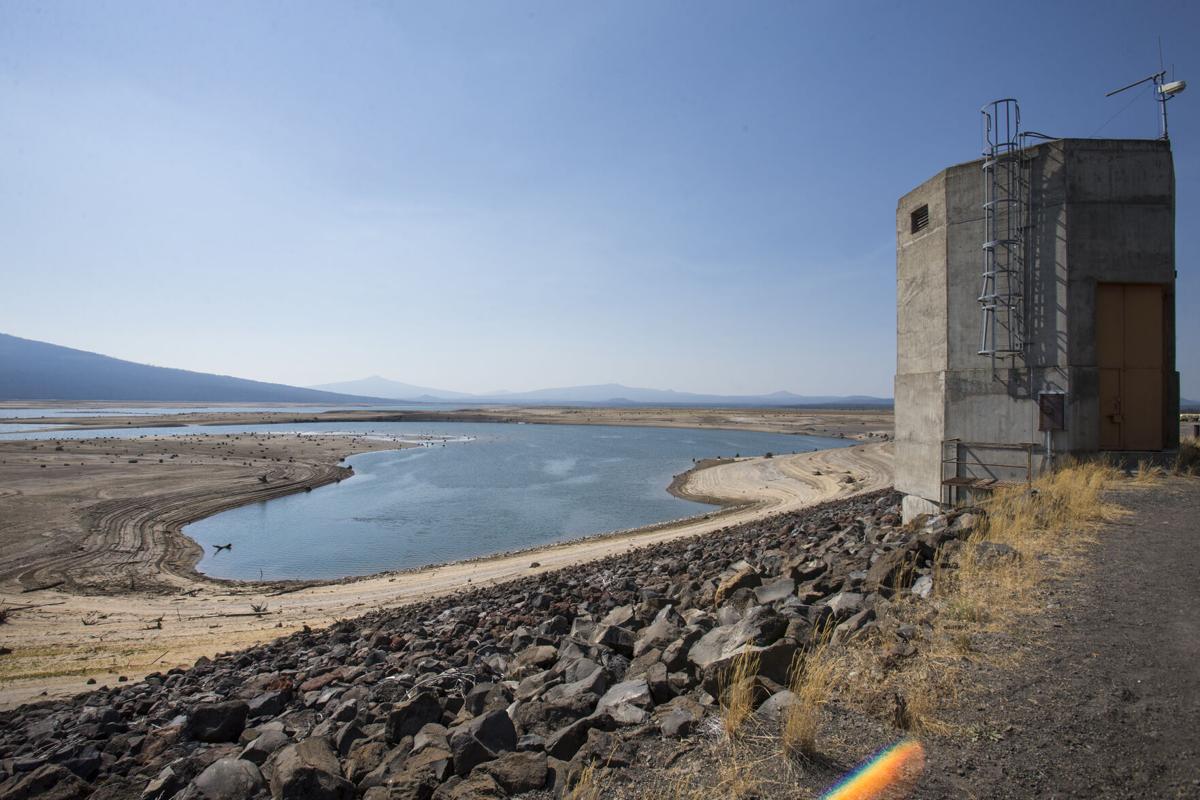 Areas of sand are exposed near the base of the Wickiup Reservoir dam on Friday, Sept. 4, 2020. 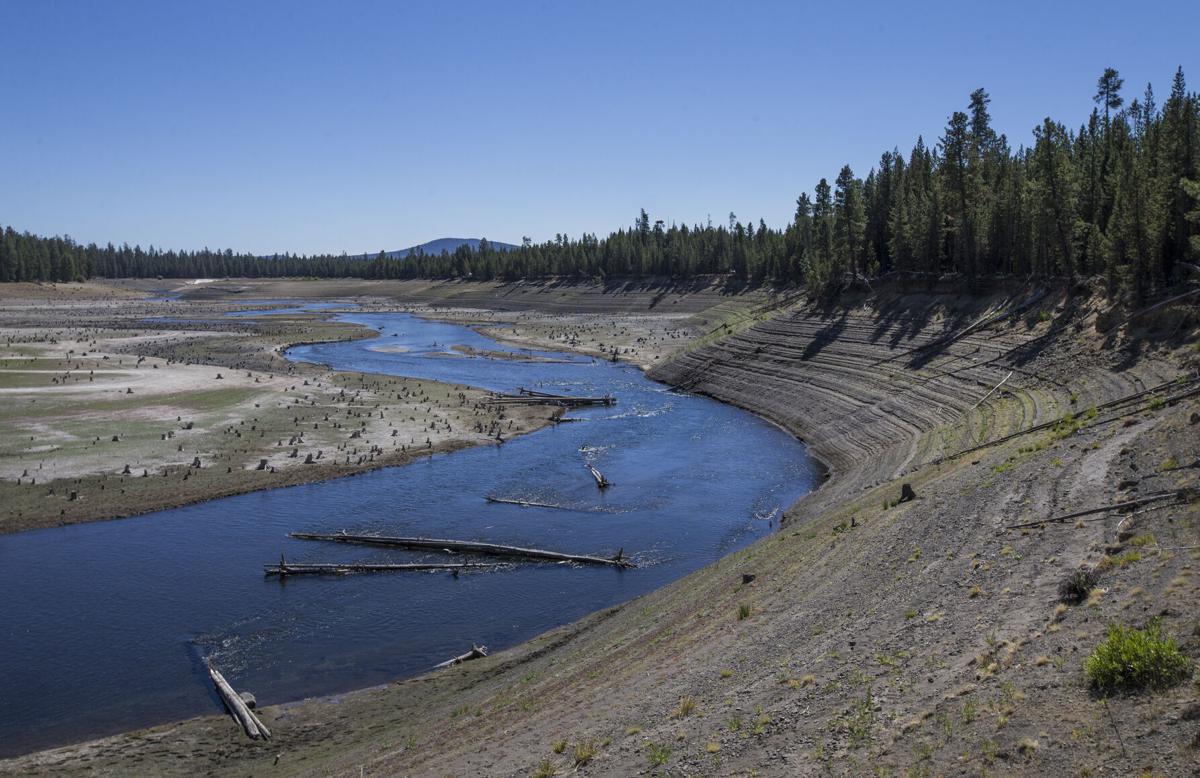 Water flows like a river through a section of Wickiup Reservoir on Aug. 29.

A sign warns visitors to stay away from the inlet pipes exposed from low water near the base of the Wickiup Reservoir dam on Sept. 4.

A large area of thick mud is exposed at the bottom of a boat ramp near Gull Point Campground at Wickiup Reservoir on Sept. 4, 2020.

Areas of sand are exposed near the base of the Wickiup Reservoir dam on Friday, Sept. 4, 2020.

Water flows like a river through a section of Wickiup Reservoir on Aug. 29.

Wickiup Reservoir, which stores water for thousands of ranchers and farmers in Central Oregon, has been drained to its bare bottom. As farmers attempt to manage water cutbacks, biologists are also faced with potentially dire circumstances for fish and wildlife in the area.

As of Monday, Wickiup’s water level was just 1% of capacity, according to the Bureau of Reclamation website. The reservoir is now at a historical low.

Located 33 miles west of La Pine, Wickiup flows into the Deschutes River where it’s used by kayakers, anglers and others who recreate in the river. Wildlife, including the Oregon spotted frog, also depend on water to flow out of Wickiup on a consistent basis. Further downstream, the water is channeled into canals that flow into the High Desert for irrigators.

The reservoir’s low level this year is due largely to the low starting point at the beginning of the irrigation season. When the irrigation water started to flow back in March, the reservoir was only about 75% full, due to low snowpack and several years of drought.

When Wickiup Reservoir starts the irrigation season full, average water usage will draw down the level to typically 25% to 30% full by the first of October. By that time, the canals turn off and the water begins to fill again before the next irrigation season, which starts in early April.

With Wickiup now empty, the flow of the Deschutes is now is in danger of rapid decline.

Water had been flowing out of the reservoir into the Deschutes at a rate of 1,100 to 1,200 cubic feet per second over the past week. Early Monday, the flow began to drop rapidly. By 12:15 p.m. Monday, it was 696 cfs. Jeremy Giffin, watermaster for the Deschutes Basin, said the flow to could drop as low as 400 cfs this week.

An empty reservoir means the Deschutes River will flow freely as it did before the reservoir was built, said Giffin.

“I am guessing the natural flow will be around 400 cubic feet per second, so that is basically where the flow will be until the end of September when we will take it down to roughly 105 cfs for the remainder of the winter,” said Giffin. “We are in unprecedented times. This will the first time we ever truly drained Wickiup to no storage at all.”

Water from Wickiup, which was completed in 1949, is siphoned out of the Deschutes River and channeled across miles of canals in the High Desert to reach farms from Bend to Madras. Prolonged drought has reduced the amount of water flowing into the reservoir each spring, resulting in lower water rations for farms across the region.

Mike Britton, general manager of the North Unit Irrigation District, said even with Wickiup drained, some water can still be made available to district patrons, but that remains unclear.

The water crisis has already impacted farmers in other districts, including the Arnold and Lone Pine irrigation districts, which ran out of water in August.

Rob Rastovich, a farmer east of Bend who relies on water from Wickiup, has watched his fields wilt since Arnold shut off his water supply.

“The entire hay crop has dried up; fields have turned to weeds. We will get zero hay this year,” said Rastovich, who also raises cattle. “Hay is required in order to feed cattle through the winter, when there’s no pasture. The price of buying hay I predict will exceed the value of selling the cattle. It’s looking like our 101st year of farming in Central Oregon might be our last.”

In addition to the lack of water for farms, environmentalists also worry that fish and wildlife, which rely on the Deschutes and Wickiup for their survival, are at risk.

Brett Hodgson, Deschutes District fish biologist for the Oregon Department of Fish and Wildlife, said he expects a repeat of events that played out in the fall of 2018. At that time, large numbers of fish escaped the dried-up reservoir to the Deschutes River through an outlet at the dam.

“Fish that remain in the reservoir appear to seek refuge in the deeper pools within the Deschutes River channel that runs through the reservoir bed,” said Hodgson. “Clearly not a favorable situation for fish and wildlife.”

Gail Snyder, executive director for the Bend-based environmental group Coalition for the Deschutes, is looking ahead to next year so river users don’t face a repeat of the current water crisis.

“I believe that what urgently needs to be done is to make adjustments to Oregon water policy that will facilitate water-sharing next year,” said Snyder.

“While essential to long-term water conservation, (conservation efforts) are too slow in their implementation to ensure the survival of farms and farmers,” said Snyder.

Snyder said water users in the Central Oregon Irrigation District, which has senior rights in the area, should be permitted to share their water allotment with farms in the North Unit Irrigation District. Splitting the allotments would allow NUID to retain more water in Wickiup, said Snyder.

“Making this change is a matter of political will,” said Snyder. “All the logistical matters are simply that, logistical.”