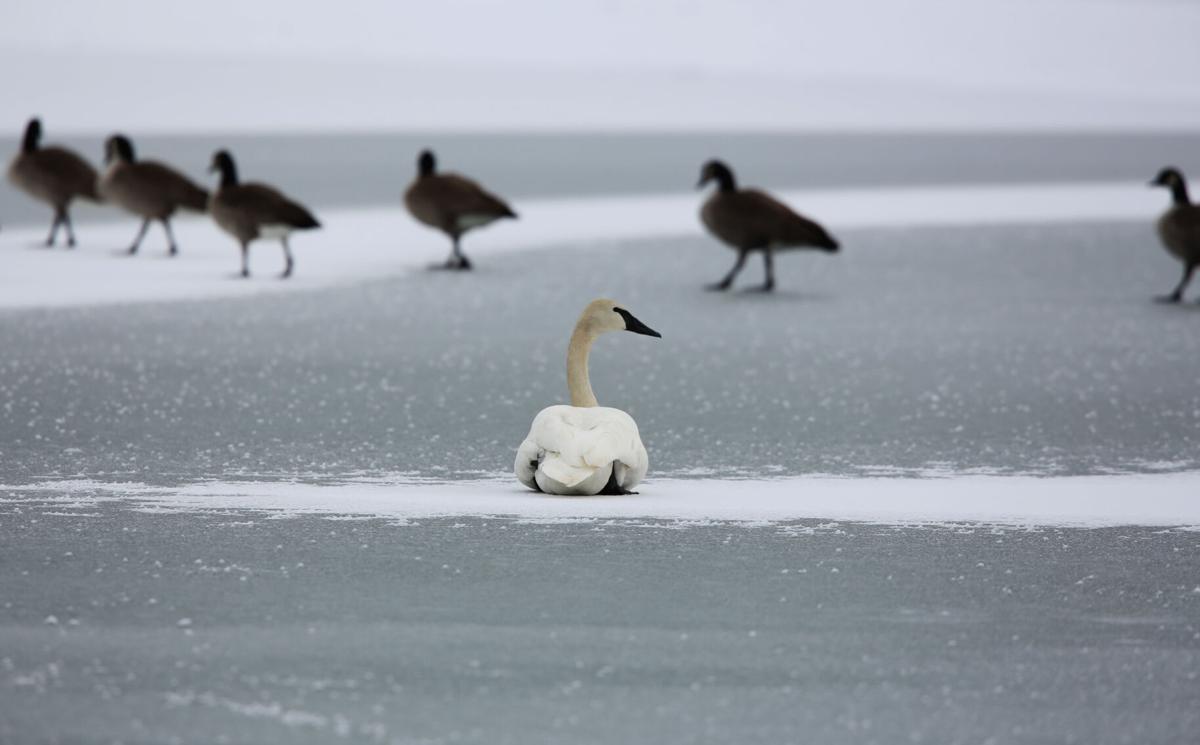 Eloise, a trumpeter swan, sits on a frozen pond without her mate, Pete, who died Saturday at Aspen Lakes. 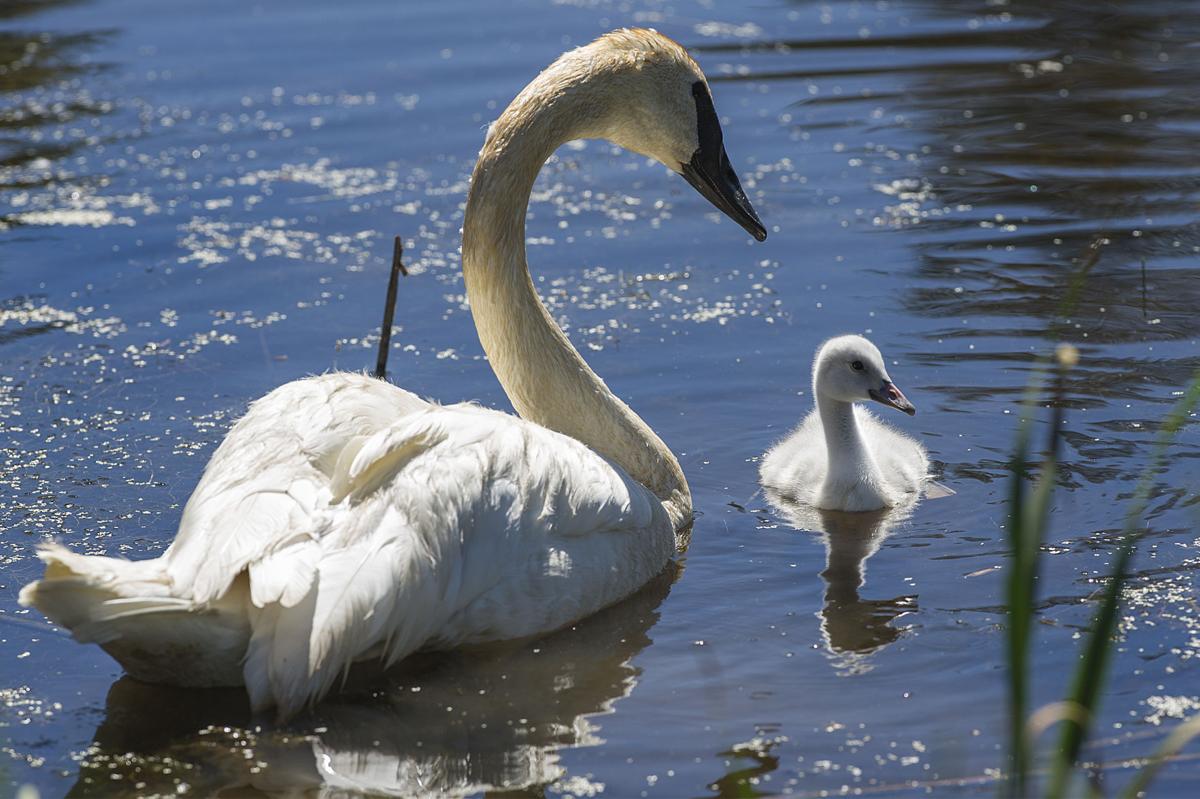 In this 2018 file photo, Pete, a male swan donated to the Aspen Lakes Golf Course to enhance Oregon’s trumpeter swan breeding program, swims with his cygnet Sydney on a small pond at the golf course in Sisters. Pete died Saturday.

Eloise, a trumpeter swan, sits on a frozen pond without her mate, Pete, who died Saturday at Aspen Lakes.

In this 2018 file photo, Pete, a male swan donated to the Aspen Lakes Golf Course to enhance Oregon’s trumpeter swan breeding program, swims with his cygnet Sydney on a small pond at the golf course in Sisters. Pete died Saturday.

The most prolific trumpeter swan pair in Oregon’s breeding program experienced a tragic turn of events Saturday when the male, Pete, died from a bacterial infection.

Pete and his mate, Eloise, produced 15 young in the past three years from their home at the Aspen Lakes Golf Course in Sisters. The pair was a boost to the state’s effort to repopulate the threatened species.

Eloise is now the second swan in Central Oregon to lose a mate in recent months, after Gracie, the resident swan at Sunriver Nature Center, was killed in October, leaving her mate, Gus.

Wildlife officials relied on the two pairs to produce young in the protected environments at the golf course and at the nature center. The babies, or cygnets, were then sent to live in the wild at the Summer Lake Wildlife Area, a 19,000-acre wetland in central Lake County that is ideal wetlands for swans.

If the two remaining swans do not find new mates this spring, officials worry it could be a disappointing breeding season.

“We have to live with the cards we are dealt, but it would be nice to have a couple broods,” said Gary Ivey, of Bend, a past president of the Trumpeter Swan Society and former biologist at Malheur National Wildlife Refuge.

Ivey said the good news is the nature center and golf course are working to find new mates. In addition, more wild pairs appear to be breeding, which is the state’s ultimate goal, he said.

The state breeding program is trying to increase the population, which is at about 35 swans. Eventually, more swans in Oregon could connect with swans in other Western states and help increase the region’s population. So far, fewer than 1,000 swans are in the western United States, Ivey said.

The species was at near-extinction at the turn of the 20th century, when none were found in Oregon due to over hunting. The population has since slowly recovered.

Having more wild pairs would take the pressure off the nature center and golf course, but Ivey hopes the two locations are still able to rejoin the breeding program.

Robin Gold, a wildlife rehabilitation expert who lives in the Aspen Lakes neighborhood and cared for Pete and Eloise, said the Sisters neighborhood has rallied together to find a replacement for Pete.

Aspen Lakes resident Bob Landwehr volunteered to fly to North Carolina, where a breeder is willing to donate a male swan. It is the same breeder who sent Pete to the golf course three years ago.

The new swan, who will be named Bob to honor Landwehr, is expected to arrive next week, Gold said.

“When Pete was introduced to Eloise, it was so magical,” Gold said. “I’m hoping we have a similar response with this one.”

Gold said the Aspen Lakes community had grown close to Pete and Eloise and were devastated when they heard about Pete’s death.

Last week, Pete was taken to a veterinarian for a possible broken leg. A blood test showed it was a bacterial infection in his joints.

The diagnosis is not unusual among swans, and it is often fatal, Gold said.

Although Pete had to be euthanized, Gold is encouraged that Eloise won’t be lonely for too long.

“This is about as good an outcome as there could be to a very sad story,” Gold said. “It certainly heartens me to see a community unite and give so much of themselves.”