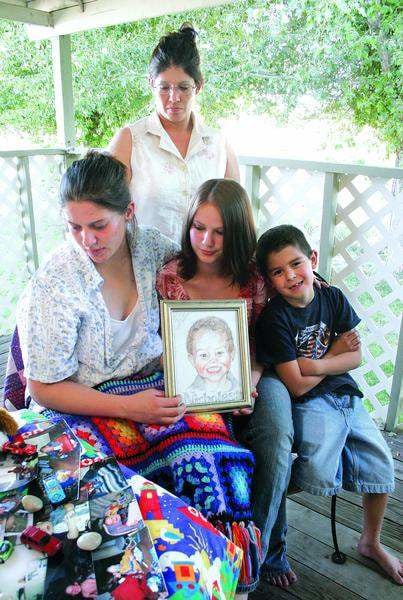 Nicholas Muldrow's mother, Jeanna Matson, left, looks at a table of photos and memorabilia she and her family compiled in his memory with her mother, Shannon Scarlett, standing, and her two children, Mika and Alex Matson, at Scarlett's Metolius home. 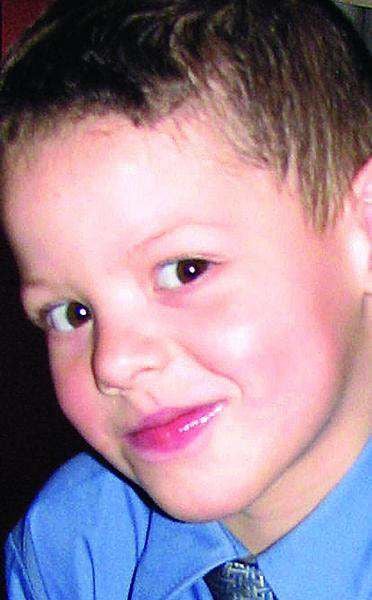 Nicholas Muldrow's mother, Jeanna Matson, left, looks at a table of photos and memorabilia she and her family compiled in his memory with her mother, Shannon Scarlett, standing, and her two children, Mika and Alex Matson, at Scarlett's Metolius home.

METOLIUS - Jeanna Matson said she went from having a family of three to being all by herself Monday when her husband was arrested and later charged with murdering her 4-year-old son.

Donnie Earl Asher, 26, also has been charged with manslaughter in connection with the beating death of his stepson, Nicholas Muldrow - Matson's only child.

Matson, 21, was living in a hotel while looking for a house in Prineville with her husband of five months.

She said she left her son with Asher while she worked her swing shift at an elder-care facility Monday.

The next time she saw Nicholas was Monday evening, and she said he was nearly unrecognizable because of swelling and bruising to his face and head.

He died from the injuries Wednesday, and police say Asher is responsible.

Matson's family gathered on the front porch of her mother's Metolius home Thursday.

They pored over photos and share stories of a little boy with boundless energy.

”Nicholas' feet are hardly ever on the ground,” said Shannon Scarlett, Nicholas' grandmother. ”He is either jumping or running, and if he is sitting, he's spinning.”

She said the boy was famous for doing backflips from the branch of a plum tree in her front yard.

Matson said her son walked when he was 9 months old and took the training wheels off his bike when he was 3.

”That bike was his life,” Matson said. ”He would go out and ask everyone in the neighborhood to ride bikes with him, and once he took off, there would be 15 other kids behind him.”

He sang constantly, played air guitar and made up a language he spoke with his 7-year-old uncle, Alex Matson.

Nicholas adored Alex, Matson said, and wanted to do everything just like his uncle.

Nicholas tried to comb his curly locks straight to look more like Alex.

He followed his uncle around like a shadow and wanted to play with his toys.

Scarlett said her grandson adored going to Sunday church services, where he could listen to Christian music and stories told by the children's pastor.

Matson said that she never had a problem keeping Nicholas in line and that Asher spanked her son in a way that bothered her.

She said a swat on the fanny was effective with the boy, but Asher would spank Nicholas five or six times when disciplining him.

”They did have a good relationship until it came to the discipline,” she said. ”Now that I think about it, I think (Nicholas) acted so sweet around Donnie because he was intimidated. He was afraid to do things when he was around Donnie.”

Matson said her husband struggled with alcohol abuse, but she never felt concerned for her child's safety until Monday.

She said the last time she saw Nicholas conscious was when Asher dropped her off at work at 2 p.m.

”The child sustained traumatic injuries,” said Capt. Michael Boyd, of the Prineville Police Department ”There were obvious signs of trauma on various parts of his body and head.”

Asher was arrested on an assault charge Monday, according to Crook County District Attorney Gary Williams, but that charge was dismissed when Nicholas died.

A grand jury indicted Asher on the two counts Thursday, and it is unclear if additional charges are warranted, Williams said.

”The investigation is just beginning,” he said. ”The case is only three days old, so I can't tell you if more charges will be filed or not.”

He said Asher was held without bail at the Crook County jail and is scheduled to be arraigned this morning.

In 2005, 18 children died in Oregon as the result of abuse or neglect, DHS numbers show, and 4.5 percent of all abusers were stepfathers.

Drug and alcohol use are listed on the Web site as stress factors that contribute to child abuse.

Bob Smit, executive director of the KIDS Center in Bend, said frustrated parents often do not realize how their actions impact children.

”The physical power of an adult is so much stronger than a child,” Smit said. ”Adults need to recognize when they are escalating and give themselves a time-out. They need to learn what triggers their anger and frustration and what causes them to act in a way that's not healthy for their child or themselves.”

Smit estimated that about 2,500 cases of child abuse occur in the tri-county area each year.