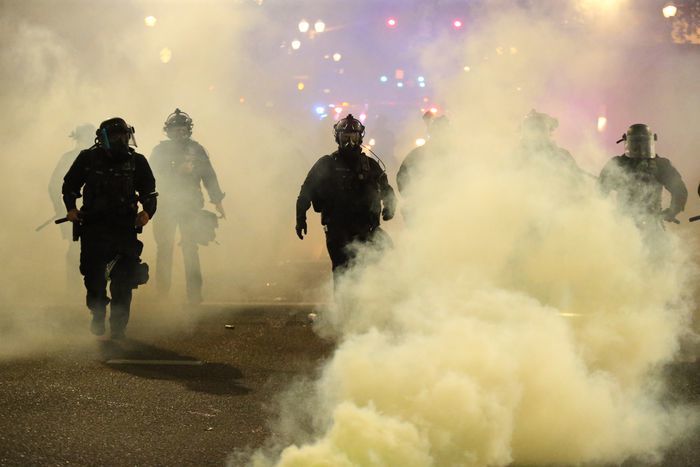 After hours of largely peaceful demonstrations, violence escalated late Friday in downtown Portland, as hundreds of people gathered to protest the Minneapolis police killing of 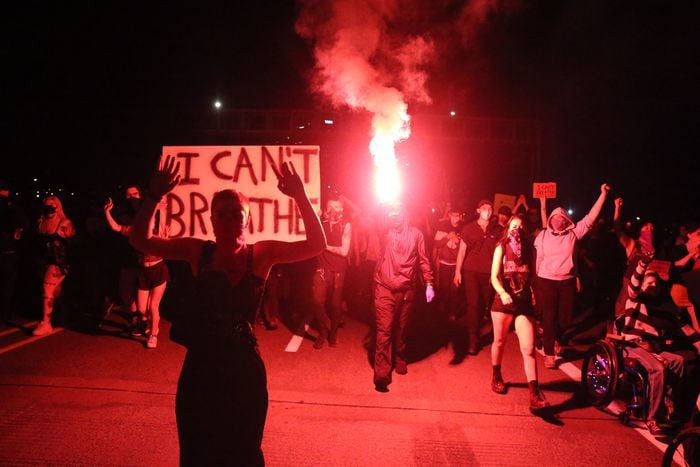 After hours of largely peaceful demonstrations, violence escalated late Friday in downtown Portland, as hundreds of people gathered to protest the Minneapolis police killing of

Portland Mayor Ted Wheeler declared a state of emergency in the city Saturday after a night of destructive protests over the death of George Floyd, a black man who was killed by police in Minneapolis.

Several businesses were looted, protesters set cars on fire and the Multnomah County Justice Center in downtown Portland was ransacked.

“Demonstrators have gathered in many cities to protest Mr. Floyd’s death. Peaceful demonstrations are essential to our democratic system,” Wheeler wrote in the declaration.

“Unfortunately, some individuals have engaged in unlawful and dangerous activity, including arson, rioting, looting, and damaging public and private property.”

The mayor imposed a curfew in Portland from 8 p.m. Saturday to 6 a.m. Sunday, prohibiting all residents from traveling on “any public street or in any public place.” There were exemptions for those traveling to or from work, seeking help in an emergency or those experiencing homelessness. People found to be violating the curfew could face fines of up to $500.

Saturday night’s protest turnout already appeared to reach at least a thousand by 7 p.m. Portland Police tweeted a final warning about 15 minutes before the curfew took effect and, already, the arrests had begun.

Protests began in Minnesota after Floyd was killed on Monday, and by Friday demonstrations had spread to more than a dozen cities across the nation with many turning violent. Farther up Interstate 5, in Seattle, thousands of people gathered downtown, where a largely peaceful gathering turned rowdier Saturday afternoon, with police deploying flash bangs to disperse crowds. Protesters spilled onto I-5, forcing the freeway’s closure through the central part of the Northwest’s largest city.

In Portland, protesters gathered around 6 p.m. Friday for a vigil in a park on the north side, and later many marched toward downtown as police kept their distance from the rally. The vigil and march were organized by activist network Pacific Northwest Youth Liberation Front. Some members of the group have been holding constant vigil outside the Justice Center. But the situation escalated as protesters moved south. Just before 10 p.m., a large group had gathered at the intersection of NE Seventh Avenue and Morris Street and a passenger in a vehicle within the crowd was shot, police said. The victim went to a nearby hospital where he was treated and released. An Oregonian photographer saw a man on a skateboard hit by a car after the car drove toward marchers near the intersection of NE Shaver Street and Martin Luther King Jr. Boulevard around the same time, but it was unclear if the two incidents were related. The pedestrian who was hit walked away from the collision, and the car drove away.

Protesters eventually congregated at the Multnomah County Justice Center, which houses the downtown jail and police precinct. People smashed windows and lit fires inside a first-floor office while corrections records staff were working inside, according to Chris Liedle, a Multnomah County Sheriff’s Office spokesperson. Workers were able to leave unharmed and the building’s sprinklers doused the flames, he said.

Police declared the gathering an unlawful assembly and attempted to disperse the crown with stun grenades, pepper balls and tear gas.

Protesters fanned out across downtown and some businesses, including the Apple store and stores in the Pioneer Place Mall, were looted. Around downtown, some cars were set aflame.

Two officers were injured, police said. One was struck in the head with a rock and another was hit with an “incendiary device.” Officials did not say the extent of their injuries.

“We know what sparked the original demonstration and we provided space for those who needed to express grief,” said Acting Police Chief Chris Davis. “The mass destruction we saw tonight in our City is unacceptable. Anger at the police is one thing; destroying our City is another.”

Wheeler said in a tweet he was returning to Portland from a trip he’d taken to be with his ailing mother. During an interview with KGW around 12:30 a.m. Saturday, Wheeler decried the destruction.

“What’s going on right now is flat out breaking the law, violating our community, violating the memory of George Floyd and so many other people on such an important night,” Wheeler said.

Jo Ann Hardesty, an African American member of the City Council, said those responsible for the looting and burning were a small group of people who took the opportunity of earlier peaceful protests — that police had largely stayed away from — “to steal stuff and break stuff.”

The People of Color Caucus of the Oregon Legislature called the rioters opportunists and outliers who were disregarding the leadership of black community organizers. At one point, black community members placed themselves between a business and vandals to protect it from being destroyed, they said.

In Seattle, the mayor announced a 5 p.m. curfew for downtown. The Washington State Patrol closed both directions of I-5.