Attendees at a community meeting in Grant County vote no to pursuing a Project Turnkey grant to turn a hotel intro transitional housing. 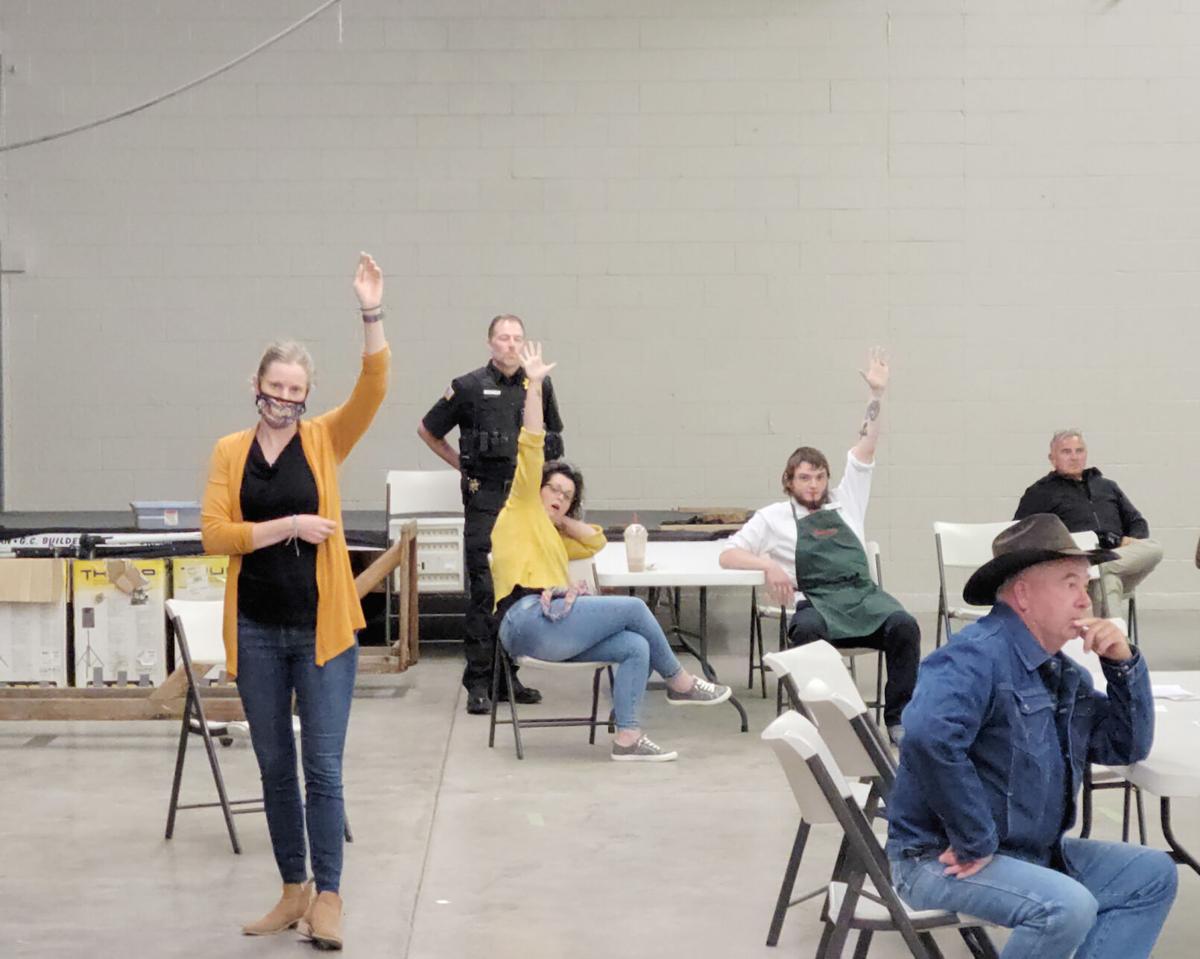 Community members raise their hands for a “yes” vote for Project Turnkey on Wednesday in the Trowbridge Pavilion of the Grant County Fairgrounds.

Attendees at a community meeting in Grant County vote no to pursuing a Project Turnkey grant to turn a hotel intro transitional housing.

Community members raise their hands for a “yes” vote for Project Turnkey on Wednesday in the Trowbridge Pavilion of the Grant County Fairgrounds.

Organizers in Grant County abandoned the idea to buy and convert a hotel into transitional housing Thursday.

County officials applied for a Project Turnkey grant, a statewide program that converts motels and hotels to permanent transitional or emergency housing, but according to a Thursday news release, they are not going to accept funding to purchase Dreamers Lodge for transitional housing. The housing was intended for people impacted by wildfires, COVID-19 and those released from incarceration as they enter back into society.

“After careful consideration and listening to the sentiment of Grant County residents, the Project Turnkey Steering Committee has decided not to accept the funding to purchase Dreamers Lodge for transitional housing,” the news release said.

After an emotional — and at times hostile — public meeting Wednesday in the Trowbridge Pavilion at the Grant County Fairgrounds, those in attendance voted down the project 75-50.The plan

Community Counseling Solutions CEO Kimberly Lindsay told the audience that the Oregon Community Foundation would provide $1.8 million to purchase the Dreamers Lodge hotel in John Day. Additionally, she said, the grant would provide $110,000 for startup operations, $39,000 for renovations and $36,000 for deferred maintenance.The Oregon Legislature allocated a total of $65 million for Project Turnkey for the purpose of acquiring motels or hotels for use as shelter for people experiencing homelessness or at risk of homelessness in November.

The city of Bend has been trying to find a suitable location for housing with funding help from Project Turnkey.

Two discrete funds were provided by the state: one totaling $30 million to be awarded in counties and tribal communities impacted by the 2020 wildfires and one totaling $35 million for the remaining 28 counties in the state.

Rhiannon Bauman with Families First said the target population would be Grant County residents on parole or probation, or those who lost their jobs due to the pandemic. In addition, there are homeless veterans coming out of drug and alcohol treatment, she said.The needBauman said the community lost 43 homes during the 2015 Canyon Creek Fire.

”Think of how amazing transitional housing would have been for those people,” she said.

Bauman said 45% of Grant County residents live below the poverty line, and from 2019 to 2020, the county saw a 30% increase in people going into residential alcohol or drug treatment.

She people returning to the county have no housing or support when they get out of residential treatment.

Grant County Sheriff Todd McKinley, who before being elected in November served as the county’s probation office director, told the audience Wednesday that there’s been a need for transitional housing in the county for a long time.

He said the community expects people coming out of prison to succeed, but society does not give them the tools to do so.

”I hear a large consensus being said, ‘Well, just let them live under a bridge,’” he said. “Than I get these phone calls to come deal with this guy under the bridge because they are tired of him being in this area.”

He told the audience that it is a “catch 22” because people who get released from prison come back to where they committed their crime. McKinley said last year Grant County released 12 people from prison and institution settings into the community.

An audience member heckled McKinley and told him that was a lie. He said people he spoke to in north Salem, where similar projects were started, told him not all criminals go back to the places where they had committed their crimes. He said they go back to where they are comfortable. McKinley told him that was not “how it works.” Other members asked him why. McKinley told them that is what the law requires.

”They have to be here,” he said. “That’s a requirement of their parole.”

Community Counseling Solutions Substance Abuse Prevention Coordinator Lisa Wiegum said local government did not spearhead the project at the start of Wednesday’s meeting.Transparency and timelinesOne point of criticism the organizers faced Wednesday was a lack of transparency about the project. Many in the audience asked why they were just hearing about the plans within the last month.

Megan Loeb, program officer for the Oregon Community Foundation, said part of the reason why the timeline was so rushed was because of the urgency of need for shelter and housing through this pandemic. She noted that nearly half of the shelter beds in the state are “congregate models,” typically church halls that are usually staffed by volunteers.

Nate Conklin, an outreach specialist with the Fletcher Group, said during a May 12 County Court session that McManus and Bauman first spoke about the need for recovery housing in October. He said the group met with a grant coordinator in January, formed a steering committee in March and received preliminary approval for the project in late April.

He told the court that on April 23 the steering committee held a business owners informational meeting and said the feedback was “overwhelmingly positive.”

However, Heather Swick told the project organizers that other businesses, such as Mosier’s Furniture across the street from Dreamers Lodge, were not informed of the project.

”You’re not informing people,” she said. “You’re not keeping people informed. That is wrong. Absolutely wrong. And shame on every one of you.”

Weigum said the deadline to sign the documents for the grant would be June 15.