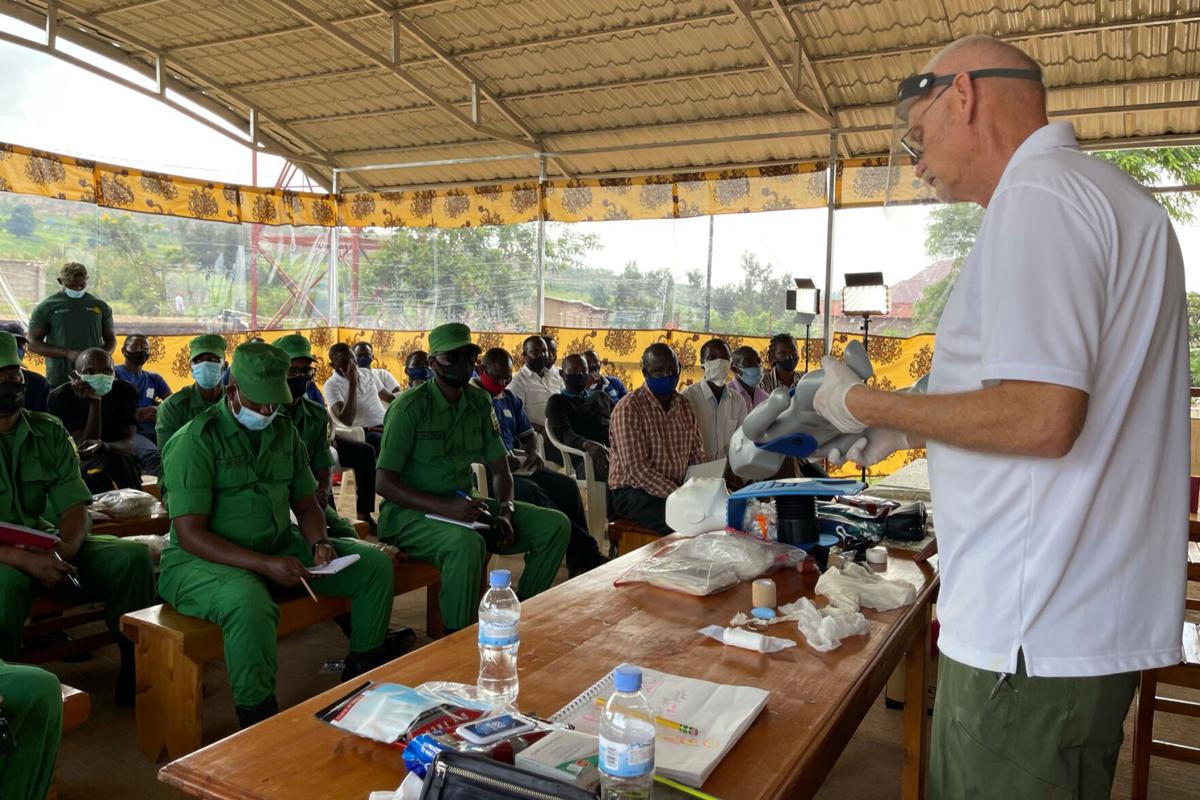 Lou Gerber teaches a CPR and first aid class in December 2020 at Nibakure Community Village in Rwanda. Gerber served as a combat medic in Iraq with the National Guard in 2003 and 2004. 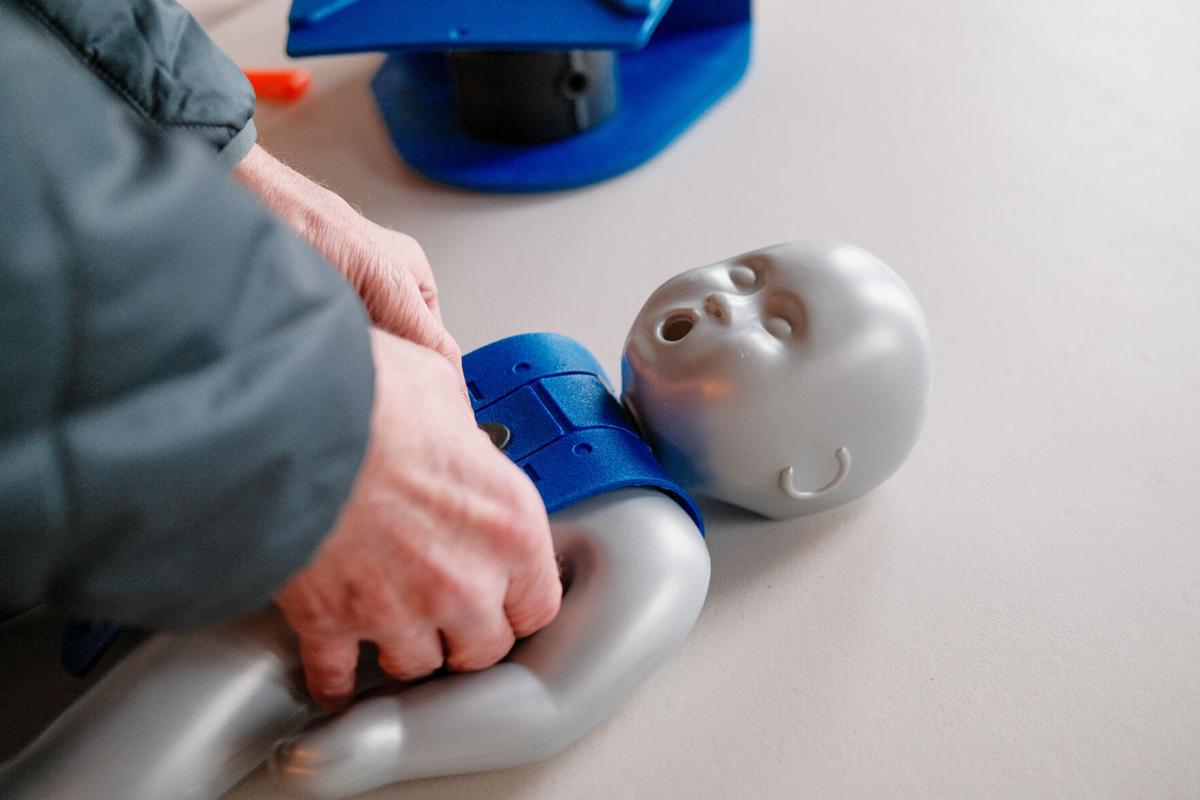 Lou Gerber demonstrates how to administer CPR with his set of ACTAR training dummies. Gerber has kept the set for nearly 40 years and has used them to train others in CPR.

Rwanda is a medical paradox.

The east African nation of 13.1 million has one of the lowest COVID-19 death rates in the world yet the availability of basic medical equipment is limited.

Lou Gerber of La Grande understands this well. The retired Oregon National Guardsman, who served as a medic in Iraq in 2003 and 2004, returned after a two-week trip in December 2020 to Rwanda with his son Matt, who grew up in La Grande but now lives in Dallas, Texas.

Lou Gerber gained a firsthand glimpse of Rwanda’s medical system while teaching a CPR and first aid class to 38 first responders and providing them with donated medical supplies. Gerber was jolted to find many medical professionals in Rwanda have no stethoscopes, blood pressure cuffs or pulse oximeters, which measure blood oxygen levels.

“Nurses did not have these,” Gerber said. “It was very surprising.”

On the other end of the medical spectrum, Gerber said Rwanda’s government is diligent in its efforts to limit the spread of COVID-19.

“It is very meticulous about protecting the population,” Gerber said.

Gerber’s son agreed, explaining that people must wear masks at almost all times, even when in vehicles.

“You will get pulled over if everyone is not wearing a mask,” Matt Gerber said.

Rwandans also are screened for COVID-19 many times a day.

“Every time you walk into a bank, a grocery store or a hotel your temperature is taken,” Matt Gerber said.

There also are many random checks. Lou Gerber noted he once saw people in a car stopped at a red light having their temperatures checked.

“We had to be tested in the United States five days before we left (for Rwanda) and after we arrived we were quarantined for 24 hours,” Matt Gerber said.

This diligence is likely why Rwanda has been ranked first in Africa and sixth globally in managing the COVID-19 pandemic, according to a 2021 story in Africannews.com, which cites rankings made by the Lowy Institute of Australia.

Rwanda is lauded for its COVID-19 prevention efforts but not the state of its economy.

The nation has a dearth of fundamental medical supplies as a result. Often, Matt Gerber said, Rwandans lack basics, such as bandages.

He said his father was inspired to teach Rwandans how, in the absence of bandages, to cut sheets that can be used to stop bleeding.

To help address this shortage, the Gerbers brought a large assortment of first aid supplies, many donated by people in Union County. The supplies were collected and organized with major help from Lou Gerber’s wife, Robin.

“She rallied the community to give donations, which made this a successful venture,” said her son Matt.

The CPR and first aid class Lou Gerber taught was in an open air classroom with first responders who handle all types of emergencies, including fires, crime and natural disasters.

Lou Gerber, an EMT, made his presentation with the aid of an interpreter who translated his words into Kinyarwanda, Rwanda’s national language. Early in his three-hour presentation, the interpreter tapped Gerber on the shoulder.

“She asked me to slow down so that she could catch up to me. When I’m talking about something I’m excited about I start talking too quickly,” Gerber said”t

Matt Gerber said his father’s talk was given in a hot, uncomfortable outdoor setting. Despite this, he said the first responders listened intently throughout.

“These people were so excited,” he said. “They were on the edge of their seats.”

Sadly, Rwanda is best known to many throughout the world for its horrific civil war of 1994, which was triggered by long-running disputes between the Hutu and Tutsi tribes. The four-month war claimed the lives of hundreds of thousands of Rwandans. Rwanda is moving past the war but it still healing, said Matt Gerber, who has made a number of service trips to the nation in recent years.

“It has been rebuilding for the last 26 years,” he said.

At the heart of its recovery effort has been the elimination of the tribal affiliations in Rwanda. He said today references to tribes are rarely heard in Rwanda.

Gerber and his father reflected on the 1994 civil war during a visit to the Nyamata Genocide Memorial in Rwanda. The memorial is a former church where 10,000 people locked themselves inside for safety but were killed by attackers. The remains of about 40,000 people killed in the area attack are buried at the site and the interior of the old church has skulls and clothing of the many who died.

“It is a very solemn place,” said Matt Gerber.

Ariella Lorenzen, a filmmaker from Sweden, accompanied the Gerbers on their journey. Lorenzen captured images of some of the work of the father and son team. The party’s stops included a two-day, one-night visit to Akagera National Park. The park is a former cattle ranch now home to African wildlife, including hippopotamuses, zebras and elephants.

The party traveled in a vehicle during an unforgettable two days.

“It was the intensity of being in the wild, the thrill of the unexpected. You might see 50 baboon around one corner and a herd of elephants the next,” Matt Gerber said.

The presence of hippopotamuses had the trio on alert.

“Hippopotamuses kill more people than lions do,” Matt Gerber said. “Even when they are not violent they can crush you by walking over your tent.”

To protect themselves from such threats, they spent their night at the park in a solar-powered treehouse that had overnight accommodations.

Matt Gerber, a corporate social responsibility strategist, also spent a portion of his time in Rwanda helping to develop a vocational development program for individuals who want to become seamstresses. He donated two sewing machines and a large amount of sewing items to help get this program started.

The trip to Rwanda was the first for Lou Gerber and the sixth for Matt in the past seven years. Matt Gerber said he hopes he and his father can make similar trips in the future.

“I hope we can start making service trips somewhere in the world every year,” he said.