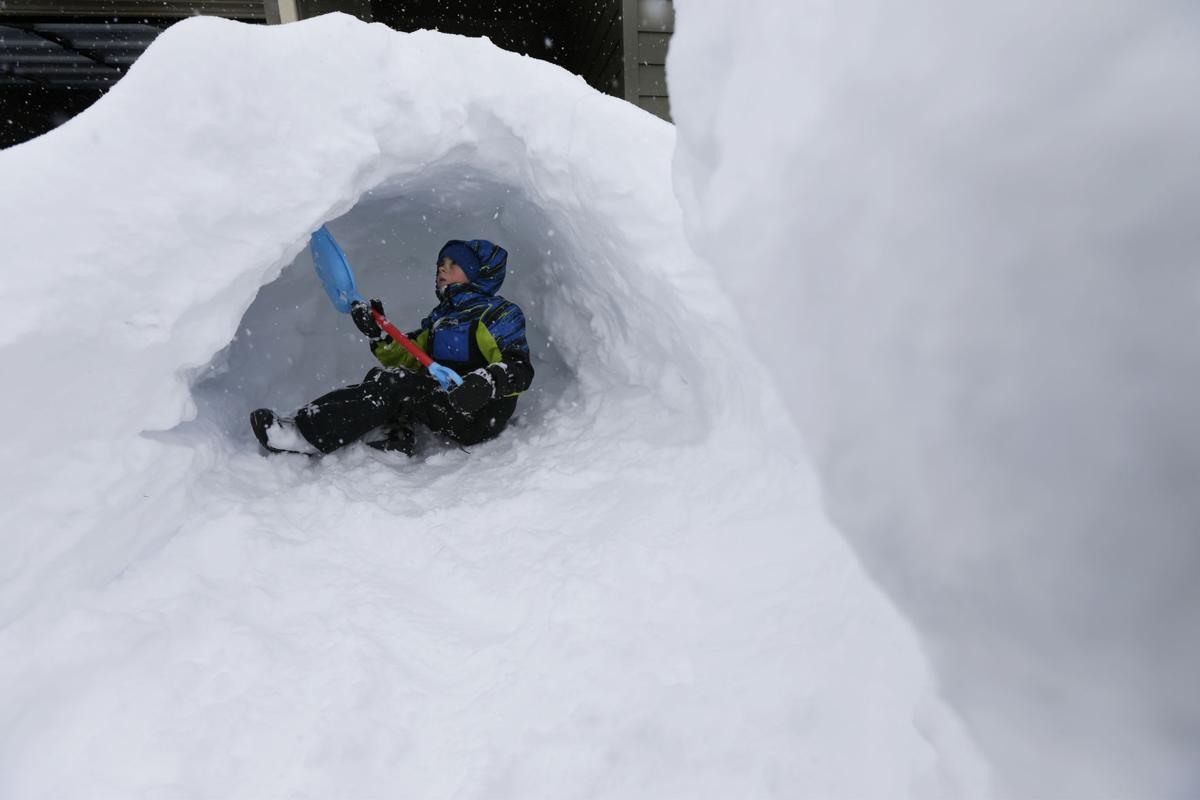 (Ryan Brennecke/Bulletin photo)PICTURED ABOVE: Cole Ruff, 7, digs a snow fort after his father shoveled their driveway Monday. BELOW: A group of friends celebrates a snow day off while on their way to McMenamins’ soaking pool after skiing through Drake Park. BOTTOM: Snow keeps falling as Mark Williams works to remove it from the top of his trailer. 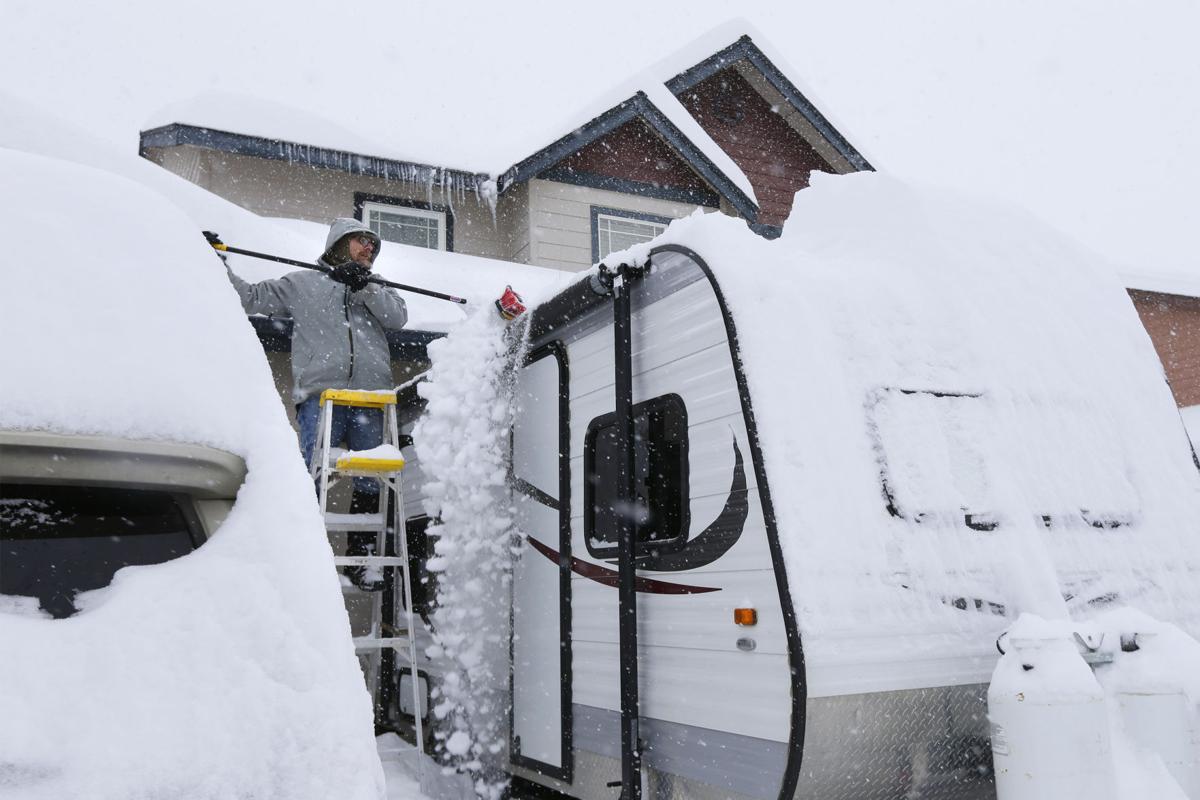 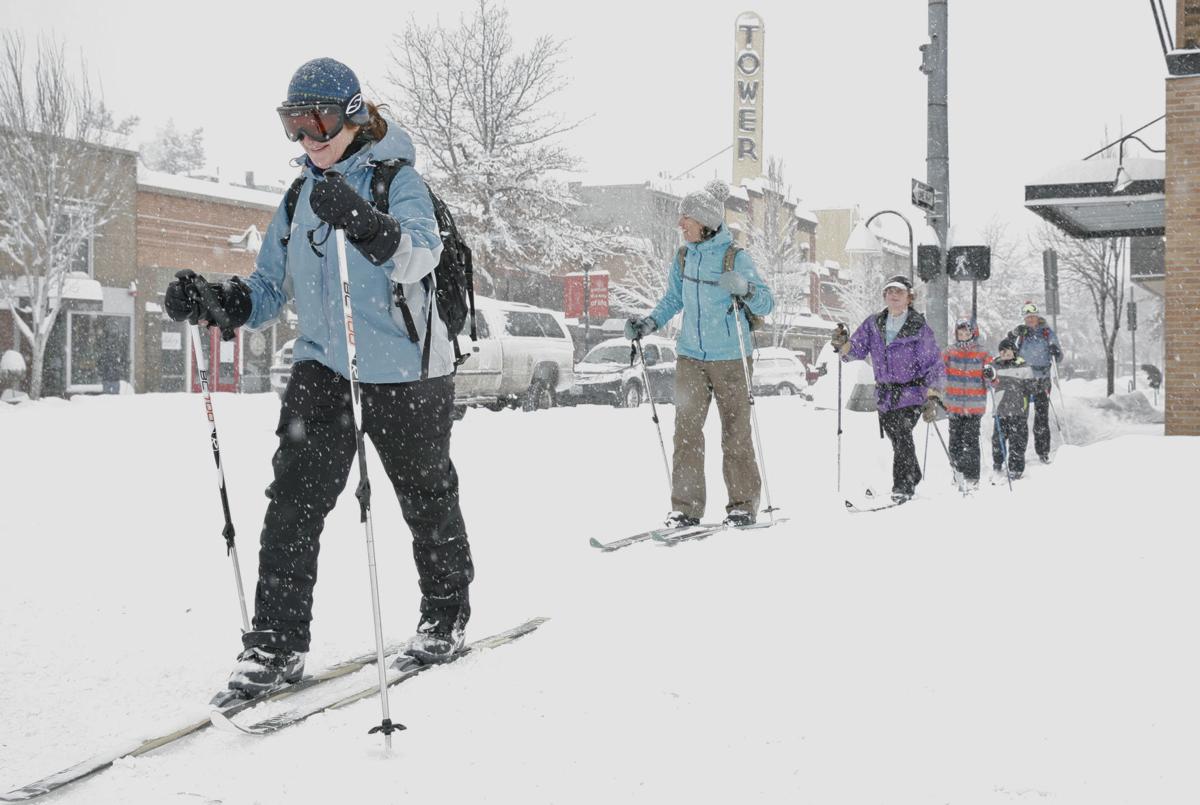 (Ryan Brennecke/Bulletin photo)PICTURED ABOVE: Cole Ruff, 7, digs a snow fort after his father shoveled their driveway Monday. BELOW: A group of friends celebrates a snow day off while on their way to McMenamins’ soaking pool after skiing through Drake Park. BOTTOM: Snow keeps falling as Mark Williams works to remove it from the top of his trailer.

Schools, government offices and the Redmond Airport all closed Monday as more than a foot of snow blanketed Bend in the biggest February snowstorm to hit Central Oregon in at least 118 years.

Between 13 and 16 inches of snow had fallen on Bend by midday, with close to 20 inches near La Pine, said Marc Austin, a meteorologist with the National Weather Service in Pendleton. More snow continued to fall throughout the day but began to taper off late in the afternoon.

“Conditions are still going to stay pretty nasty even though it might not be snowing,” Austin said.

Some residents in Bend were reporting snow depths of up to 20 inches by the end of the day Monday.

Forecasters expect Tuesday to be calmer, but a new storm will come in Wednesday; 3 to 6 additional inches of snow are expected to fall on Bend this week, most of it Wednesday and Thursday.

“We have more snow on the way, unfortunately,” Austin said.

The snowstorm grounded flights at the Redmond Airport, which closed its airfield Monday morning and expected to keep it closed through noon Tuesday. The rate of snowfall affected electronic equipment needed to safely use the airfield and runway conditions were too slick.

U.S. Highway 20 closed early Monday morning because of an avalanche about 2 miles west of Santiam Pass. The avalanche was cleared and the highway reopened at 7 p.m.

The Oregon Department of Transportation was reporting multiple crashes and on-ramp closures on U.S. Highway 97 in and around Bend.

The city of Bend closed its offices for the day, but police, fire and road crews kept working. The city, along with government agencies throughout the region, urged residents to stay home if they could.

Bend spokeswoman Anne Aurand said she was one of three or four city employees who made it into City Hall by midday Monday. The city expects to resume other services Tuesday.

Tuesday also could bring a declaration of an emergency snow zone on some busy narrow streets including parts of NW Wall, Bond, Broadway and 17th streets; Tumalo, Chandler, Troon and Conners avenues; and Courtney Drive. If the city does declare a winter parking emergency, cars parked on those streets could be towed.

Bend’s city road crews switched their working schedules to two 12-hour shifts, meaning 16 employees and the city’s 16 pieces of plowing and sanding equipment could be on the road 24 hours a day. Private contractors called in by the city to focus on residential areas have an additional 18 vehicles.

Bend has fewer pieces of snow equipment than many similarly sized cities on the East Coast or in the Midwest because it typically gets fewer heavy storm days than those cities.

It takes about 24 to 36 hours to plow all 850 miles of travel lanes in Bend, said David Abbas, the director of the city’s streets and operations department. City employees focus first on main roads, then on collecting roads. A map of all roads and their priority level is available on the city’s website.

Snow continuing to fall throughout the day Monday made plowing difficult, Abbas said. Contractors started work on residential streets around 5 a.m. and city employees had cleared most top priority streets early in the morning but had to redo them, he said.

“We clear them and then a couple hours later they need cleared again the way the snow’s been today,” Abbas said.

Road crews are not clearing sidewalks, which are the responsibility of the adjacent property owner. Commercial owners are expected to clear sidewalks within six hours and residential property owners within 24 hours.

The city urged residents to clear space around nearby fire hydrants as quickly as possible. Otherwise, Aurand and Abbas urged patience.

“Be safe and be patient,” Abbas said. “Everything we’ve got, we’ve got thrown at it.”

Monday was the Oregon School Activities Association’s first designated day of spring sports practices, but school and all after-school activities were canceled in Central Oregon. All classes were canceled at Oregon State University-Cascades and at Central Oregon Community College campuses in Bend, Redmond, Madras and Prineville.

Meals on Wheels, which delivers meals to about 90 homebound seniors in Bend, did not deliver Monday and will not deliver Tuesday. The organization asked clients to use the boxes of five nonperishable emergency meals they received in the fall.