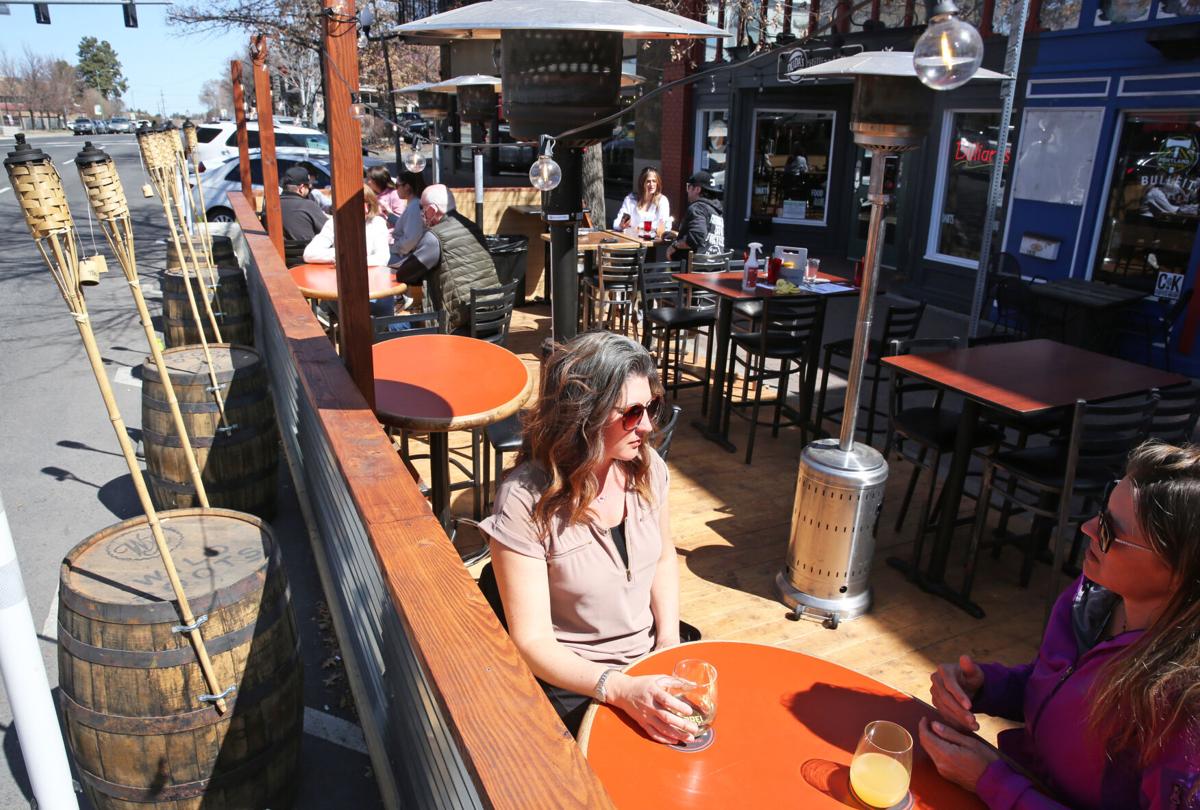 Becky Seim, left, and Kelly Johnson, both of Bend, sit in an outdoor dining area called a parklet at Sidelines Sports Bar and Grill on NW Wall Street in Bend. 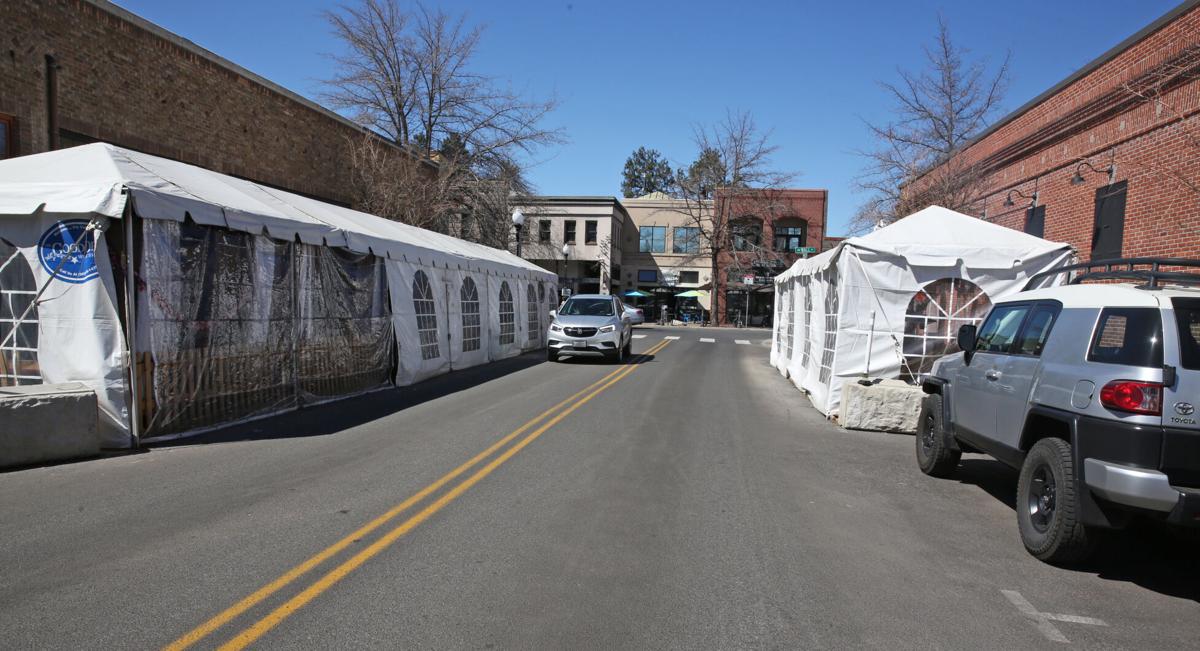 Becky Seim, left, and Kelly Johnson, both of Bend, sit in an outdoor dining area called a parklet at Sidelines Sports Bar and Grill on NW Wall Street in Bend.

Being able to set up outdoor seating in parking spaces in downtown Bend began a positive ripple effect at Deschutes Brewery.

When the city of Bend developed its “parklet” program last summer to help businesses with COVID-19 capacity restrictions stay afloat, Deschutes Brewery was able to add seven tables, which seat six people each, in front of the restaurant where cars normally park on Bond Street, said Tim Casinelli, general manager of the brewery’s downtown restaurant.

Those seven tables allowed him to expand the restaurant’s capacity by 50%, which in turn meant the business was able to employ two more people that otherwise wouldn’t have had jobs.

“It’s been very impactful,” Casinelli said. “It’s been able to help keep us doing what we like to do.”

Now, nearly a year after the program began, the city is considering extending the pilot parklet program — which was initially designed not to be permanent, but to help businesses through the pandemic — for the next year. Parklets are like sidewalk extensions that are built out into parking lanes or spaces to provide people with more space and amenities, like outdoor dining.

The Bend City Council will discuss the idea of extending the parklet program at its meeting at 5 p.m. Wednesday, April 7.

The parklet concept has received lots of support from the businesses that use the program, and even positive feedback from other businesses that don’t use parklets but like what they add to the character of downtown, said Ben Hemson, the city’s business advocate.

A recent survey found that six of the eight businesses that are permitted to have parklets would be interested in having them in the future. The survey also found that restaurants with parklets gained between 30% and 75% of all their revenue specifically from parklet dining, Hemson said.

“This (survey) was to figure out ‘Hey, do we need to continue this?,’” Hemson said. “The answer was a resounding ‘yes.’”

If the longer pilot is successful, Hemson said the goal would be to move toward making the parklets a standalone program within the city, with clear, set guidelines about what they should look like.

Hemson noted that in other cities that had city parklets before COVID-19 hit, they usually look more permanent and intentional, and “aren’t surrounded by concrete barriers” like the ones currently in downtown Bend.

Other rules, like how many would be permitted in a given number of downtown parking spaces and what times of year they would be able to operate, would also be discussed, he said.

But the parklets have drawn criticism from some business owners downtown, Hemson said. The main concern is that the parklets reduce the amount of available parking spaces downtown, which could impact other businesses.

The parklets have less impact on parking than one may think, said Tobias Marx, the city’s parking manager. In the past year, which Marx recognizes is atypical since the pandemic has reduced the number of people coming to work and shop downtown, parking in the core part of town reaches between 60 and 70% capacity. On the weekends, it peaks at 80%, he said.

For perspective, in the first two months of 2020 before the pandemic hit, parking in the core of downtown regularly reached 92% to 96% capacity.

Because there are more people working remotely, the parking garage is only at 50% capacity, Marx said.

“We still currently have plenty of parking available,” Marx said.

Marx said it was important to note that his department is proposing the council limit the amount of parking spaces that could be used for parklets to 5% of the on-street parking inventory, which would be 90 spaces out of 1,800.

“The biggest thing is that we are not proposing a free -for -all,” Marx said.

Marx said he still does not have parking concerns with the parklets, even when Bend’s parking situation eventually returns to pre-pandemic levels.

The challenge is shifting driving culture away from expecting to be able to park right in front of your destination, and instead expecting to park around the corner or farther away where there is parking available, Marx said.

“There is plenty of parking available if you are willing to go there,” Marx said.

Casinelli, of Deschutes Brewery, said he has yet to receive a complaint from a patron who has been unable to park right in front of the restaurant, despite the fact the parklet takes up nine parking spots.

In fact, he believes the parklets bring more people to downtown, which helps all businesses in the area.

“We’re all in this together,” Casinelli said.