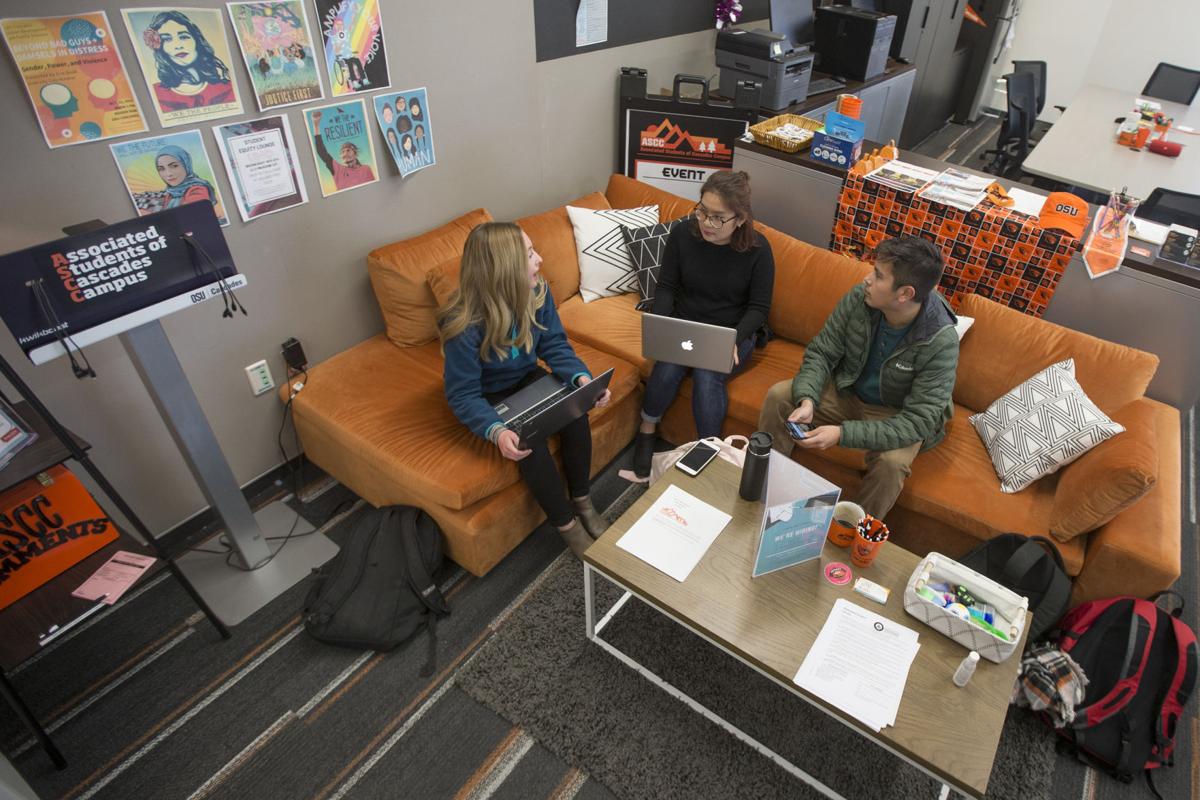 Risa Christie, from left, Jade Duong and Fernando Arellano visit with each other while using the equity lounge in Tykeson Hall at OSU-Cascades. (Ryan Brennecke/Bulletin photo) 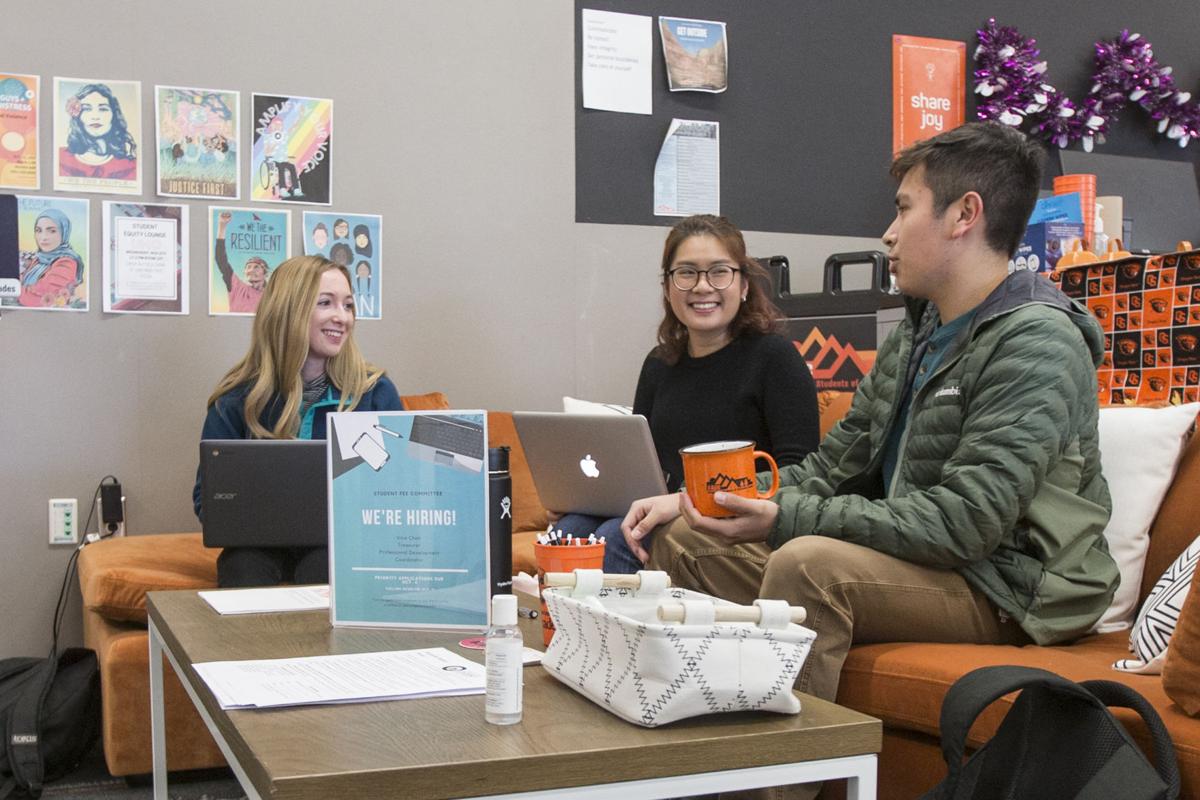 Risa Christie, from left, Jade Duong and Fernando Arellano visit with each other while using the equity lounge in Tykeson Hall at OSU-Cascades on Wednesday, Oct. 30, 2019. (Ryan Brennecke/Bulletin photo) 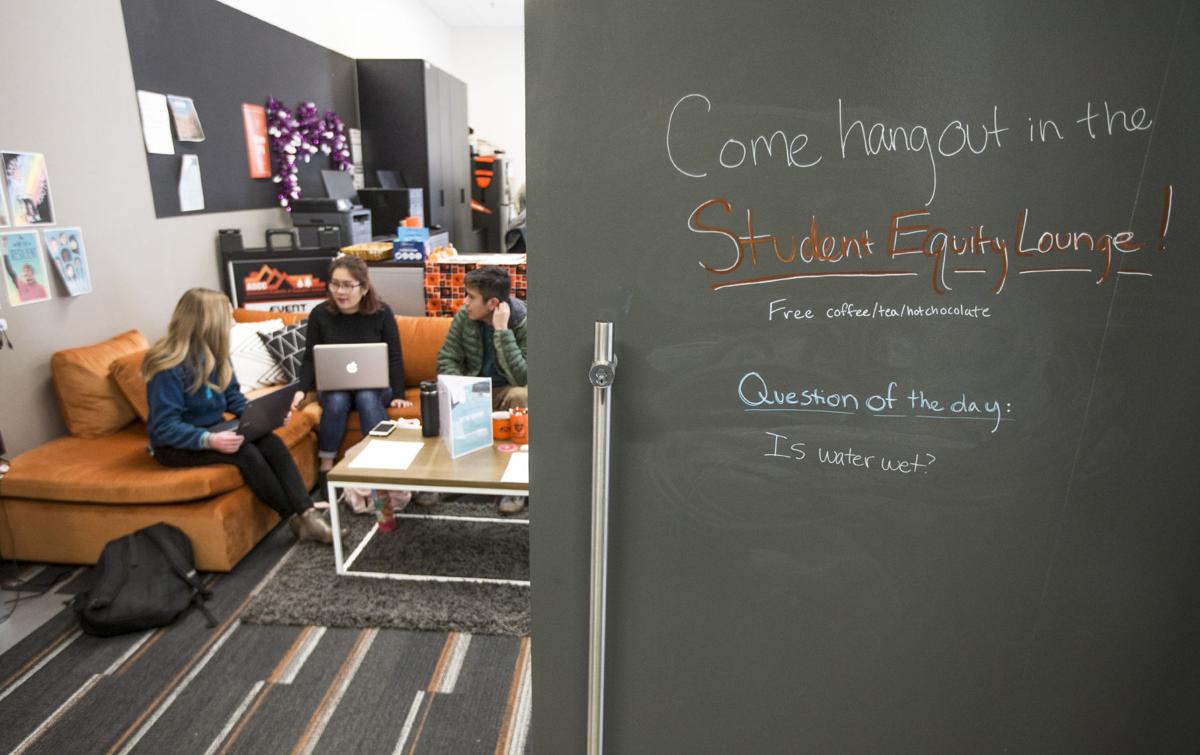 The Equity Lounge can serve as a “pseudo-Student Success Center” where students can hang out, do homework and chat.

Risa Christie, from left, Jade Duong and Fernando Arellano visit with each other while using the equity lounge in Tykeson Hall at OSU-Cascades. (Ryan Brennecke/Bulletin photo)

Risa Christie, from left, Jade Duong and Fernando Arellano visit with each other while using the equity lounge in Tykeson Hall at OSU-Cascades on Wednesday, Oct. 30, 2019. (Ryan Brennecke/Bulletin photo)

The Equity Lounge can serve as a “pseudo-Student Success Center” where students can hang out, do homework and chat.

Risa Christie, a sophomore at Oregon State University-Cascades, said that because of a chronic illness, being active can be difficult. So when she had the opportunity to create a place on the school’s Bend campus that was welcoming to all students, from underrepresented groups such as students with disabilities, she was thrilled.

“I think, especially in Bend, a lot of our activities are focused on being physical or being outdoors, and that’s not always accessible,” said Christie, 19. “Having a space on campus that didn’t have to be active was important to me.”

Christie was hired this fall as the Student Inclusion Coordinator for Associated Students of Cascades Campus, OSU-Cascades’ student government and spearheaded the creation of the new Student Equity Lounge, which opened to students at the start of the school year. The lounge, which shares a space with OSU-Cascades’ student government offices in Tykeson Hall, is meant as a comfortable space for students of color, students with disabilities, students who identify as LGBTQ and other underserved groups.

In November 2018 — student demographics for 2019 haven’t been tallied yet — 17% of OSU-Cascades students were people of color, according to college spokesperson Christine Coffin. That makes the campus more ethnically diverse than its surrounding city. Bend is 91.3% white, according to the 2010 U.S. Census Bureau.

Because OSU-Cascades is still seeking funds for a separate building to house a proposed Student Success Center, Christie said the Equity Lounge can serve as a “pseudo-Student Success Center” where students can hang out, do homework and chat. This is useful, as the young university hasn’t formed a club for every demographic group yet, she said.

“We want to make sure that even if there isn’t a club that speaks to a particular student group or experience, that we can create gatherings in that space,” Christie said.

The small lounge has a few phone chargers, a microwave with tea and hot chocolate packets and a few social justice-themed posters on the wall. Its centerpiece is a large, burnt-orange couch — the exact shade of orange that Oregon State University uses everywhere — which Christie joked has drawn in some curious students.

Student government officers are trying to plan events and speakers for the lounge. Some will be explicitly social justice and equity themed, while others will be meant as fun community builders. An example of the latter is Equity Lounge Uno next week. Any student can pop in, eat free pizza and play a few rounds of the card game.

Fernando Arellano, a sophomore who is the associated students’ director of legislative affairs, said that having a space like the Equity Lounge at OSU-Cascades is crucial. He said growing up Mexican-American in Los Angeles, there was a strong community among fellow people of color, and he wanted to grow something similar on his college campus.

“We were really pushing for a space on campus to cultivate identity-based community,” said Arellano, 19. “To really see a place for us, to cultivate something, it’s really necessary, especially for the future of this campus.”

Christie was hired by the student government because of her welcoming demeanor and ability to get people involved, Arellano said.

Jade Duong, a senior from Vietnam, said she’s worked with the student government and Christie to help spread the word about the lounge.

“I wanted to create a place where international students could hang out, sit down and talk,” said Duong, 22.

Brian Chavez, a senior and the student government president, called the Equity Lounge “a great resource.”

“Prior to this, there wasn’t a space on campus for marginalized communities to hang out,” said Chavez, who identifies as Latino. “As you know, our campus is pretty small right now, so there isn’t much space for students to go.”

Although some students have popped into the Equity Lounge since it opened last month, most students don’t know it exists yet, Christie said. Arellano said he was confident the lounge would soon grow in popularity.

“This is just the start of something that’s going to be big,” he said.