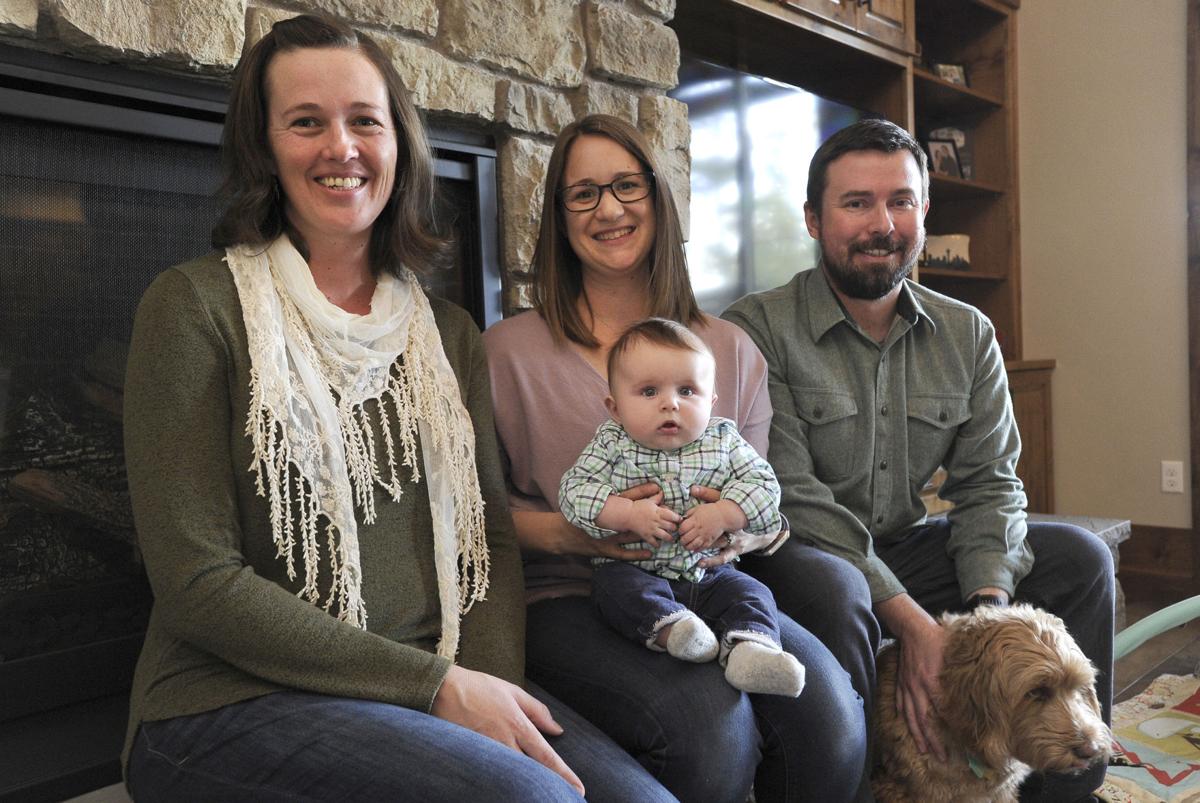 Jess Eggert, left, sits with Courtney Reeves, Andrew Reeves and their 5-month old son Jon in the Reeves’ home. Eggert was a surrogate for the Reeves in the fall. (Ryan Brennecke/Bulletin photos) 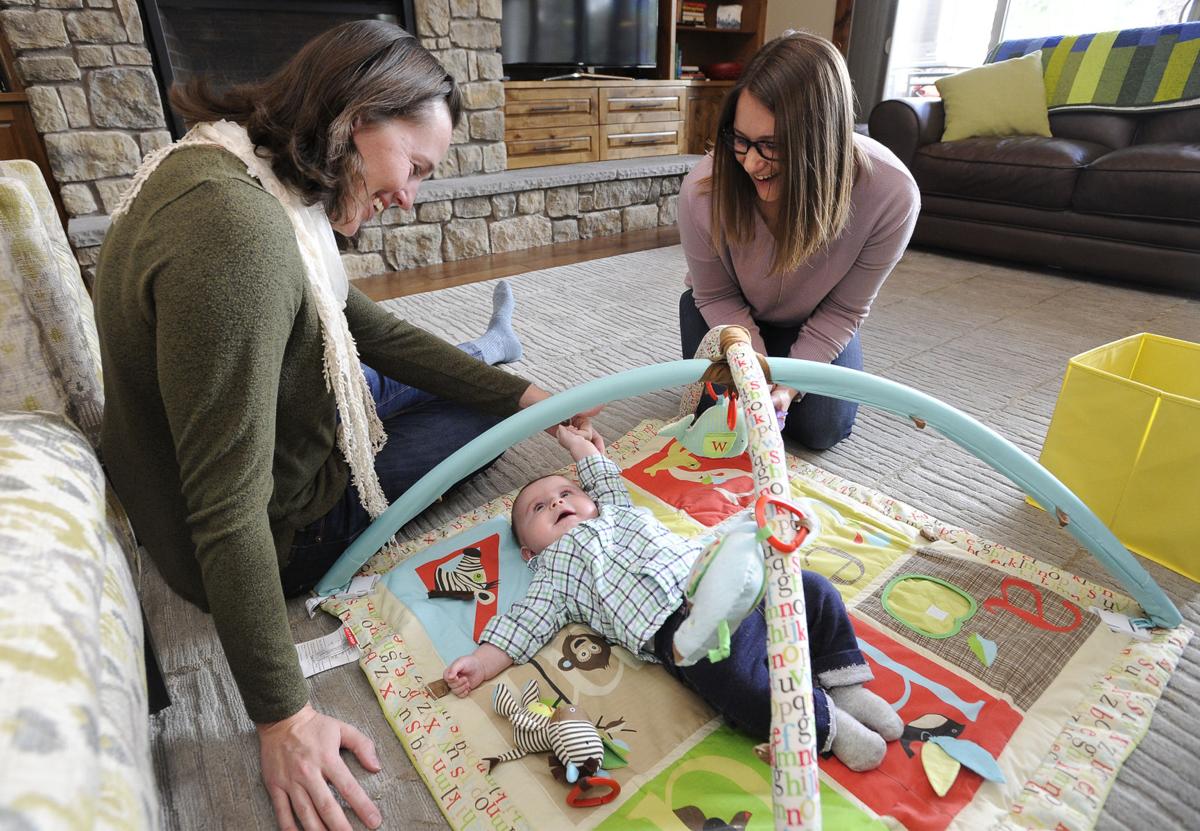 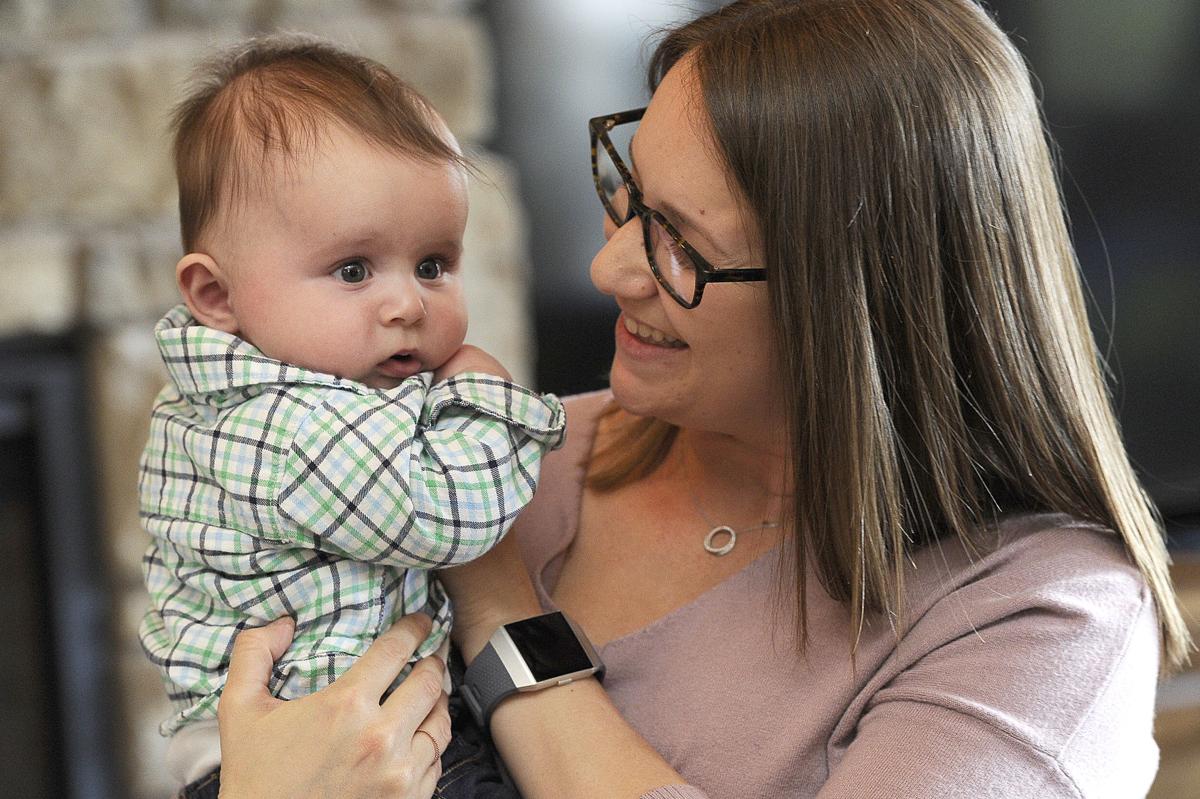 “I wanted a baby that was part of us,” Courtney Reeves said, holding Jon. 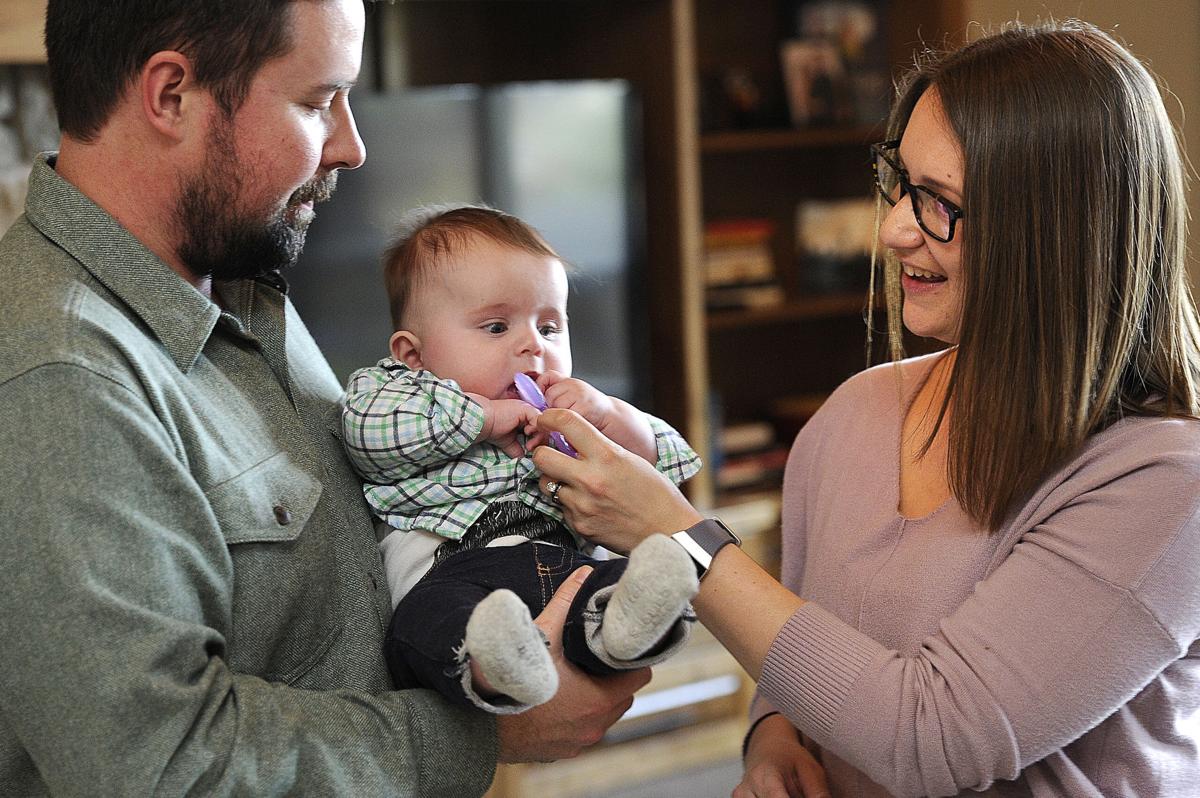 Jess Eggert, left, sits with Courtney Reeves, Andrew Reeves and their 5-month old son Jon in the Reeves’ home. Eggert was a surrogate for the Reeves in the fall. (Ryan Brennecke/Bulletin photos)

“I wanted a baby that was part of us,” Courtney Reeves said, holding Jon.

New parents are often in awe over their first child, and that is certainly true for Andrew and Courtney Reeves.

The Bend couple marvels at how much their son, Jon, looks like his father. They are amazed at how well he behaves on trips and how he sleeps through most nights. They have already taken their 5-month-old baby on family vacations to Utah and Hawaii.

But Jon’s presence is more a miracle than his good behavior. He was born through surrogacy, an arrangement in which a woman agrees to become pregnant and gives birth to a child for a couple, who will be the child’s parents. The surrogate carries an embryo created in a laboratory using an egg and sperm from the child’s parents.

Using a surrogate mother was the furthest thing from their minds three years ago, when Andrew Reeves, 38, an owner of a small venture management firm, and Courtney Reeves, 34, a former teacher at the Deschutes River Montessori School in Bend, found themselves at an emotional crossroads.

Courtney Reeves had been pregnant with identical twins in 2015, but lost them at five months.

The physical toll left her unable to have children. The couple looked into adoption, but grew discouraged by the time-consuming hurdles.

Then, a friend introduced them to Bend resident Jessica Eggert, who had been a surrogate for a couple from Bejing, China, in 2015. Eggert answered questions for the Reeveses, and as they all got to know each other, it became obvious Eggert could help. She could become their surrogate.

A surrogate offered a solution that went to the heart of what the couple sought.

“I wanted a baby that was part of us,” Courtney Reeves said.

The Reeveses are far from alone in pursuing surrogacy in Oregon. The state has become a beacon for couples desperate to start a family while struggling with fertility issues.

Because Oregon does not have any laws regarding surrogacy, no government regulation hinders the process. Couples, gay or straight, are attracted to the welcoming environment — especially couples from other countries where surrogacy is illegal.

And surrogates are compensated fairly in Oregon, earning about $40,000 for a job that can take longer than a pregnancy. The compensation has helped surrogates buy their first homes, continue to be stay-at-home mothers for their own children or build up emergency funds for their families.

The number of surrogacies has nearly tripled in Oregon over the past few years.

The Portland-based Northwest Surrogacy Center, the largest agency in the West, is seeing a huge increase. The number of babies born each year through the agency — which has offices in Denver and San Francisco — has grown from 64 in 2014 to 187 in 2017. Last year, the agency helped couples from 28 countries.

Already this year, 31 babies have been born in Oregon through the agency, which was founded in 1994.

Jeanette Passwaters, director at Circle of Life Surrogacy in Sunriver, said another draw for surrogacy in Oregon is the fact that the state allows the parents to obtain a pre-birth order to be named as the child’s parents before birth. The order requires the hospital to list the parents on the child’s birth certificate. Other states, including Washington, do not recognize pre-birth orders, which means couples have to wait until after the baby is born to become legal parents, and sometimes go through an adoption process because hospitals list the surrogate as the mother on the birth certificate.

“Anybody who wants to be a parent can come to Oregon and have a surrogate and have their names listed on the birth certificate,” Passwaters said. “It’s just a very surrogate-­friendly state.”

Passwaters opened her surrogacy agency in April 2016, and since then it has grown to not only help couples from across the country, but around the globe. She is currently working with nine surrogates, including some who are carrying babies for parents from New Zealand and Austria.

Passwaters, who has been a surrogate on three occasions, prefers to run the smaller operation so she can personally care for each surrogate and parents through the entire process.

The path to surrogacy

Pursuing surrogacy is a long road that can take more than a year.

For the parents, it starts with extracting eggs or finding an egg donor, which can take months. Then it’s a matter of finding a surrogate, or matching with one through an agency. The process then moves forward with signing a contract that outlines possible outcomes of the pregnancy. The parents also cover the surrogate’s health care costs.

Surrogates have to complete medical and psychological evaluations. A woman can only be a surrogate if she has already had a child. When a contract is signed, the surrogate goes through nearly two months of doctor visits for shots leading up to in vitro fertilization.

Carrie Ramoz, marketing manager at Northwest Surrogacy Center, lives in Bend and hosts a monthly surrogate meetup group at various coffee shops around town. Women in all stages of surrogacy attend the meetups to ask questions and share concerns.

Topics at the meetups include how to explain surrogacy to their children, extended family and employers.

Ramoz, who was a surrogate for a Swedish couple in 2014, said at the end of a pregnancy, the group will host a celebration for the surrogate.

“Some women don’t feel comfortable talking about it with their co-workers, so it’s nice to talk with women who are going through it,” Ramoz said. “We didn’t have it when I was going through it.”

A topic of concern at the meetups is a recent policy change at St. Charles Health System, where its hospitals no longer offer a second hospital room for the parents. Before, parents had their own room to be with the baby after the surrogate gave birth.

The change stems from the need to keep rooms open for emergencies or other pregnant women going to the hospital, according to Tori Bernier, director of women’s and children’s services at St. Charles Health System.

Parents of surrogate-born babies are welcome to stay at the Ronald McDonald House on the St. Charles Bend campus, or hospital staff can help them find a hotel room, Bernier said.

Limiting a surrogacy birth to one room is standard practice at hospitals across Oregon, including Oregon Health & Science University in Portland.

“We decided that is not something we could offer,” Bernier said. “We really thought long and hard about it. We are not doing anything that is not normally done elsewhere.”

Those pursuing surrogacy now in Central Oregon are aware of the change and are prepared for one room in the hospital.

But the Reeveses were caught in the middle of the policy change.

When they signed their surrogacy contract in 2016, they expected to have their own room at St. Charles Bend. Shortly before their son’s birth in October, their lawyer informed them the policy had changed. The couple was given a room in the neonatal intensive care unit, but there was only room for one adult, so Andrew Reeves had to sleep in his car in the hospital parking lot.

“We could have stayed in a hotel, but what if she went into labor, and we’re 10 minutes away,” Courtney Reeves said.

Adding to their frustration, the couple’s health insurance recently billed them $7,500 for their stay in the NICU unit. They had to explain the situation, and were able to get the price down to about $1,000.

Most hospitals no longer have nurseries so babies stay with the mother, which is not ideal in surrogacy situations.

Fortunately for the Reeveses, they were with their surrogate when their baby, Jon, was born Oct. 29. He weighed 8 pounds, 1 ounce.

Their surrogate remembers clearly how joyful the moment was for everyone in the room.

“We all heard him cry. His little cry,” Eggert said. “The cord was cut and then the nurse handed him right to Courtney, and she was there for skin to skin. She starts crying. I’m crying. It was this super magical moment. It was so sweet.”

Eggert said it’s an amazing experience being able to help people and also be able to stay home during the process and be with her own two boys.

If she does surrogacy again, Eggert said, it would only be for the Reeveses.

“I told them if I ever did it again, it would be for you guys,” Eggert said.

The Reeveses feel the same way.

Like any new parents, they are asked about plans for another child.

The couple is keeping their options open.

Maybe when Jon turns 1, they will look into surrogacy again with Eggert.

Until then, they are enjoying parenthood. When her son scowls it reminds Courtney Reeves of her nephew. When she looks at baby pictures of her husband, it’s like looking at pictures of her baby boy.