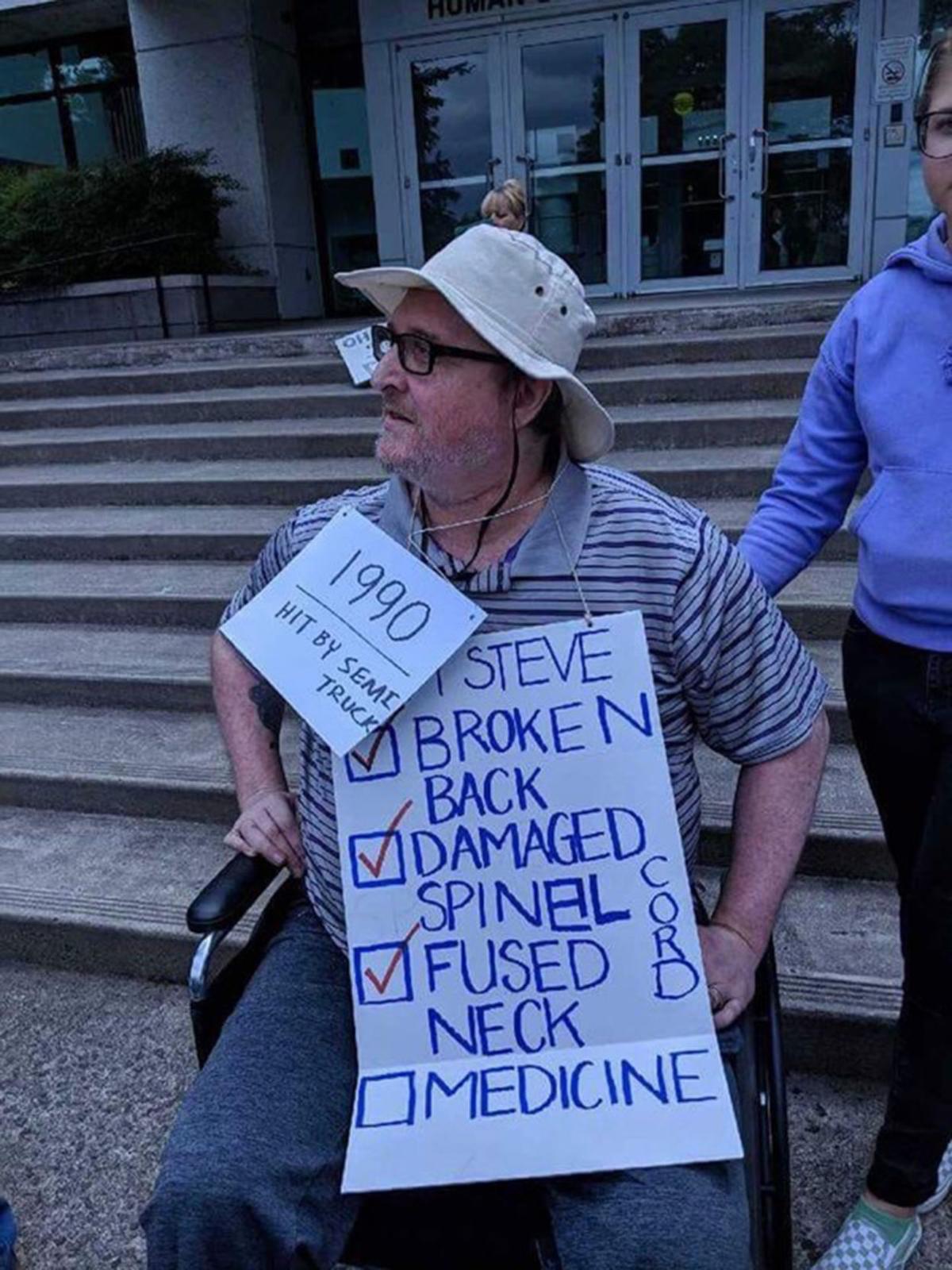 Steve Hix attends a protest of restrictive laws on opioids that patients say hurt the people who rely the drugs for less pain outside the Oregon Health Authority in Salem on Thursday, July 19, 2018. (Anna Reed/Statesman Journal) 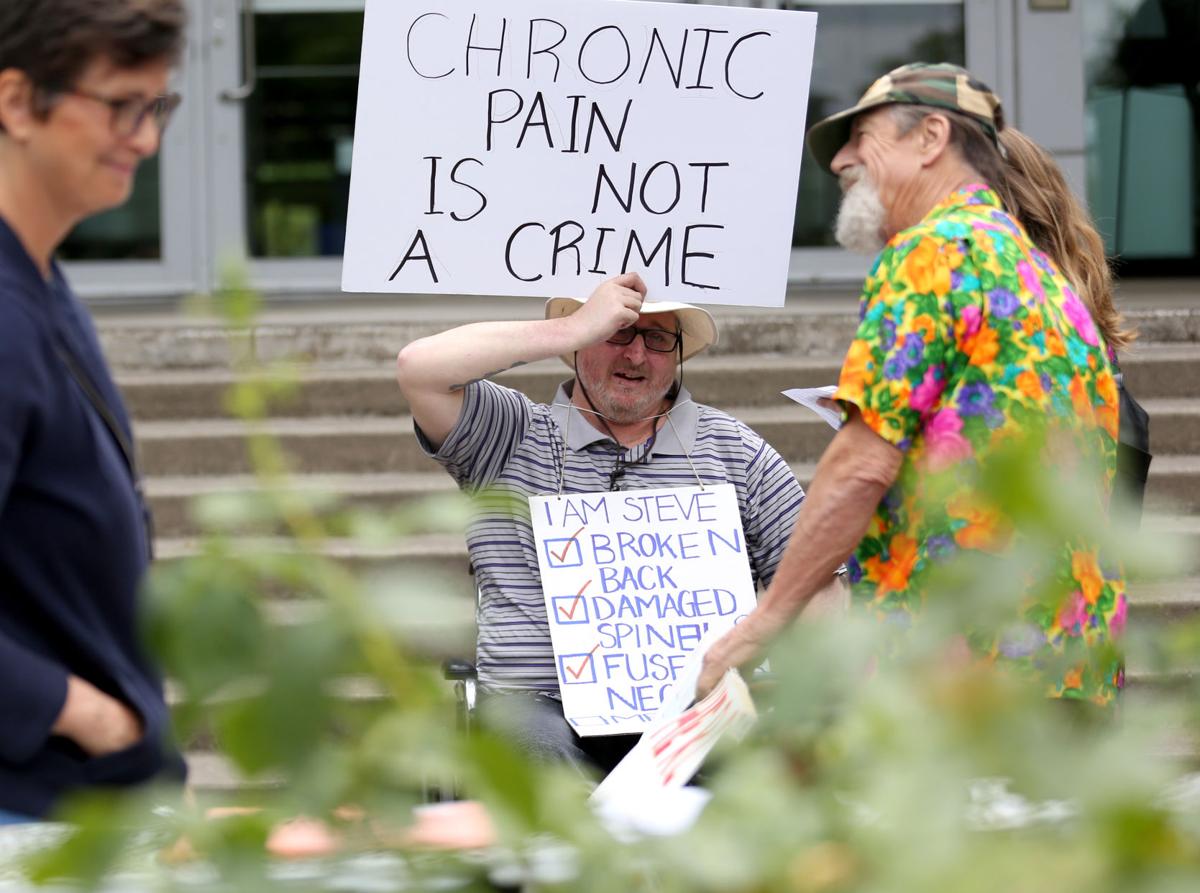 Mary Oleri, from left, Steve Hix and Tim Harless attend a protest of restrictive laws on opioids that patients say hurt the people who rely on the drugs for less pain outside the Oregon Health Authority in Salem on July 19.(Anna Reed/Statesman Journal) 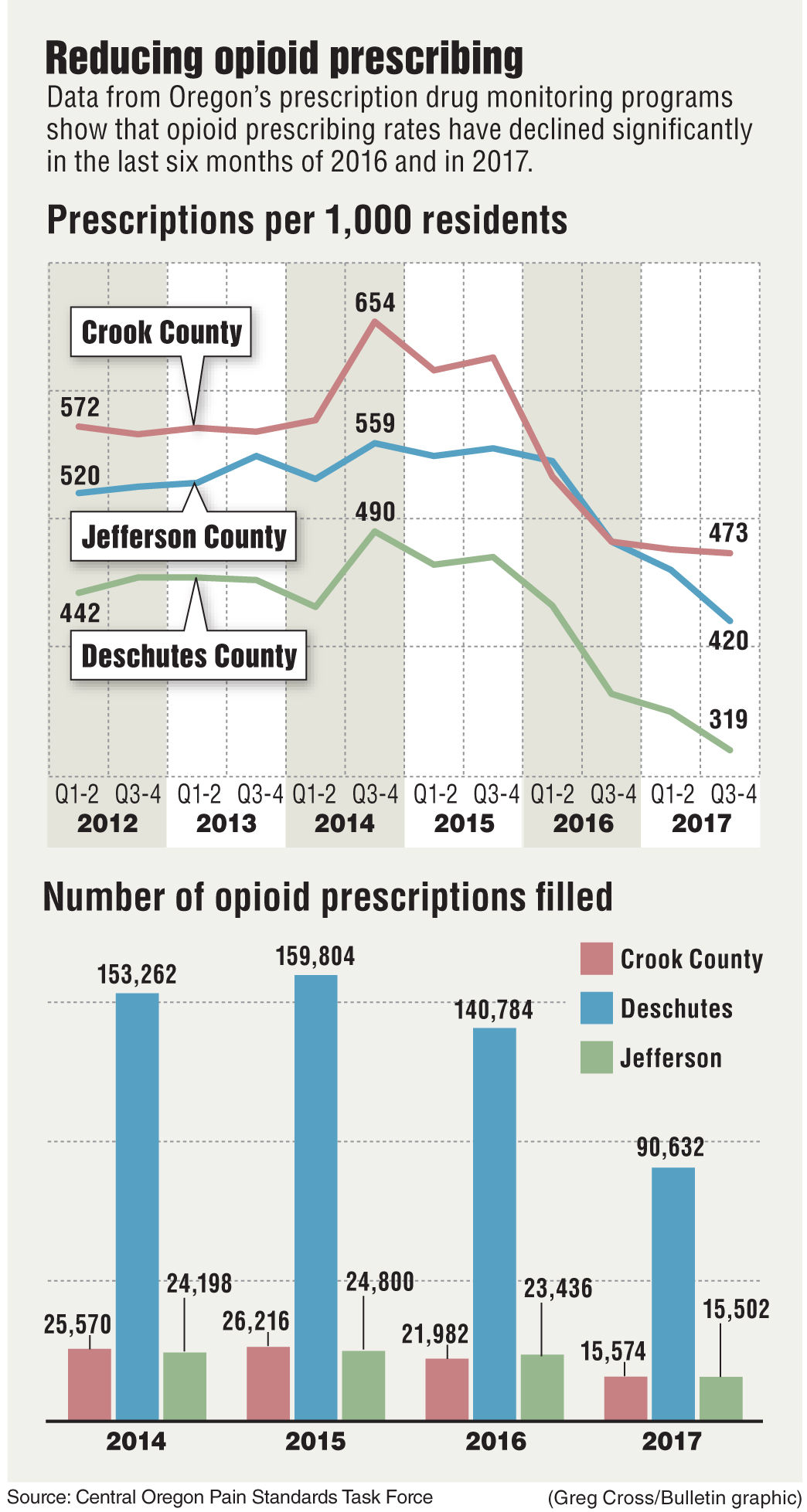 Steve Hix attends a protest of restrictive laws on opioids that patients say hurt the people who rely the drugs for less pain outside the Oregon Health Authority in Salem on Thursday, July 19, 2018. (Anna Reed/Statesman Journal)

Mary Oleri, from left, Steve Hix and Tim Harless attend a protest of restrictive laws on opioids that patients say hurt the people who rely on the drugs for less pain outside the Oregon Health Authority in Salem on July 19.(Anna Reed/Statesman Journal)

Oregon could have some of the country’s strictest limits on opioids for chronic pain patients under a proposal being considered for the state’s Medicaid program. The proposed change would limit Oregon Health Plan coverage for five broad chronic pain conditions to 90 days of opioid pain relievers and would force patients who have been taking opioids for longer to be tapered off those medications within a year.

State officials say the move is being considered to reduce the overprescribing of opioids, which has led to an epidemic of overdoses, and to provide alternative treatments previously unavailable to Oregon Health Plan members.

The proposal has angered and frightened many chronic pain patients who counter that alternative approaches don’t work for everybody, and that the decision to discontinue opioids should be made by a patient’s doctor, not a government agency.

“Individuals with chronic pain really face debilitating conditions that impact quality of life, yet we’re faced with this significant opioid epidemic where we know there’s a lot of misuse and overprescribing,” said Dr. Dana Hargunani, chief medical officer for the Oregon Health Authority. “We’re trying to use evidence to guide us, but we really welcome public input into the process. I know it’s a really significant issue for many individuals.”

The proposed change came out of the Chronic Pain Task Force, an ad hoc committee created to provide guidance on reducing opioid use under the Oregon Health Plan. The Oregon Health Plan has a unique structure among state Medicaid programs, relying on a prioritized list of health services ranked by experts in order of importance to patients. State lawmakers then decide where in the prioritized list to draw the line between covered and uncovered services.

By establishing a new entry in the prioritized list above the cutoff line, the Oregon Health Plan would then cover alternative treatments, such as yoga, acupuncture or physical therapy, but would try limit the use of opioids.

Chronic pain patients rallied last week in front of the OHA offices in Salem to protest the change. Organizers of the protest declined to comment on the record, citing fears of reprisals and concerns their access to pain medications would be cut off.

Steve Hix, a 50-year old Albany man who is almost completely bedridden with spine and back injuries, suffered through a day in his wheelchair to protest the opioid restrictions.

In 1990, Hix was hit by a semitruck while riding his motorcycle, and then incurred a series of falls in 1994 that left him with extensive spinal damage and excruciating pain. His doctor talked him out of suicide and arranged for spinal fusion surgery for him. He prescribed Hix high doses of opioids to deal with the pain.

For more than 13 years, Hix used fentanyl patches and morphine pills to keep his pain in check, adding medical marijuana as a distraction from his pain. When his doctor announced plans to retire within the year, Hix worried he would get cut off from his high doses and began tapering himself off high doses, squirreling away his unused medications just in case.

“The less medication I was taking, the more I ended up in bed,” Hix said. “The pain I had to suffer through to get to the protest, you couldn’t even imagine.”

Chronic pain patients plan to take their fight to a benefits subcommittee of the Health Evidence Review Commission, which will be considering the proposal at its Aug. 9 meeting. The full commission could give final approval as early as October, but the soonest the restrictions would go into effect would be in 2020.

The proposed change mirrors a policy for lower back pain implemented in 2016 with similar limits on initial and longer term opioid prescriptions. But that policy has proved difficult to implement.

The prioritized list represents the minimum level of coverage provided under the Oregon Health Plan, but care is provided mainly through regional coordinated care organizations, which have no way to determine for what condition an opioid prescription is being filled, unless they require prior authorization.

“It would be extremely difficult to implement (prior authorization) criteria over a large category of drugs,” said Dr. Alison Little, medical director for Medicaid programs for PacificSource Health Plans, which operates the CCO in Central Oregon. “They are very frequently prescribed, and so it’s been a challenge to implement that guideline.”

PacificSource sent letters to doctors in 2016 to inform them of the new lower back pain rules and has focused on tapering patients with the highest daily doses of opioids to bring them below guidelines set by the Centers for Disease Control and Prevention. Those guidelines call for doctors to prescribe no more than 90 milligrams of morphine equivalent per day, or to justify their decision to do so.

The CDC guidelines, however, did not provide clear directions on what to do with patients who have been taking doses above that threshold for a longer period of time. Some doctors have interpreted the guideline to mean that patients should be tapered below that threshold, even if they are unwilling to do so.

While studies suggest that higher doses of opioids increase the risk for overdose, there is little research to suggest that tapers, particularly forced tapers, improved outcomes for patients.

Little said she’s heard little pushback from patients or doctors about the lower back pain guidelines and wasn’t sure how many patients had been tapered completely off opioids.

“What I don’t know is how many patients pay cash,” she said. “We can have limits on how much we pay for, but that doesn’t stop them from actually getting more.”

According to data from the prescription drug monitoring program, the number of opioid prescriptions in Central Oregon dropped significantly in 2017, although, it’s not clear how much of that could be attributed to the Oregon Health Plan coverage changes. The number of patients on high doses of opioids in the region has also declined steadily since 2015.

“They’re predominantly being tapered now to the 50 to 90 milligram range since 2014,” she said. “There are still people taking opioids, they’ve just been tapered into a safe dosage range.”

Statewide, opioid prescribing has been on a downward trend since 2014, while use of alternative treatments such as acupuncture, chiropractic treatment and physical therapy increased in 2016 and 2017 after the new low back pain policy was adopted.

Critics charge the proposed policy is misguided as overdose deaths from prescription opioids are dropping, while deaths from heroin and other street drugs are rising. Patients with chronic pain like Hix feel they are being punished and treated like criminals even though they have never misused their medications.