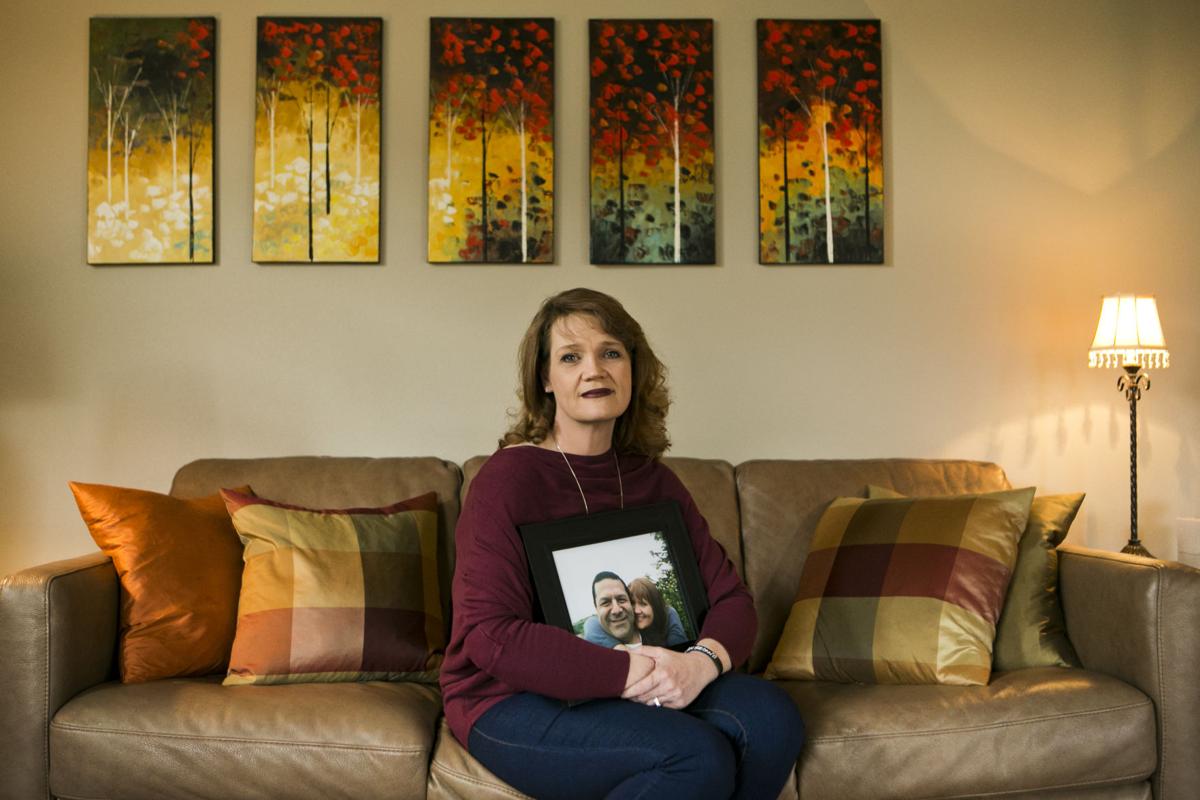 Angela Estrada holds a photograph of her and her late husband, Lenny, at her home in Redmond on Tuesday, February 20, 2018. Lenny suffered from brain tumors and died in November 2017 at home in hospice care. Angela credits palliative care with improving Lenny's quality of life. (Joe Kline/Bulletin photo) 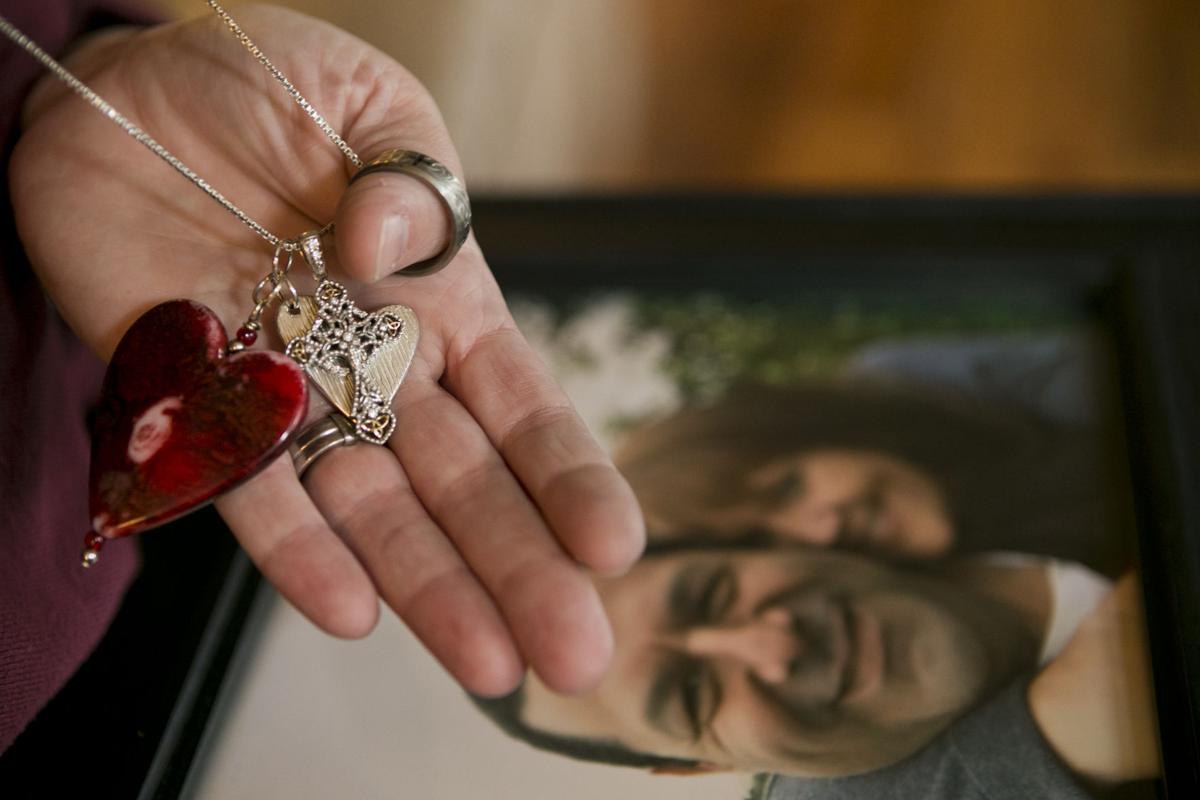 Angela Estrada holds her late husband Lenny's wedding ring, as well as a cross and heart he gave her, on a necklace. Lenny suffered from brain tumors and died in November 2017 at home in hospice care. Angela credits palliative care with improving Lenny's quality of life. (Joe Kline/Bulletin photo) 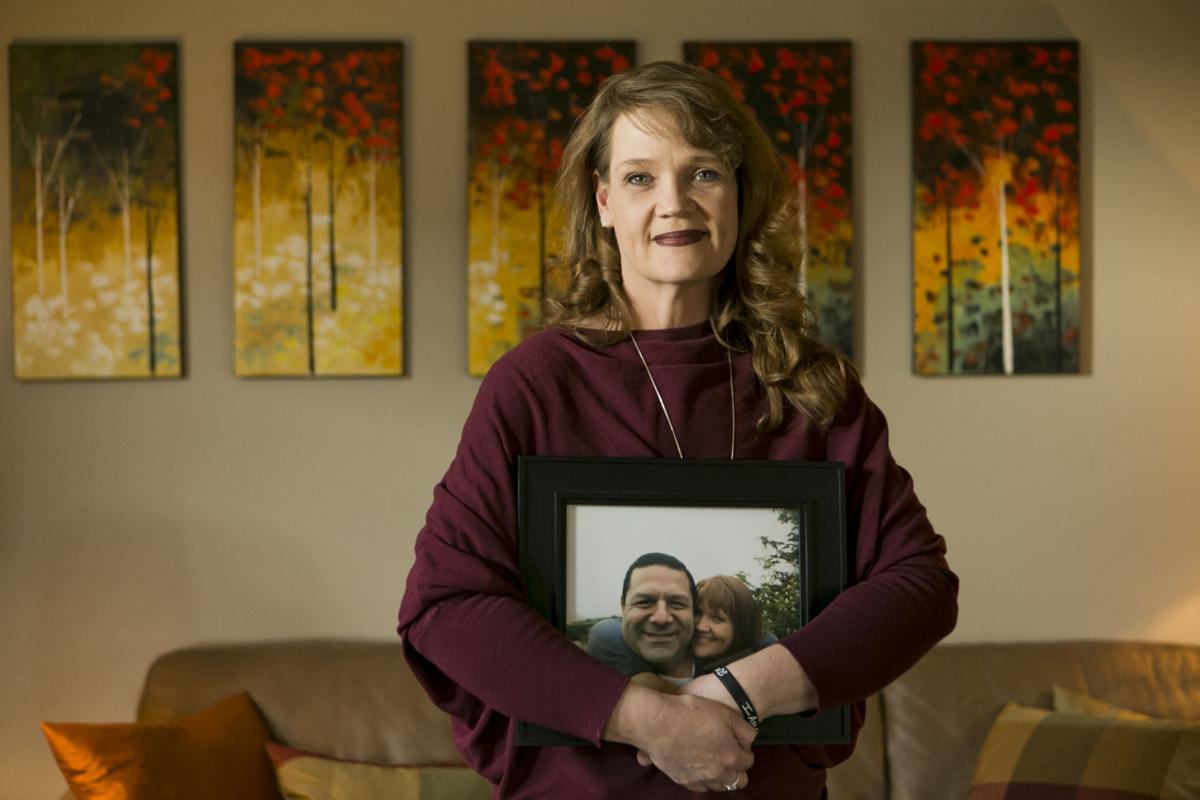 Angela Estrada embraces a photograph of herself and her late husband, Lenny, at her home in Redmond. Lenny suffered from brain tumors and died in November 2017 at home in hospice care. Access to pain medication dramatically improved his quality of life before he died. BELOW: Angela holds Lenny’s wedding ring, as well as a cross and heart he gave her, on a necklace.(Joe Kline/Bulletin photos) 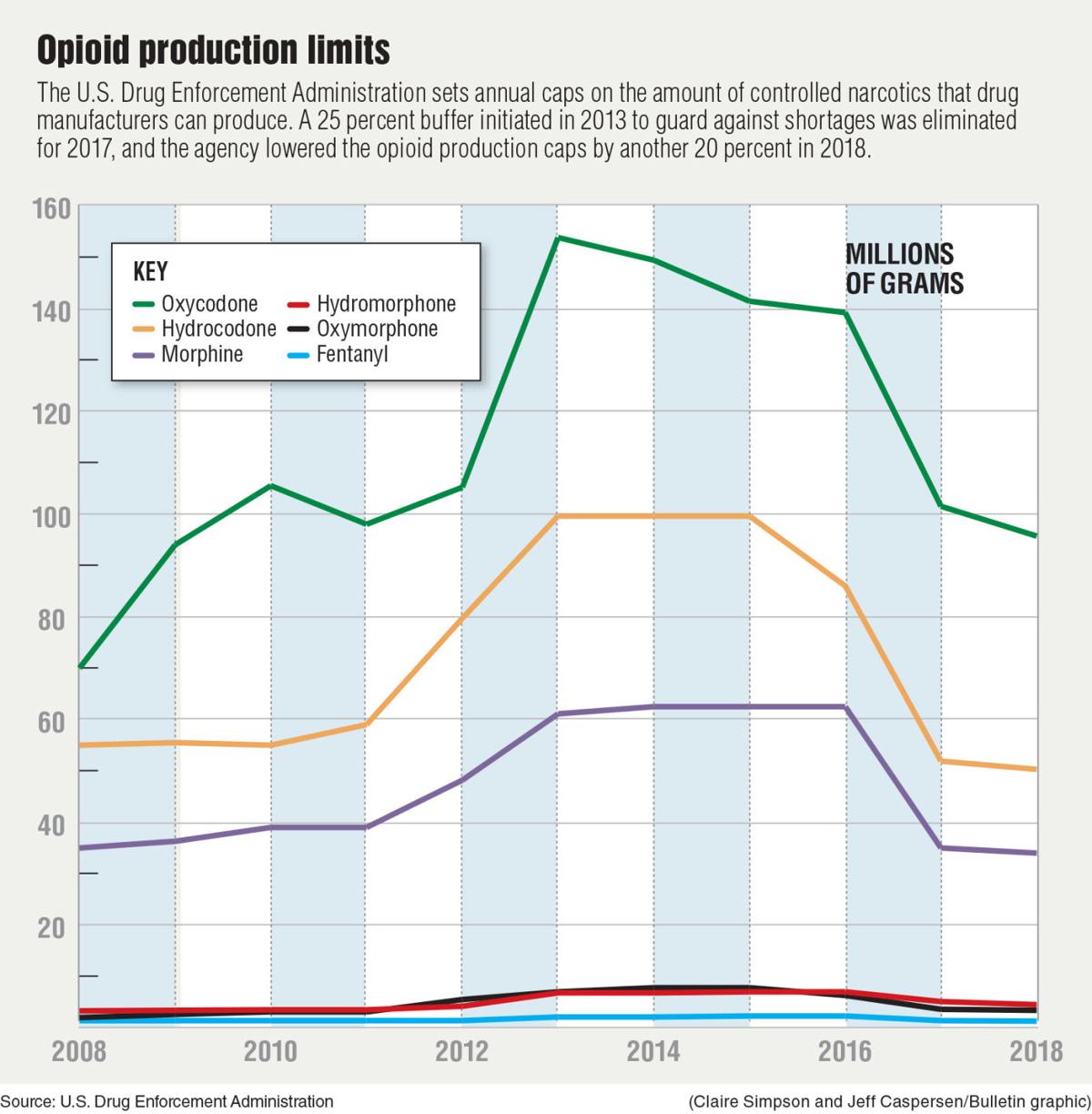 Angela Estrada holds a photograph of her and her late husband, Lenny, at her home in Redmond on Tuesday, February 20, 2018. Lenny suffered from brain tumors and died in November 2017 at home in hospice care. Angela credits palliative care with improving Lenny's quality of life. (Joe Kline/Bulletin photo)

Angela Estrada holds her late husband Lenny's wedding ring, as well as a cross and heart he gave her, on a necklace. Lenny suffered from brain tumors and died in November 2017 at home in hospice care. Angela credits palliative care with improving Lenny's quality of life. (Joe Kline/Bulletin photo)

Angela Estrada embraces a photograph of herself and her late husband, Lenny, at her home in Redmond. Lenny suffered from brain tumors and died in November 2017 at home in hospice care. Access to pain medication dramatically improved his quality of life before he died. BELOW: Angela holds Lenny’s wedding ring, as well as a cross and heart he gave her, on a necklace.(Joe Kline/Bulletin photos)

New strategies to rein in the overprescribing and misuse of opioid pain medications have almost universally excluded patients with end-of-life or cancer pain from those limits. But doctors treating such patients are increasingly reporting challenges getting medications for patients who truly need them.

“We’re starting to see a little bit of difficulty locally and nationally in getting ahold of some opioids, especially in the inpatient setting,” said Dr. Laura Mavity, a palliative care specialist at St. Charles Bend. “We need to make sure that some of these changes don’t negatively impact the hospice and palliative care populations.”

St. Charles Bend has experienced sporadic shortages of intravenous morphine and intravenous hydromorphone, known by the trade name  Dilaudid, over the past year.

“Those are IV opioids that are used in inpatient settings, and generally not the ones that we’re concerned about the public getting ahold of or abusing,” Mavity said.

The supply of morphine and Dilaudid has been affected by the hurricane that hit Puerto Rico in September as well as the flooding in Texas that shut down production facilities several weeks earlier.

Additionally, concerns about the oversupply of opioids prompted federal officials to limit manufacturing in 2017 and 2018. That may have left little excess capacity to overcome the unexpected production shutdowns.

Each year, the U.S. Drug Enforcement Administration sets manufacturing limits for narcotics, taking measures of supply and demand into account.

From 2013 to 2016, the agency had allowed manufacturers to increase production by 25 percent to guard against shortages. But that buffer was removed with a 25 percent cut in 2017, and the limits were lowered another 20 percent for 2018. The cap for morphine, for example, dropped from 62.5 million grams in 2016 to less than 34 million grams in 2018, dropping production to pre-2008 levels.

Hospice providers, such as Bend-based Partners in Care, say they too have been challenged to find medications for their end-of-life patients, especially pain relievers such as morphine and hydromorphone, and benzodiazepines used to treat anxiety, such as lorazepam and diazepam.

“Thankfully, it happens at different times, where the morphine is not as accessible as the Dilaudid and vice versa,” said Jenni Carver-Ross, Hospice House nurse manager for Partners in Care in Bend. “But the medical director has to do a lot of conversions to switch back and forth between the two.”

At times, they’ve had to deal with different concentrations of morphine. That raises the risk of an improper dose, especially when hospice patients are home, with family members or outside nurses administering the medications.

No quality of life

Palliative care treatment focuses on providing comfort and improving the quality of life for patients with serious illnesses, either as an addition to or instead of treatments that aim to cure their condition. Palliative care patients have complained that some doctors have been more reluctant to prescribe opioid pain medications, even at the end of the life.

Six years ago, Lenny Estrada of Redmond had been undergoing treatment for malignant brain tumors, and despite outliving his initial prognosis, felt his quality of life was lacking.

“He was in pain. He was miserable. He didn’t feel like he was living life to the fullest,” said his wife, Angela Estrada.

He went from his primary care doctor to his oncologist to his rheumatologist — eventually to seven different doctors treating him at the time, seeking help.

“Everybody was hemming and hawing, not sure what to do,” Angela Estrada said. “Everybody was kind of nervous about giving pain medicine.”

Over the next five years, his health declined. As the tumors progressed, he lost the use of his left leg, then his left arm, then this right leg. The pain made it unbearable to sit in his wheelchair for much more than two hours. He had to carefully schedule his trips out of the house, cut back on his speaking engagements with high school students — he would speak about cancer and the meaning of life — and the number of Ridgeview High basketball and baseball games he could attend. His world shrank.

Then in 2015, a nurse asked them if they had seen a palliative care doctor. The Estradas had always thought that was for people in crisis or for emergency situations.

“We went online and looked up the actual definition,” Angela Estrada said. “Well, timeout, this is what we need.”

Dr. Elizabeth Levesque, a palliative care specialist with St. Charles Bend, came to visit him at their house and prescribed a fentanyl patch.

“Life changed,” Angela Estrada said. “He was up more. He was enjoying life.”

With the patch, her husband could spend up to eight hours a day in the wheelchair. He increased his speaking schedule. They took day trips to Eugene. Although his disease continued to progress and his health declined, he was happier than he had been in years.

When Levesque came for a follow-up visit, Lenny Estrada broke down in tears.

“Why didn’t anybody tell me about this six years ago,” Angela Estrada recalls her husband saying.

“I got almost a year of things were good,” his wife said. “He was able to live again.”

Enclara Pharmacia, a Philadelphia-based pharmacy benefit manager that works with hospice and palliative care providers to secure medications for 85,000 patients per day across the country, recently informed its clients of significant shortages of the intravenous opioids used most often in inpatient hospices.

“The problem is that there’s just not good alternatives,” said Terri Maxwell, vice president for clinical education at Enclara. “We want to let our clients know, if something is not available, here’s what to do instead. So this has been very perplexing.”

But Maxwell said they’ve also heard from many hospices that patients are having difficulties filling prescriptions at local pharmacies.

“Pharmacies are coming up with their own policies,” she said. Enclara has heard about pharmacies setting quotas for how many pills a patient could get in a month, putting caps on the daily dosages or other limits that shouldn’t apply to hospice or cancer pain patients. One hospice told them a patient was denied a prescription because the prescribing doctor had reached a monthly limit.

When her mother was diagnosed with cancer, they had to visit three pharmacies to fill prescription for 30 tablets of Percocet, and four to find one that stocked concentrated morphine.

“When people do need something for pain, they don’t need to have it ordered and have to wait for it,” Maxwell said.

In other cases, hospice or palliative care patients run into roadblocks with their health plans. Insurance companies are increasingly requiring prior authorizations for opioid medications.

“This often occurs without any kind of warning,” said Judith Paice, director of the Cancer Pain Program at Northwestern University’s Feinberg School of Medicine. “The patient goes to the pharmacy, tries to fill their prescription and is told ‘No.’”

Plans may limit patients to certain opioids or require multiple steps from prescribing doctors before the pain medications are approved. Some insurers are requiring that prescriptions include not only the medication and condition for which its being prescribed but the insurance billing code for the diagnosis.

“The action of the insurance companies — I hate to be cynical — but it’s an effort to reduce their costs,” Paice said. “They can thump their chest saying it’s the opioid epidemic and they’re working to act as a partner against the epidemic. But I’m not confident that’s true.”

Most limits on opioid prescribing are not supposed to apply to cancer pain or palliative care patients, but pharmacies and insurance companies often have no way of identifying which patients should be exempted.

Hospice patients are enrolled in a specific hospice benefit, but palliative care is more of a philosophy of care than a specific designation.

“We don’t have a definition,” Mavity said. “Different areas do different things.”

She described the example of a patient with advanced stage cancer who is being treated with second or third line therapies after the first one failed. Such patients are not eligible for hospice because they are undergoing cancer treatment but still need pain relief due to their advanced stage cancer.