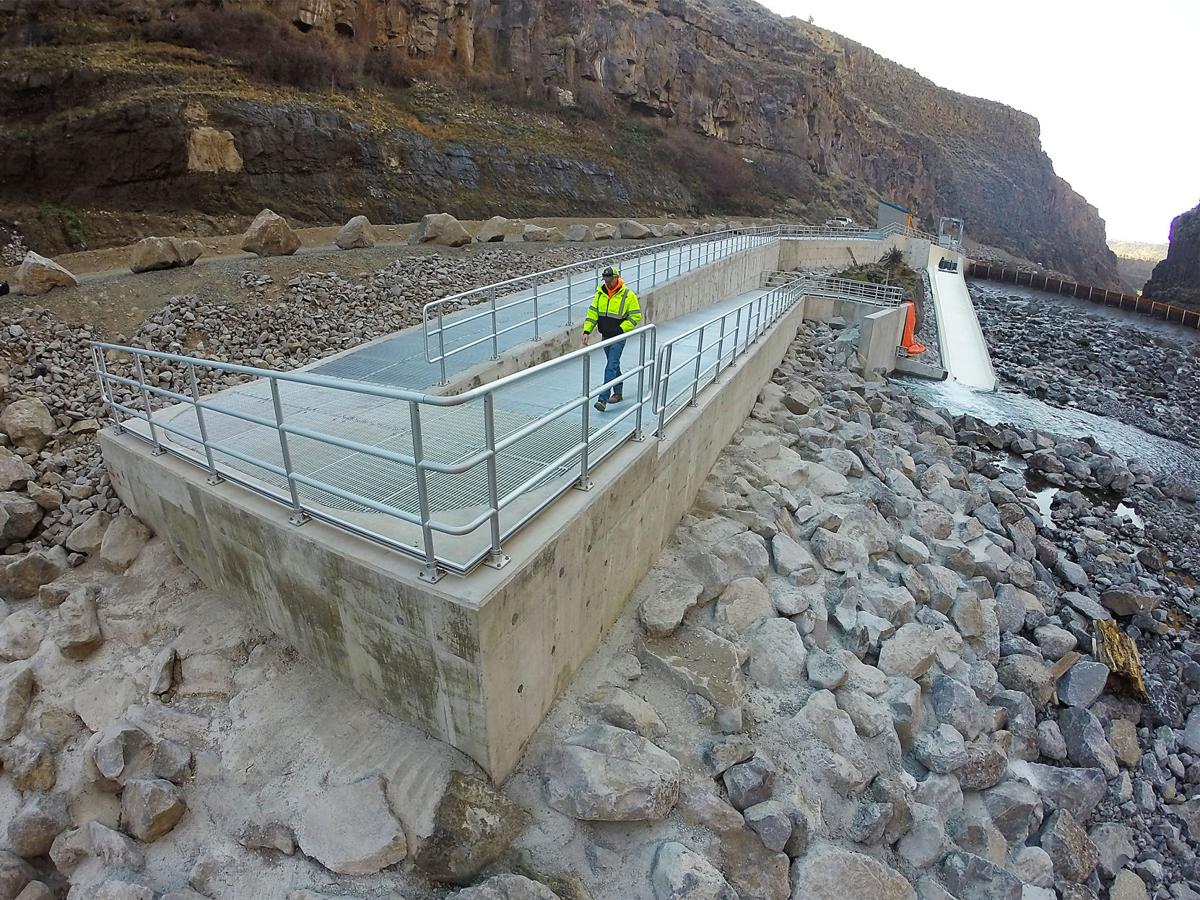 Gabriel Havlik, an employee with Deschutes Valley Water District, walks along a section of the recently completed fish ladder at Opal Springs dam on Nov. 23. 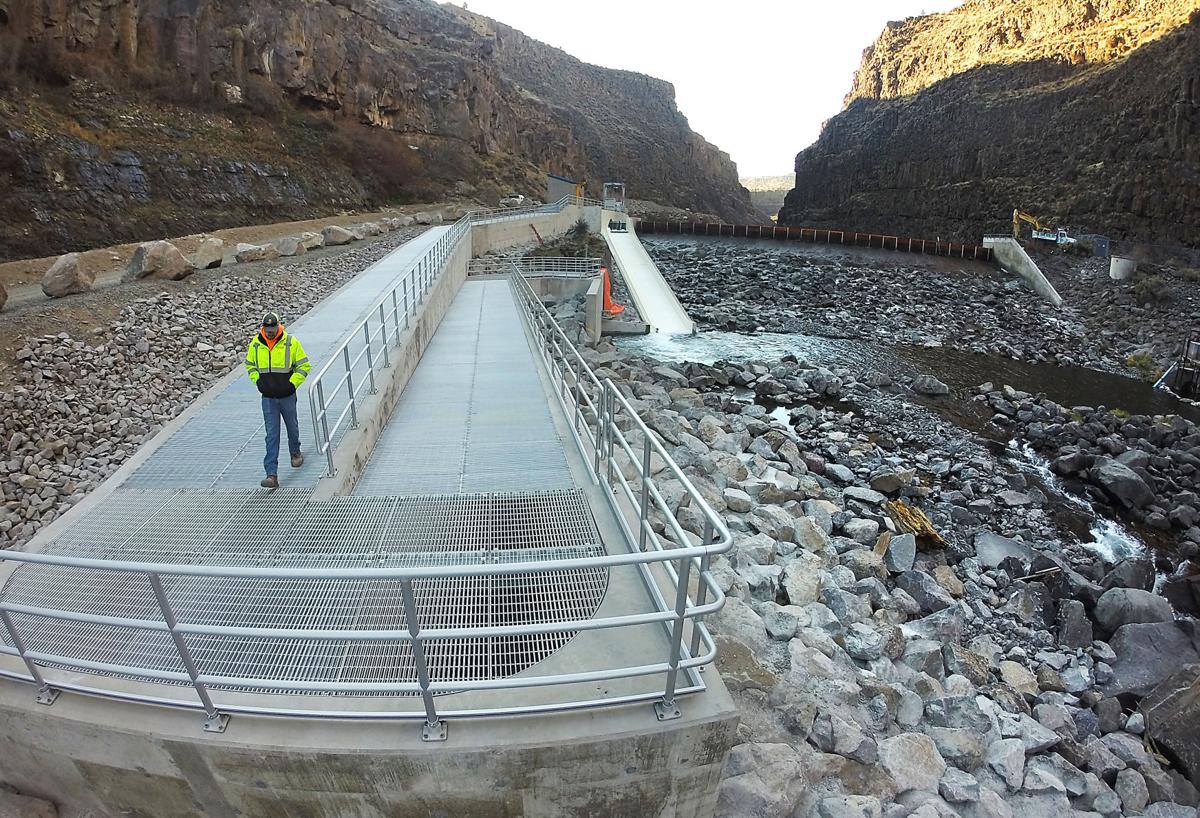 Gabriel Havlik, an employee with Deschutes Valley Water District, walks along a section of the recently completed fish ladder at Opal Springs dam in Culver on Nov. 23. 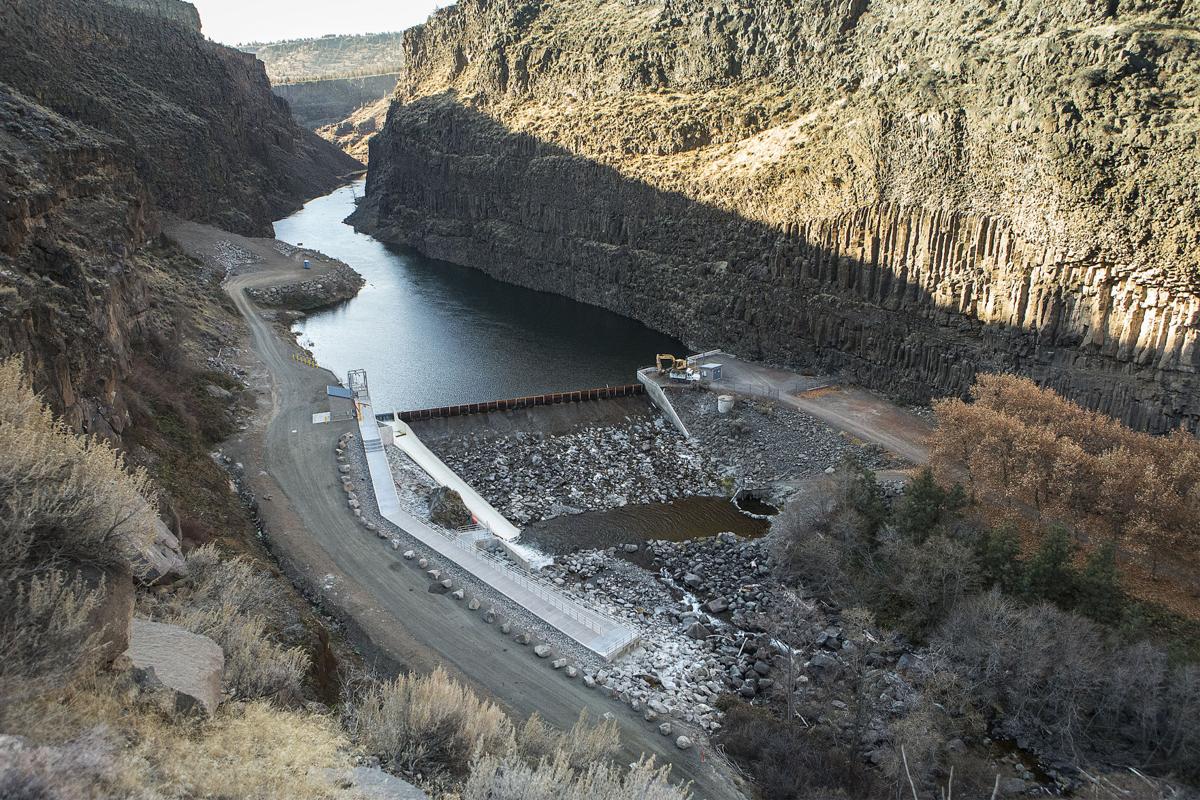 An overview of the Opal Springs dam and the recently completed fish ladder — on the left, along the road. 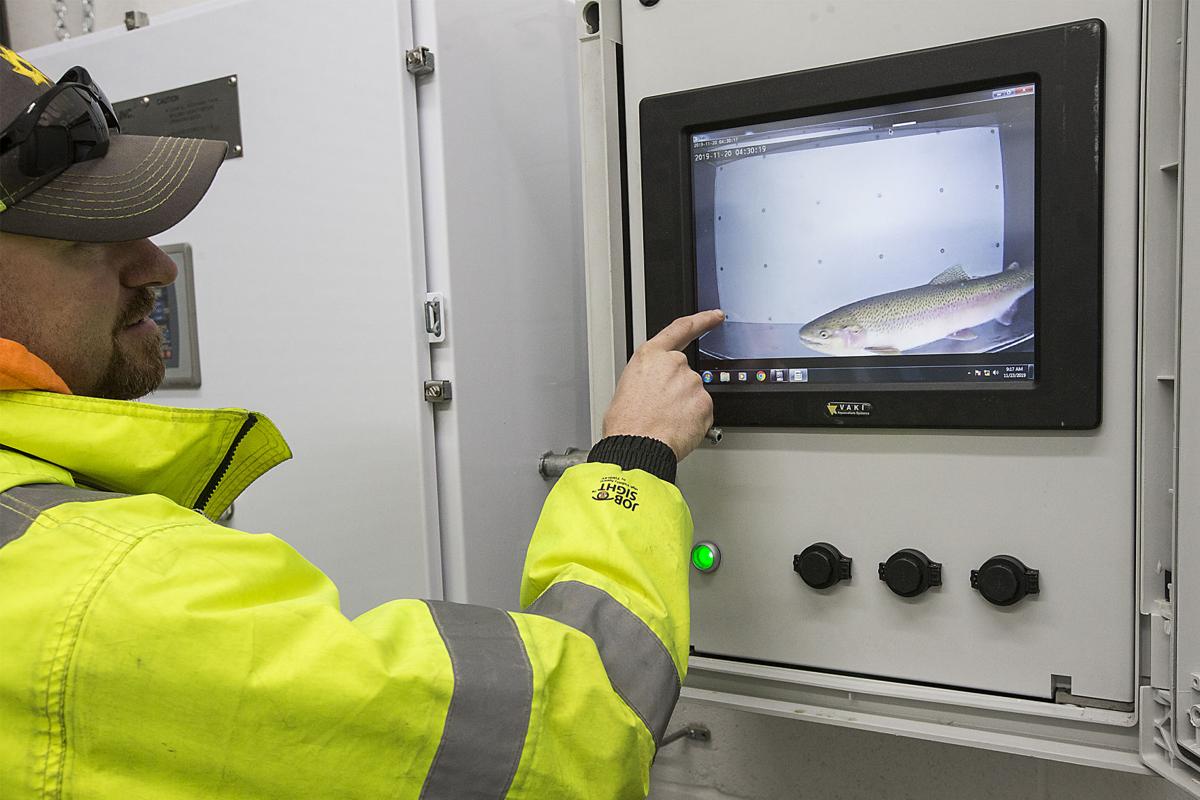 Gabriel Havlik, an employee with Deschutes Valley Water District, plays a video captured on Wednesday, Nov. 20, 2019, of a steelhead traveling through the recently completed fish ladder while giving a tour of the at Opal Springs dam facility Saturday, Nov. 23, 2019. 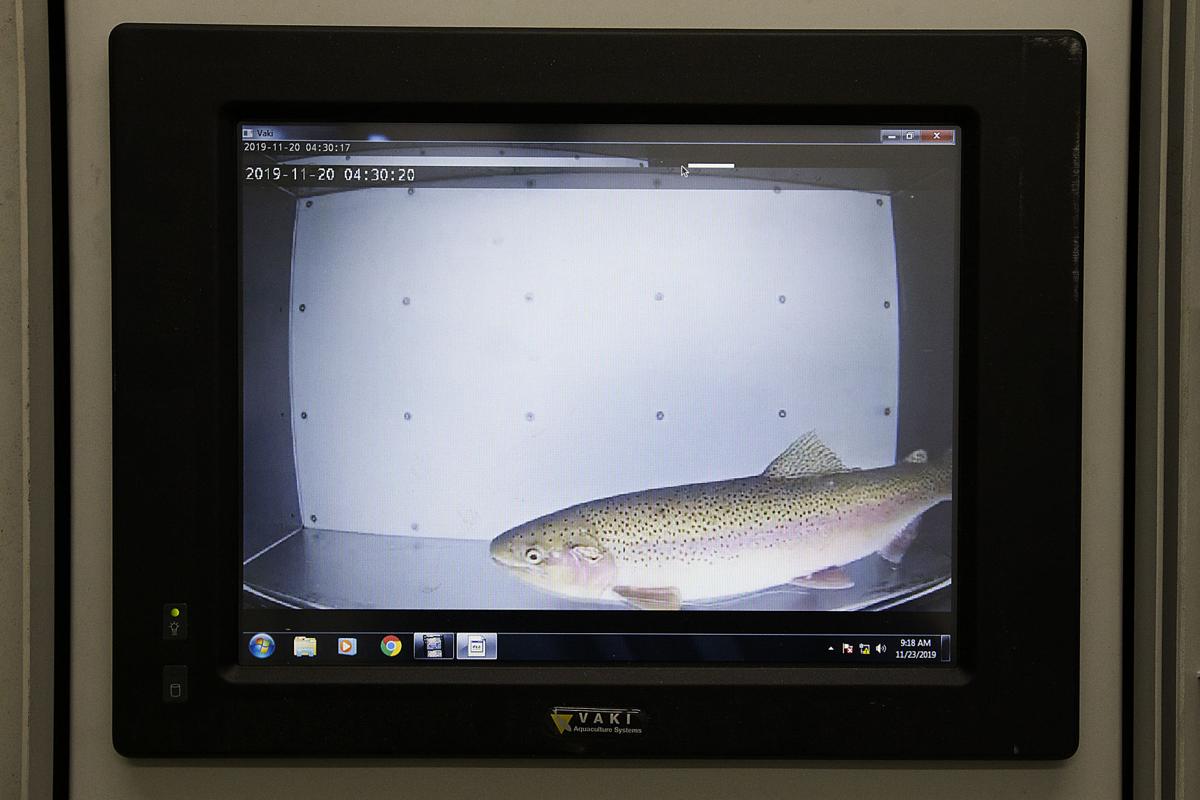 A steelhead was recorded Nov. 20 traveling upstream through the new fish ladder.

Gabriel Havlik, an employee with Deschutes Valley Water District, walks along a section of the recently completed fish ladder at Opal Springs dam on Nov. 23.

Gabriel Havlik, an employee with Deschutes Valley Water District, walks along a section of the recently completed fish ladder at Opal Springs dam in Culver on Nov. 23.

An overview of the Opal Springs dam and the recently completed fish ladder — on the left, along the road.

Gabriel Havlik, an employee with Deschutes Valley Water District, plays a video captured on Wednesday, Nov. 20, 2019, of a steelhead traveling through the recently completed fish ladder while giving a tour of the at Opal Springs dam facility Saturday, Nov. 23, 2019.

A steelhead was recorded Nov. 20 traveling upstream through the new fish ladder.

Just call him Finlay. That’s the name given to the first steelhead to officially climb the newly opened fish ladder at Opal Springs Hydroelectric Project, once a barrier to anadromous fish trying to reach spawning areas in the upper Crooked River.

Finlay — named in honor of the project’s lead consultant, Finlay Anderson — was recorded on a web camera swimming into the current at the final stage of the $11 million ladder and spillway project, according to Joel Gehrett, general manager for the Deschutes Valley Water District, the entity that manages the project.

Finlay struggled momentarily against the current but safely reached the top side of the Opal Springs dam, the first steelhead to get that far on its own in more than 30 years. Other fish, including rainbow trout and whitefish, were also seen making use of the ladder.

The fish ladder project — completed earlier this month after two years of construction — was a long-anticipated milestone for fish making their way through Central Oregon’s network of rivers and streams as part of their life cycle.

Dams, canals and other man-made barriers have threatened numerous fish species in Central Oregon for decades, but the construction of fish ladders like the one at Opal Springs is a key step toward fish recovery efforts.

Before the opening of the ladder, project workers at the site had to manually capture the fish with nets at the bottom of the hydroelectric project and place them back in the river above the dam.

Anderson was humbled upon hearing the news that the first steelhead was named in his honor.

“That’s really cool. I appreciate the gesture, but it’s a testament to the Deschutes Valley Water District who persevered and made it happen. It’s really all about them and it’s a neat story,” Anderson said.

The project is located less than a mile upstream from the Crooked River Arm of Lake Billy Chinook. No ladder was installed when the dam was built in the mid-1980s because at that time natural fish passages were already blocked downstream by the Pelton Round Butte Project.

A $100 million project to improve fish passage and habitat at the Pelton Round Butte Hydroelectric Project improved conditions for fish passage, and adult salmon and steelhead began their return to the Upper Deschutes and Crooked river system.

While some fish made their way up the Deschutes and Metolius rivers, most headed up the Crooked River, according to Brett Hodgson, Deschutes District fish biologist for the Oregon Department of Fish and Wildlife.

“It could be out-migrating smolts are able to move out of the Crooked more effectively than in the Deschutes/Whychus. Thus, there are more adults to return to the Crooked River,” Hodgson said.

Another reason, Hodgson suggests, is the unusual configuration of Lake Billy Chinook simply allows for easier passage up the Crooked Arm.

When they reached the Opal Springs dam, the Deschutes Valley Water District passed fish above Opal Springs through a trap-and-haul effort. The new ladder allows fish to get through unaided.

Gehrett, head of the water district since August, said the team was challenged by some unexpected boulders that needed to be broken up during the construction of the ladder, but engineering aspects of the project were otherwise uneventful.

“There was great coordination between the owner of the dam and the contractors. Unexpected problems were dealt with really well,” said Gehrett, who left his role as head of utility services in Des Plaines, Illinois, earlier this year in order to manage the water district.

While fish ladders can take various forms, the unit at Opal Springs is a gently ascending, water-filled series of steps that doubles back on itself, with 38 shallow pools along the way that give fish a chance to rest on the upward journey.

Discussions around the design and funding of the ladder lasted for more than a decade before the various stakeholders could come to an agreement and raise the necessary funds. The funding sources included $4 million from the Deschutes Valley Water District with the rest coming from state and federal partners.

Permissions were also needed from the Federal Energy Regulatory Commission, the agency that oversees nonfederal hydropower projects in the U.S.

Part of the design required raising the Opal Springs dam by three feet. This allowed the construction of a new spillway chute for smolts. The spillway also delivers more water into the stream, attracting fish to the bottom of the ladder.

The free-flowing aspect of the fish passage is better for breeding and will result in healthier populations of fish, according to fisheries activist Yancy Lind.

“Clearly, it’s working,” said Lind, who helped fundraise for the project. “To reconnect a section of river that has been disconnected for decades is fantastic. It will help increase the genetic diversity of fish in the basin.”

The 4.3-megawatt hydroelectric component of the dam creates power that is sold to Pacific Power’s electric grid. Deschutes Valley’s main business is delivering water to businesses and residences in Jefferson County.

Anadromous fish populations in Oregon have struggled in recent decades, the result of several factors, including dams and inbreeding with hatchery fish. Warming ocean temperatures are another problem, negatively impacting fish populations by reducing food sources.

“The entire Northwest has seen a collapse in anadromous fish migration,” said Lind. “But if just a small number of fish are getting up (to spawning areas), then having a connection between the upper and lower portions of these rivers is fantastic news.”