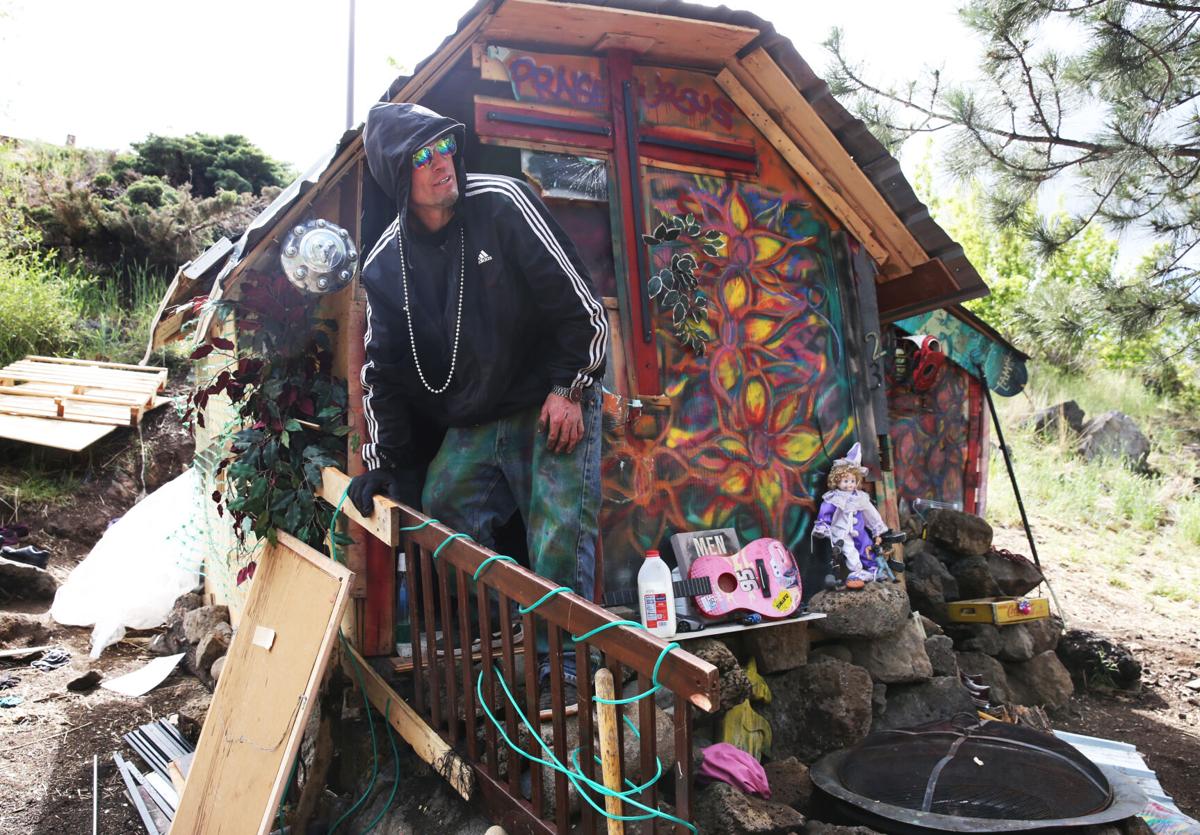 McKinley Morrill prepares Tuesday for the arrival of an Oregon Department of Transportation demolition crew at his home near Revere Avenue and the Bend Parkway. 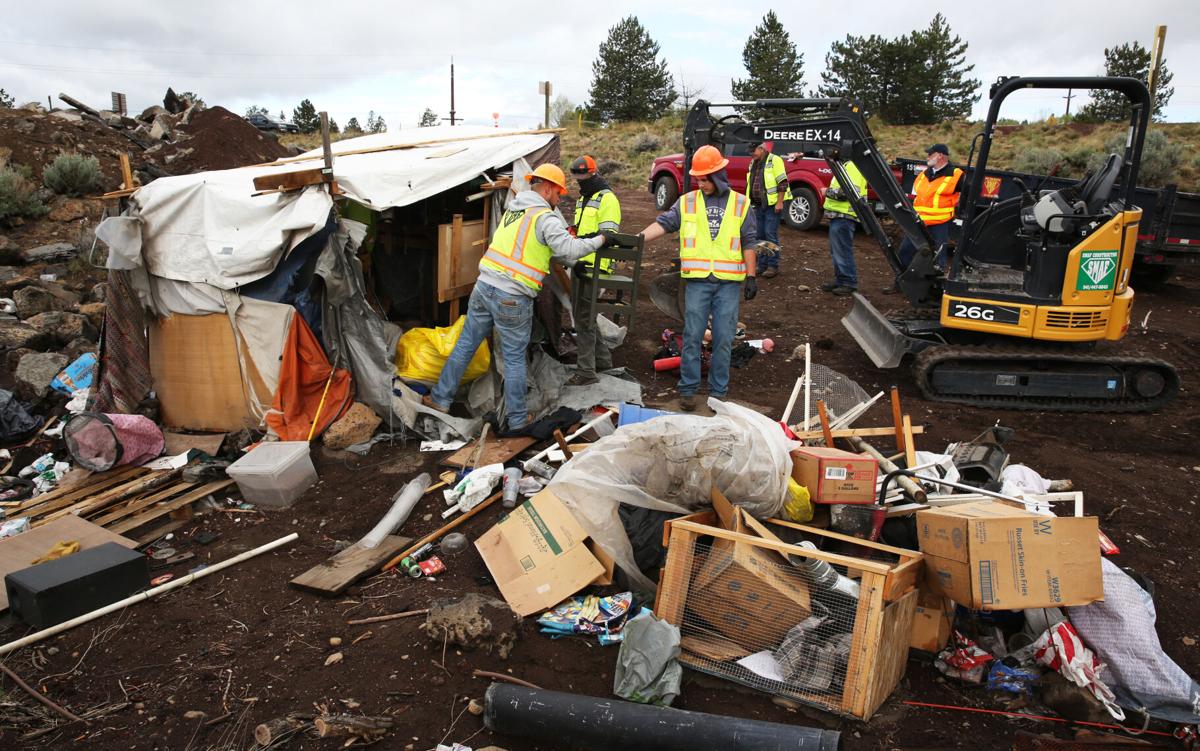 An Oregon Department of Transportation crew removes personal property from a makeshift shelter near NE Olney Avenue and the Bend Parkway prior to demolition Tuesday. 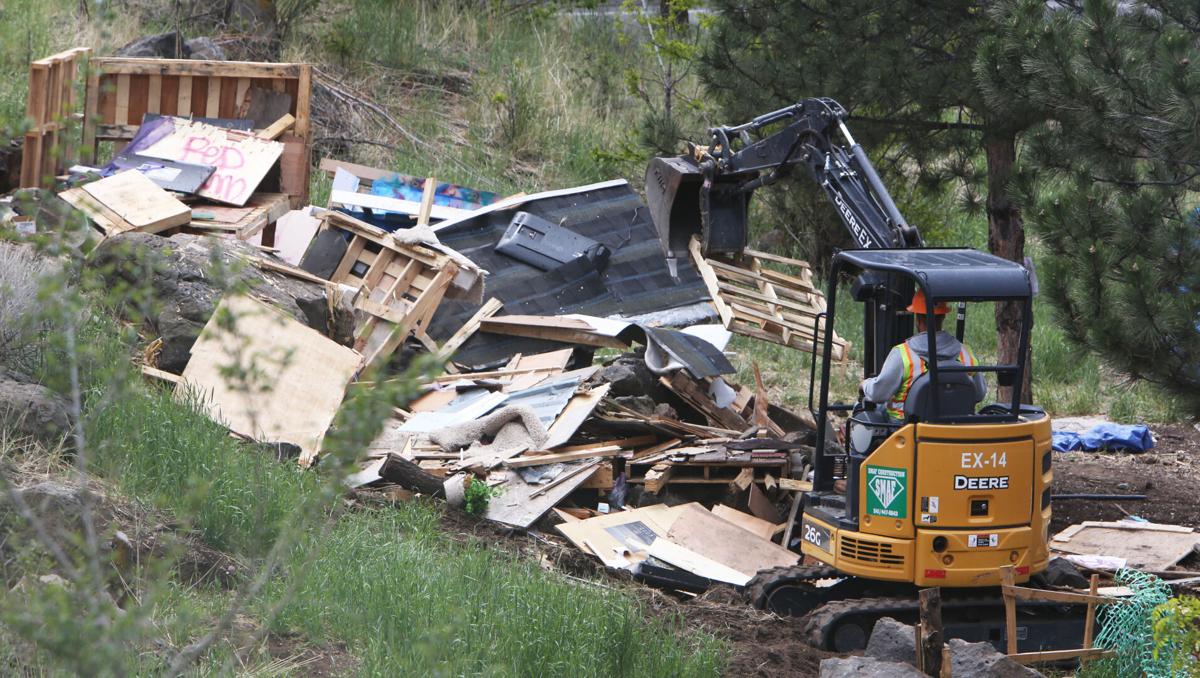 A crew demolishes the home of McKinley Morrill on Tuesday near Revere Avenue and the Bend Parkway. 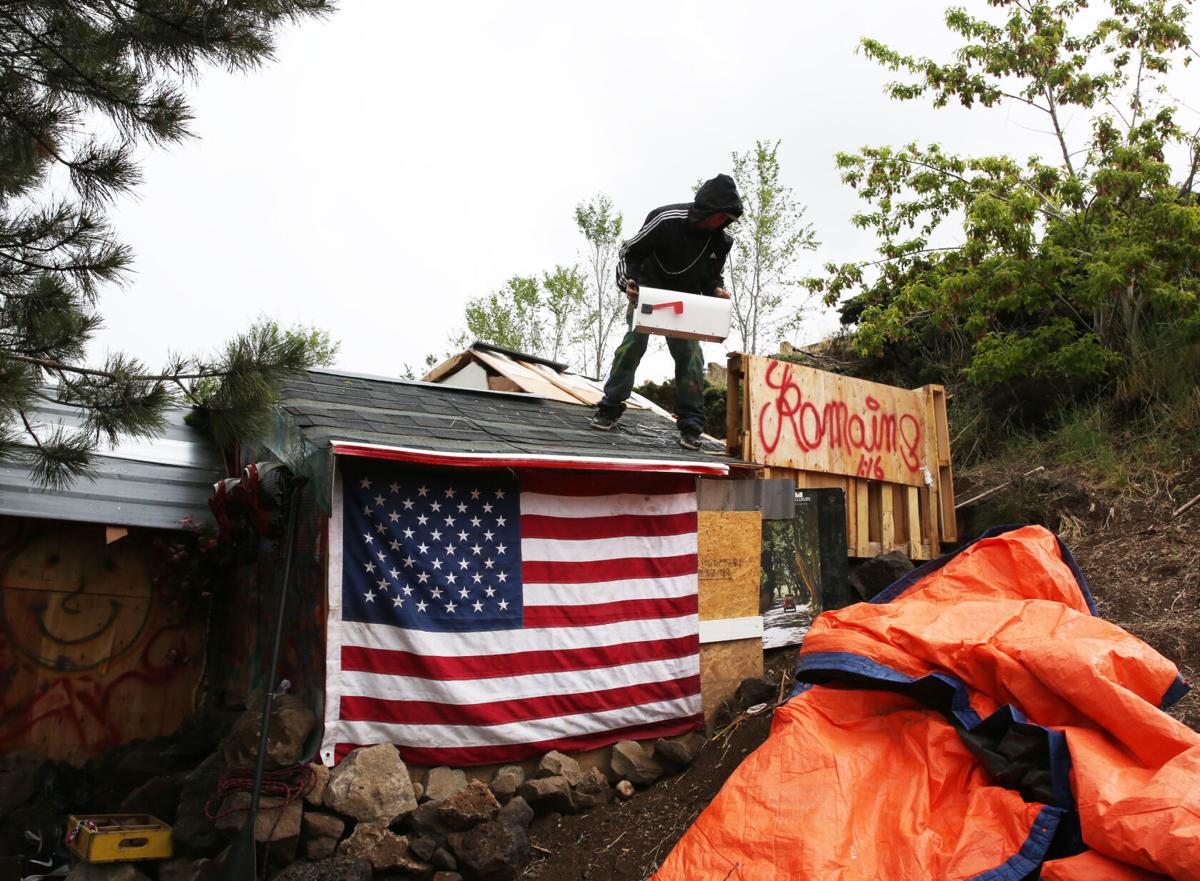 McKinley Morrill hurries to remove personal items including a mailbox from his home near Revere Avenue and the Bend Parkway on May 25 as an Oregon Department of Transportation crew is scheduled to arrive for demolition. 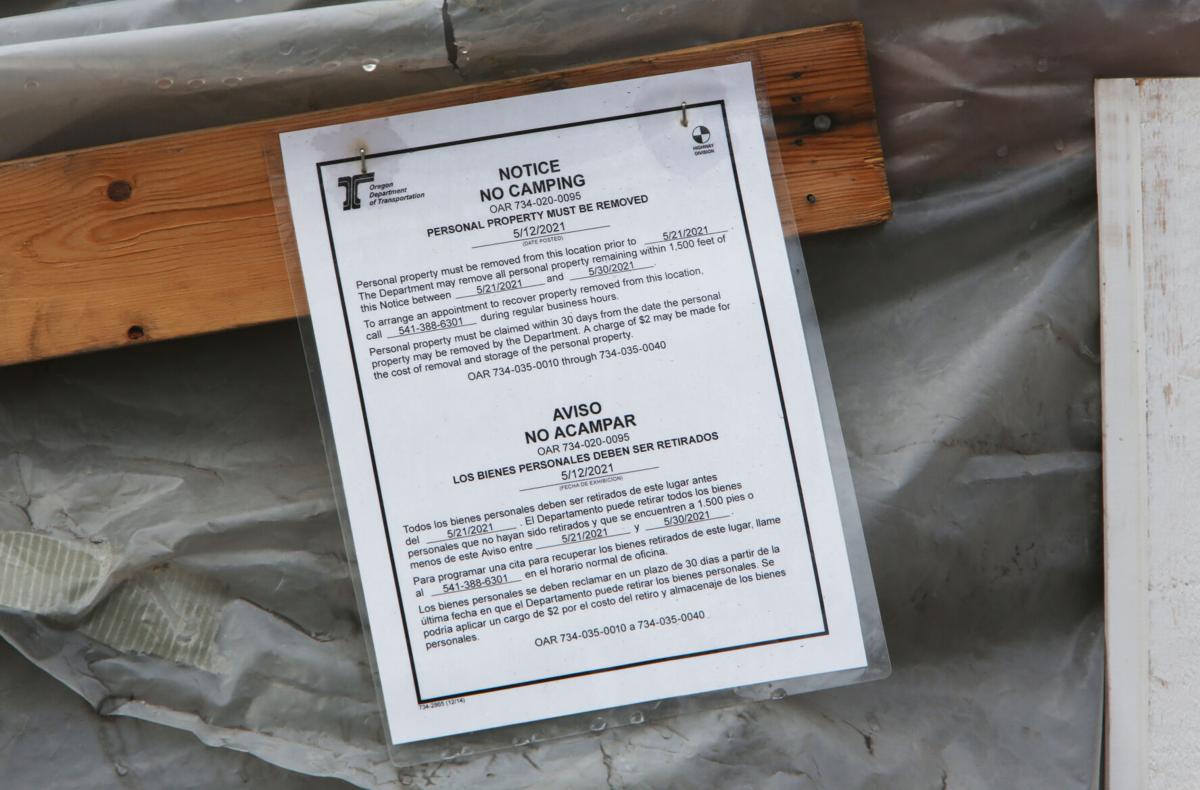 An Oregon Department of Transportation sign warns people to remove their personal property from a make-shift shelter near NE Olney Avenue and the Bend Parkway prior to demolition on Tuesday, May 25, 2021.

McKinley Morrill prepares Tuesday for the arrival of an Oregon Department of Transportation demolition crew at his home near Revere Avenue and the Bend Parkway.

An Oregon Department of Transportation crew removes personal property from a makeshift shelter near NE Olney Avenue and the Bend Parkway prior to demolition Tuesday.

A crew demolishes the home of McKinley Morrill on Tuesday near Revere Avenue and the Bend Parkway.

McKinley Morrill hurries to remove personal items including a mailbox from his home near Revere Avenue and the Bend Parkway on May 25 as an Oregon Department of Transportation crew is scheduled to arrive for demolition.

An Oregon Department of Transportation sign warns people to remove their personal property from a make-shift shelter near NE Olney Avenue and the Bend Parkway prior to demolition on Tuesday, May 25, 2021.

It took McKinley Morrill about a month to create what he called his “oversized club house.”

Nestled into the hillside leading up to U.S. Highway 97 by Revere Avenue, Morrill built a small home out of salvaged materials from a nearby construction company — a structure that looks remarkably permanent compared to the tents and tarps of nearby homeless campers like himself.

He painted the walls a rainbow of colors. He put a cross above the doorway, a reference to his Christian faith. Carefully placed rocks created a stairway.

He prided himself on being able to build it all with just a hammer.

But on Tuesday morning, the 41-year-old Bend man had to start taking it apart. A couple of weeks ago he received a notice from the Oregon Department of Transportation, which owns the land. The house had to go.

“It’s a little bit frustrating because I just completed it and I was looking forward to just relaxing now,” Morrill said Tuesday morning while packing up with a yellow garbage bag. “But it’s not the end of the world.”

Just Tuesday morning two structures, both made of wood with features like doors, were dismantled during clean up efforts at homeless camps near the highway — one structure off Olney Avenue and Morrill’s.

After a conversation with the city of Bend’s code enforcement and fire departments, it was decided that structures like Morrill’s pose more of a fire risk near the highway because they are made of wood products, Murphy said.

“Our recommendation was to focus on sites that present a fire hazard, which can be structures and/or vegetation,” said James Goff, the city’s code enforcement manager, in an email. “They had a few that were in highly vegetated areas.”

And while the agency is not removing people who are camping on its properties at this time, more formal structures need to be treated differently.

“We aren’t in the business of allowing permanent structures on our right of way, Murphy said.

While permanent -looking structures may seem new to those driving through town, it is not an uncommon practice among people who live in more remote areas, like Bureau of Land Management land, said Colleen Thomas, the homeless services coordinator for Deschutes County.

What could be different is that, because of COVID-19 health guidance from the CDC, homeless people are being moved off land less frequently than they would be in normal times.

“People aren’t getting asked to move as quickly as they have in the past, so they want to provide some sense of security and stability,” Thomas said. “I think that might be where some of that increase could be coming from.”

Thomas said she recognized the fire risk that comes with having a structure made of wood near a highway, but also questioned why the conversation around fire safety is often hyper focused on homeless people.

ODOT is treating these structures as personal property, which means the agency is disassembling them and storing the pieces at a secure site for 30 days, per state law.

But more needs to be done, said Jon Riggs, who volunteers with a group called the Street Kitchen Collective to support homeless residents.

“Unfortunately the city council and police in my opinion are not working enough with the professionals who understand this issue to give the proper resources and time to effectively place the people we serve,” Riggs said in a text message.

Morrill’s structure was torn down completely, however, because he gave the agency permission to do so, Murphy said.

For Morrill, building his own home was a way to save money. After a stint in the Deschutes County jail, Morrill fell behind financially because he wasn’t able to work.

In the hopes of saving up money for a car, Morrill decided it would be cheaper to build something from what he could find rather than try to buy a tent or some other form of shelter. In the past, Morrill said he has worked in construction.

“I thought I’d put together something quick that was free,” he said.

Morrill will still be allowed to live on the ODOT property, with a tent that the agency has provided. But Morrill said he doesn’t plan to stay in this position for long.

According to Morrill, the company that let him use the leftover materials for his house recently offered him a job in construction.

McKinley highlights the large percentage of homeless people that have mental problems and need help. Shame on the bend bulletin for featuring a story about a man who trespasses on government property, steaks from a construction site and creates an eyesore for our community. He should go get a job (many of which are available) and live in the low income housing which is helping to overrun our town with Patagonia sporting trendy liberals.

Skittish’s comment has some merit, except the part where he states we know nothing of Morrill’s background so therefore he does not deserve public dollars. But we do know this. People with criminal records have extreme difficulty becoming employed or housed. The public shouldn’t be surprised when felons have trouble with life in general. Read the book “Evicted: Poverty in America” for a dive into a much larger subset of America than we’d like to acknowledge.

Point taken about criminal record. However I am aware that many with criminal records are successful finding employment in the trades. I do think there should be some limits to having to report criminal record, at least in the initial hiring phase and perhaps time limits after getting out. Some professions probably should know before they hire no matter how long ago.

In his July 2020 ruling that expanded protections for unhoused people, U.S. District Court Judge Mark Clarke cited several examples of successful programs developed by partnerships of governments, service providers, and mental health experts. CAHOOTS in Eugene ,e.g., provides "immediate stabilization in cases of urgent medical need or psychological crisis.” A similar program in Miami, FL, reduced the number of people in jail by 49%, saving $12 million per year. Judge Clarke also mentions Hope Village in Medford, which now boasts a 62% success rate. Even with vehement objections from neighboring businesses and property owners, the City of Medford was determined not to duck the issue, but found a new location.

Programs such as these benefit the community by reducing public spending for jails, mental health interventions, and medical treatment, not to mention improving in lives of otherwise vulnerable people. I can’t think of a more worthy investment of public funds.

I agree that does sound good. We can't keep doing what we have been doing and expect better results, but need to verify any changes reduce costs and reduce the many problems associated with this group of people.

Here is an example of how do we choose to view the “homeless”. There are likely at leat half a dozen different ways to interpret this story’s subject. Here’s my quick interpretation. Here we have a working aged male who is single. There is a shortage of laborers for jobs that pay good wages for those without secondary education. He has even been offered a job. We know nothing about his previous mental health, drug use, previous employment, education, values or beliefs. We do not know about his criminal record. Therefore why should anyone like this get any public dollars whatsoever? If he is overall healthy, conscientious and well-intentioned, he should be able to easily get a job in today's job market. So that begs the question, why has he not taken better care of himself and is this our responsibility at all? How many of the homeless could also take care of themselves except for their lack of motivation or personal shortcomings? Is there anything public entities like the City of Bend can do to “fix” this problem?