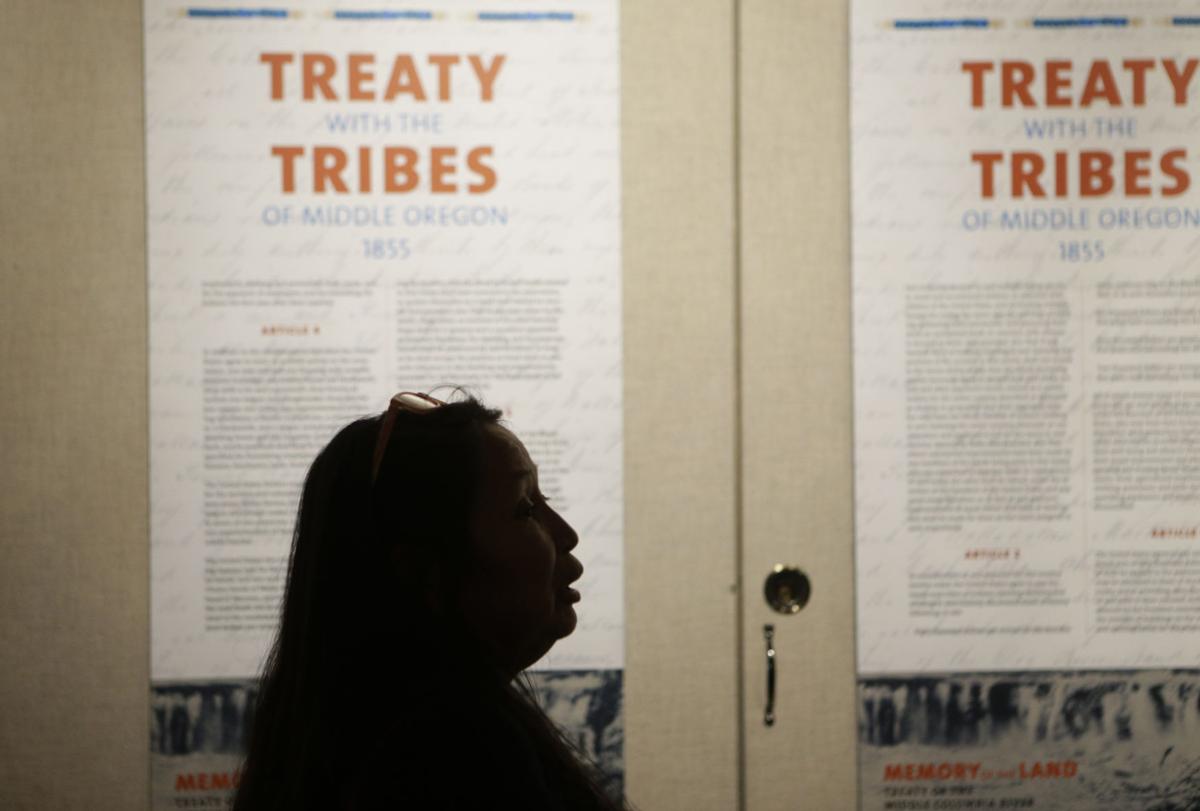 Valerie Switzler, a member of the Confederated Tribes of Warm Springs, talks about some of the history behind the 1855 Treaty with the Tribes of Middle Oregon while viewing the treaty’s exhibit in 2018 at the Museum at Warm Springs. 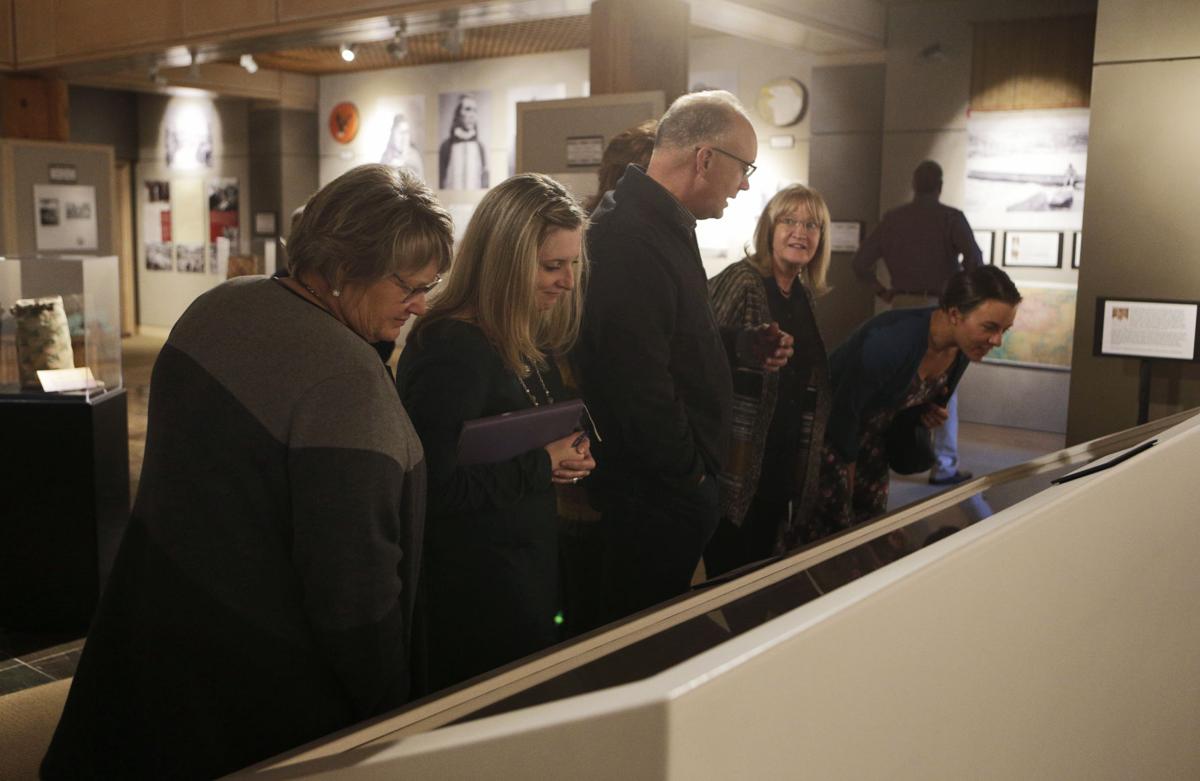 Jefferson County School Board and District Office administrators view pages from the 1855 "Treaty with the Tribes of Middle Oregon," on display on Monday, Oct. 9, 2018, at the Warm Springs Museum. (Joe Kline/Bulletin photo)

Valerie Switzler, a member of the Confederated Tribes of Warm Springs, talks about some of the history behind the 1855 Treaty with the Tribes of Middle Oregon while viewing the treaty’s exhibit in 2018 at the Museum at Warm Springs.

Jefferson County School Board and District Office administrators view pages from the 1855 "Treaty with the Tribes of Middle Oregon," on display on Monday, Oct. 9, 2018, at the Warm Springs Museum. (Joe Kline/Bulletin photo)

Instead of only seeing photographs of the 1855 treaty between the U.S. and two of the three Confederated Tribes of Warm Springs, Jefferson County School District board members and administrators got to look at six original pages of the document, on display at the Museum at Warm Springs.

District leaders, who visited the museum for a tour Monday, said they hope students will also get to see and learn about the treaty in person rather than just read about it in a textbook.

The 1855 treaty, signed by leaders of the Wasco, Lower and Upper De Chutes and Dog River Wasco tribes, along with then-Superintendent of Indian Affairs Joel Palmer, ceded 10 million acres of tribal land to the U.S. to establish the current Warm Springs Indian Reservation. The treaty also allowed the tribes to hold on to their “inherent rights” to hunt, fish and gather, and helped create education, health and career and technical careers at the reservation, according to Tribal Council member Valerie Switzler, who led the exhibit tour.

Switzler said that one of the three Confederated Tribes of Warm Springs, Paiute, did not join the reservation until 1879.

Switzler, who is also a member of Warm Springs’ Culture & Heritage Program, introduced herself to the district leaders Monday night in the Kiksht language, spoken by the Wasco people. She later told the district leaders that educating tribal students in all three languages spoken by the tribes — Kiksht, Ichishkiin and Numu — was critical in maintaining their heritage.

“The reason why we work so hard to revitalize the language is because not only does it hold our songs, it holds our prayers, it holds the sense of who we are and the connectiveness that we have to each other,” Switzler said. “It was something my grandmother had told me, not to let the language slip, because it’s who we are. The creator gave us this language, our songs, our way of life, and you cannot let that die.”

In September, the school board approved the 21st Century Community Learning Centers grant worth $500,000 annually for the next three years and $375,000 annually for two years after that, which will partly be used to fund classes at Warm Springs K-8 Academy, in which students can learn all three languages spoken by the Confederated Tribes.

After speaking to the group, Switzler said she appreciates having the district learn about the treaty, and remarked that relations between the tribes and the school district have improved in recent years.

“It used to be that when we were farmers and ranchers together, that there was a real connection, but we lost that connection for a little while,” she said. “But now that we’ve got this new school board, new superintendent, those relationships have been built again. That’s what excites me; we get to have a committee and a superintendent who realize the importance of our culture and our language and who we are as Indian people.”

Danzuka agreed with Switzler, and added that “it hasn’t been easy” to build that relationship.

“There’s been a lot of misunderstanding, not intentional, but just that gray area where they don’t want to step on our toes, we think they need to learn more to understand where we’re coming from,” she said.

After learning about the treaty, board chair Courtney Snead called the exhibit, which also featured various tribal artifacts, “beautiful.” She said learning about Warm Springs’ history was crucial in cooperating with the tribes and educating their students.

“I think about colonization, and I think about how these people were sold a bill of goods that maybe weren’t so great under pressure of maybe not having alternative options,” she said. “As a board member, I think about how it’s part of our role as policymakers for our education system … to help make good on ensuring that we are delivering good education, and we are doing everything we can to support youth and families.”

According to Superintendent Ken Parshall, about 35 percent of Jefferson County School District’s students live in the Warm Springs region.

Carol Leone, the museum’s executive director, said the treaty was brought to Warm Springs from the National Archives in Washington, D.C., after a year of communication with the agency. The treaty will be on display for the public from Oct. 2 until Nov. 3.

Danzuka encouraged locals to come and see the treaty before it returns to Washington.

“It’s an incredible opportunity,” she said. “I don’t think people realize it’s here, and they should come and take advantage of it, and be able to feel a part of it.