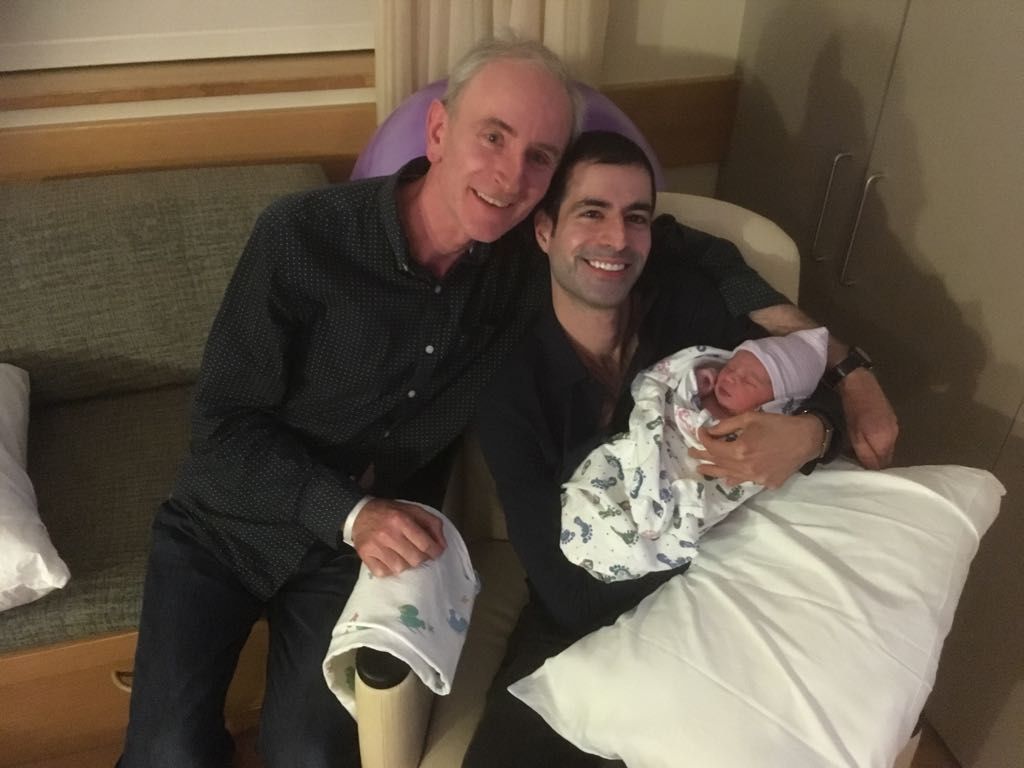 Peter Maguire (left) and his partner, Sorab Shroff, hold their daughter, Colette, moments after she was born Sept. 11.(Submitted photo) 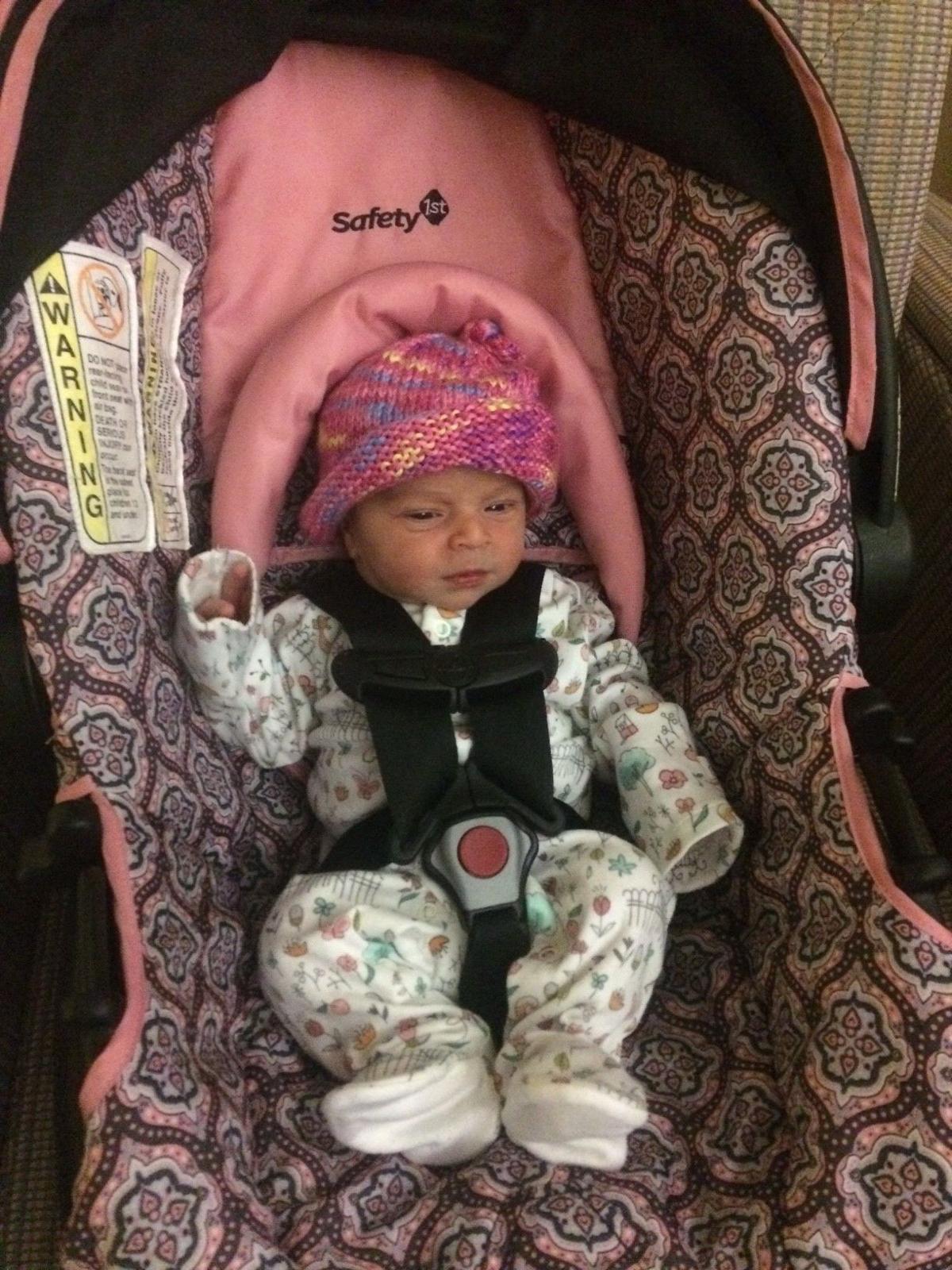 Colette Maguire-Shroff was born Sept. 11 in Bend through a surrogate. (Submitted photo) 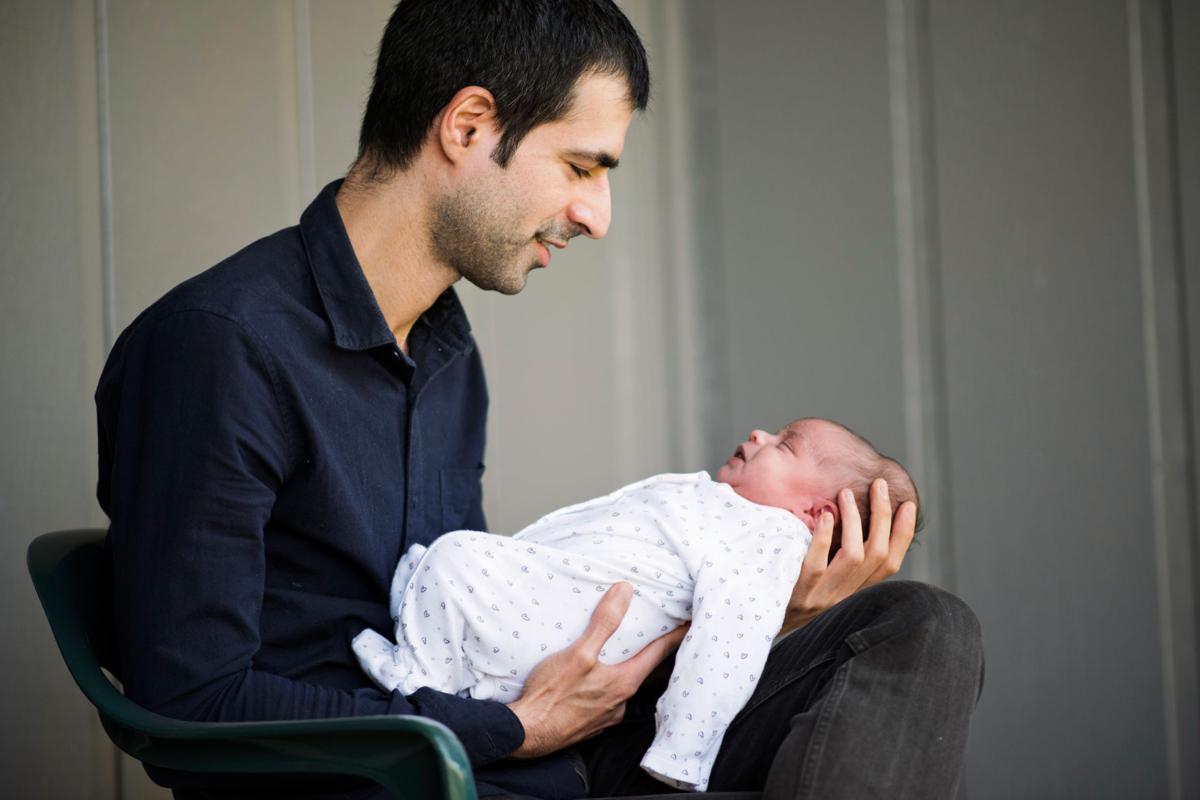 Sorab Shroff holds his newborn baby, Colette, outside the home where he and his partner, Peter Maguire, have been staying in Bend. Shroff and Maguire, who live in London, had Colette through a surrogate. (Joe Kline/Bulletin photo)

Peter Maguire (left) and his partner, Sorab Shroff, hold their daughter, Colette, moments after she was born Sept. 11.(Submitted photo)

Colette Maguire-Shroff was born Sept. 11 in Bend through a surrogate. (Submitted photo)

Sorab Shroff holds his newborn baby, Colette, outside the home where he and his partner, Peter Maguire, have been staying in Bend. Shroff and Maguire, who live in London, had Colette through a surrogate. (Joe Kline/Bulletin photo)

A London couple recently traveled all the way to Bend to start a family. Sorab Shroff, 39, and his partner, Peter Maguire, 55, found a surrogate in Bend two years ago, and she carried their first child, Colette, who was born Sept. 11 at St. Charles Bend.

An international couple seeking surrogacy in Oregon is not unusual. The state has become a popular destination for couples from around the globe who are pursuing surrogacy.

Surrogacy is an arrangement in which a woman agrees to become pregnant and gives birth to a child for a couple who will be the child’s parents. The surrogate carries an embryo created in a laboratory using an egg and sperm from the child’s parents. In their case, Shroff and Maguire used an anonymous egg donor.

Oregon has no government regulations that hinder the surrogacy process and has gained a reputation of having top fertility clinics and a strong network of lawyers to navigate contracts, according to Carrie Ramoz, marketing manager at the Portland-based Northwest Surrogacy Center, the largest agency in the West.

The number of babies born each year in Oregon through Northwest Surrogacy Center has grown steadily from 58 in 2014 to 146 in 2017. Last year, the agency — which has offices in Denver and San Francisco — had 187 births and helped couples from 28 countries.

Ramoz expects the agency to help just as many international couples this year. The numbers haven’t been tallied yet, but Ramoz said it appears the agency will again help couples from at least 28 countries.

“It is very similar,” she said. “We are working with many families from the U.K., too.”

Pursuing surrogacy was a long road that ultimately led Shroff and Maguire to Oregon.

Shroff, a digital product manager, and Maguire, a social worker, have been together for 21 years and started researching how to start a family about 14 years ago.

In that time, the couple faced multiple hurdles and grew discouraged.

Adoption felt too time-consuming and bureaucratic, and surrogacy is illegal in many European countries, Shroff said. In the United Kingdom, there are no clear laws around surrogacy so there is a risk a surrogate could keep the child.

Surrogacy in the United States was attractive to the couple, but too expensive at the time. They estimated it would cost them about $100,000 for the process: in vitro fertilization, surrogacy, legal costs and travel expenses.

“We put aside the idea at the time, and it was quite a difficult thing to come to terms with,” Shroff said.

Four years ago, the couple started saving the money for surrogacy by refinancing their home. They eventually found an agency in Maryland, and connected with Bend resident Natalie Naylor, who signed up through the agency to become a surrogate. Naylor has two children, a 5-year-old son and 3-year-old daughter, and wanted to help a couple in need, she said.

Shroff and Maguire met Naylor in person about two years ago to make sure the arrangement would be a good fit.

“We spent a whole week with her and met her kids,” Shroff said. “The whole point of it was she gets to know us and we get to know her.”

Shroff and Maguire selected the egg donor with the help of a fertility clinic. They read profiles from the donors before choosing. “Peter and I picked a donor who talked about her belief in being kind and her close links to her family,” Shroff said.

About five months into Naylor’s pregnancy, the couple visited Bend again to be there for a doctor’s appointment.

The process culminated with the birth of Colette. They were in the hospital room with Naylor when their daughter was born.

“For them, it’s been such a long process,” Naylor said. “I can only imagine how surreal it was to be at the finish line with their daughter.”

But as welcoming as Oregon is to surrogate couples, ignorance about the process surfaced during the couple’s Uber ride home from the hospital.

The couple relied on Uber, the ride-sharing service, to get around Bend while they were in town. The morning after their daughter was born, they contacted an Uber driver to pick them up from the hospital. According to the couple, the driver arrived and rudely asked, “Where’s the mother?” Later, the driver said to a nurse helping the couple, “Well, neither of them gave birth, did they?”

It was a short trip back to their rental apartment, but it ruined a special moment, Shroff said.

“I felt really sad that our daughter’s first journey out of the hospital was that kind of situation,” Shroff said.

The couple spent the next two weeks in Bend taking their daughter on walks in a stroller along the Deschutes River, and enjoying their new life as parents. They’ve had mostly positive interactions with people, who stop and smile when they see the family together. Those encounters have helped wash away the memory of the Uber ride, Shroff said.

After returning home to London, the couple has plans to take their daughter to meet Shroff’s family in India and possibly make a trip to Ireland to see Maguire’s family. Among all the travel plans will be another trip back to Bend in a few years to show their daughter where she was born.

I’m glad that more and more countries conduct various reproductive procedures abso-lutely legally. And women don’t put themselves in risk. From my personal experience, I can say that examine the information in the Internet resources and you will see that for example, Ukrainian centers of reproductive medicine gain momentum. Ukrainian doc-tors use fresh eggs during the IVF procedures. And therefore receive positive results with a minimum number of attempts. I underwent a program in one of the Ukrainian clinics. The price as for me is very acceptable compared with other clinics. It is only 50K euro for unlimited attempts, meals, transfer in Kiev, translator, accommodation, treat-ment, medication, consultations and so on. I didn’t find any more clinics which provide such programs. As for surrogates, we hadn’t a chance to choose her. The doctor told us, that we can choose surrogate taking into account only her appearance. It doesn’t matter how she looks like. She hasn’t any genetic relations with a child. But the im-portant thing for bearing a child is healthy and medical indications. And it was the right decision.

Once I started to look for a country where we can start the IVF program. And I must say that I was pretty disappointed. In the US and Canada, prices weren’t affordable for us. So we began to consider the eastern part, Russia and Ukraine. Due to the economic factor, which was very important for us, we decided to trust to the Ukrainian clinic bio-texcom. There are numerous reliable facilities but our choice fell on it. We undertook the adventure and went directly to Kiev, where we were met in a wonderful way. This is also a private clinic. This center for human reproduction gave us a guarantee of a successful result by using only fresh material. So after the second attempt, I became pregnant. Ukraine has an opportunity to work with fresh material. Hope in the nearest future Europe will have the same one. Then it will be possible to welcome thousands of infertile couples. But now I’m grateful to this clinic and donor for my son. I’m the happiest person in the whole world!