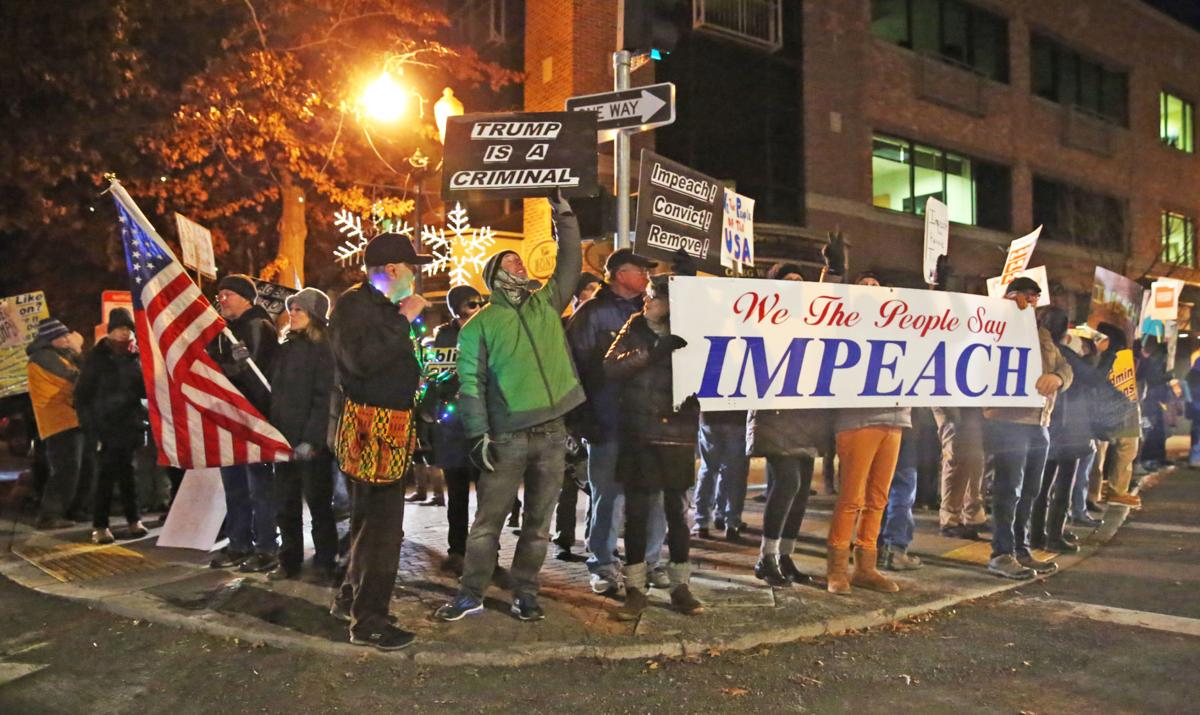 Hundreds of people gather in downtown Bend in support of an impeachment vote against President Donald Trump on Tuesday, Dec. 17, 2019. 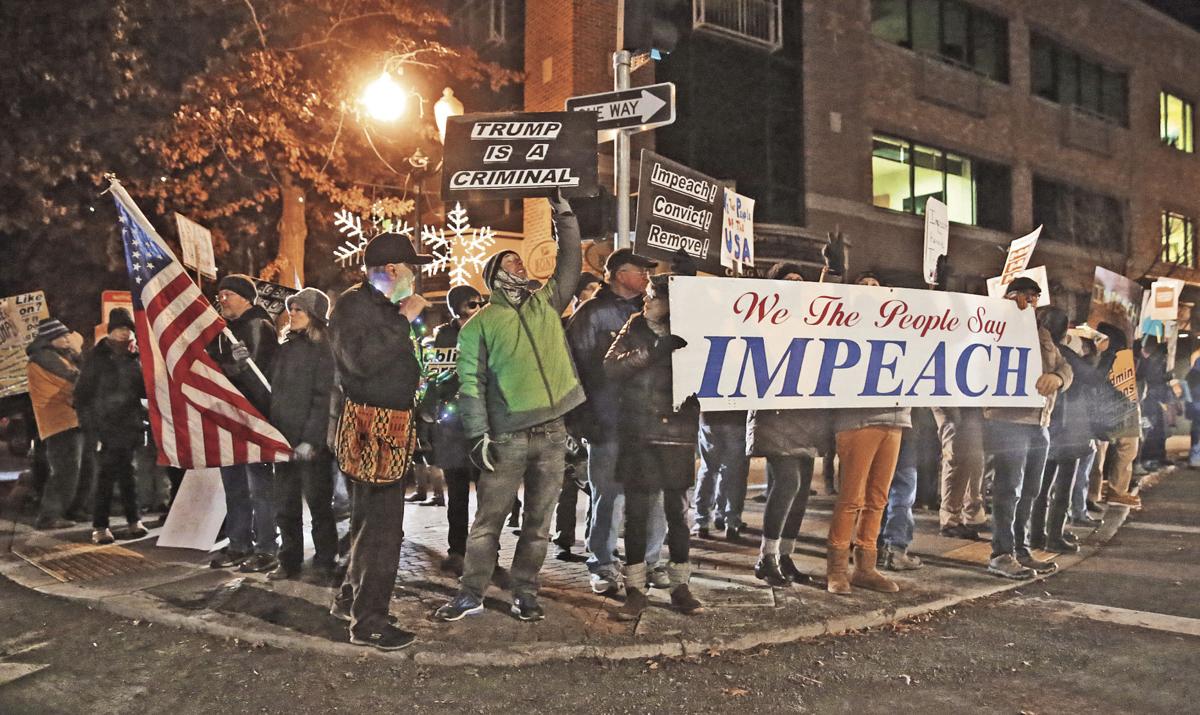 Hundreds of people gather in downtown Bend Tuesday in support of an impeachment vote against President Donald Trump.

Hundreds of people gather in downtown Bend in support of an impeachment vote against President Donald Trump on Tuesday, Dec. 17, 2019.

Hundreds of people gather in downtown Bend Tuesday in support of an impeachment vote against President Donald Trump.

Hundreds of people packed every corner of a downtown Bend intersection Tuesday evening to join protesters nationwide in support of an impeachment vote against President Donald Trump.

They lined Greenwood Avenue and Bond Street, packing all four corners where the streets intersected, waving signs at commuters who honked back in support. There was no formal counterprotest, but the driver of one large pickup truck revved its engine, briefly filling the intersection with thick black exhaust.

The No One is Above the Law event was held on the eve of the House of Representatives’ vote to impeach Trump.

Andrea Naitove, a retiree from Bend, said she has been to previous anti-Trump rallies and wasn’t going to miss this one.

Marcia McCullough, of Bend, brought her dog Huntley, a black cocker spaniel, to the protest.

“He is in office only to profit,” she said of Trump. “He doesn’t think about the American people at all.”

The protesters were bundled against the cold, but the weather did not dampen their enthusiasm as they waved signs and banners: “We The People Say Impeach,” “Impeach! Convict! Remove!” and “All I Want for Christmas Is Impeachment.”

Do you believe President Donald Trump should be impeached?

Historic day today if Congress votes for the Big Impeach of Mr. Trump. Third one in my lifetime. Never thought I'd see one for a traitor.

My thought for the protesters. Go back to California and leave us Oregonians alone.

A trained statistician counted the crowd twice at its peak, over 500 people both times . No photo shopping , just concerned Americans standing up for democracy.

Bulletin nice job with the photoshopped picture. I was downtown during the rally and didn't see hundred supporters, maybe 50 at best. And the signs they carried looked nothing like the photo.

Talking to the impeachment supporters after their flash rally it seems they were all government workers or retirees. Could it be that the rally was more about keeping the Washington swamp populated with their racist left friends than anything Trump has done? After all we know Bend is known for it's lack of diversity founded in racism but the rally supporters still choose to live in and support Bend.

I drove through downtown, saw at least several hundred protesters and many of these exact signs.... Please stop trying to undermine our local media with your loony tune conspiracy theories and toxic hatred.

I drove through downtown and saw hundreds of protesters and many of the exact signs in this photo... Please stop trying to undermine our local media and enough with the conspiracy theories!

Considering the size of the population of Bend the turnout isn’t very impressive. There are far more people sitting at home who do not agree with the protesters but who don’t interfere with their right to protest.

As you note freedom of speech is important. As to how many agree I guess we'll see in November.

Where is the Pro-Trump rally? Using your logic,, despite the population, no one in Bend gives a ***** about Trump to counter protest or set up a protest of their own against the impeachment. Guess Bend is tired of the constant chaos, lying, and childish acts of Trump.