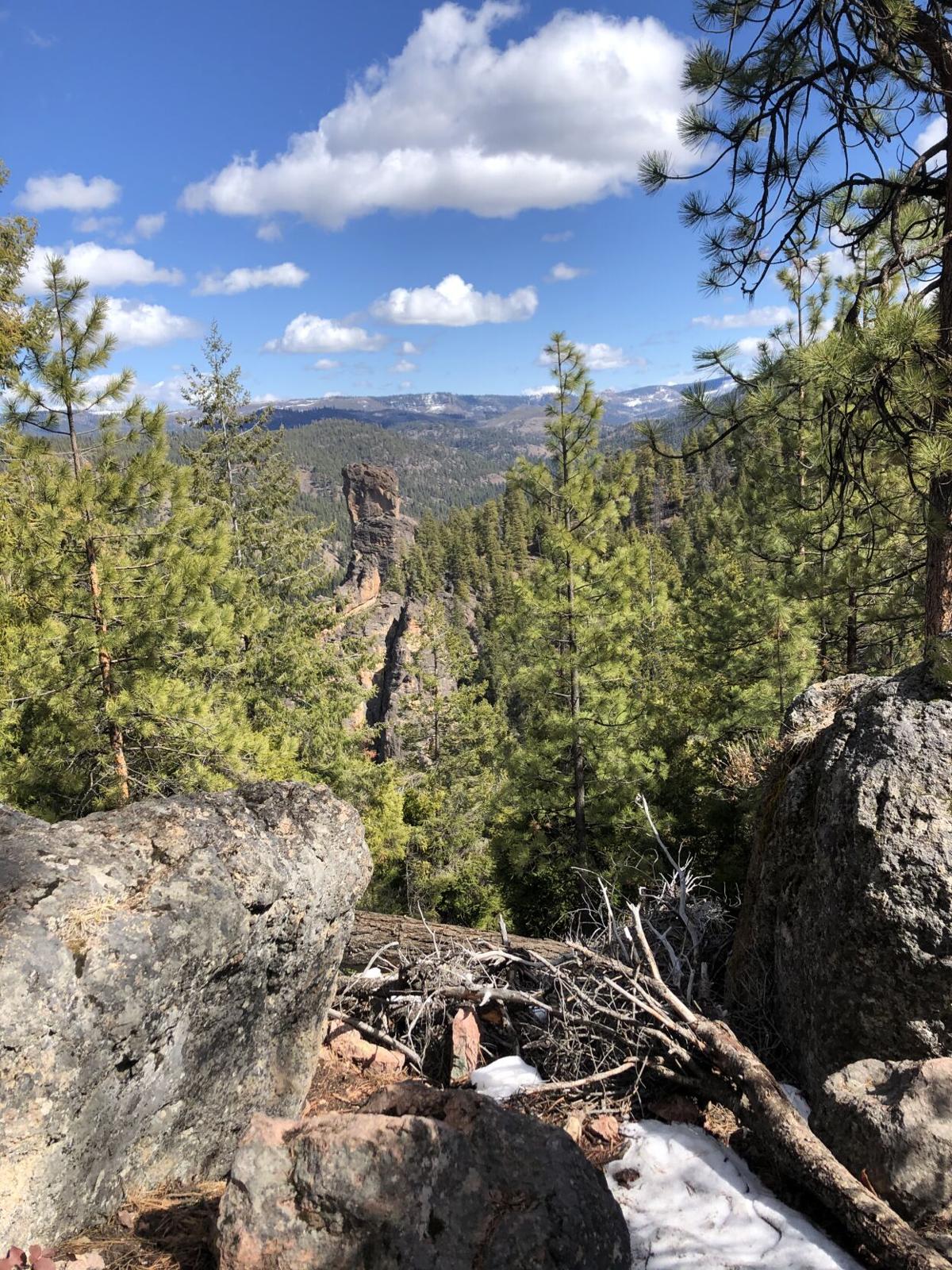 Stein’s Pillar rises 350 feet above the surrounding forest floor, as seen from the nearby viewpoint. 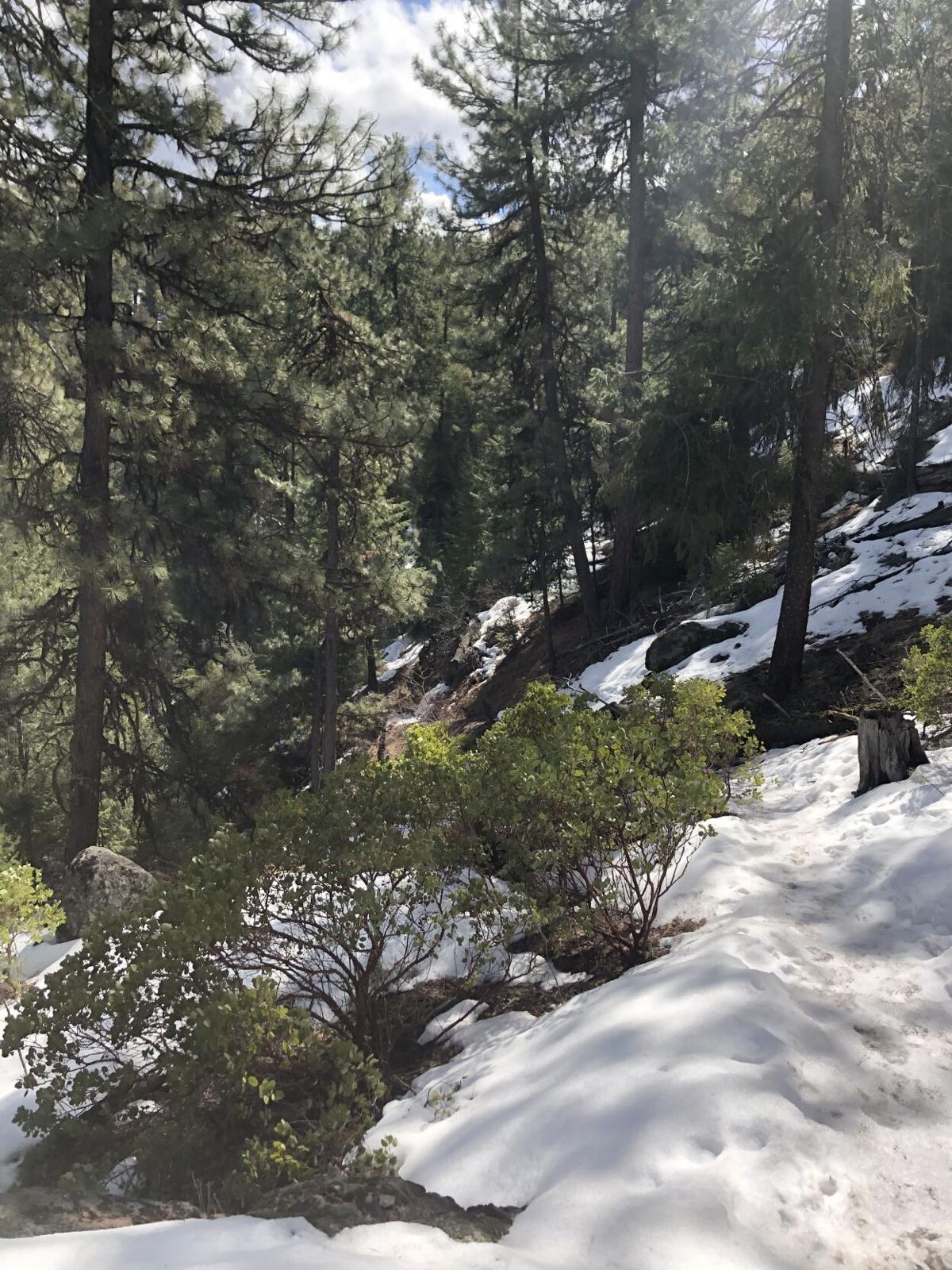 As of two weeks ago, snow covered the steep downhill final descent to the base of Steins Pillar. 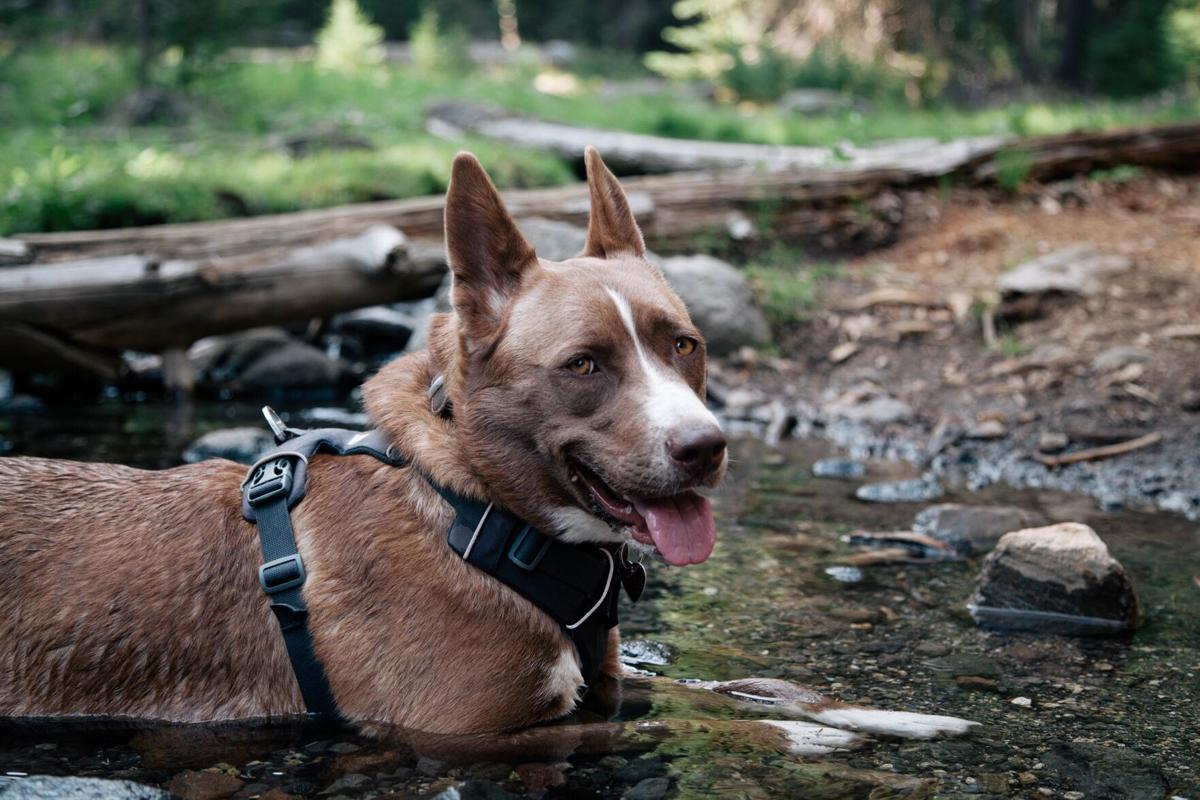 Emily Doerfler and Philip Aulie adopted their dog, Wichita, a year ago from the Madras Humane Society. “She’s a mixture of a bunch of stuff,” Doerfler said. “One of these days, we’re going to do a DNA test to figure it out.”

Stein’s Pillar rises 350 feet above the surrounding forest floor, as seen from the nearby viewpoint.

As of two weeks ago, snow covered the steep downhill final descent to the base of Steins Pillar.

Emily Doerfler and Philip Aulie adopted their dog, Wichita, a year ago from the Madras Humane Society. “She’s a mixture of a bunch of stuff,” Doerfler said. “One of these days, we’re going to do a DNA test to figure it out.”

On a sunny Friday two weeks ago, my oldest daughter, Caroline, and I drove east from Bend to Prineville to hike the Steins Pillar Trail.

It was a mostly sunny day, cool but not cold, perfect for a 4-mile round trip trek through a picturesque section of forest.

But if spring can be counted on for one thing, it’s “springing” surprises on you.

From sunny one minute to a brief but impressive snow storm, from dusty-dry trail conditions to blobby sections of snow lingering on shaded or north-facing trails, spring will smile in your face while it picks the hope from your pocket.

No, I’m not much of a winter person. That works to my disadvantage several months of the year — for instance, the day before our hike, when my colleague Makenzie Whittle warned that we might encounter still-snowy trails, but I thought, “Meh, spring usually comes earlier to the Ochocos than the Cascades. How much could there be?”

Guess which one of us was right?

As we drove in, Caroline talked about what to do in the event we saw a cougar.

This was triggered, in part, by my mention of a 2006 piece by longtime Bulletin outdoors writer Jim Witty, who died in 2008. For some reason, the paranoia-inducing piece induces Ochocos paranoia in me to this day.

It began: “I have the eerie feeling I’m being watched. I’m hiking solo, pushing up the trail toward Steins Pillar, my senses heightened by the lack of human discourse and an underlying hunch that I am not alone out here in the Ochocos. And, of course, I’m not.”

Gee, thanks, Jim! Along with the unforgettable lead, I’d also recently received an email from a hiker who’d had a close encounter with a cougar in this area a few weeks ago.

Our first taste of snow came as we drove the two miles up Forest Road 500 to the trailhead, a fairly rugged 2-mile stretch, some of it still slick with packed snow and ice, to the trailhead. I marveled that, years ago, we used to do these kinds of drives in a Toyota Sienna, a great van for a family of five on paved roads, less so on unpaved and rutted forest roads miles from the nearest mechanic. Fortunately, the RAV we drive now did just fine.

Expecting the trail to display summer’s mercy when the road hadn’t was Pollyannaish, but proceed we did, Caroline advising me about what to do in the event we ran into a cougar. I half-listened as I drove the last little bit to the trailhead parking area, where there was just one other car.

Previous visitors had kindly left several primitive walking sticks leaning against a sign at the trailhead, and I opted to grab two of them, using them like poles. Though sunnier sections were summer-dry, I don’t think we were more than a quarter-mile from the trailhead before we started hitting little patches of sun-softened snow.

And then we came to a patch with some very large, very fresh-looking paw prints.

“Are those cougar tracks?” Caroline asked me.

Now let me just say up front that I was raised in a large Southeastern city and have absolutely no business rendering judgment on tracks, although my high school mascot WAS a cougar. Other than that, my experience with them is limited, and, I wish I’d snapped a photo but denial has funny affects on a person.

“It’s just a dog,” I answered, and noted the sole vehicle we’d seen parked. “Probably those people’s dog.” Never mind that our midsized dog’s prints were a fraction the size of the ones we saw.

Then we ran into those people, a friendly couple by the names of Bob and Raven. I noticed right away We chatted with them for a while a little farther down the trail, Bob warning us of the snow, especially bad closer to the final descent to the pillar.

“Did you see the cougar tracks?” he asked.

Caroline was vindicated. I was chagrined. Paranoia was transmuted into fear.

The Oregon Department of Fish and Wildlife notes that their are some 6,000 cougars living in Oregon. Though encounters are rare, the ODFW offers tips for preventing a cougar encounter:

— Hike in groups … and be noisy about it.

— Keep your dog leashed. Free-roaming pets can draw cougars to you.

— Don’t feed the wildlife. (That should be a no-brainer, but I once witnessed a man holding out raw chicken to a very wild alligator at a park in Miami.)

And in the event you do these things and nonetheless encounter a cougar, the ODFW advises:

— Pick up your children. Don’t turn your back on the cougar, and don’t stoop to do it.

— If the cougar seems aggressive, raise your arms and try to appear larger. (How you’re supposed to do that while holding your child is not addressed in the ODFW literature.)

— If a cougar does attack, fight back. The ODFW recommends you carry bear spray, but be aggressive and weaponize whatever is at your disposal: rocks, sticks, tools.

It could happen to you

A few days after our hike, I got in touch with Emily Doerfler, the emailer who’d had the cougar encounter while hiking at a nearby trail with her rescue dog, Wichita, on March 7. “Rescue dog” is particularly apt, because in this case, their dog may have rescued Doerfler and her boyfriend, Philip Aulie.

Doerfler and Aulie were hiking to nearby Twin Pillars — half the size but double the fun of Steins — also in the Mill Creek Wilderness.

Unlike Jim, Caroline or I, “We had no idea. We didn’t feel eyes on us. Neither of us were paranoid in any way, shape or form,” Doerfler said. “It’s probably because we’re huge idiots, because on the trail, we’d seen tracks, and I was like, ‘Oh, look, these dog prints are different than our dog Wichita’s. That’s funny — look how different they are.’ I didn’t even put it together in my head that those are cougar tracks.”

Another sign they didn’t take much notice of: a freshly gnawed deer leg Wichita found beside the trail.

And then they came to the point when Wichita became stock still, then bolted after a cougar only 20-25 feet in front of them, Doerfler said.

“We didn’t even see it until she was chasing it,” Doerfler said. “The fact that we didn’t ever see it until then is just crazy to me. … She just kind of froze up on the trail for a

second, and then bolted, kind of behind a bush and then started chasing it up the hill. We didn’t see it until it was running.”

They dashed up the hill after Wichita and the cougar, she said, Aulie getting a ways ahead of her.

“I didn’t actually see the cougar treed, he did. We were on the hill screaming at Wichita to ‘Come back, come back,’ because she was kind of putting her paws up on the tree where the cougar was. Luckily, she listened and came back, and then we scrambled back down the hill.”

They made a great deal of noise “so it wouldn’t follow us,” she said. “We were frantically watching the trees and the trail trying to get out of there as quickly as possible.”

Deterred by the snow and the apt trail conditions warning we’d heard from Bob and Raven, Caroline and I made it no closer than the viewpoint located above the last descent to the base of Steins — close, but no pillar.

Still, it made for a good lunch and photo spot, even if I was constantly glancing around the rocky perches and nooks. We’ll have to save reaching Steins Pillar for a return trip, hopefully sooner than later — with a large group of tall, long-armed loud people.

For their future hikes, Doerfler and Aulie are considering buying a baton that emits noise and has an electrified zapper on one end.

“We’re looking into gadgets, but I don’t think I’ll be going out anywhere that remote for a while,” she said, laughing.

When she does, she’ll have along Wichita.

“Oh yeah,” Doerfler said. “She was amazing. We just feel so lucky that she just bolted right into action wanting to protect us. That’s so cool.”

Getting there: From Prineville, travel east 9 miles on U.S. Highway 26 to Mill Creek Road (Forest Road 33). Travel northeast for 6.5 miles. Turn on Forest Road 3300-500 and continue to signed trailhead.