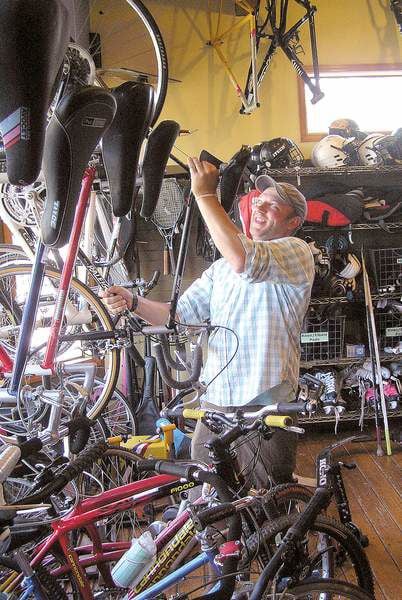 Joshua Sims, owner of Repeat Performance Sports in Bend, hangs a bicycle in his store, where he sells used equipment for a variety of sports. Skis, snowboards, kayaks, life jackets, baseball mitts, boxing bags and climbing gear are among the items on hand, and are sold at a fraction of the original retail price. 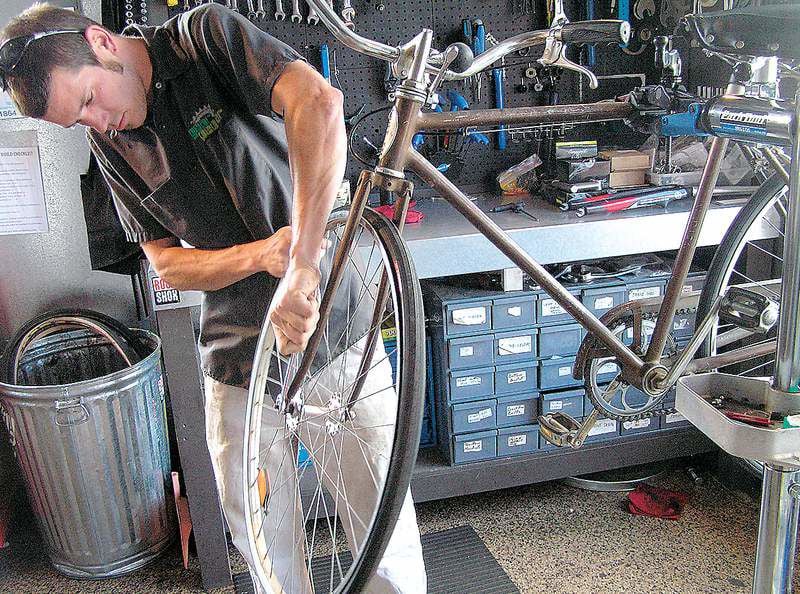 Nick Braun, a bike repairman at Gear Peddler in Bend, replaces a bike tube Wednesday on the wheel of a classic five-speed Schwinn road bike. In addition to selling new and used sports equipment, the Gear Peddler has a full service shop for setting up and repairing bike and ski equipment.

Joshua Sims, owner of Repeat Performance Sports in Bend, hangs a bicycle in his store, where he sells used equipment for a variety of sports. Skis, snowboards, kayaks, life jackets, baseball mitts, boxing bags and climbing gear are among the items on hand, and are sold at a fraction of the original retail price.

Nick Braun, a bike repairman at Gear Peddler in Bend, replaces a bike tube Wednesday on the wheel of a classic five-speed Schwinn road bike. In addition to selling new and used sports equipment, the Gear Peddler has a full service shop for setting up and repairing bike and ski equipment.

Joshua Sims got the idea for his business, Repeat Performance Sports, by hanging out at the dump.

Sims said he couldn’t get used to seeing perfectly good bikes, skis and other sporting goods being buried in landfills when he made dump runs for the outdoor outfitters he worked for. So in 2007, he opened a store to give Bend residents a place to recycle their used sporting goods — and make some money as well.

“I’ve been a lifelong thrift store hound,” Sims said. “I’m a cheapskate, I guess. I wanted to create a store that I’d be happy shopping at.”

To build inventory for the store, Sims bought products online, at garage sales and thrift shops. By the end of 2007, he noticed a surge in people looking to sell and buy used products after the recession began to hit home in Central Oregon.

The timing, while bad for many, was ideal for opening a consignment shop for buying and selling used sports gear and apparel, Sims said. His business model matches up with a national trend toward used clothing stores marketing their products in more upscale settings as opposed to the old thrift-shop model. Brands such as Plato’s Closet and the Play It Again Sports store chain have taken the concept national.

For his first three years in business, Sims ran Repeat Performance Sports out of a small concrete building near the intersection of Colorado and Lava streets. The location had poor visibility and low traffic flow so when the opportunity came up to rent the former Bend Bike and Sport building on Century Drive, Sims jumped at the opportunity. He opened in the new location in October 2010.

With the shift to Century Drive, people are more regularly bringing in equipment to sell instead of him having to scour thrift shops and garage sales for product. “Now most of our consignors are regulars,” he said.

With acquisition handled through consignment, Sims and his three-person staff spend more time arranging merchandise in the store. Bikes are hung from the ceiling and lined up in neat rows on the floor. Football, baseball and basketball gear are tucked in another area. Skis, snowboards, boots and poles are stored together. Used kayaks, canoes, inner tubes and scuba diving equipment take up another section of the store.

“What I like about this store is I don’t have to go to nine different stores to get what I like. I can shop for summer and winter — dirt bike, fly fishing and snowboarding in one place,” said Jason Melton, who lives north of Redmond.

Melton stopped to look for used fly fishing equipment Thursday as he took a break between classes at Central Oregon Community College.

Melton said he is backing away from buying things online because “it’s such a hassle” e-mailing back and forth with the seller, then either driving from place to place to look at merchandise, or having it shipped and then being disappointed when it arrives and isn’t what he expected.

Tana Powell, of Bend, said she comes to Sims’ store because she likes to reuse and recycle, especially when it comes to outfitting growing children.

“I am here today looking for a wave board,” Powell said. “I prefer to buy something used for my kids because they grow out of it so quickly, then you can bring it back and they sell it to somebody else.”

Sims said he has built up a following of repeat customers. “We see the same families over and over again,” he said.

Sims doesn’t sell new equipment, unlike other stores in Bend such as Gear Peddler, which sells new and used merchandise. “In order to stay true to our mission of conserving resources, we don’t sell any new products,” he said.

Sims and his staff look up new prices online and in catalogues to help consignors, the people who bring in used goods to sell, to set prices. But ultimately, he said, the consignors determine how much they want to make and what to charge for their products.

Sims is driven by his reuse-recycling spirit, and he said that while some of his customers are passionate about conserving resources, they also are fueled in part by tough economic times. After the recession hit in Central Oregon, Sims said he noticed more people who lost their jobs were selling used sporting equipment and apparel to make ends meet.

While that trend has lessened somewhat with the improving economy, Sims said he believes a store like Repeat Performance Sports helps people who are still out of work or who have taken lower paying jobs to get off of unemployment and are still struggling financially.

To be sure families and others with lower incomes can get what they need, Sims works with area charities that consignors can designate as beneficiaries for the proceeds from the sale of their equipment. The list of non-profits Sims said he works with include the Rimrock Expeditionary Alternative Learning Middle School, Bend Parks and Recreation Scholarship Fund, The Environmental Center and Central Oregon Special Olympics.

Jeff Seymour, general manager at Gear Peddler, said he saw a wave of people who were hurt by the region’s economic downturn bringing in equipment such as used bikes, skis, snowboards for about two years after the Gear Peddler opened three years ago.

During the past year, he said, that trend has been slowing in the Bend area. “We have definitely seen a drop in the amount of used equipment people are bringing in to sell on consignment,” Seymour said. “I don’t know whether that’s because the economy is improving, or they’re just running out of things to sell.”

Offsetting that decline in local consignment, Seymour said he has seen an increase in consignments coming into Gear Peddler from people who live outside Central Oregon.

“We have seen an uptick in the amount of people who are consigning with us from Portland, Seattle and the (San Francisco) Bay Area,” Seymour said.

Part of the business model at Gear Peddler is to use products made from recycled materials, including the Guru bike bags made by the Boulder, Colo. company out of used bike inner tubes; and the water bottles made out of 100 percent recycled aluminum by Liberty Bottle Works of Yakima, Wash.

On a grand scale, Sims said, getting used products back into circulation is about conserving resources.

“When people benefit financially from bringing their stuff here, they are more motivated to recycle, and that helps keep stuff out of the landfill,” he said.