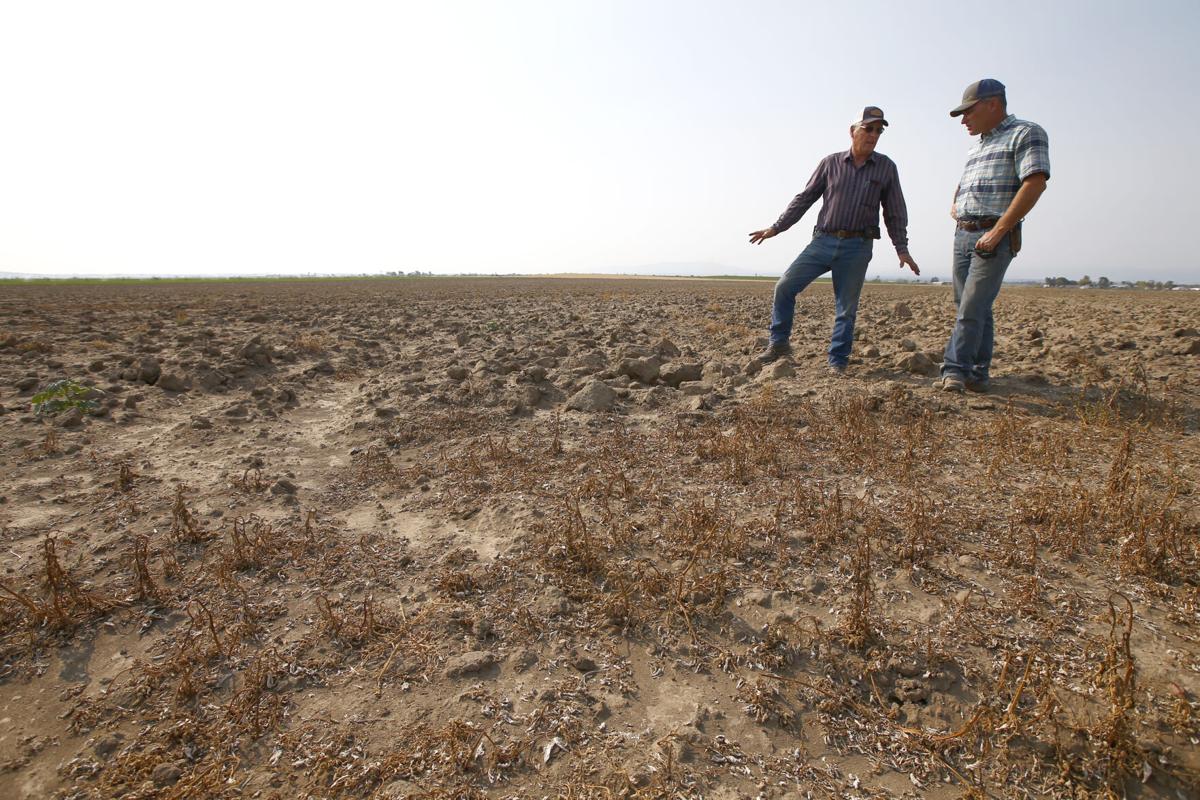 On Wednesday, Mark Hagman, left, and Evan Thomas stand on a parcel of land at their family’s farm in Culver that was not planted this season due to drought conditions. 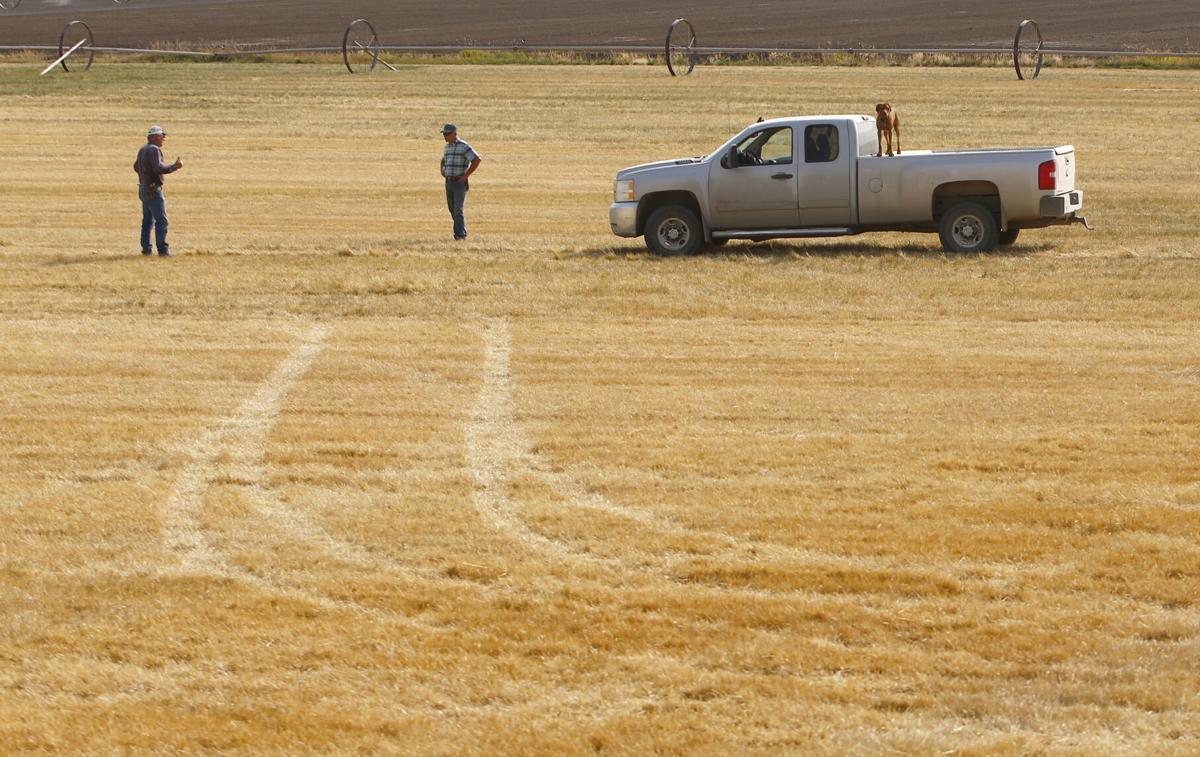 Mark Hagman, left, Evan Thomas talk with each other in a dried up field of blue grass on their family's farm in Culver on Wednesday, Oct. 7, 2020. 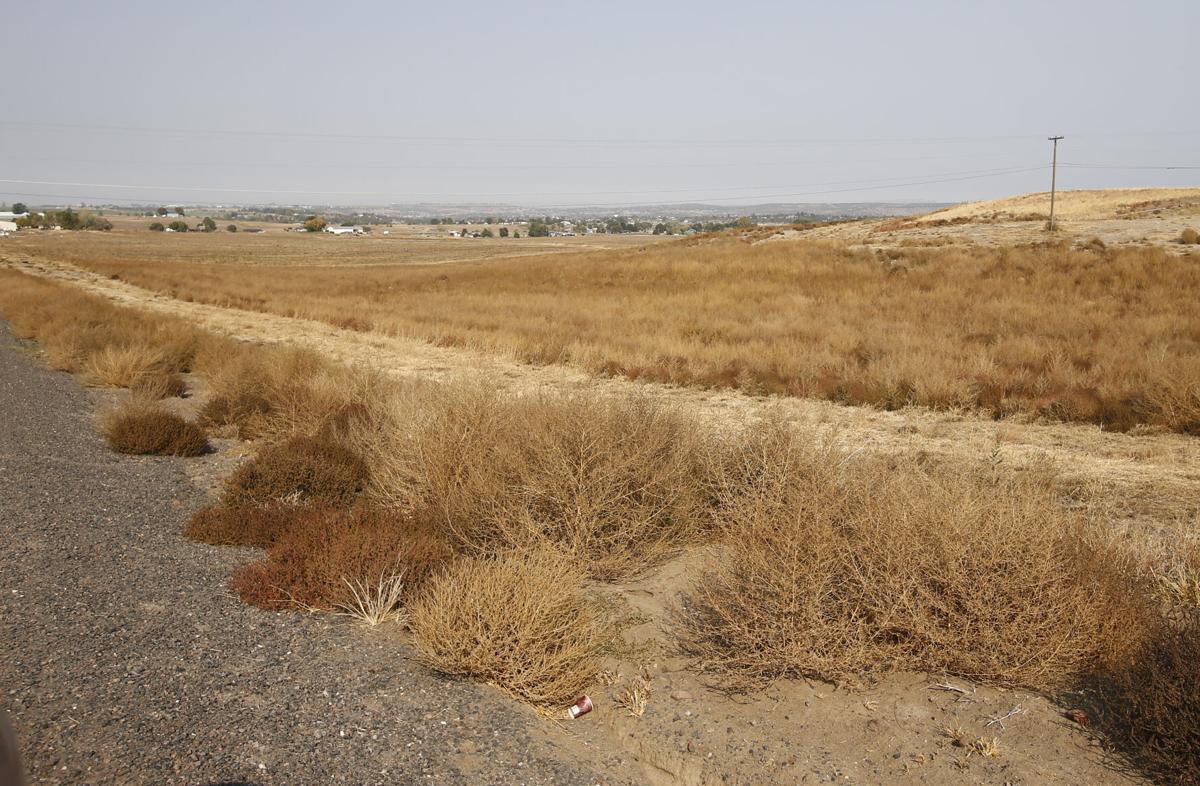 A plot of farm land overtaken with weeds in Culver on Wednesday, Oct. 7, 2020. 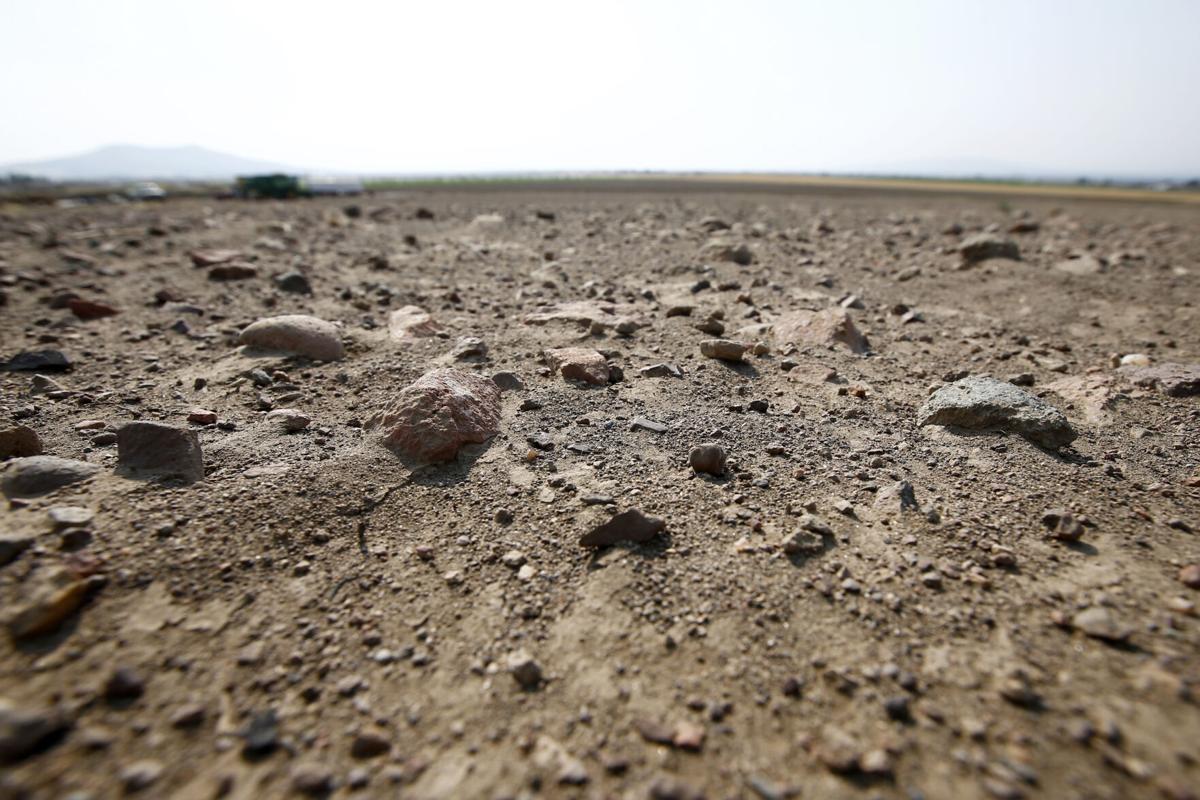 High winds have cleared the top soil and exposing rocks in a field at T&H Farms in Culver not planted this season due to drought conditions. 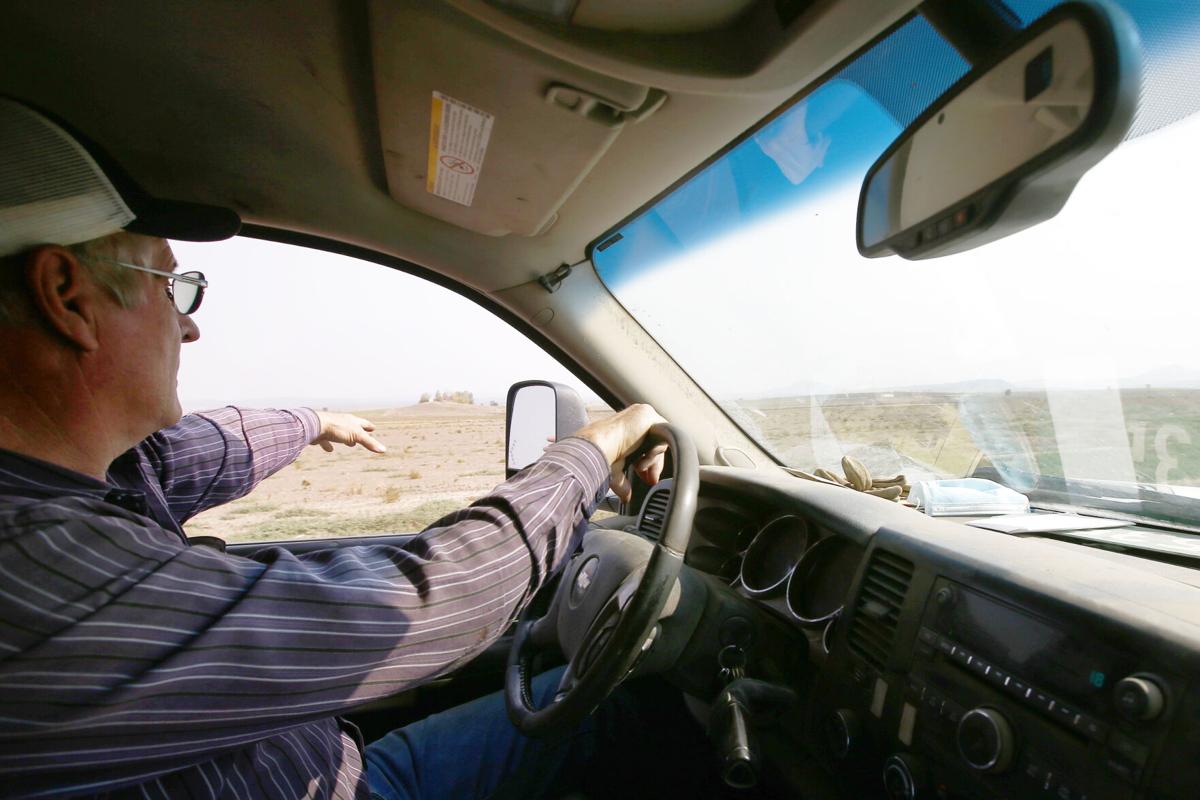 Mark Hagman points to a dry plot of land starting to get overtaken with weeds after his neighbor in Culver stopped farming the plot due to drought conditions this season. 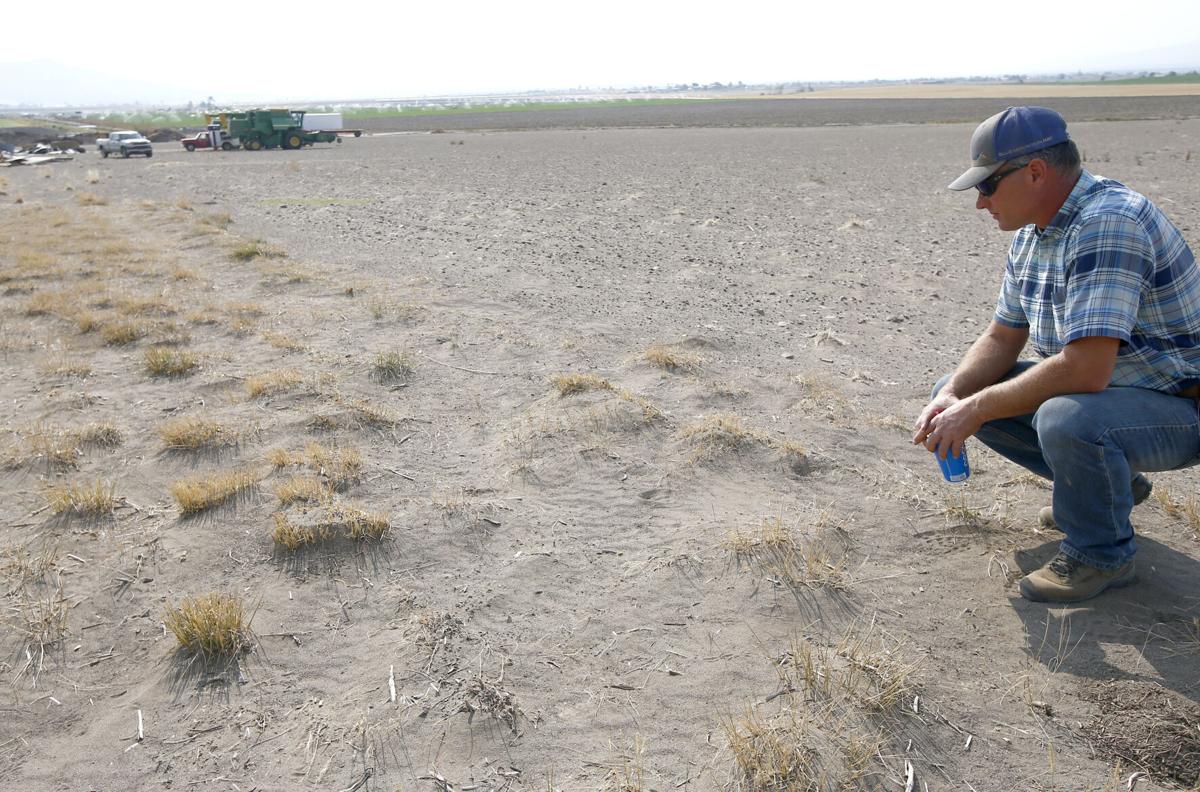 Evan Thomas looks at an area where top soil has been blown off one of his plots and collected behind clumps of grass on his family’s farm in Culver on Wednesday.

On Wednesday, Mark Hagman, left, and Evan Thomas stand on a parcel of land at their family’s farm in Culver that was not planted this season due to drought conditions.

Mark Hagman, left, Evan Thomas talk with each other in a dried up field of blue grass on their family's farm in Culver on Wednesday, Oct. 7, 2020.

A plot of farm land overtaken with weeds in Culver on Wednesday, Oct. 7, 2020.

High winds have cleared the top soil and exposing rocks in a field at T&H Farms in Culver not planted this season due to drought conditions.

Mark Hagman points to a dry plot of land starting to get overtaken with weeds after his neighbor in Culver stopped farming the plot due to drought conditions this season.

Evan Thomas looks at an area where top soil has been blown off one of his plots and collected behind clumps of grass on his family’s farm in Culver on Wednesday.

Evan Thomas, a farmer in Jefferson County, is used to seeing the landscape around his farm covered in various shades of green. This year those colors have mostly turned to brown, with occasional clouds of dust filling the skies.

“It’s a horrible, horrible mess,” said Thomas, who owns T&H Farms LLC with his uncle Mark Hagman. They grow carrots for seed, Kentucky bluegrass for seed, wheat for seed and timothy hay on 1,250 acres near Culver.

“It has caused erosion for us and poor driving conditions for others. It’s blowing in people’s homes. Yeah, it’s horrible,” he added.

In addition to causing a hazard for drivers, Thomas, 47, said the dust affects daily life for Jefferson County residents, covering cars and creeping into homes.

The dust is the result of persistent drought afflicting all of Central Oregon — drought that prevents farmers from planting crops on all their land, leaving wide swaths of it exposed to the elements.

Drought conditions have left Jefferson County farmers with just about half the normal amount of water they have historically been allotted annually. Over the past two years, the land idled has reached 40% for many farms.

Thomas explains that farms are still producing about the same acreage of carrot seed, but other crops are being cut. Jefferson County produces around 35% of the world’s carrot seed.

Cover crops are used to protect idle ground from weeds and topsoil loss to the winds. The seeds are usually planted in winter. But farmers rarely cover all their fields, preferring to leave some ground open, said Thomas. If more water becomes available they can use it to plant a productive crop in spring.

Another drawback of planting cover crops is the cost, especially for an activity that generates no revenue. Farmers are already struggling due to fewer acres planted.

“It’s not cheap,” said Thomas, whose great-great grandparents homesteaded land near Culver in 1903. “Planting a wheat cover crop is $14 an acre for the seed, and you still have to do all the land preparation, get your ground ready to receive that, and there are labor and fuel overhead costs to get that job done.”

JoHanna Symons, co-founder of Symons Beef Co. in Madras, said planting a cover crop is unsustainable over the long-term.

“Expenses incurred in that cover crop will carry over into the next year and make the profit margin on the next crop that is planted that much smaller,” said Symons, who runs her company with her husband, Jeremy Symons.

The increasing costs are weighing on the bottom line of many farms in the area, she added.

“Mortgage payments are still due and payable on land — the finance companies aren’t giving farmers a break because of the lack of crops being grown, which means lack of income,” said Symons. “Our income has basically been cut in half and our expenses have stayed the same,” she said.

“If we have two more years like this year, it will be a dust bowl,” said Thomas.

The lack of water stored in the reservoir is due to weak snowpack in the Cascades in recent years.

All three counties in Central Oregon are now in a state of drought declared by the governor. Jefferson County is suffering the most — according to the U.S. drought monitor, more than half of the county is in a state of extreme drought.

The dry conditions are partially due to climate change, said Larry O’Neill, an associate professor at the College of Earth, Ocean and Atmospheric Sciences at Oregon State University. Two decades of climate analysis largely show an increase in temperature in Central Oregon over the last half of the 20th century and a decrease in precipitation, said O’Neill.

In order for the reservoir to fill, Wickiup typically has to be at least 25% full at the end of an irrigation season. Even a strong winter won’t fill the reservoir in the coming year, said Kyle Gorman, Oregon Water Resources Department Manager.

“There is no scenario that could I imagine where Wickiup will fill this winter,” said Gorman. “Its inflow is largely dependent on groundwater, and it just doesn’t respond quickly enough in one winter to fill the reservoir given where it is today,” said Gorman.

Heisler blames Central Oregon Irrigation District, one of the largest and oldest districts in the area, for using too much water in the Deschutes Basin.

“State law requires irrigators to put the water to beneficial use without waste, but COID does little to reduce its waste, other than its big piping project, which will not solve the current water supply problem,” said Heisler. “Rather than manage the water wisely, we saw business as usual, a tragedy of the commons.”

Gorman said the state water resources department cannot force other districts to use less water to assist a junior water rights holder, unless it can identify legitimate waste. When water waste is identified, the department can curtail the district’s diversion until the waste is stopped.

“This would likely play out with a change of a couple of cubic feet per second and in the big scheme of things and overall supply, would not make any difference for NUID,” said Gorman, referring to the North Unit Irrigation District.

Gail Snyder, executive director for Coalition for the Deschutes, advocates collaboration between the senior water rights holders and irrigation districts to find solutions that benefit both farmers and the environment.

“Farmers are the stewards of the land and water. If we in the broader community hope to have a healthy environment for all, including farmers and rural communities, we need to step and support our neighbors,” said Snyder.

Oregonians should “urge decision-makers to make much-needed changes to Oregon water law and policies that allow water to be shared more equitably between stakeholders, including rivers,” said Snyder.

As the irrigation districts continue to seek ways to collaborate and share water, and everyone crosses fingers for a few wet winters needed to fill Wickiup to the brim, farmers in the North Unit district count their losses and wonder how much longer they can stay in business.

“I am hoping for a miracle, but if it ends up being less water than we received this year, then if that is the case it’s going to be a one-and-done deal for a lot of people,” said Thomas. “Fifty percent (of fields) will probably be fallow. That is losing too much money to continue for long.”

Water scarcity issues (along with fire management) require intelligent long term solutions. Why then did Deschutes County Commission give the go ahead for the two golf course resort water guzzler near the Metolius? We don’t need short term thinkers right now. Vote for Phil Chang and thank Phil Henderson for his service.