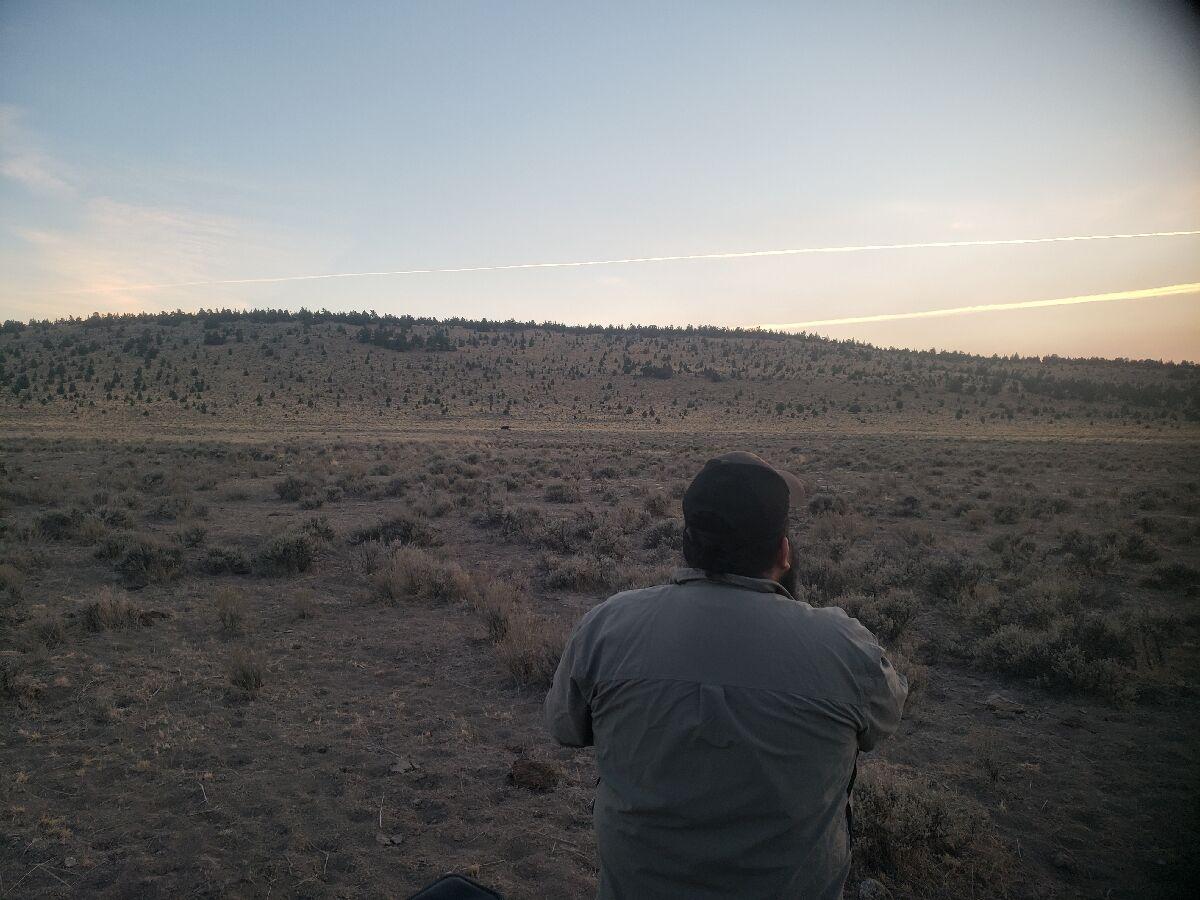 Adrian Zamarripa, a volunteer with an Oregon State University-Cascades study of spotted bats, waits at dusk in the Badlands just east of Bend while listening for sounds of the elusive creature. 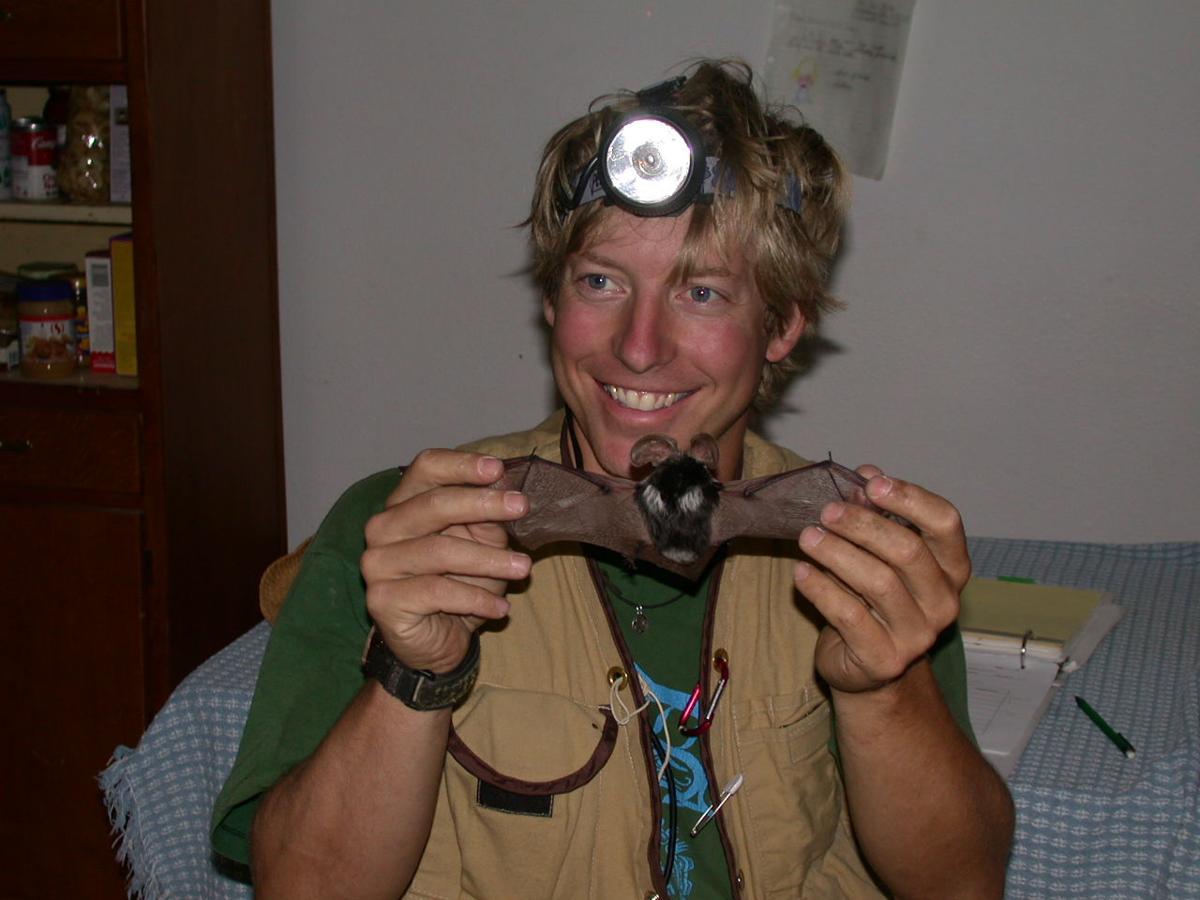 Tom Rodhouse, an ecologist with the National Park Service and a courtesy faculty member at OSU-Cascades, holds a spotted bat in Clarno in 2003.

Adrian Zamarripa, a volunteer with an Oregon State University-Cascades study of spotted bats, waits at dusk in the Badlands just east of Bend while listening for sounds of the elusive creature.

Tom Rodhouse, an ecologist with the National Park Service and a courtesy faculty member at OSU-Cascades, holds a spotted bat in Clarno in 2003.

By harnessing the power of “citizen scientists,” researchers from Oregon State University-Cascades completed a study of an elusive species of bat.

OSU-Cascades worked with 12 volunteers over the past two years on the project, which focused its efforts on the spotted bat. The team completed 61 surveys, identifying the bat 25 times.

Spotted bats are rarely seen but remain an important species in Central Oregon. They help control insect populations by consuming large amounts of mosquitoes and other agricultural pests.

They are notable for their large ears and distinctive white spots on their black backs. Their ears are believed to be the largest of any bat species in North America.

“Spotted bats are high-flying, hard-charging lions of the sky, trying to catch the big moths,” said Tom Rodhouse, the project leader and a courtesy faculty member at OSU-Cascades.

“They’re going after the big critters, calling from 20 or 40 meters away, getting a bounce and chasing it down. People with undamaged hearing can hear a spotted bat more than 60 meters away,” he added.

Sara Rose, one of the organizers of the project and a biologist for OSU-Cascades Northwest Bat Hub, helped to recruit volunteers to listen for the bats.

“Most of the volunteers expressed a specific interest in bats,” said Rose. “For them, this was a rare opportunity to experience bats firsthand without disturbing them. Others were university students who wanted some field experience to add to their resumes.”

The OSU-Cascades researchers are studying the spotted bat to formulate a protection plan for this sensitive species. Rodhouse said the research showed the spotted bat species is much more widespread than previously thought.

The project “confirmed that Central Oregon is a hotspot for this species, regionally, and should be a place of study and conservation, even providing long-term refuge as other habitats decline,” said Rodhouse, also an ecologist with the National Park Service.

Because they are active at night, the spotted bat is challenging to see and more difficult to capture, said Rodhouse, so the researchers relied on listening for the bat’s distinctive “clicking” sound.

Volunteers were dispatched to several spots around the High Desert around dusk to listen for the bats. Rodhouse said it was a unique opportunity to enjoy the sounds of nature while also contributing to valuable scientific data.

“The volunteers we heard from really enjoyed the experience. It was a great way to have an excuse to go out and do something outdoors in a different way,” said Rodhouse.

While listening for the spotted bat on his surveys, Rodhouse reported hearing coyotes, a barn owl and crickets, among other sounds of the desert nights.

“Sounds that we are often too busy to really hear and enjoy,” he said.

There are no plans to conduct another round of research due to a lack of funding, said Rodhouse. But if interest in the project persists, Rodhouse hopes another organization will continue the work that has been started.

“We definitely could take it on the road and recruit across the region, scale it up, generate even with just one or two more summers a truly extraordinary dataset for this elusive animal, to open up that black box of how it is faring,” said Rodhouse. “That is my dream.”

Read the room, folks. Stop messing around with bats!