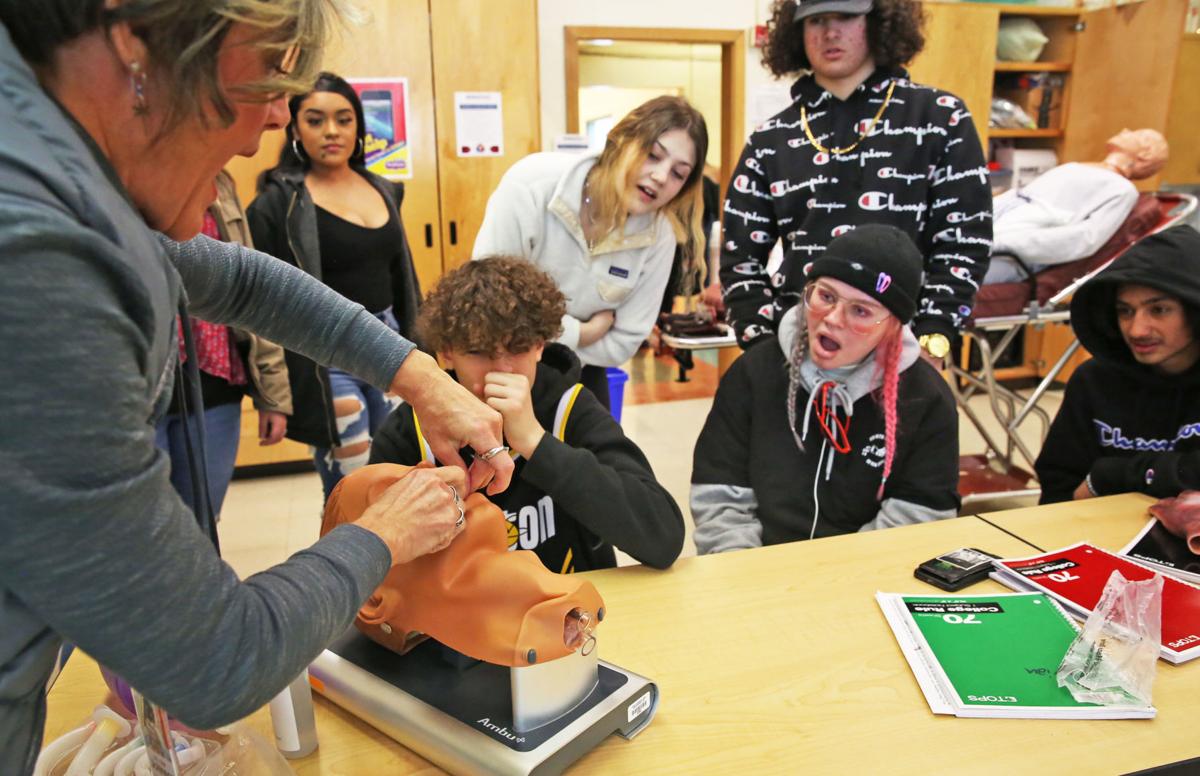 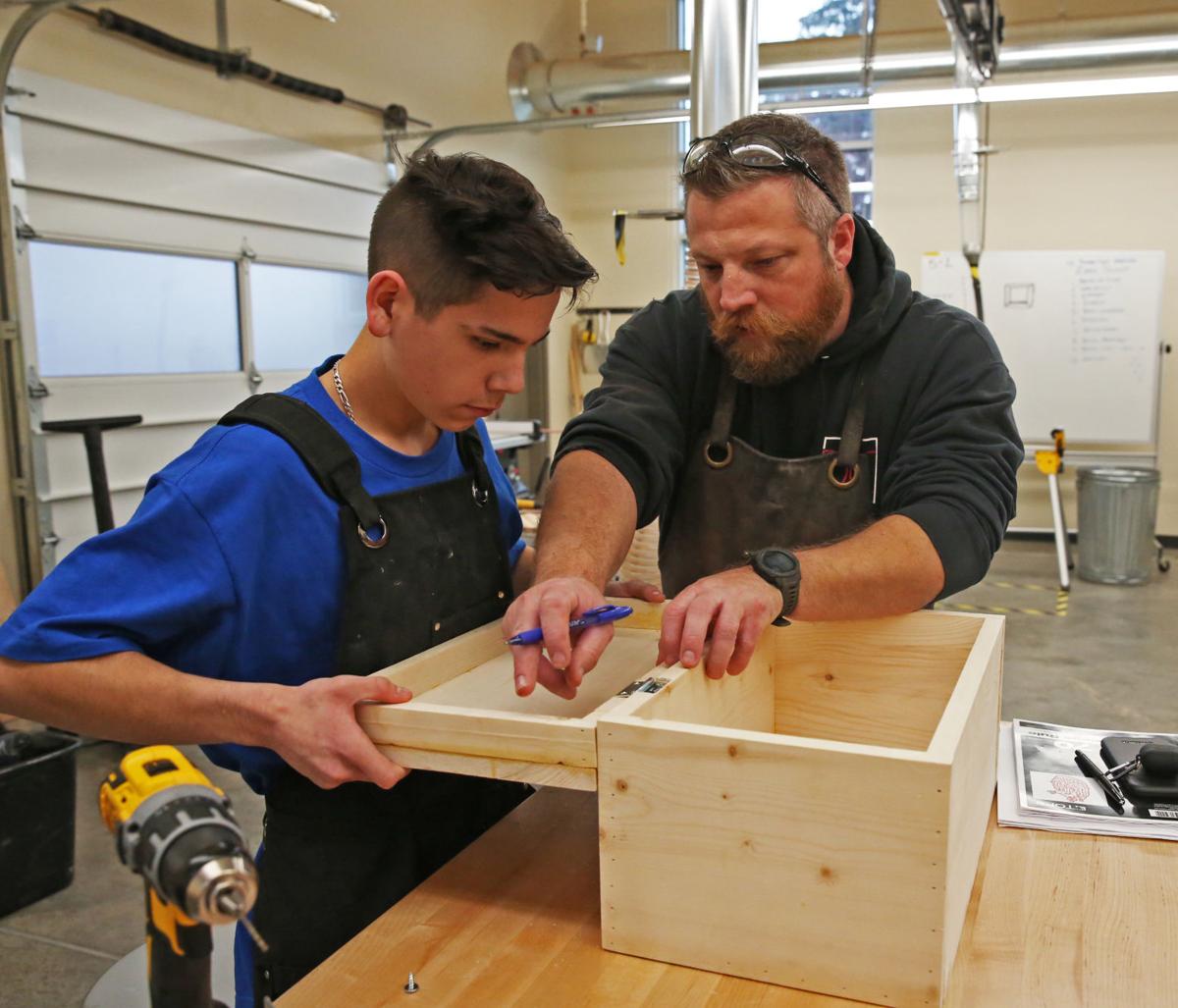 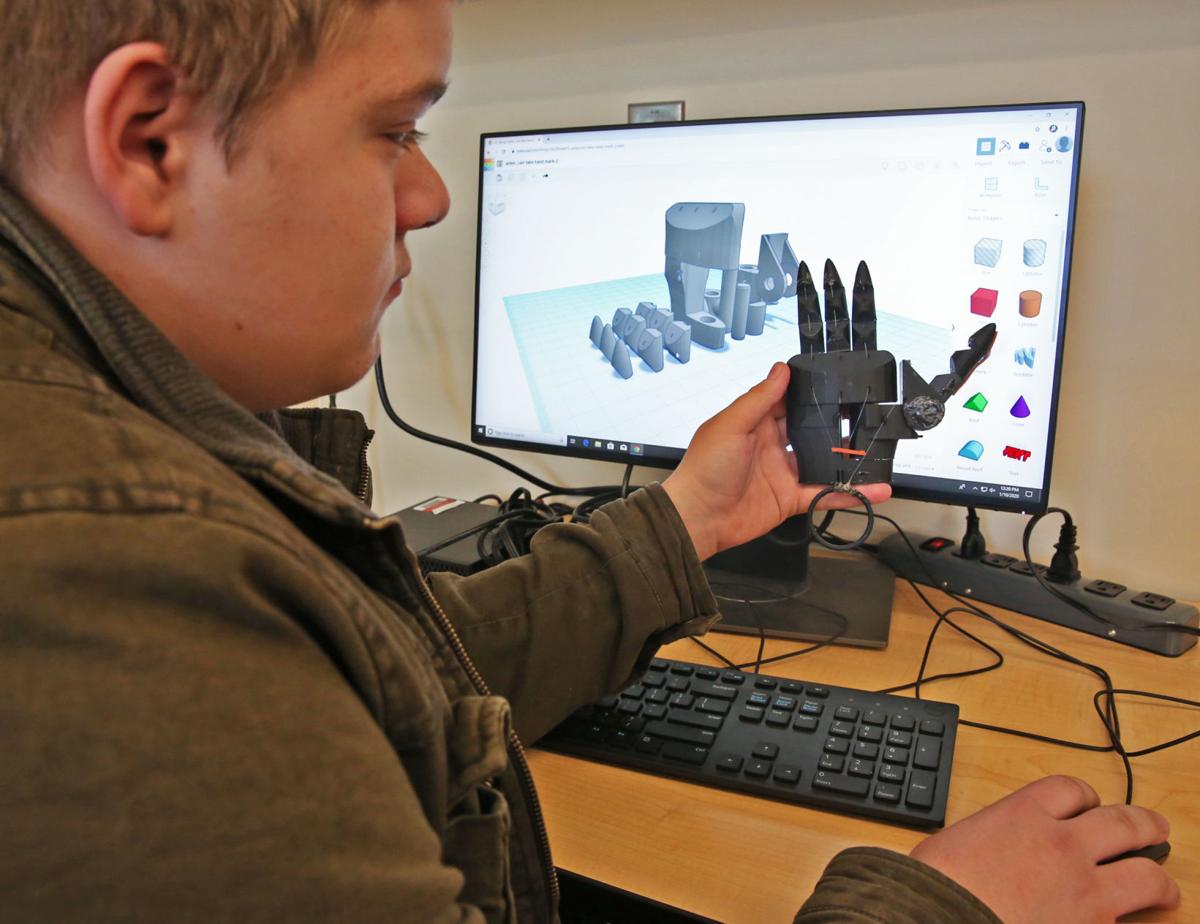 Carl Bray and Aiden Ganzer, students at Bend Tech Academy, built a prosthetic hand in November for their design class.

Like a real hand, the sleek, prosthetic version has multiple-jointed fingers than can curl into a near-fist when a string is pulled. Carl, an 11th grader, and Aiden, a ninth grader, designed the hand using a computer program, then 3D printed and assembled it.

“Just this part here was about 15 pieces,” Carl, 16, said, pointing at the hand’s ring finger. “It took a lot more work, a lot more effort, but I do like this.”

Projects like this are the norm at Bend Tech at Marshall High School, where 130 students are learning career-oriented skills that include learning to pilot drones and how to build tiny houses.

After a year of planning and construction, the school’s transformation from an alternative high school to a career and technical education magnet high school was completed by the start of the current academic year.

Bend Tech Principal Sal Cassaro said the school’s main goal is to prepare students for their careers after school.

“Every school has a thing, and our thing is making them future-ready,” Cassaro said of his students. “We won’t spend a dollar (otherwise).”

Carl, who is in the STEM academy, is willing to endure a two-hour round trip by bus from his hometown of La Pine every day. He said the commute is worth it due to the skills he’s learning.

“The career tech classes get me prepared for everything, not just college,” Carl said. “Like, the woodworking class — if I wanted to fix something in my house, I could fix it, instead of paying a guy to fix it for me.”

Daisy Waite, an 11th grader in the health academy, had similar reasons for leaving Bend High this fall.

“(Classes are) more hands-on, and everything you learn here, you can apply to your daily life,” Daisy, 16, said.

Bryce Sakasegawa, a ninth-grader in Bend Tech’s construction academy, said he’s enjoyed the projects he’s built. He singled out the 68-square-foot tiny home he and his classmates have been working on. They’re finishing the roofing now, and students will eventually wire electricity into the tiny home as well, according to construction teacher Tiggy Dierdorf.

Cassaro already had the vision for Bend Tech when he took over Marshall in 2018, but the school’s educational format wasn’t fully realized until September. He said last school year was transitional, as the school district didn’t finish building two new classrooms — one for a construction class, one for a design and robotics lab — and a gym on Marshall’s campus until the end of that school year.

Now, all four of Bend Tech’s academies are up and running. And according to Cassaro, students earn college credits at all four academies. That’s an aspect of Bend Tech that Cassaro said he wants to emphasize.

“Next year, I’m going to challenge our staff: I want more college credits earned in this building, per student, than any other school in our region,” he said. “I don’t know if we’re going to get there, I really don’t, but man, we’re going to shoot for it.”

Some of Bend Tech’s teachers enjoy teaching these specialized subjects as much as students enjoy learning them.

“I feel pretty lucky that I get to play with toys,” joked Drew Erickson, who teaches robotics, drones, design and engineering classes.

Erickson said his classes teach students the importance of problem solving and learning from mistakes. For example, has students in his robotics course design a robot that can travel through a maze. Students’ first attempts usually aren’t successful, he said.

Cassaro said he loves that Bend Tech’s students have already developed a passion for using their new skills to help the community. On Christmas Eve, students hosted a blood drive. And students in Deirdorf’s woodworking class built mahogany nameplates for the Bend-La Pine School Board members out of a West African wood called Padauk.

“Not only are they taking pride in themselves and pride in their education ... but they’re finding this passion to make connections in the community,” Cassaro said.