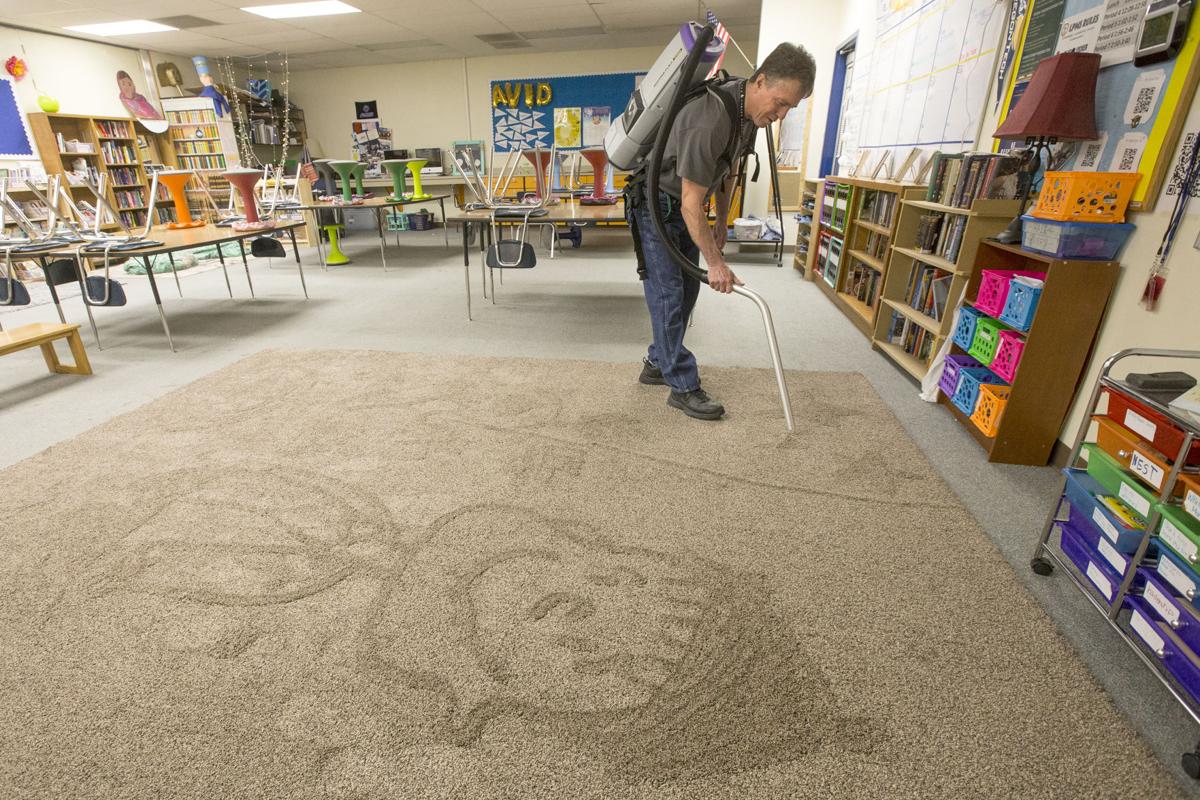 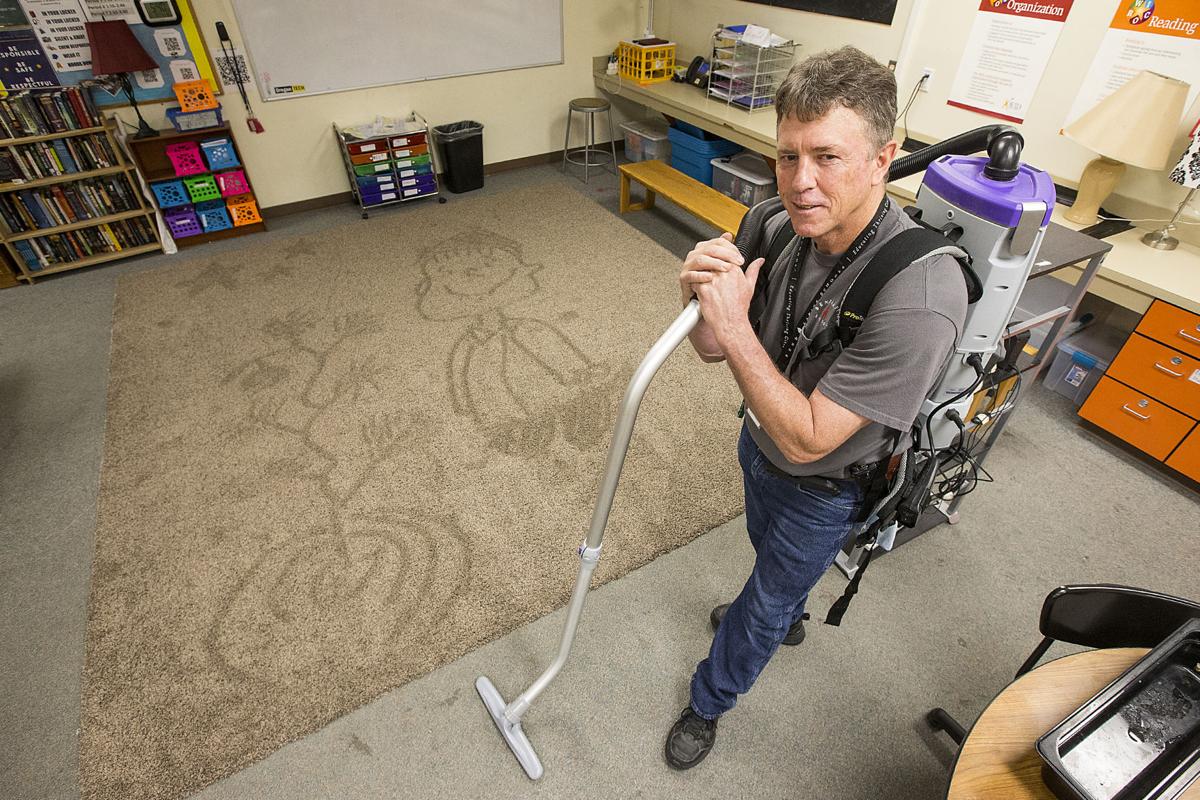 Custodian Shane Maxey stands by an image of the “Peanuts” character Linus he vacuumed into the carpet of a classroom at La Pine Middle School on Thursday. 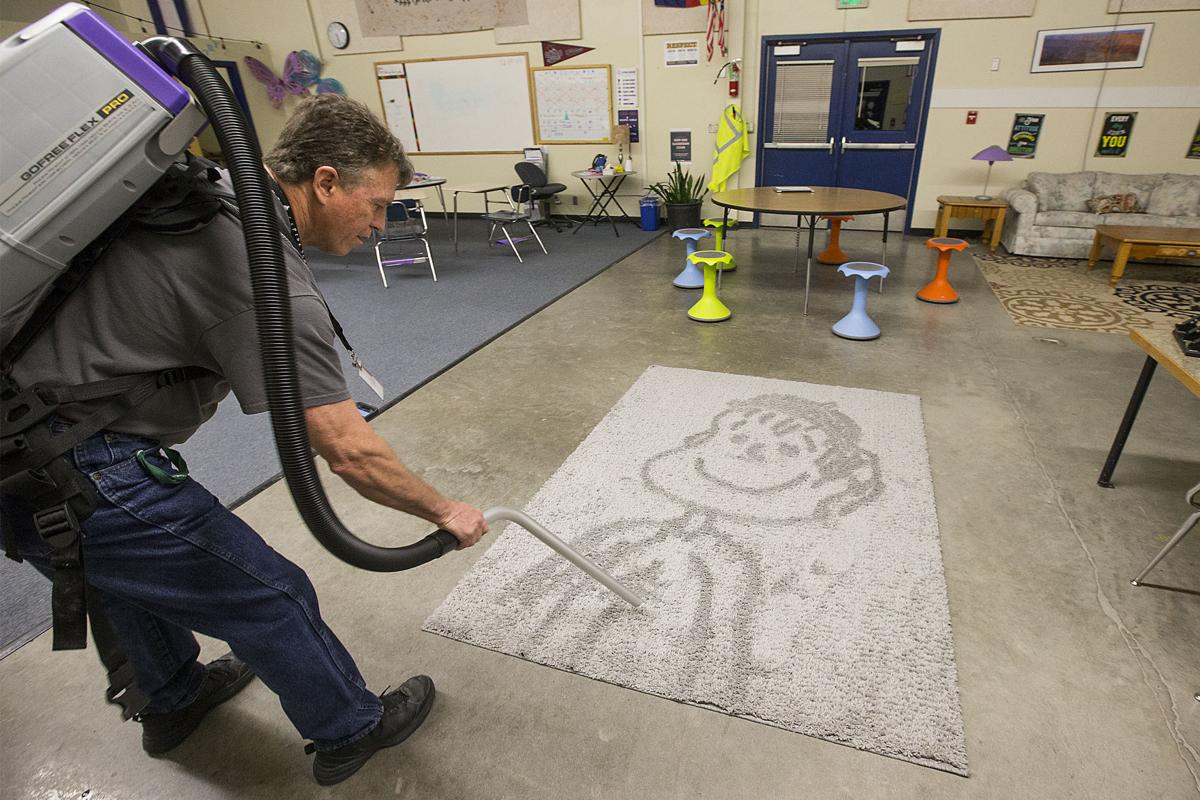 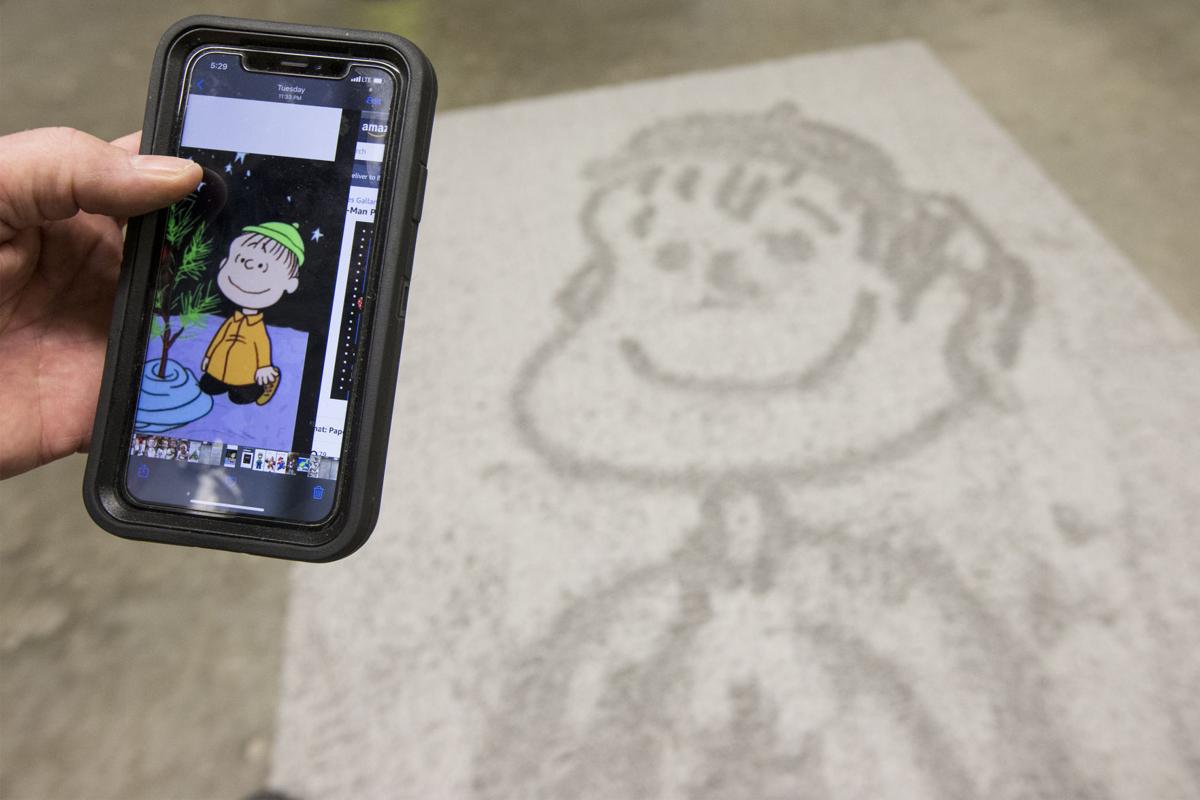 Custodian Shane Maxey references a picture of the “Peanuts” character Linus on his phone while creating his carpet art.

Custodian Shane Maxey stands by an image of the “Peanuts” character Linus he vacuumed into the carpet of a classroom at La Pine Middle School on Thursday.

Custodian Shane Maxey references a picture of the “Peanuts” character Linus on his phone while creating his carpet art.

By JACKSON HOGAN • The Bulletin

LA PINE — In a La Pine Middle School classroom on a recent Thursday evening, long after students had left for the day, a substitute custodian began drawing his next masterpiece.

Shane Maxey’s canvas is a shag rug. His pen is a vacuum wand. He held his cellphone in one hand — which displayed the “Peanuts” character Linus next to Charlie Brown’s famous threadbare Christmas tree — and the vacuum nozzle in the other hand.

“I haven’t done this before, so we’ll see how this turns out,” said Maxey, 55, as he turned on the vacuum.

In just a few minutes, using short, precise strokes, Linus and the tree came to life on the rug. Maxey was relieved that it looked accurate, especially compared to an earlier attempted “Peanuts” doodle.

“I tried drawing Charlie Brown on a sled the other day,” he joked. “It just looked like a bunch of lines. It looked terrible.”

But the students love what he does. Since November, Maxey’s daily vacuum doodles have delighted students and teachers in La Pine Middle School.

“It’s cool that he has that talent that he’s sharing with the kids,” said sixth grade English teacher Carrie Baisch, whose classroom has one of Maxey’s carpet canvasses. “It’s very exciting to come in the morning and see what he’s done.”

According to students in the classroom that Baisch and fellow sixth grade English teacher Jessica Markham share, figuring out which cartoon or superhero Maxey drew the night before quickly became a daily ritual.

“Every time we come inside, and the bell rings, we go in here and we always bring out our phones, look at the carpet and take pictures,” said sixth grader Brooklyn Forester, 11.

Maxey insisted he’s not an artist, and he was amused at the popularity of his doodles.

“I can’t draw to save my life,” he said, chuckling. “This is just something that took off, it’s more of a curiosity.”

Maxey, a La Pine resident, started custodial work in Bend-La Pine Schools a few years ago. Before moving to Central Oregon, he served in the Colusa County Sheriff’s Office north of Sacramento, California, for more than 28 years, retiring as a lieutenant in 2014.

Maxey’s first carpet doodle came in January 2018, during a previous custodial stint at La Pine Middle School. He simply drew a smiley face on a classroom’s shag-carpet rug with his vacuum wand.

A couple days after that, Maxey saw a student’s drawing of a Minion — the yellow cartoon sidekicks from the “Despicable Me” movies — and was inspired.

From there, Maxey experimented with drawing all sorts of famous characters on rugs at La Pine Middle School, and in a later stint at Three Rivers School later in 2018.

“I figured, ‘I wonder if I could do this or that,’ and I started Googling cartoons,” he said. “I’m sitting around in the morning, having coffee, seeing which ones might work.”

Maxey has doodled “Looney Toons” icons like Yosemite Sam and Porky Pig, the beloved Pokémon, Pikachu, and plenty of superheroes.

He said some heroes are easier to draw with the vacuum than others — while drawing Batman or Baby Groot isn’t too difficult, Captain America’s complex helmet was trickier. So he drew Cap’s trademark shield instead, a strategy he also used with Thor’s hammer and Wonder Woman’s double-W logo.

Maxey said he had to retire his drawings for a while, as he was continually assigned to schools that didn’t have the type of rug necessary to draw. But when he returned to La Pine Middle School in November, he started doodling again.

And when a new batch of students saw the drawings for the first time, they were confused and wowed.

Those students’ homeroom teacher, Carrie Baisch, also didn’t expect to see drawings on her carpet after returning from maternity leave in mid-December.

Ryder and a few other La Pine sixth graders said they were particularly impressed with Maxey’s recent Christmas-themed drawing. The custodian had drawn the iconic holiday grump, the Grinch, leering down on the town of Whoville from his cave.

“A lot of kids come in every day with a lot of baggage,” he said. “If this gives any of them a reason to smile, then mission accomplished.”