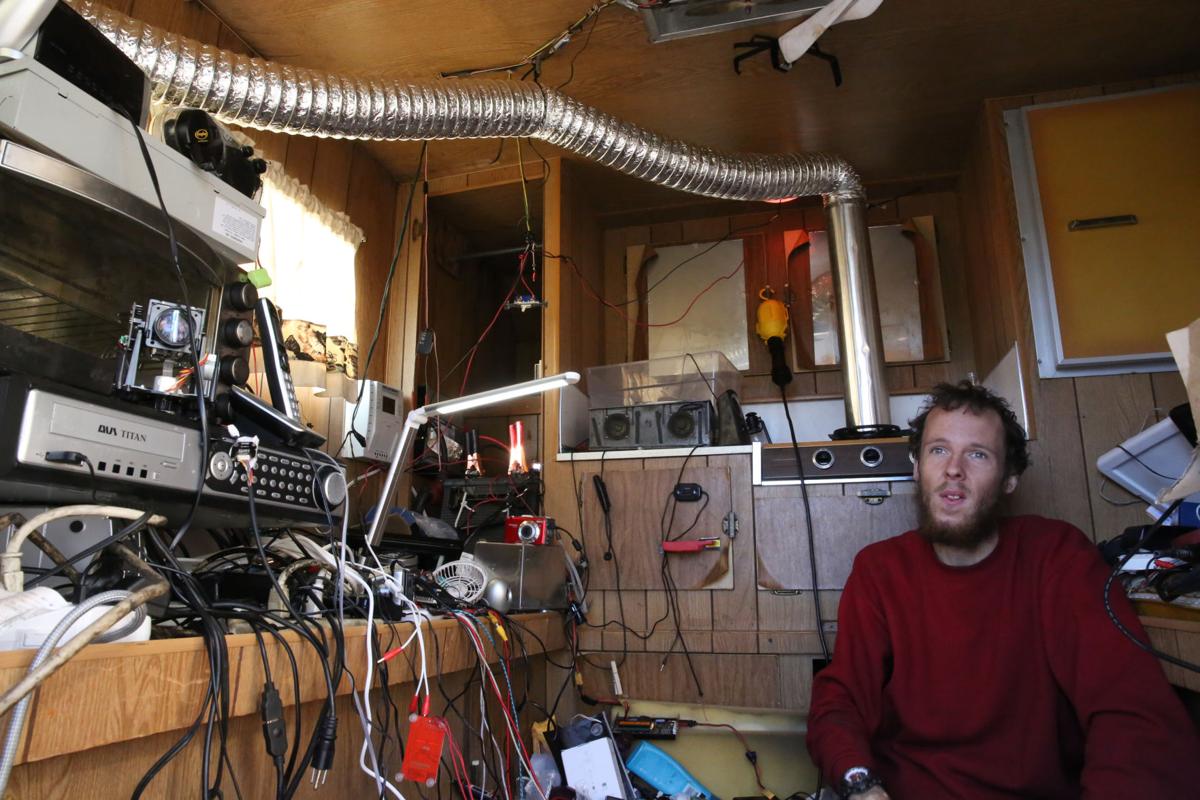 Paul Alex Rudy sits in his camper, where he lives on the street on the north end of Bend. (Dean Guernsey/Bulletin photos) 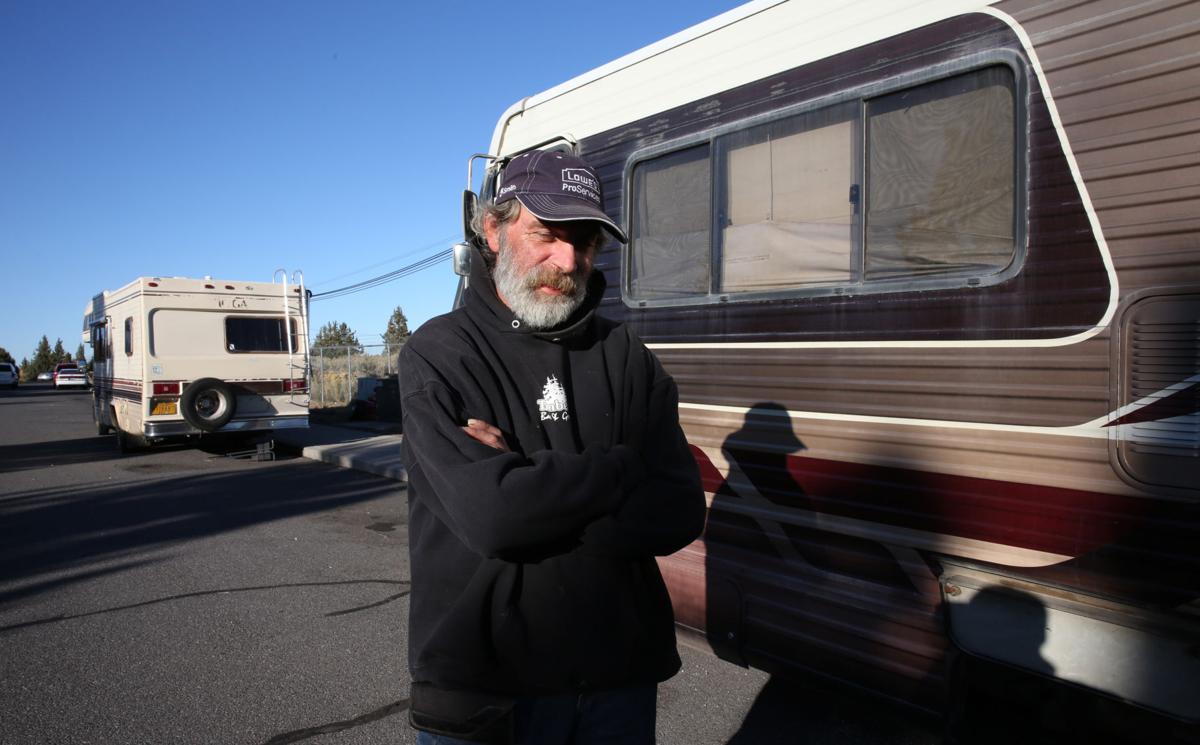 Rick Lee shows a tattoo depicting his children with his motorhome and belongings in the background. (Dean Guernsey/Bulletin photo) 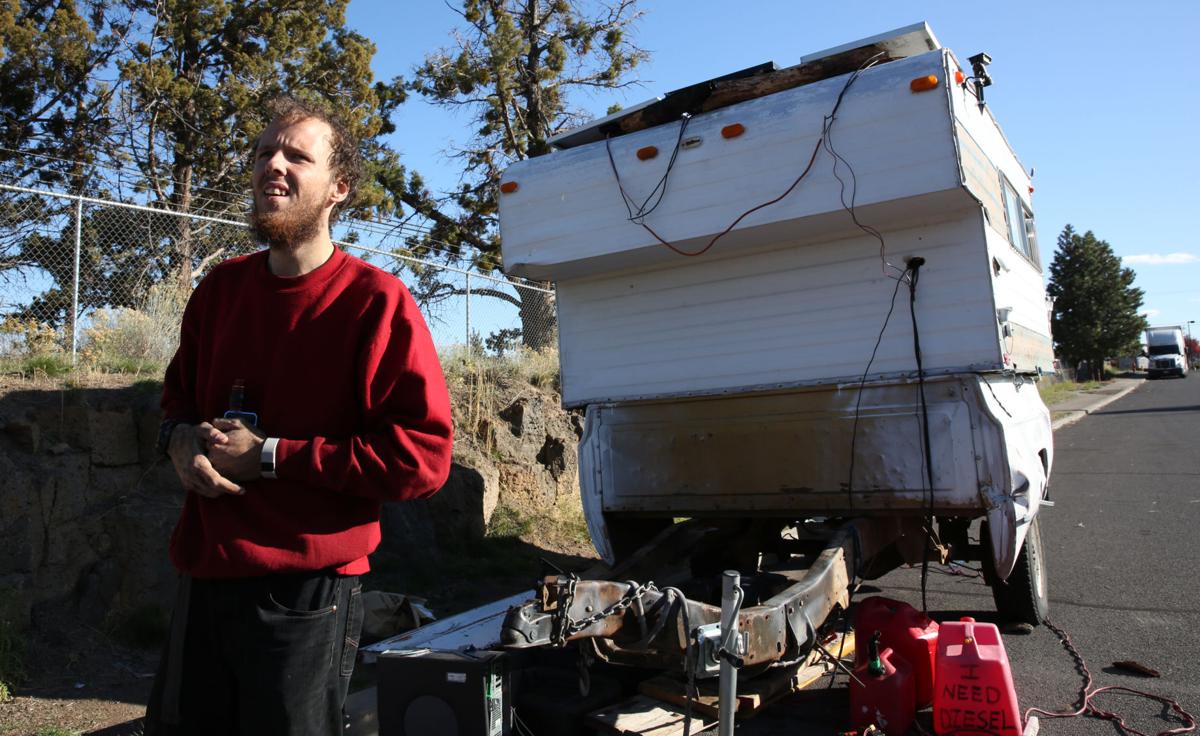 Paul Alex Rudy outside of his camper on the street where he is living on the north end of Bend. (Dean Guernsey/Bulletin photo)

Law enforcement patrols the road on the north end of Bend where homeless people live in their RVs. 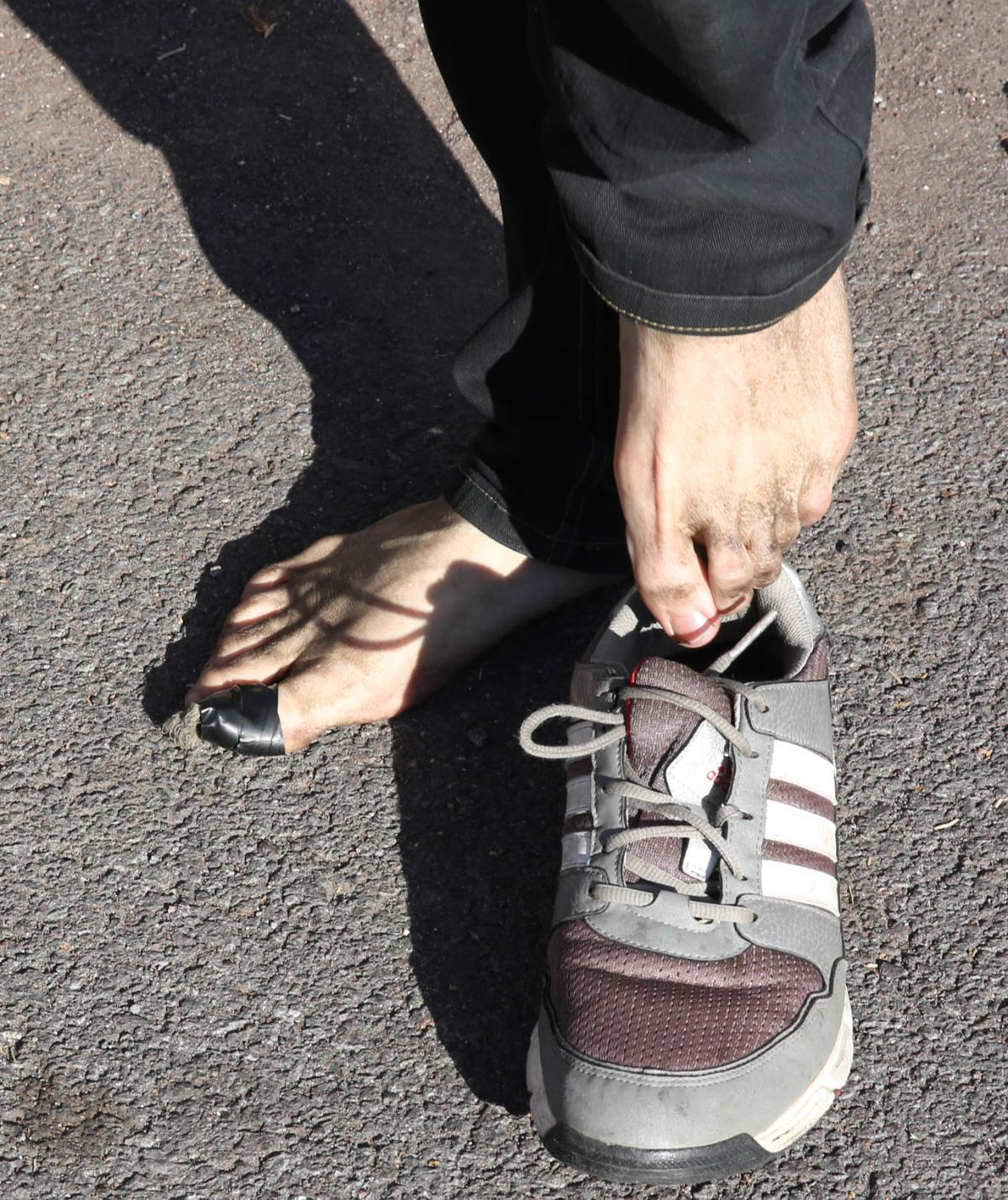 Paul Alex Rudy puts on his shoes outside of his camper on the street where he is living on the north end of Bend. (Dean Guernsey/Bulletin photo) 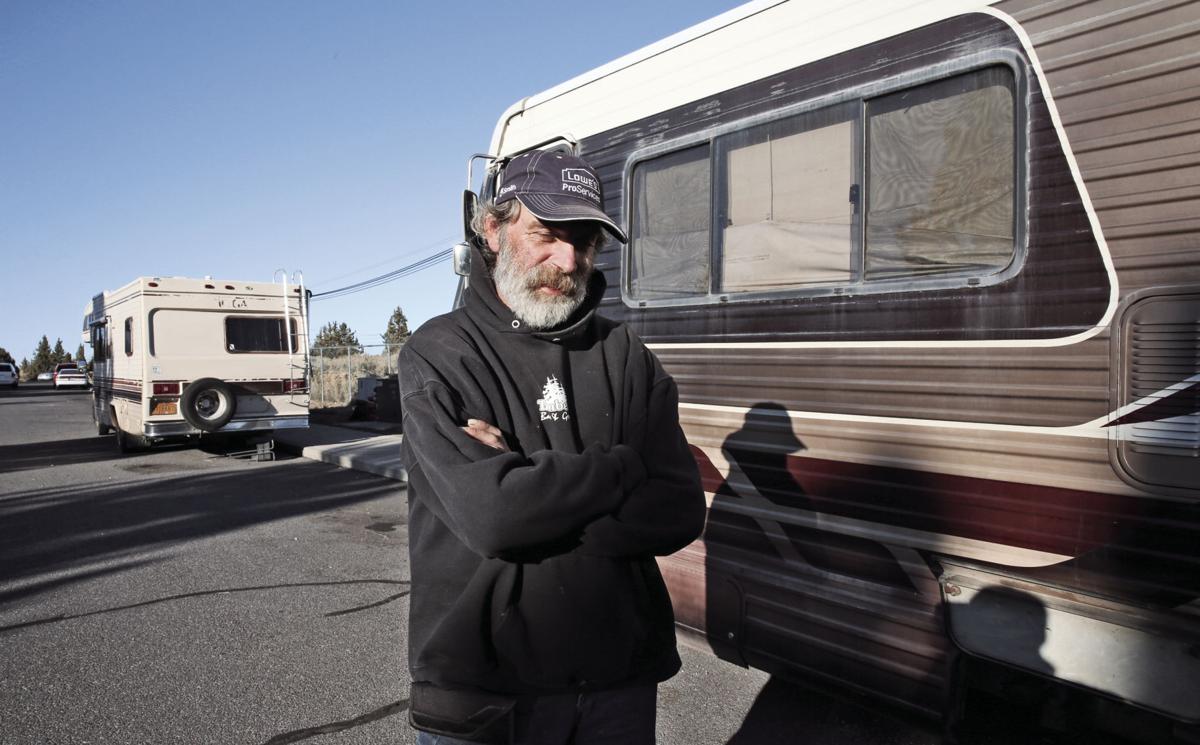 Rick Lee with his motorhome where he lives on the street on the north end of Bend. (Dean Guernsey/Bulletin photo)

Paul Alex Rudy sits in his camper, where he lives on the street on the north end of Bend. (Dean Guernsey/Bulletin photos)

Rick Lee shows a tattoo depicting his children with his motorhome and belongings in the background. (Dean Guernsey/Bulletin photo)

Paul Alex Rudy outside of his camper on the street where he is living on the north end of Bend. (Dean Guernsey/Bulletin photo)

Law enforcement patrols the road on the north end of Bend where homeless people live in their RVs.

Paul Alex Rudy puts on his shoes outside of his camper on the street where he is living on the north end of Bend. (Dean Guernsey/Bulletin photo)

Rick Lee with his motorhome where he lives on the street on the north end of Bend. (Dean Guernsey/Bulletin photo)

Paul Alex Rudy would love to have a job working with technology.

The 26-year-old loves to collect old cameras, radios and other gadgets, fix them up and resell them on websites such as eBay. Working in the tech department of a store like Fred Meyer would be the dream.

“It started when I got curious about Christmas lights as a kid,” Rudy said. “I’ve been obsessed with technology ever since.”

But for the past six months, Rudy has been homeless, living in a trailer on a street in north Bend. Rudy said he has yet to find a place he could afford on the $700 check he receives from Social Security for his disability. So instead, he makes sure he moves his trailer enough to avoid getting parking tickets or being towed.

“How am I supposed to find work when I’m constantly worried about moving?” Rudy said.

Rudy is one of many in a growing population of people in Deschutes County who are housed in a vehicle but are homeless. They live on the streets of Deschutes County in RVs, trailers and other vehicles out of necessity because there are few affordable spots to live and not enough available spots to park them, said Colleen Thomas, the homeless outreach coordinator for the county.

“(Buying an RV) is more affordable than trying to rent an apartment,” Thomas said. “It’s easier to find an RV on Craigslist, but unfortunately, you don’t have affordable or vacant parking spaces for those RVs to go.”

The problem was highlighted in this year’s point-in-time count, a national survey wherein county officials document the number of people they see experiencing homelessness. Close to 900 people were identified this year, a 12% increase over 2018.

While homelessness has been growing in Central Oregon for the past few years, the increase in the number of RVs on the streets in particular has become more visible. People living in RVs are considered homeless when the vehicle has the ability to hook up to full services such as sewer and water but can’t access connections, Thomas said.

Earlier this fall, the Deschutes County Commission approved adding another full-time code enforcement officer because of a 44% jump in code complaints, many of which were related to RV parking and sewage issues.

“It’s an increasing population because it’s more visible,” Thomas said. “You’re driving down the street where people are parked.”

The steadily increasing presence of RVs on the street is indicative of a larger affordable housing problem in Central Oregon, Thomas said.

“What we’ve seen in our community is rental prices increasing and forcing people out of their homes,” Thomas said.

But even when someone can afford an RV, they could face other barriers, Thomas said. Vacancies are rare at RV parks around the county, with many reporting monthslong waiting lists. And even if a spot does open up, it may not be affordable or accept RVs that are older than a certain year, Thomas said — restrictions that narrow the window of opportunity for people on tight budgets.

The demand for spots has outpaced supply so much that some, like Darla Pugmire, who manages Green Acres RV Park outside of Redmond, have stopped keeping a waitlist. She got tired of having to deliver the bad news that, even after six to eight months of waiting, there were still no spots.

And while many people choose to live intentionally in an RV as a lifestyle, Pugmire estimates that about 85% of the calls she was receiving were out of desperation from people with no where else to go.

“It’s one of the only ways people can afford to live,” Pugmire said.

But permitting and creating more parks is easier said than done. The last time an RV park was permitted in Deschutes County was 15 years ago in Brothers, county planner Will Groves said, though the project was never developed.

This is because most land outside of cities is zoned for farm or forestry, which comes with tight restrictions on what can be developed on it. Only a few zones exist outside of cities that allow new RV parks in the county, largely because the state land use system discourages high-density development in rural areas. Most RV parks in Deschutes County have been developed in cities.

“There’s little land where it can be lawfully established,” Groves said. “Under the state land use system, there isn’t a good way to develop these lands under these uses.”

For now, the growing number of RVs on the streets is being managed by law enforcement. With Bend’s new parking rule in effect, police are getting more calls about making sure vehicles are parked for no longer than three days, said Bend Police Lt. Juli McConkey said.

The department also gets calls about litter and leaking sewage.

But for the most part, officers are not responding to major disturbances or other crime often.

“Sometimes, people think: This vehicle is parked here; that must be what’s happening,” McConkey said, referring to criminal activity. “Just because someone’s living in an RV doesn’t mean they are doing criminal behavior.”

The goal of Bend’s parking rule is to encourage people to move on their own, and McConkey said in that way the program is working as it should.

“Our housing situation is expensive,” McConkey continued. “So people remedy that by living in RVs and moving on every so often, which is understandable.”

In a world of limited options, Rudy’s living situation works OK for now. It’s not fun to think about moving every three days, but cops so far have let him be as long as he follows the rules, he said.

But still, he strives to have a plan he can call his own.

“There should be something (where) I can park and look for work and not have to worry all the time,” Rudy said.